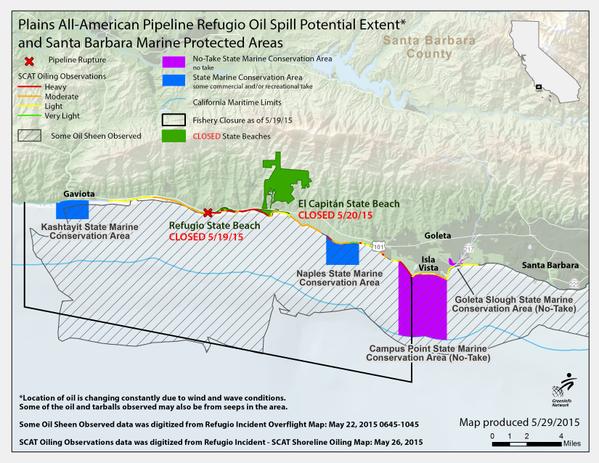 As the Santa Barbara Oil Spill fouls the controversial "marine protected areas" created under the privately-funded Marine Life Protection Act (MLPA) Initiative, Californians Against Fracking announced they will march with local residents at the site of the tragic spill to call on Governor Jerry Brown to stop fracking and "move California off dirty fossil fuels."

Following a disastrous 105,000-gallon oil spill that devastated fish and wildlife populations and closed down beaches, the group "Stand in the Sand" will gather in De La Guerra Plaza in Santa Barbara on Sunday, May 31 at 1 p.m. to show solidarity with local residents and organizations working on the front lines in response to the spill, according to a news release from Californians Against Fracking.

"Members of Californians Against Fracking, including Santa Barbara County Organizer for Food & Water Watch Rebecca Claassen, will be there to call on Gov. Jerry Brown to issue an emergency moratorium on unconventional oil extraction methods including on- and off-shore fracking, and move the state toward 100 percent renewable energy," according to the group. "Carrying a 90-foot long inflatable pipeline, the group will call attention to the governor and state regulators’ failure to protect California communities from the hazards of extreme oil and gas operations."

Four "marine protected areas" created under the MLPA Initiative are now imperiled by the oil spill that started at Refugio State Beach on Tuesday, May 20, when an oil pipeline owned by the Plains All-American Pipeline Corporation ruptured, devastating over 9 miles of the Santa Barbara County Coast.

Ironically, the "marine protected areas" threatened by the spill - the Goleta Slough, Campus Point, Naples and Kashtayit State Marine Conservation Areas - were created under the oversight of a Big Oil lobbyist. Yes, Catherine Reheis-Boyd, the President of the Western States Petroleum Association who is leading the campaign to frack California and eviscerate environmental laws, CHAIRED the MLPA Blue Ribbon Task Force to create so-called "marine protected areas" that don't protect the ocean from oil spills, offshore oil drilling and fracking!

More than 1,000 residents from all over California are expect to join the "Stand in the Sand" rally outside Santa Barbara City Hall, and then march to the waterfront where they will create a human barrier to symbolically stem the tide of expanding extreme oil extraction operations in the state. Community members wearing yellow T-shirts will link arms at the waterfront, where there will also be an inflatable pipeline and electric cars. For more information, go to: http://www.standinthesand.org/may31rally/

Stand in the Sand was created in response to the Gulf Oil Spill in 2010. The group is raising money to aid clean-up efforts in Santa Barbara.

You can view an eyewitness video on the oil spill by Madeline Stano of the Center on Race, Poverty & the Environment at: https://youtu.be/viIaT8bpqPc

Unfortunately, the LA Times, the Santa Barbara Independent and other mainstream and alternative media are failing to cover the real story behind the Refugio State Beach disaster - the fact that oil spills like this one are the inevitable result of the capture of the state and federal agencies by the oil and chemical industry.

We can't effectively address the Santa Barbara disaster without discussing the Marine Life Protection Act (MLPA) Initiative, a controversial "public-private partnership" between the California Department of Fish and Wildlife (CDFW) and the Resources Legacy Fund Foundation (RLFF) that was supposed to create a network of "marine protected areas" along the California coast.

During the MLPA Initiative process from 2004 to 2012, state officials and initiative advocates made sure that Big Oil and other corporate polluters weren't impacted by the creation of alleged "marine protected areas" along the California coast.

In an article published widely in June 2010, I warned that the "marine protected areas" created under the MLPA Initiative don't protect the ocean from oil spills and pollution. (http://yubanet.com/california/MLPA-Initiative-will-do-nothing-to-stop-a-big-oil-spill-off-California.php)

In violation of the provisions of the landmark Marine Life Protection Act (MLPA) of 1999, the "marine protected areas" failed to protect the ocean from oil spills, oil drilling, pollution, military testing, corporate aquaculture, military testing and all human impacts on the ocean other than fishing and gathering.

Of course, MLPA Initiative advocates neglected to address why Catherine Reheis-Boyd, the President of the Western States Petroleum Association in Sacramento, was allowed to not only chair the MLPA Blue Ribbon Task Force for the South Coast, but to sit on the task forces for the Central Coast, North Central Coast and North Coast, as well as on a NOAA federal marine protected areas panel. (http://www.dfg.ca.gov/marine/mpa/brtf_bios_sc.asp)

In yet another big conflict of interest, the WSPA President's husband, James Boyd, served on the California Energy Commission from 2002 to 2012. From 2007 to 2012, he served as the Commission's Vice Chair, the second most powerful position on the Commission! (http://www.energy.ca.gov/commissioners/boyd.html)

Unfortunately, as we can see from the current oil spill disaster off the coast of Santa Barbara, the state and federal regulatory agencies and the MLPA Initiative's so-called "marine protected areas" weren't able to prevent a big oil spill like the one now taking place from occurring - and the fishermen, Tribal members and grassroots environmentalists who criticized oil industry lobbyist oversight of the MLPA Initiative process were absolutely right about their fears that the highly-touted "Yosemites of the Sea" wouldn't protect the ocean.

This disaster could have been averted if the pipeline had an automatic shut-off valve, but it didn't, according to a Santa Barbara County official. Now you will see the federal and state regulatory agencies pointing fingers at each other as to who is to "blame" for the spill when it is the entire regulatory apparatus, now captured by Big Oil, that is really responsible for the spill.

To make matters worse, these same agencies, ranging from the Bureau of Safety and Environmental Enforcement (BSEE), the federal agency that permits offshore drilling, to the California Coastal Commission, failed to stop oil companies from fracking the ocean off California over 200 times over the past 20 years.

Plains All-American has had 175 incidents since 2006

The company that owns the pipeline involved in the major oil spill in Santa Barbara has had 175 incidents (mostly oil spills) nationwide since 2006, including 11 in California, according to a Center for Biological Diversity analysis of federal documents! (http://www.biologicaldiversity.org/news/press_releases/2015/santa-barbara-oil--spill-05-21-2015.html)

But ultimately, the people responsible for the Santa Barbara Oil Spill of 2015 are the state and federal officials who have allowed the oil industry to hijack what passes for "marine protection" in California - and who have let the oil industry get away with fracking the heck out of Southern California marine waters while engaging in very lax enforcement of environmental laws, including effective inspections of oil pipelines.

If the regulators had not been controlled by the regulated, this pipeline spill might have been prevented.

To read more about this scandal, go to my latest article: http://www.indybay.org/newsitems/2015/05/27/18772789.php and read my investigative piece in the East Bay Express about oil industry money and power in California at:http://www.eastbayexpress.com/SevenDays/archives/2015/02/06/big-oil-group-spent-89-million-last-year-lobbing-jerry-brown-and-california-officials

Take Action: Avaaz, a "global web movement to bring people-powered politics to decision making everywhere," is now calling California Attorney General Kamala Harris and local District Attorney Joyce Dudly to file civil and criminal charges against Plains All American and its CEOs in a petition campaign. This is a campaign that I strongly support: https://secure.avaaz.org/en/santa_barbara_oil_spill_loc/?bsDJDab&v=59399

Plains All American CEO Greg Armstrong raked in over $5 million in compensation last year and is guaranteed $29 - $87 million in golden parachute cash while oil from a rupture in his company's shoddy pipeline is fouling the beaches and ocean waters for 9 miles off the Santa Barbara County coastline.