Add an Event
Newswire
Calendar
Features
Home
Donate
From the Open-Publishing Calendar
From the Open-Publishing Newswire
Indybay Feature
Publish to Newswire
Add an Event
Related Categories: East Bay | Government & Elections | Police State & Prisons | Racial Justice | Womyn
Libby Schaaf orders OPD to crack down on nighttime protests and street marches in Oakland
by Davey D
Friday May 22nd, 2015 2:19 PM
5/21/15, 10pm: So tonight the Black women who organized the ‪#‎SayHerName‬ march in Oakland to bring attention to the scores of Black women being brutalized and terrorized by police were informed by OPD about a new PROTEST CURFEW.. Yes you read that right.. Oakland Police said there is a new protest curfew via Mayor Libby Shaaf 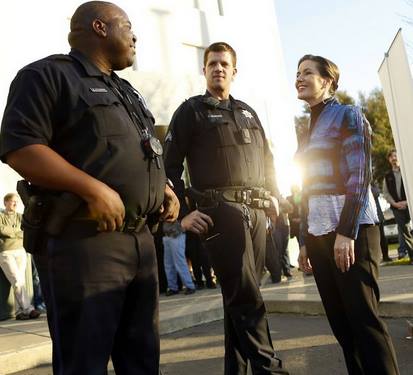 According to Cat Brooks who heads up the Anti Police-Terror Project Oakland police stopped them and informed them there is new ordinance that mayor Libby Shaaf had put in place and that there will be no night time protests.. Marches were warned to get on the sidewalk or risk arrest if they continued their protests..

According to Cat, the marches were followed and warned via loud speaker...Brooks also noted that she was told by an insider off the record, this was the first stage of a crack down..

Many upon hearing about this are questioning the legality of such an ordinance etc.. Some are saying this may be an extension of the Crowd Control policy. Others are saying that its impossible for the Mayor to enact an ordinance.. Others are saying OPD has misinterpreted things or is lying.. But as Brooks noted whether it has legal standing or not, OPD acted upon it and let folks know they'd be arrested if they didn't bounce.. "We got run off our own streets by OPD"

In terms of whats legal or not legal or unconstitutional or not.. Remember during Occupy when many said it was impossible for homeland Security to be working with City Hall etc? Remember when folks quotes case law and talked about how there was no way the Feds were working with the city?? Well history shows he coordinated nationwide take down of Occupy with DHS, local police and private security from banks.. So we shouldn't sleep on any of what went down last night..

As Brooks noted: "Black people demanding an end to the war on Black lives had war declared on them tonight by ‪#‎libbyschaaf‬"

Couple this latest intrusion along with the No BBQ signs by Lake and you can see the Anti-Black mission this city is on.. Wonder if our mayor is going to borrow a page from New York Mayor Michael Bloomberg and make OPD her own 'private army'.
http://hiphopandpolitics.com/
Add Your Comments
Support Independent Media
We are 100% volunteer and depend on your participation to sustain our efforts!