Add an Event
Newswire
Calendar
Features
Home
Donate
From the Open-Publishing Calendar
From the Open-Publishing Newswire
Indybay Feature
Publish to Newswire
Add an Event
Related Categories: Central Valley | Environment & Forest Defense
CDFW celebrates "Endangered Species Day" as it hastens species extinction
by Dan Bacher
Monday May 18th, 2015 10:49 AM
You just can't make this stuff up - a government agency like the California Department of Fish and Wildlife "celebrating" National Endangered Species Day when it appears to be doing everything it can to benefit agribusiness and other corporate interests at the expense of endangered species, along with a host of fish and wildlife species not formally listed under the federal and state Endangered Species Acts! 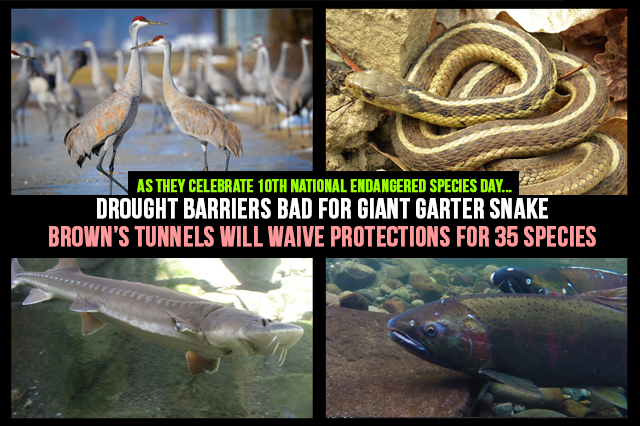 The California Department of Fish and Wildlife, the same agency that has presided over the collapse of winter run Chinook, Central Valley steelhead, Delta smelt, green sturgeon and other endangered and threatened species in recent years, on May 14 issued a press release proclaiming that "May 15 is the 10th National Endangered Species Day."

"The California Department of Fish and Wildlife (CDFW) recognizes the 10th National Endangered Species Day with a focused environmental concern," the Department stated. "The purpose of the Endangered Species Act is to conserve imperiled species and the ecosystems upon which they depend to prevent extinction."(https://cdfgnews.wordpress.com/2015/05/14/may-15-is-the-10th-national-endangered-species-day/)

Pointing out that there are 133 species listed under the federal Endangered Species Act in California, the agency claimed, "CDFW is paying special attention to priority listed species and other sensitive native wildlife that are in areas most severely affected by the drought. Emergency drought funds support projects that transferred water to critical fish and wildlife populations that might not have survived the continuing severe dry conditions without it. Examples of actions taken last year include the flooding of wetland habitats for giant garter snakes in State Wildlife Areas and the relocation of stranded salmon and steelhead."

However, the CDFW failed to mention a number of "inconvenient truths" about its "management" of endangered species in California.

First, it failed to point out that the Brown administration’s anti-fish and pro-agribusiness policies have resulted in pushing Delta fish populations closer to extinction

The Delta smelt, an indicator species that demonstrates the health of the Sacramento-San Joaquin River Delta, reached a new record low population level in 2014, according to the California Department of Fish and Wildlife's fall midwater trawl survey released this January. Department staff found a total of only eight smelt at a total of 100 sites sampled each month from September through December. (https://nrm.dfg.ca.gov/FileHandler.ashx?DocumentId=92840)

Then in April 2015, the Department found only one lonely fish in their Delta smelt survey. (http://www.mercurynews.com/drought/ci_27918392/california-drought-delta-smelt-survey-tallies-one-fish)

Second, the CDFW press release neglected to point out that poor water management by the state of federal governments has led to the lowest recorded return of Central Valley steelhead, a threatened species under the ESA, to the American River this year.

Nor did the release noted that 95 percent of the eggs and fry from the 2014 winter Chinook spawn perished in low, warm conditions, the result of poor oversight by the state and federal fishery and water agencies.

Fourth, as the CDFW was celebrating "National Endangered Species Day," it failed to acknowleged the Department’s failure to protect another listed species - the giant garter snake - in the Delta.

“The California Department of Fish and Wildlife (CDFW) states that the purpose of the Endangered Species Act is to conserve imperiled species and the ecosystems upon which they depend to prevent extinction," said Barbara Barrigan-Parrilla, Executive Director of Restore the Delta (RTD). “However, they are failing to successfully execute that mission with the present construction by the Department of Water Resources of the False River Barrier in the Sacramento-San Joaquin Delta."

The Department of Water Resources (DWR) constructed a 150 foot barrier about two weeks ago to “prevent” the giant garter snake from entering the construction staging area, according to Barrigan-Parrilla.

However, Bradford Island landowner Karen Cunningham documented that the snake would simply go around the entirely too-short snake barrier entering the constructing area as the perimeter of Bradford Island is seven miles, noted Barrigan-Parrilla. Cunningham now reports that she found what appears to be a giant garter snake on the road within twenty feet of the barrier worksite.

She attempted to locate a project biologist on site, but one was not present. Restore the Delta has reported this incident to California Fish and Wildlife’s Contra Costa County biologist.

“According to the Center for Biological Diversity website, more than 90 percent of the suitable habitat for giant garter snakes has been eliminated in California’s Central Valley, and only 13 isolated populations remain," observed Barrigan-Parrilla. "The cavalier attitude by the Department of Water Resources during the present construction of the drought barrier project for the Delta indicates what would happen to threatened species like the giant garter snake and endangered terrestrial and aquatic species during construction of Governor Brown’s massive twin tunnels project."

Fifth, the Department of Fish and Wildlife’s proposed "California Eco Restore" plan for the Delta will put 35 additional species in danger of extinction and will fail to restore Bay-Delta fisheries in the future.

Governor Brown and Fish and Wildlife Director Chuck Bonham continue to tell the public that the new pumps that would be part of the tunnels project would "fix" reverse river flows in the Delta, thereby "saving" Delta fisheries, according to Barrigan-Parrilla.

"Modeling results, however, found within their own planning documents show that there would be reverse flows in nearby sloughs and river branches just downstream from the tunnels, and that winter-run and spring-run juvenile Chinook salmon survival rates would be reduced sharply beyond their already dismal survival rate through the Delta," she said.

She said the California Water Fix is "no fix" for endangered and threatened species, as state agencies cannot properly protect species in the present during periods of construction in critical Delta habitats. (http://restorethedelta.org/101-california-water-fix-delta-tunnels-and-california-eco-restore/)

"California water and fishery agencies have failed to enforce laws to protect fisheries at the pumps over the last 30 years. Yet, the Brown administration continues to deliver false assurances regarding species protections with his tunnels project. It is time for Governor Brown to stop selling a project to Californians that will sacrifice Delta species and communities for the big agribusiness growers he favors on the west side of the San Joaquin Valley," she concluded.

You just can't make this stuff up - a government agency like the California Department of Fish and Wildlife "celebrating" National Endangered Species Day when it appears to be doing everything it can to benefit agribusiness and other corporate interests at the expense of endangered species, along with a host of fish and wildlife species not formally listed under the federal and state Endangered Species Acts!
Add Your Comments
LATEST COMMENTS ABOUT THIS ARTICLE
Listed below are the latest comments about this post.
These comments are submitted anonymously by website visitors.