Photo of Governor Jerry Brown after receiving a new bowl for his dog, Sutter, from leaders of the Association of California Water Agencies (ACWA) at their conference in Sacramento on May 6. Photo by Dan Bacher. 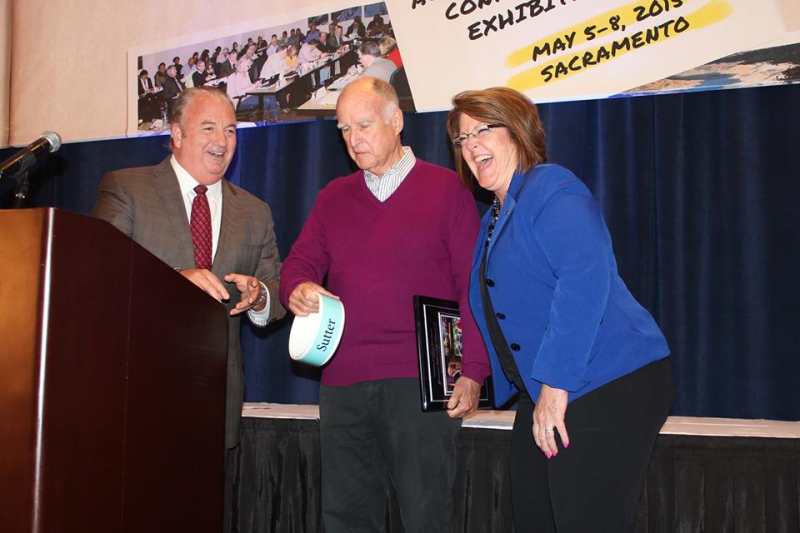 In a moment of candor during a speech he gave at the Association of California Water Agencies (ACWA) conference in Sacramento on May 6, Governor Jerry Brown told critics of his plan to build the twin tunnels to "shut up" unless they have spent a million hours working on the project like the state has.

Brown told the crowd, “I asked my water man sitting over there how many man and woman hours have gone into the Delta Project? Would you tell them? One million!"

"Until you've put a million hours into it, Shut Up!" said Brown, referring to critics of his tunnels and Delta policies.

"Let’s assume they wasted a quarter of the time,” Brown noted. “It’s still 750,000 man hours. That’s a lot of stuff...so it is complicated. On this subject we do want to be thoughtful and see what's going on here. We don’t have to do it just to have something to do."

"We’re happy doing this Delta project because for 50 years people have been trying to figure out how to deal with the fish, how to deal with conveyance of water (and) what's the most efficient way to do it that protects all the different interests that we got to think about," he stated.

And those weren't the only controversial things that Brown said in his rambling speech. Reverting from "Big Ag Brown" to "Governor Moonbeam" briefly, Brown talked about us being on "Spaceship Earth," how the astronauts recycled their urine and how "everything goes somewhere."

And he had the gall to spout this eco-babble while his administration has pursued some of the worst policies for fish, water and the environment in recent California history! (http://www.truth-out.org/speakout/item/30452-the-extinction-governor-rips-the-green-mask-off-his-tunnels-plan)

To watch the video of the speech by Gene Beley of the Central Valley Business Times, go to: http://www.centralvalleybusinesstimes.com/stories/001/?ID=28289 or https://player.vimeo.com/video/127131251

In response to the Governor's "Shut Up" comment, Tom Stokely, Water Policy Analyst for the California Water Policy Network (C-WIN), said, "Money and time spent on a deeply flawed project is still a useless exercise and a waste of ratepayer and taxpayer money."

"They've spent $240 million and have nothing to show for it other than a pile of documents 27 feet high," he stated. "The revised Bay-Delta Conservation Plan is an act of desperation to try and save a doomed project."

Barbara Barrigan-Parrilla, executive director of Restore the Delta (RTD), vowed, “We won’t go away. We won’t shut up. We can’t stand by and watch this project move forward because it will destroy the most important estuary on the West Coast of the Americas."

She said that the Governor "has his fingers in his ears" and won't listen to criticism.

"If people want to survive, they can't trust the Governor and staff, who have only spent a million hours on this project," Chief Sisk said. "The Delta has been dying since they've been doing what they've been doing - and they don't even know that it's dying."

During his speech, Brown quoted Edward O. Wilson, a preeminent biologist and naturalist, as he did before during his inaugural address this January:

"Surely one moral precept we can agree on is to stop destroying our birthplace, the only home humanity will ever have. The evidence for climate warming, with industrial pollution as the principal cause, is now overwhelming. Also evident upon even casual inspection is the rapid disappearance of tropical forests and grasslands and other habitats where most of the diversity of life exists. We are needlessly turning the gold we inherited from our forebears into straw, and for that we will be despised by our descendants."

Osha Meserve, an attorney for Delta agricultural and environmental interests, pointed out the irony of Brown proclaiming "small is beautiful" and quoting from a notable biologist about the need to preserve California and the planet for future generations while promoting an environmentally destructive project like the Delta tunnels.

"Rerouting the Sacramento River into massive tunnels is an outdated nineteenth century approach to water supply that will destroy the largest estuary on the west coast," said Meserve. "We have an obligation to future generations to come up with more effective, long-term solutions using state of the art science to meet our State’s water needs."

On April 30 at a press conference in Oakland, Governor Brown and federal officials unveiled their revised plans for Delta conveyance and ecosystem "restoration."

One major difference between the previous version of the BDCP and the latest incarnation is that it now calls for only "restoring" 30,000 acres for wetland and wildlife habitat - down from the 100,000 acres originally proposed.

"We've listened to the public and carefully studied the science," Brown claimed at the press conference, echoing his comments that he made regarding the tunnels plan at a news conference in Sacramento in July 2012.

However, as the Governor's call for tunnels critics to "Shut Up" demonstrated, Brown neither listened to the public nor carefully studied the science. Every group of scientists that has reviewed the plan, ranging from the Delta Independent Science Board to the federal Environmental Protection Agency, has slammed the terminally flawed "science" behind the tunnels.

There is no doubt that the tunnels will hasten the extinction of Sacramento River Chinook salmon, Central Valley steelhead, Delta and longfin smelt, green sturgeon and other species, as well as threatening the salmon and steelhead populations on the Trinity and Klamath rivers.

While the Brown administration has mandated that urban families slash their water usage by 25 percent, California almond growers have expanded their almond acreage from 870,000 acres to 1,020,000 acres during the current drought. That's a 150,000 acre increase in acreage for almonds, a water-intensive crop, since the drought began. (http://www.nass.usda.gov/Statistics_by_State/California/Publications/Fruits_and_Nuts/201504almac.pdf)
Add Your Comments
LATEST COMMENTS ABOUT THIS ARTICLE
Listed below are the latest comments about this post.
These comments are submitted anonymously by website visitors.