Add an Event
Newswire
Calendar
Features
Home
Donate
From the Open-Publishing Calendar
From the Open-Publishing Newswire
Indybay Feature
Publish to Newswire
Add an Event
Related Categories: California | International | San Francisco | U.S. | Racial Justice
Demonstration at Mission Dolores Opposes Sainthood for Junipero Serra
by Alex Darocy (alex [at] alexdarocy.com)
Monday May 4th, 2015 10:06 PM
On May 2, Native American community members and Interfaith supporters, including clergy leaders, demonstrated outside of Mission Dolores in San Francisco to oppose the impending canonization of Junipero Serra by the Catholic church. Pope Francis has reaffirmed his decision to name Junipero Serra a saint, despite strong opposition from Native Americans who say the man is responsible for the killing of hundreds of thousands of Indigenous people when he helped to establish and then presided over the California mission system in the 1700s. "My ancestors were directly enslaved at Mission Dolores here, and at Mission San Jose in Fremont, and I want to make sure that the Vatican knows that we, and Native people allies, do not agree with the canonization of Junipero Serra," said Corrina Gould, who is of Karkin and Chochenyo Ohlone ancestry. Individuals of Coastal Miwok and Chumash ancestry, two other Californian tribal groups gravely affected by the establishment of the mission system, also spoke at the demonstration. [Top photo: Demonstrators rally in front of Mission Dolores. Scroll down for more photos.] 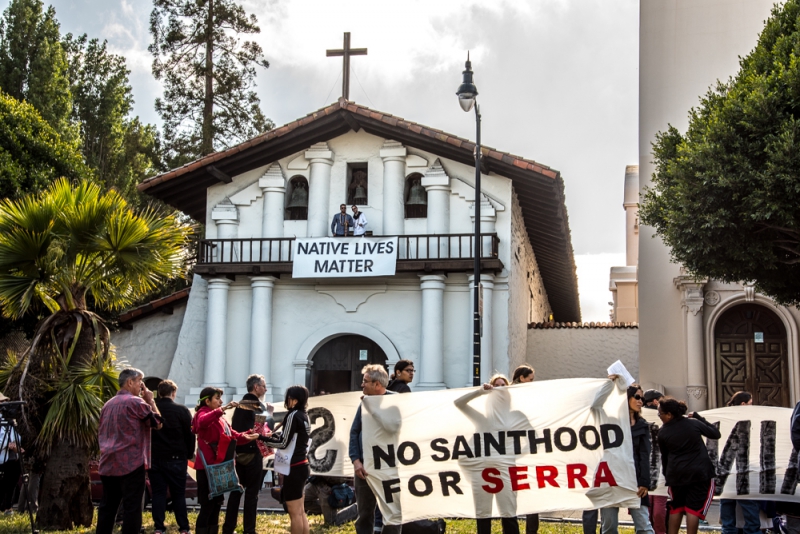 original image (1000x668)
The event was part of an "International Day of Mourning" which was organized to coincide with the Catholic church's celebration to honor Juipero Serra in Rome and at the American seminary in Los Angeles on May 2.

In front of Mission Dolores, demonstrators displayed a number of large banners emblazoned with the statement, "No Sainthood For Serra."

Informational flyers were offered to those visiting the Mission, and included direct quotes from Serra himself.

Two quotes were taken from Junipero Serra’s response to Spanish King Carlos III’s request in 1780 that the California missions free the Indians, give them legal representation, and stop whipping them.

Serra explained to the Spanish king that, "...spiritual fathers should punish their sons, the Indians by blows... I don't see what law or reasoning my Indians should be exempt from being whipped." Serra also wrote that, "We can not free the Indians, relinquish directing their future, or give up the authority to use punishment."

Another quote demonstrators shared was from taken from a letter written by Serra to Spanish commander Moncada, requesting that a group of four Indians who attempted to escape Carmel Mission several times in 1775 be punished.

In that letter, Serra requested, “… two or three whippings which Your Lordship may order applied to them… If your lordship does not have shackles, with your permission they may be sent from here [San Carlos Mission]. I think the punishment should last one month.”

Corrina Gould introduced a number of individuals who spoke to the horrors committed in the California mission system under the administrative leadership of Serra.

Theresa Harlan, who is of Coastal Miwok ancestry, stated, "The only miracle in my mind is that he made hundreds of thousands of Native Americans disappear."

"If this is sainthood," said another one of the speakers, "then who the hell are the rest of the saints?"

Wicahpiluta Candelaria, who is of Rumsen Ohlone and Apache ancestry, sang Ohlone songs and played a clapper stick at the demonstration, with the accompaniment of several others. The players included his young son, Yoscolo, who he said was named after a Yokut Indian who led raids against Mexican settlers and liberated several hundred Indians from Mission Santa Clara in the 1830s.

When Candelaria spoke, he said the demonstration was about acknowledging the effects of Junipero Serra, who he called a "monster," but also emphasized that people, "should be talking more about Yoscolo than Serra."

Candelaria explained that when Indigenous Californians feel pain in response to the naming of Serra as a saint, they are experiencing a "double layer of trauma," because they are still feeling the devastating effects of colonization. When individuals push for the canonization of Junipero Serra, they are "erasing the true stories" of what happened at Mission Dolores, he said.

Access to documents that reveal the brutal reality of "life" at the missions is still restricted by the the Catholic church, Candelaria said, which reveals the enormous power the system continues to exert over Indigenous Californians today.

"The missions are dividing our people by holding back the access to information," he said. "Some people are held as credible Ohlones, or not, because of access to that information."

The Vatican has actively promoted the idea that Serra will be the first "Hispanic" saint in the United States, but speakers at the demonstration discussed how that assertion has mislead and divided Ohlones, Catholics, and Latinos alike, many of whom have blended ancestries due to colonization.

When Ohlone elder Ruth Orta addressed the group at the demonstration, she began by saying that she was, "one unhappy Catholic."

"This is a really complex issue," Corrina Gould said. "There are a lot of people that are California Indians that are Catholic because of the colonization that has happened here."

"This isn't about Catholicism, this is about a human right," Gould said. "That we have the right as sovereign nations to stand on our own land and make our own determinations about who we are and who we pray to."

"So what we want to do today, is we want to stand together in an interfaith way to say prayers for the ancestors who died here, who died because of the colonization of the Catholic Church," she said.

In defending the canonization of Serra, the Vatican has made statements claiming the European colonization of North American was "inevitable." The Pope himself has called Serra a "founding father" of America.

“He was one of the founding fathers of the United States, a saintly example of the Church’s universality and special patron of the Hispanic people of the country,” Pope Francis was quoted as saying during the May 2 Catholic celebration of Serra.

In California, the history of the mission system is taught as part of the standard curriculum in public schools, but it is far from an accurate portrayal of what actually happened, according to demonstrators at the Dolores Mission.

"The State of California teaches us the missions are cool," Corrina Gould said.

A consistent theme emphasized by speakers at the demonstration was the importance of changing the public's perception of the missions.

Speaker Monique Sonoquie, who is of Chumash ancestry, recommended people, "go into your schools, educate those teachers."

A plaque on Mission Dolores notes that the building is located along El Camino Real, and an inscription from 1963 states, "This plaque is placed on the 250th anniversary of the birth of California's apostle Padre Junipero Serra O.F.M. to mark the northern terminus of El Camino Real as Padre Serra knew it and helped to blaze it."

El Camino Real is Spanish for "The Royal Road" and it is also known as "The King's Highway" or "The California Mission Trail." The 600-mile path historically connected California's 21 missions, four presidios, and three pueblos, which stretched from San Diego to Sonoma County. In actuality, any road controlled by the Spanish crown was called a "camino real."

Many accounts detail the brutality that was inflicted on Indigenous people at Mission Dolores. In the book "Indians of California: The Changing Image" author James J. Rawls writes that, "San Francisco Mission [Dolores] in 1797 used red hot iron to burn crosses into the faces of a group of men, women, and children who tried to escape the mission."

Descriptions of brutality can be found in Native responses to an inquiry directed by California Governor Don Diego. The following statements were given to Spanish soldiers by Indians who answered the question, “why did you leave Mission San Francisco?”

“My wife and daughter died, and on five separate occasions Father Danti ordered me whipped because I was crying. For this reason I fled,” Tibucio said.

“My motive for fleeing was that my brother died on the other shore, and when I cried for him at the mission they whipped me. Also the alcade Valeriano hit me with a heavy cane for having gone to look for mussels at the beach without Raymundo’s permission,” Homobono said.

“My mother, two brothers, and three nephews died, all of hunger. I left so I would not die also," Liborato said.


For more information about the canonization of Junipero Serra, see the Facebook group No Sainthood for Serra:
https://www.facebook.com/groups/414542932042603/ 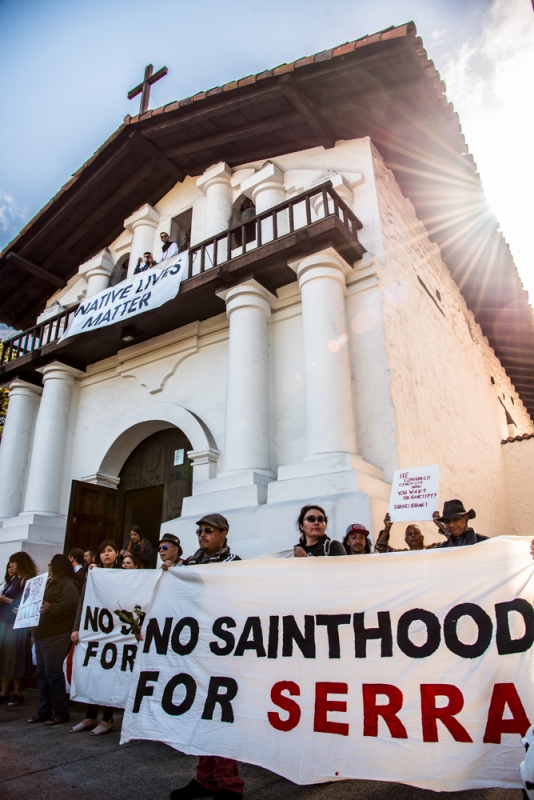 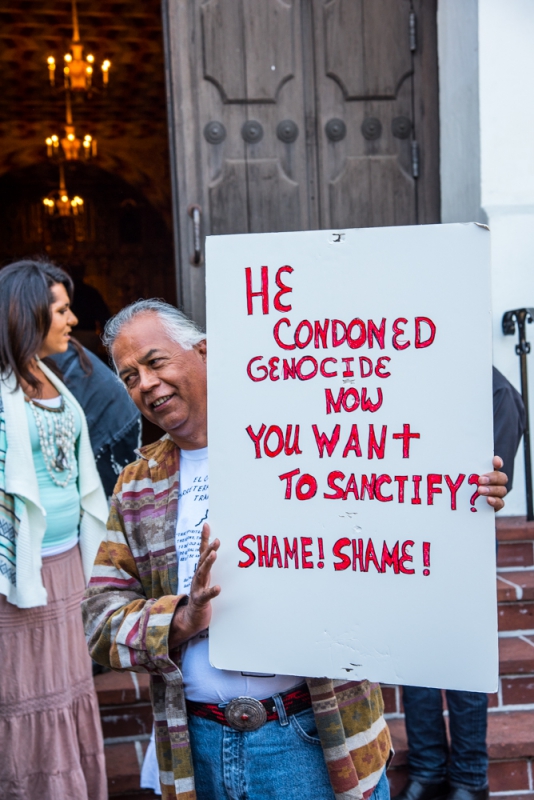 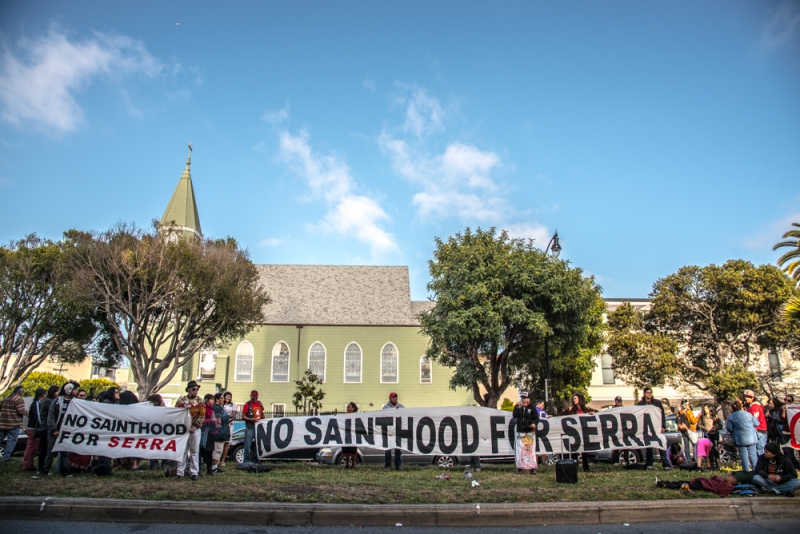 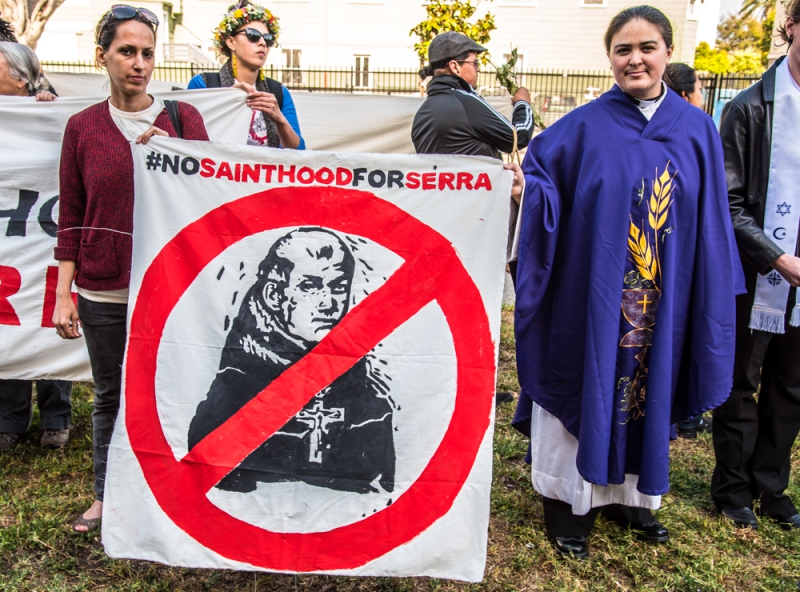 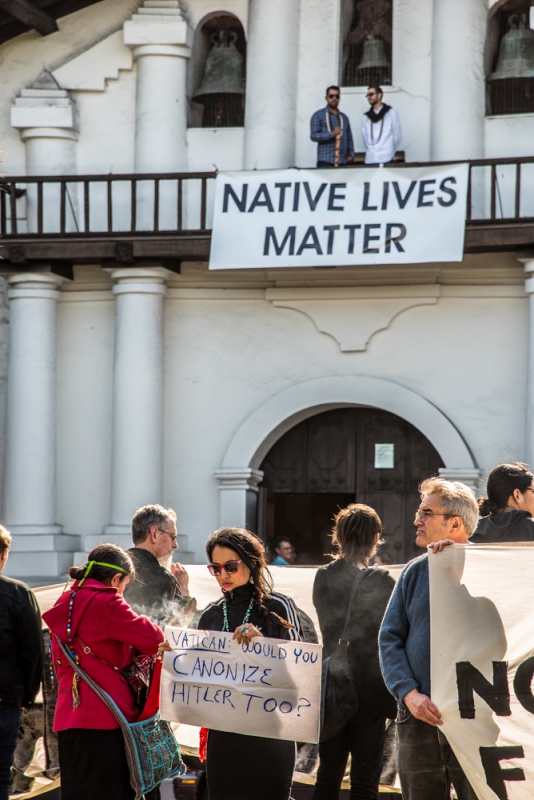 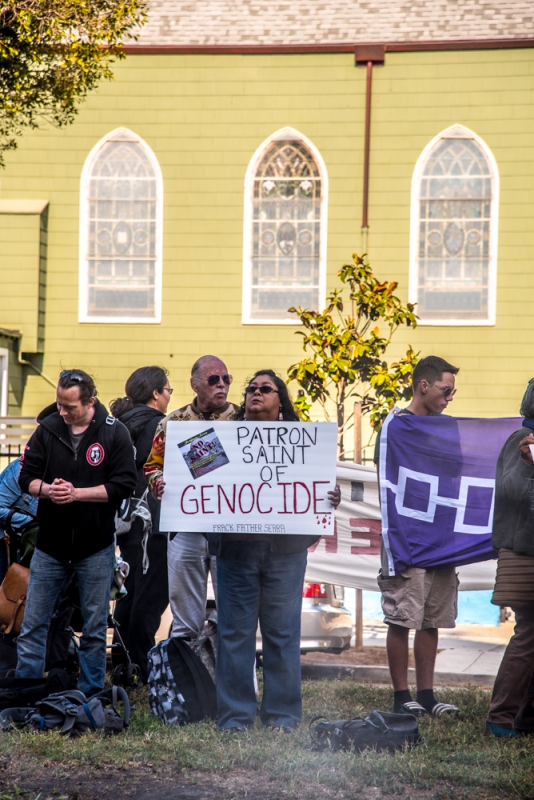 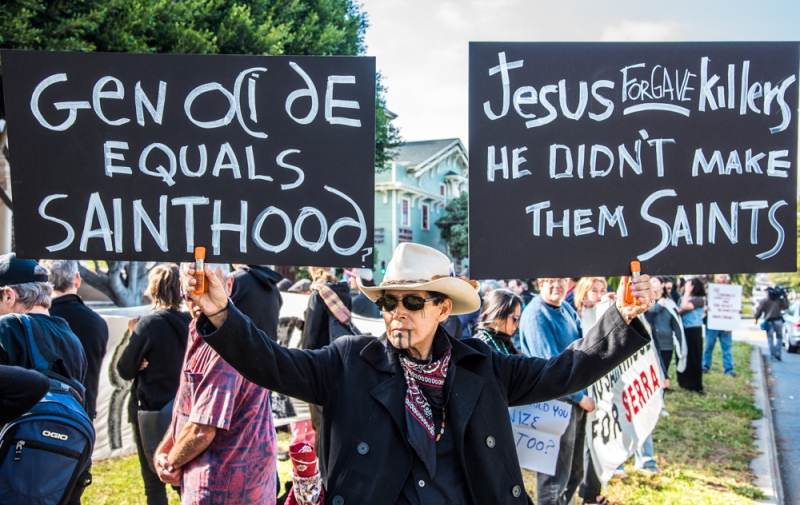 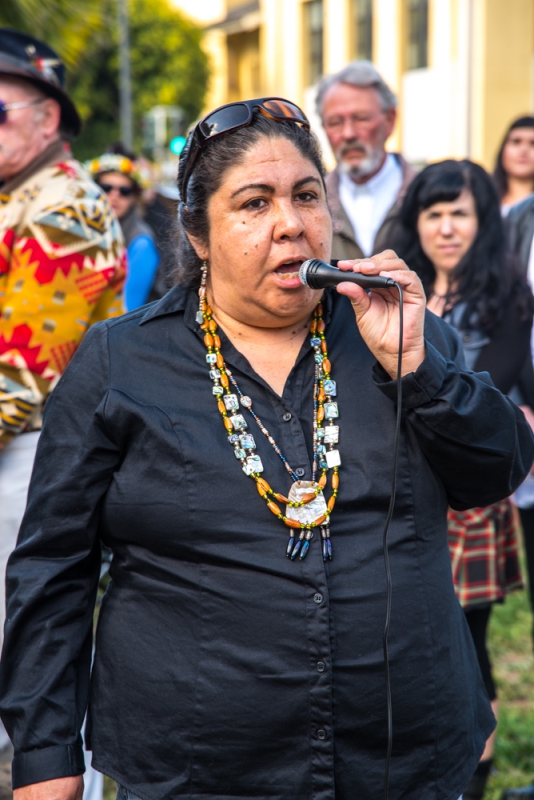 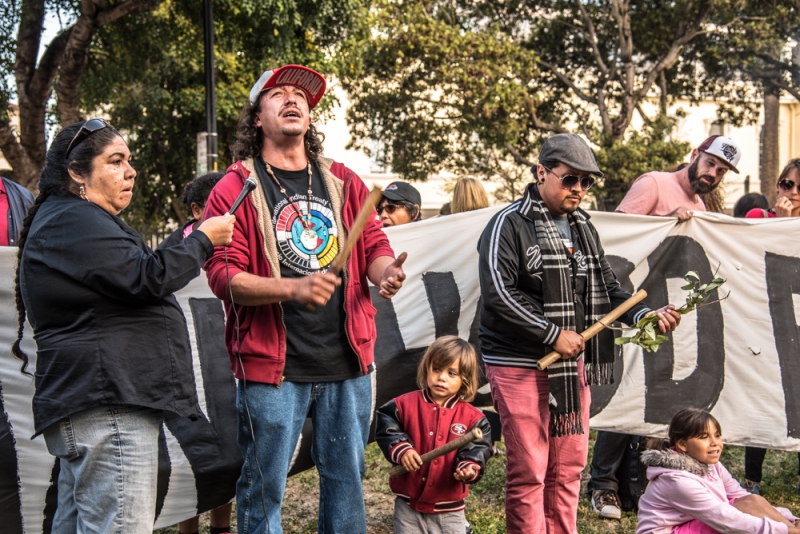 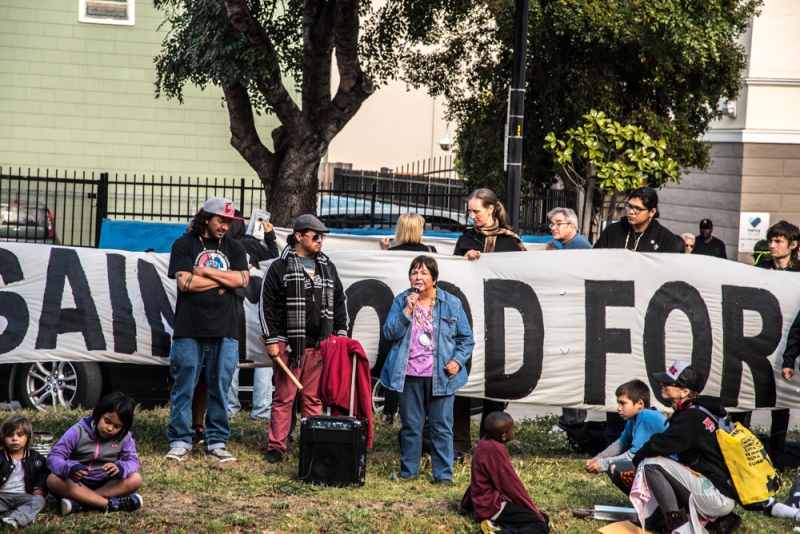 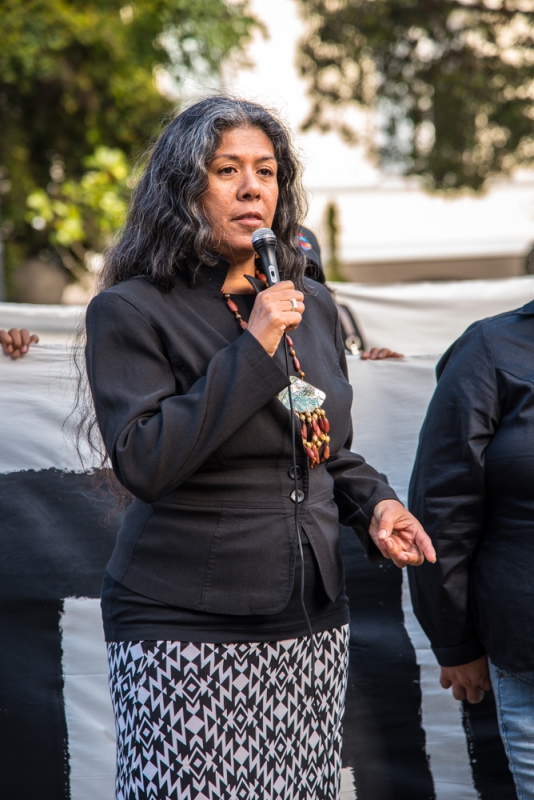 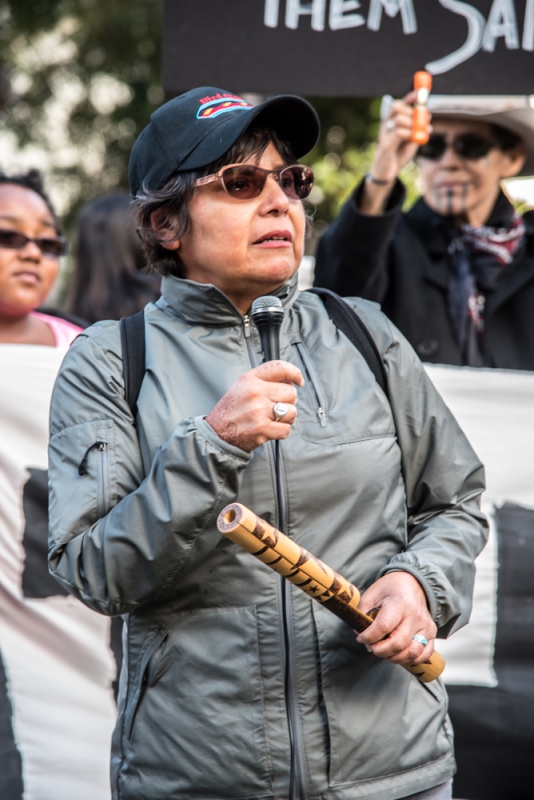 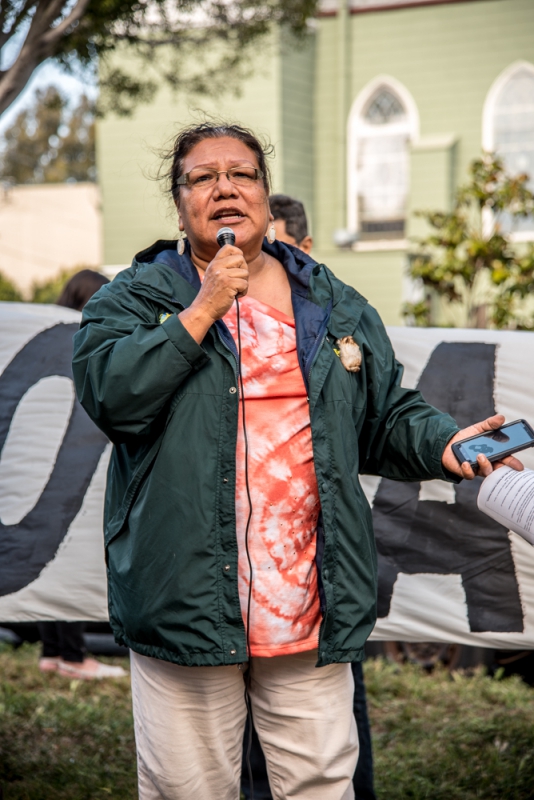 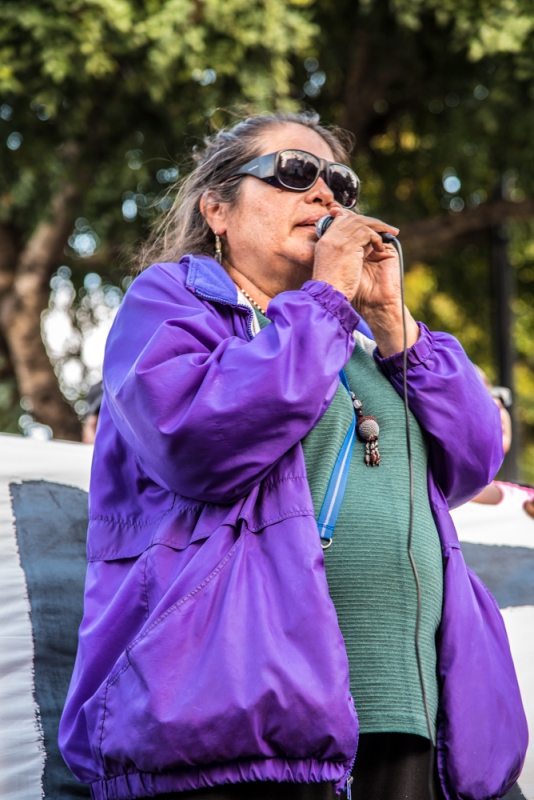 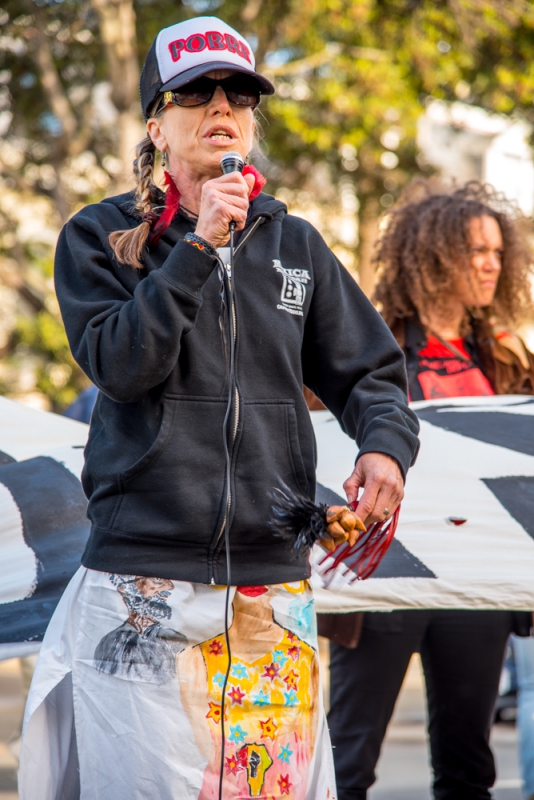 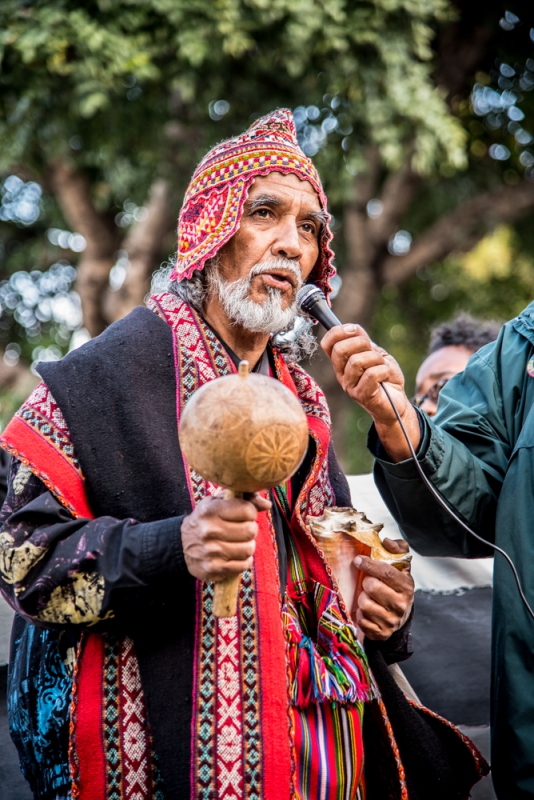 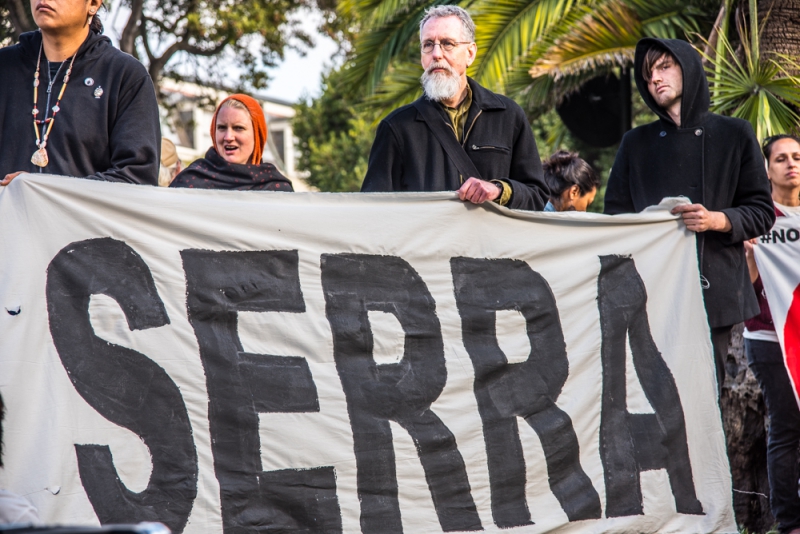 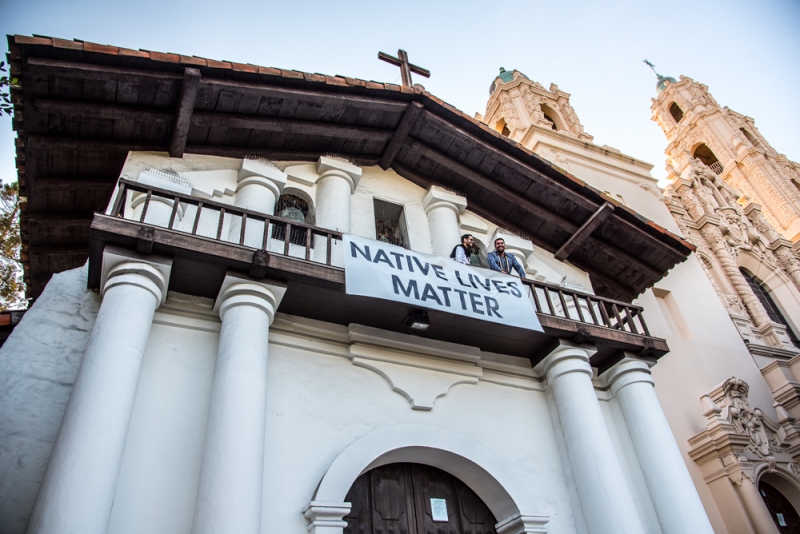 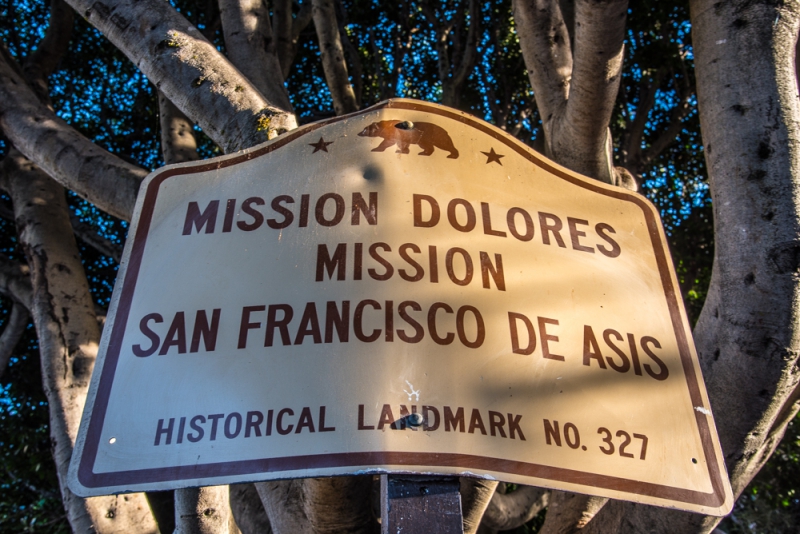 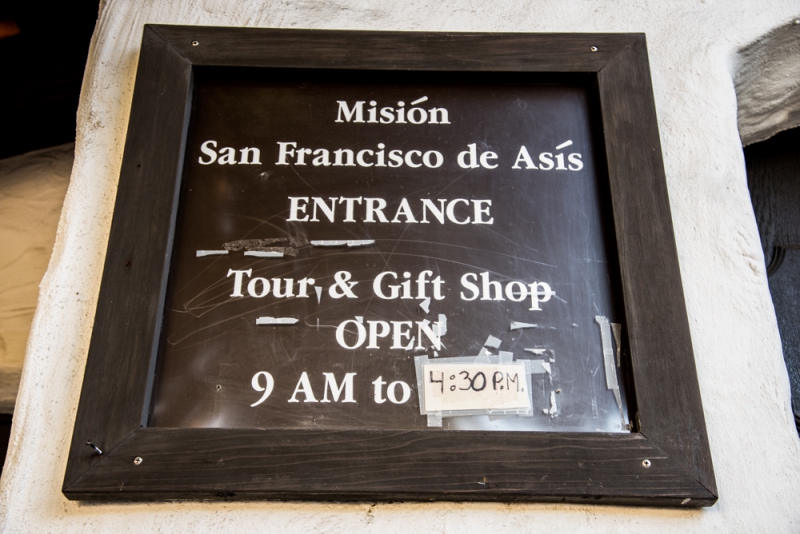 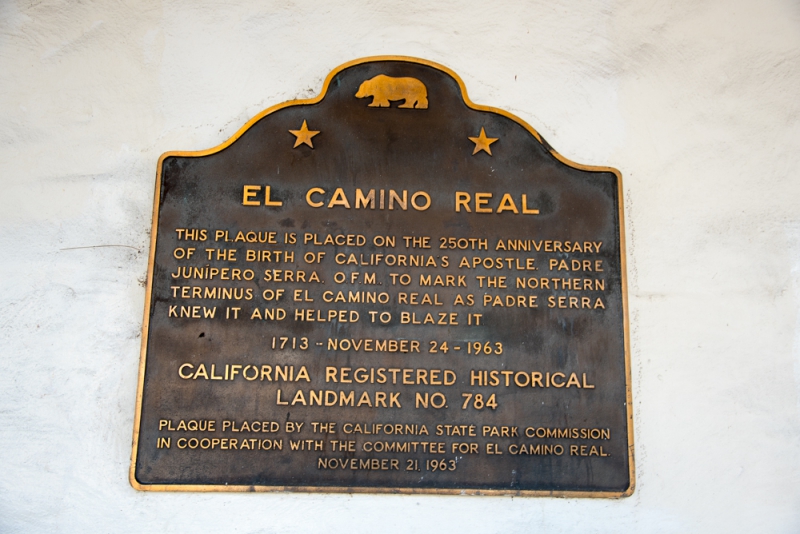 original image (1000x668)
El Camino Real plaque.
Add Your Comments
LATEST COMMENTS ABOUT THIS ARTICLE
Listed below are the latest comments about this post.
These comments are submitted anonymously by website visitors.