In the the middle of April, 2015, a post went up on indybay.org for an early morning action to block the tech buses at the MacArthur BART station. The date of action was set for May 1st, or International Workers Day. This holiday commemorates the execution of several Chicago anarchists in 1886. These men fought for the eight-hour day, a meager goal that would allow workers to have a little time for themselves. For their efforts, the state sentenced these anarchists to death. 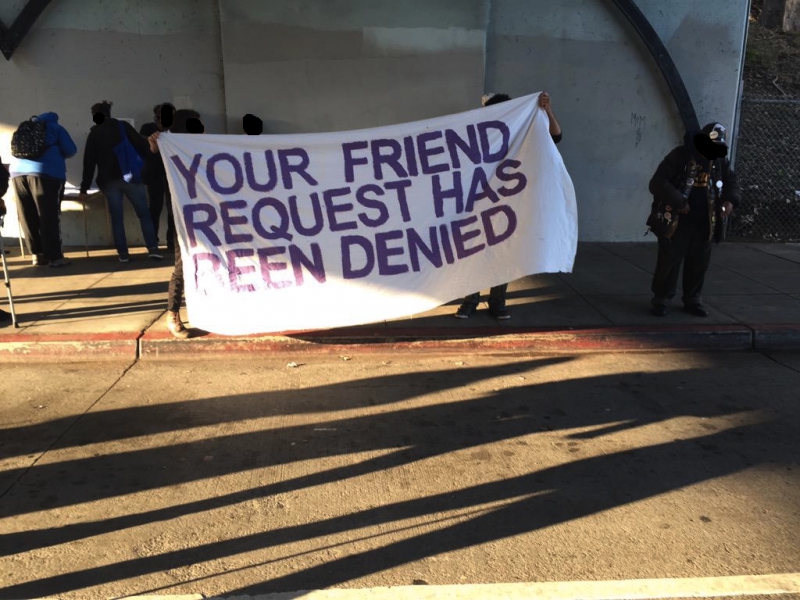 The initial post on indybay.org was then posted on Facebook. After two weeks, over four hundred people said they would attend the MacArthur blockade. As May 1st drew closer, the mainstream media got wind of the event and began running articles on the internet. Just before the blockade was to take place, a friendly Google employee informed us that Google had canceled its buses for May 1st, but that one particular bus would still run that day. It was the bus stop near the park-and-ride on 7th and Adeline in West Oakland. Google employees who live in the Contra Costa suburbs park their cars near this bus stop and then hitch a ride down to Mountain View. If this bus stop could be blockaded as well, the Google bus routes in the East Bay would be completely shut down.

Just before May 1st, the Teamster’s local that represents Facebook shuttle bus drivers released a statement and a poster pleading for people not to block the tech commute. It is unclear why these workers would fight to work on May 1st, but such is the state of things.

At 7:30 AM on the morning of May 1st, 2015, a group of people were already gathered at MacArthur BART. They clumped together under the freeway where the tech buses usually pick up their passengers. The media was circling overhead with at least two helicopters. Cops and sheriffs patrolled in wide circles, unsure of what was going to happen. A contingent of BART riot police was also standing inside the station. Over the next hour, over two hundred people came through the area. During that time, only one Facebook bus tried to sneak into the bus stop. After that, it was clear the tech commute had been canceled. All it took was the intention and the follow through.

While eyes were elsewhere, about a dozen antagonists converged on 7th Street to block the Google buses that were re-routed from the MacArthur BART Station. Despite a high security presence, hired by Google, one bus was blocked for several minutes until police arrived and escorted it away from the stop. No employees were able to board this bus. After that, no buses stopped and many employees wondered how long they would have to wait. As time passed, most Google employees ended up going home, and eventually the crowd dispersed when it was clear there were no one left for the buses to pick up.

In conclusion, we would like to present the film below to everyone interested. It is our full statement, explaining what we are fighting against and why. Some people decry any antagonism towards techies, saying that they are workers too, or everyone is free to do what they like. Our video will explain why this is not so. We will not use our own words to explain our case. The voices of others is sufficient for that purpose. The truth is evident.

THE INVISIBLE COMMITTEE
§"Fuck Off, Google" documentary
by Invisible Committee Saturday May 2nd, 2015 11:33 AM
Copy the code below to embed this movie into a web page:
Download Video (123.3MB) | Embed Video
(video 54:19) 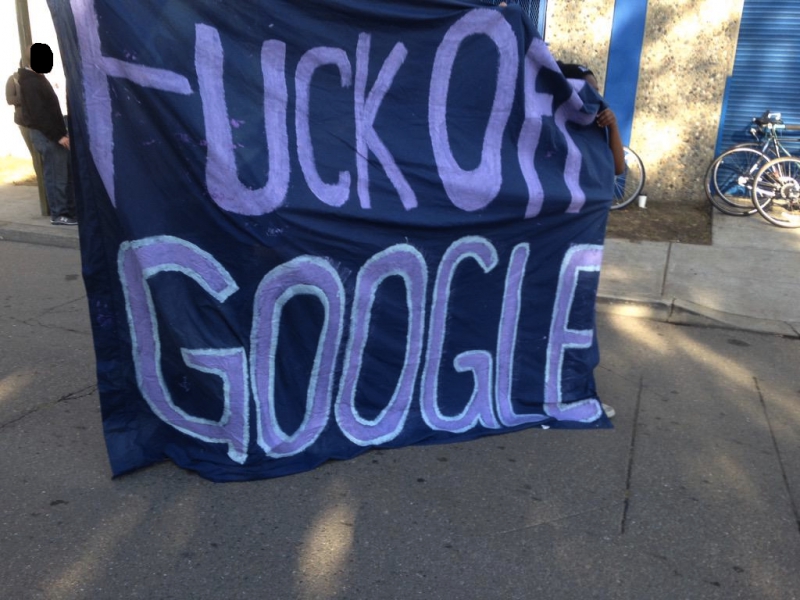 §fuck off google!
by fuck off google!
Friday May 1st, 2015 3:59 PM
https://vimeo.com/126641539
Add a Comment
§anonymous
by anonymous
Friday May 1st, 2015 5:21 PM
And the tech worker's response to this was, 'well at least we still got paid today'. Why? Those workers are salaried with flexible schedules.
Add a Comment
§May Day rally fails to block tech bus in Oakland
by owned
Saturday May 2nd, 2015 11:15 AM
well, your original plans got totally wrecked but.. hey at least you blocked one bus right? lol

"The sole tech shuttle that showed up at an Oakland protest intended to blockade them rolled away unhindered after picking up a single passenger.

Onlookers and media outnumbered the demonstrators, who for the most part stood solemnly under the highway holding signs with messages such as 'Die Techie Scum' and 'Your Friend Request Has Been Denied.' A few passing cars honked in support. A plan to swarm the entrance of the BART station was never realized."

http://www.sfgate.com/business/article/May-Day-rally-fails-to-block-tech-bus-in-Oakland-6236310.php
Add a Comment
§failed? you wish
by truth be told
Saturday May 2nd, 2015 11:25 AM
neither google nor yahoo nor apple or other tech giants were able to utilize the private "bus stop" that they pay nothing to the public for at macarthur bart.

the stated goal of the action was to shut down the tech buses there on May 1st and that mission was clearly accomplished.

plus activists got a ton of press coverage to amplify their message, including several stories in the chron, one of which you link to here, inadvertently making the point of how successful the action actually was.
Add a Comment
Support Independent Media
We are 100% volunteer and depend on your participation to sustain our efforts!