Add an Event
Newswire
Calendar
Features
Home
Donate
From the Open-Publishing Calendar
From the Open-Publishing Newswire
Indybay Feature
Publish to Newswire
Add an Event
Related Categories: California | Environment & Forest Defense
Recovery Plan for California Tiger Salamander Calls for Protection of 34,000 Acres
by Center for Biological Diversity
Friday Apr 24th, 2015 7:35 PM
LOS ANGELES— In accordance with a settlement with the Center for Biological Diversity, the U.S. Fish and Wildlife Service today released a draft recovery plan (see PDF) for the endangered Santa Barbara County population of the California tiger salamander. The plan calls for purchase and permanent protection of up to 34,000 acres of the salamander’s breeding ponds and adjacent uplands. 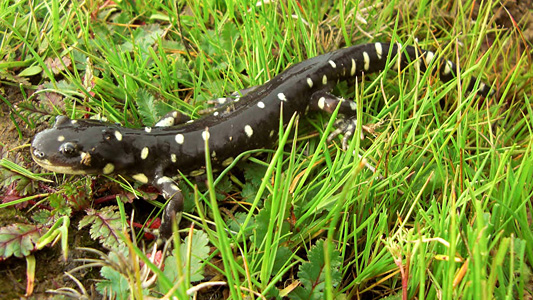 “I’m so glad the Service has finally developed this plan to recover this population of California tiger salamanders,” said Jenny Loda, a biologist and attorney with the Center dedicated to protecting rare amphibians and reptiles. “Time’s running out for these rare amphibians, so we urgently need a roadmap to guide the actions needed to ensure the species will survive.”

The recovery plan focuses on alleviating the threat of habitat loss and fragmentation by permanently protecting breeding ponds and their adjacent uplands through acquisition and conservation easements. Because the majority of the remaining habitat for the Santa Barbara County California tiger salamander is on privately owned lands, habitat-based conservation efforts will require the cooperative efforts of both local agencies and private partners.

“Because we’ve already destroyed so much of their natural habitat, recovering and protecting the places these unique tiger salamanders need to survive won’t be easy,” said Loda. “But we can’t afford to lose this special amphibian, so I hope federal, state and local agencies as well as developers will all step up to support the hard work of recovery.”

Although Santa Barbara California tiger salamanders have been protected under the Endangered Species Act for more than a decade, the Fish and Wildlife Service had not developed a required recovery plan to guide management of the species. In April 2012 the Center sued the Interior Department for its failure to develop such a plan for the endangered salamanders; the plan released today is the result of the December 2012 settlement agreement that resulted from this lawsuit.

Recovery plans are the main tool for identifying actions necessary to save endangered species from extinction and eventually remove their protection under the Endangered Species Act. Research by the Center has found that the status of species with dedicated recovery plans for two or more years is far more likely to be improving than of those without.

The Fish and Wildlife Service is accepting public comment on the draft plan for 60 days. Under the settlement, the Santa Barbara population of California tiger salamander will receive a final plan by December 2016.

The California tiger salamander (Ambystoma californiense) is a large, stocky, terrestrial salamander with a broad, rounded snout and gorgeous black-and-yellow body. These amphibians are restricted to vernal pools and seasonal ponds in grassland and oak savannah communities in central California. The primary cause of their decline is the loss and fragmentation of habitat through human activities and encroachment of nonnative predators.

For more information about the Center’s campaign to stop the amphibian and reptile extinction crisis, please visit http://BiologicalDiversity.org/herps. 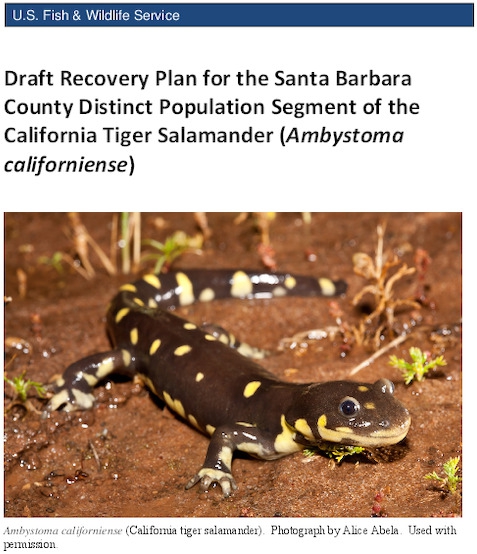 Download PDF (5.0MB)
Add Your Comments
Support Independent Media
We are 100% volunteer and depend on your participation to sustain our efforts!