Add an Event
Newswire
Calendar
Features
Home
Donate
From the Open-Publishing Calendar
From the Open-Publishing Newswire
Indybay Feature
Publish to Newswire
Add an Event
Related Categories: California | Central Valley | San Diego | Environment & Forest Defense | Government & Elections
A whale of a conflict of interest: Big oil lobbyist's oversight of marine protected areas
by Dan Bacher
Thursday Apr 9th, 2015 5:00 PM
The Western State Petroleum Association President's role as Chair of the MLPA Blue Ribbon Task Force for the South Coast is undoubtedly one of the most overt conflicts of interest in recent years, but it's just one example of the conflicts of interests that infest environmental politics in California. 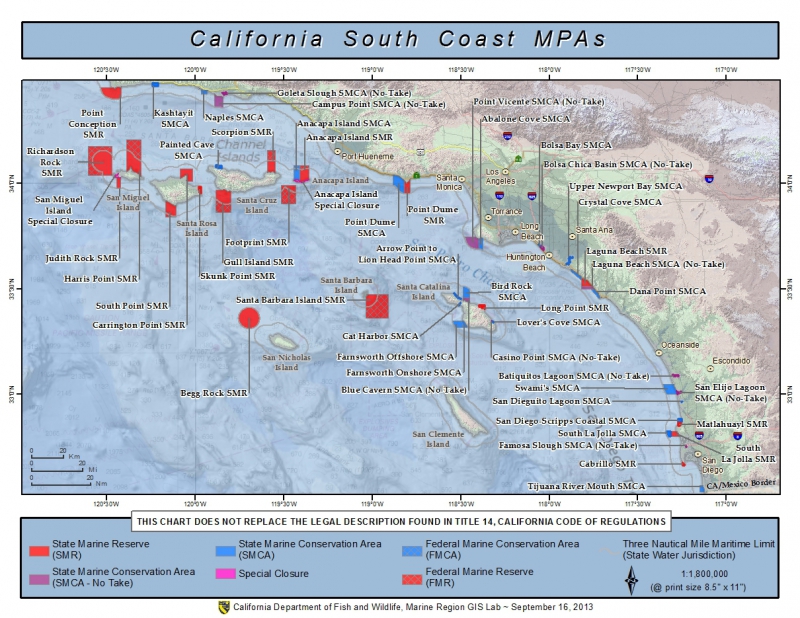 During the period from 2004 to 2012, she also served on the task forces for the Central Coast, North Central Coast and North Coast. Under her leadership, she and other corporate interests made sure that oil industry operations, including fracking operations in Southern California waters, weren’t impacted at all by the creation of so-called "marine protected areas."

In the violation of the provisions of the Marine Life Protection Act of 1999, these "marine protected areas" fail to protect the ocean from fracking, oil drilling, pollution, military testing, corporate aquaculture and all human impacts on the ocean other than sustainable fishing and gathering.

Reheis-Boyd’s presence on both state and federal marine protected area panels is very alarming when you consider that Reheis-Boyd is the head lobbyist for fracking and offshore oil drilling in California, as well the leading opponent of Senate Bill 350, legislation to reduce gasoline and diesel use 50 percent in California by 2030.

For example, in her latest post on the WSPA blog, Reheis-Boyd slammed Senate Bill 350, warning of the “drastic and devastating impact” that the bill would supposedly have on California. (https://www.wspa.org/blog/post/wspa-president-weighs-sb-350-hearing-senate-energy-committee)

“The Western States Petroleum Association and its members have joined a number of business and community groups in opposition to Senate Bill 350, a bill that proposes a 50 percent reduction in gasoline and diesel use by 2030. In the absence of available and affordable alternatives, we believe such a step would have a drastic and devastating impact on California’s economy, businesses, and families statewide,” said Reheis-Boyd.

Her presence on the state and federal marine protected areas panels is a classic case of the “fox guarding the hen house” – and how big money purchases political power in California and the U.S.

"How can this continue to be overlooked and allowed? Where is the public on these things?" asked Chief Sisk. "When will the public refuse to accept this outright WRONG? The Mega Corporations have loop holes to provide funding and personnel to government to run their billion dollar destructive project through. It is so sad the public has no recourse because they are held hostage and want the two bit jobs!"

The Western States Petroleum Association (WSPA) that Reheis-Boyd heads is the most powerful corporate lobbying organization in Sacramento.

The oil industry continued its long reign as the top spender on lobbying in California in 2014, according to data released by the California Secretary of State. The Western States Petroleum Association led the list with $8.9 million spent on lobbying in 2014, nearly double what it spent in the previous year. WSPA spent $4.67 million in 2013. (http://www.eastbayexpress.com/SevenDays/archives/2015/02/06/big-oil-group-spent-89-million-last-year-lobbing-jerry-brown-and-california-officials)

From July 1 to September 2014 alone, the oil industry spent an unprecedented $7.1 million lobbying elected officials in California with a major focus on getting oil companies out of a major clean air regulation.

The oil industry has spent over $70 million on lobbyists in California since January 2009, according to a 2014 report written by Will Barrett, the Senior Policy Analyst for the American Lung Association in California. (http://www.lung.org/associations/states/california/advocacy/climate-change/oil-industy-lobbying-report.pdf)

The Western States Petroleum Association (WSPA) topped the oil industry spending with a total of $31,179,039 spent on lobbying since January 1, 2009 at the time of Barrett’s report. Chevron was second in lobbying expenses with a total of $15,542,565 spent during the same period.

Backed by millions of dollars from the oil industry, Reheis-Boyd led the successful campaign in 2013 by the oil industry to defeat all one bill to ban or regulate the environmentally destructive practice of fracking. The oil industry added last minute amendments to Senator Fran Pavley's already weak legislation to regulate fracking in California, Senate Bill 4, making an already bad bill even worse. Governor Jerry Brown signed the legislation, dubbed by environmentalists the "green light for fracking" bill, on September 20.

Her organization also helped defeat legislation in 2014 to remove a loophole in state law that allows the oil industry to drill on the Tranquillon Ridge, threatening the Vandenberg State Marine Reserve that the same Reheis-Boyd and other MLPA Initiative Blue Ribbon Task Force Members oversaw the creation of! The bill, SB 1096, would have protected the Vandenburg State Marine Reserve and the rest of the Tranquillon Ridge from offshore oil drilling plans.

The California Coastal Sanctuary Act, passed in 1994, contains a loophole from the offshore extraction prohibition, Public Resources Code 6244, by allowing new oil leases if the “State Lands Commission determines that oil and gas deposits contained in tidelands are being drained by means of wells upon adjacent federal lands and leasing of the tidelands for oil or gas production is in the best interest of the State.”

SB 788 would eliminate this loophole by repealing PRC 6244 to ensure that the Coastal Sanctuary Act and Marine Life Protection Act are able to provide their intended protections for our coastal resources and prevent additional offshore oil extraction.

You can expect the Western States Petroleum Association and the oil companies to strongly oppose SB 788.

Big Oil also exerts its power and influence by spending many millions of dollars every election season on candidates and ballot measures. For example, the oil industry dumped $7.6 million into defeating a measure calling for a fracking ban in Santa Barbara County and nearly $2 million into an unsuccessful campaign to defeat a measure banning fracking and other extreme oil extraction techniques in San Benito County during the November 2014 election. Chevron also spent $3 million (unsuccessfully) to elect “their” candidates to the Richmond City Council.

Not only does Big Oil spend millions every year on lobbying and campaign contributions, but it funds "Astroturf" campaigns to eviscerate environmental laws. Leaked documents provided to Northwest Public Radio, Business Week and other media outlets last year exposed a campaign by the Western States Petroleum Association to fund and coordinate a network of “Astroturf” groups to oppose environmental laws and local campaigns against fracking in California, Washington and Oregon.

This network was revealed in a PowerPoint presentation from a Nov. 11 presentation to the Washington Research Council, given by Catherine Reheis-Boyd, WSPA President. (http://www.indybay.org/newsitems/2014/12/12/18765457.php)

Meanwhile, Governor Jerry Brown, a strong supporter of the environmentally destructive practice of fracking, has become known as "Big Oil Brown” for the millions of dollars that he has received from the oil industry.

Robert Gammon, East Bay Express Editor, revealed that before Governor Brown signed Senator Fran Pavley’s Senate Bill 4, Brown accepted at least $2.49 million in financial donations over the past several years from oil and natural gas interests, according to public records on file with the Secretary of State’s Office and the California Fair Political Practices Commission. (http://www.eastbayexpress.com/oakland/fracking-jerry-brown/Content?oid=3726533)

• The announcement by the powerful Westlands Water District on March 27, 2015, that Johnny Amaral will join Westlands’ staff as Deputy General Manager for External Affairs, effective May 1, 2015.

Mr. Amaral is currently the Chief of Staff for Representative Devin Nunes, who represents California’s 22nd Congressional District and is best known for sponsoring legislation to increase pumping Delta water to corporate agribusiness and to eviscerate Endangered Species Act protections for Central Valley salmon, Delta smelt and other species.( http://www.indybay.org/newsitems/2015/03/27/18770539.php)

• The Department of Water Resource’s hiring of Susan Ramos “on loan” from the Westlands Water District to serve as “a liaison between all relevant parties” surrounding the Delta Habitat Conservation and Conveyance Program (DHCCP) and provide “technical and strategic assistance” to DWR.

• The Governor’s appointment of Laura King Moon, a lobbyist for the state’s water exporters, as Chief Deputy Director for the California Department of Water Resources (DWR) in September 2013. Before her appointment, she served as a project manager for the Bay Delta Conservation Plan while “on loan” from the State Water Contractors, as chief deputy director for Department of Water Resources. (http://www.counterpunch.org/2013/09/20/gov-brown-appoints-water-lobbyist-to-california-department-of-water-resources/)

• The resignation of State Senator Michael J. Rubio in February 2013 to go work in a “government affairs” position for Chevron. Rubio, who was leading the charge to weaken the landmark California Environmental Quality Act (CEQA) and make it friendlier to corporations, claimed he resigned in order to spend more time with his family.
Add Your Comments
Support Independent Media
We are 100% volunteer and depend on your participation to sustain our efforts!