by Dave Id
Afrika Town is a flourishing community garden in what was long a vacant lot in Oakland at the intersection of San Pablo Avenue and Brush Street, next to the Qilombo social center. On March 26, the landowner came with a bulldozer to raze the garden, backed up by thirteen Oakland police officers. Activists quickly gathered and were able to convince the landowner to return a week later. On April 3, when the landowner had promised to return to clear the lot, dozens of community members turned out to defend the garden. The owner backed down, apparently with added pressure from City Hall, giving Afrika Town the opportunity to buy the land for a permanent community garden on the edge of West Oakland. 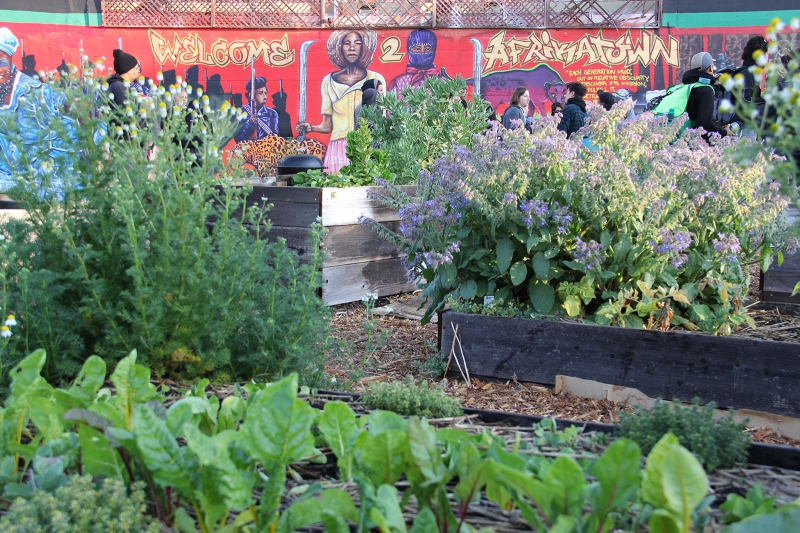 
The lot that is now the Afrika Town Community Garden has been empty and unused for as long as this reporter can recall over the past 25 years in Oakland. Yet after several months of work by volunteers to clear and prepare the lot, and within weeks of the garden's official opening on March 7, the owner of the lot arrived with a bulldozer and Oakland police to raze the garden on March 26. Community activists sprang into action, rallying to defend the lot, and were able to convince the owner to agree to back off for a week.

Anticipating the arrival of another bulldozer and more Oakland police on April 3, Afrika Town volunteers issued a call-out for community defense of the land. Thirty people were in place to defend the garden as early as 7am. Over time the numbers of those present in solidarity were double that or more.

Shortly before noon, a realtor who represents the landowner, believed to be Noel Yi, came to speak with Afrika Town Garden Collective. The realtor told collective members that city council members including Lynette McElhaney encouraged Yi to work with the collective on transferring ownership to Afrika Town.

Certainly, an April 2 letter written by civil rights attorney Yolanda Huang on behalf of the Afrika Town Garden Collective and addressed to city attorney Barbara Parker, chief of Oakland police Sean Whent, and new mayor Libby Schaaf played a role in garnering at least tenuous city hall support for pushing Yi to work with Afrika Town rather than sending in OPD to clear the way for a bulldozer.

The realtor said a "discounted" price might be able to be negotiated. Having purchased the lot in 2002 for over $200,000, the current asking price is $995,000 for the land, so it remains to be seen how low of a price Yi is willing to accept.

Afrika Town is now in dire need of funds to survive. Hopefully, the landowner will agree to a reasonable selling price. Perhaps local NGOs can step in to assist the process and possibly cover some of the cost. Nevertheless, serious funds need to be raised.

In the meantime, volunteers vow to remain vigilant guarding the garden from those who might come to destroy it and welcome local community members to participate in tending to the land.

To contribute to the Afrika Town garden becoming a permanent community resource for West Oakland residents, you can make a donation at:

An Interview with Linda Grant on Cultivating Resistance in Afrikatown
https://www.indybay.org/newsitems/2015/03/30/18770619.php 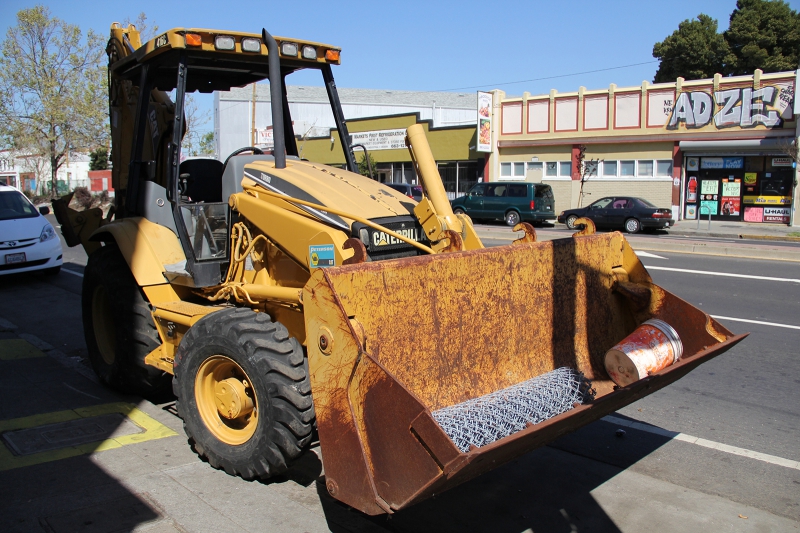 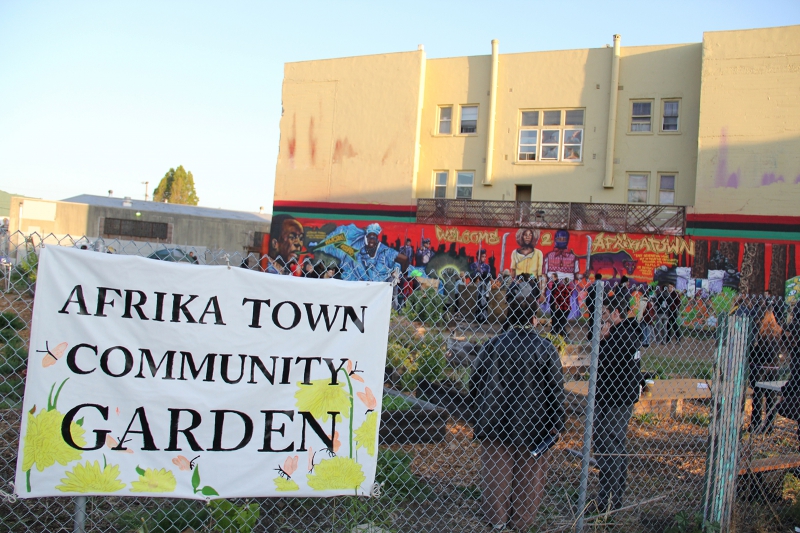 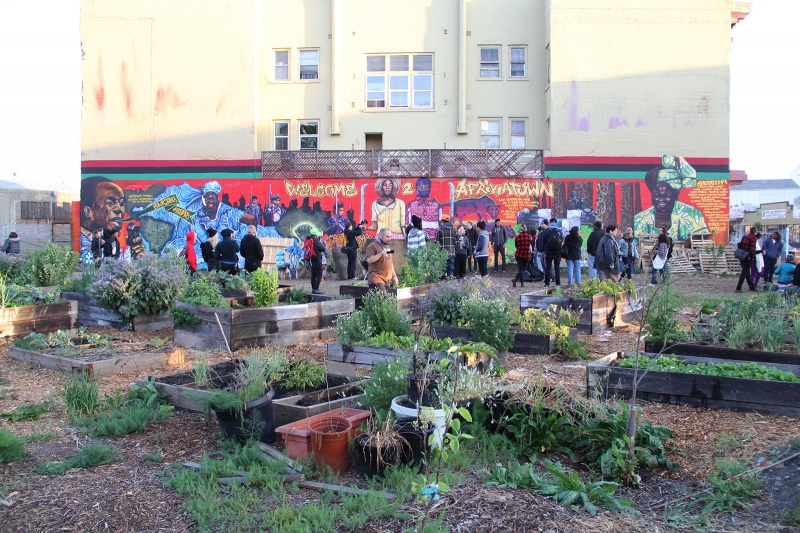 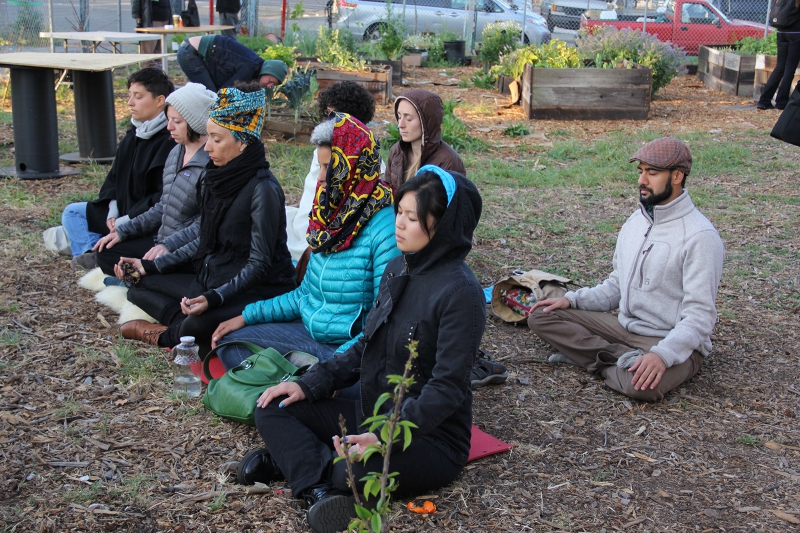 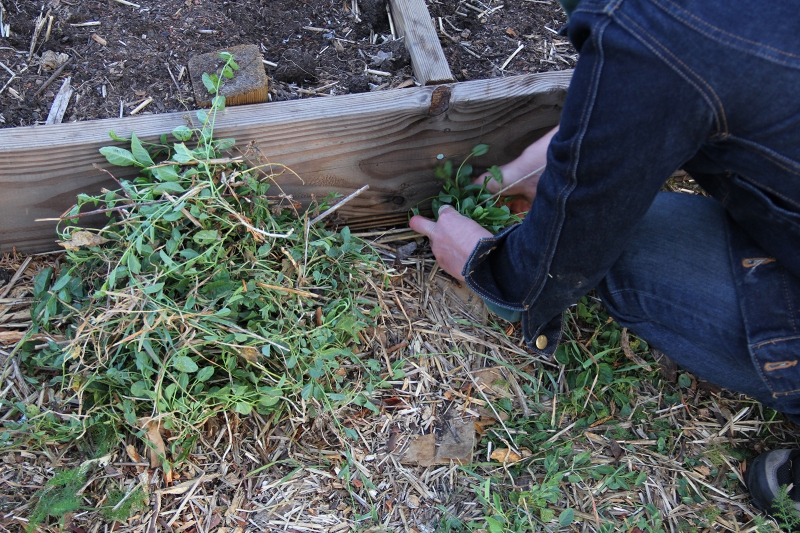 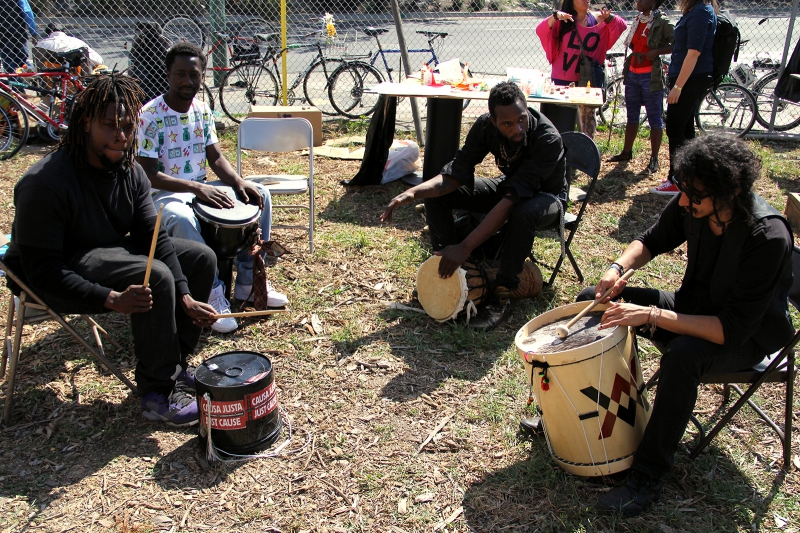 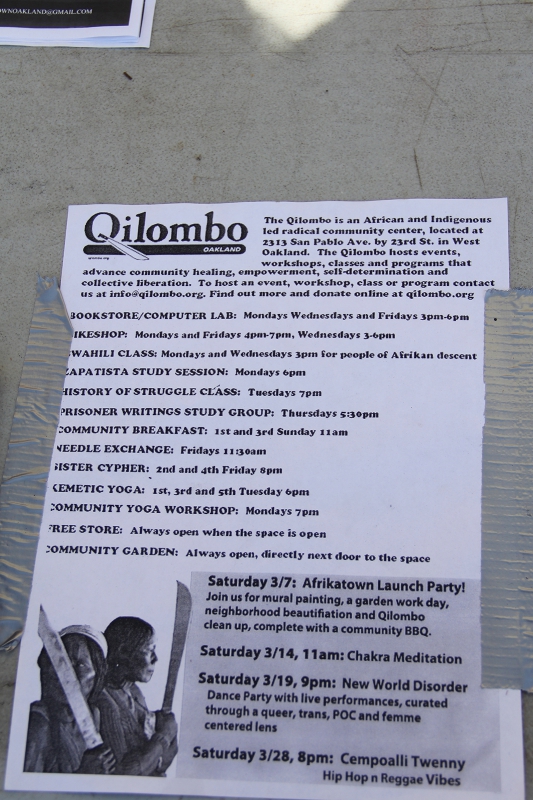 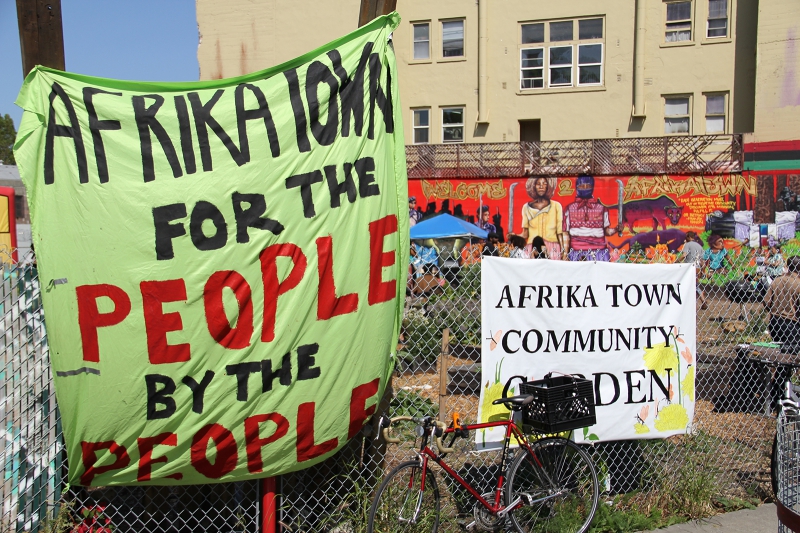 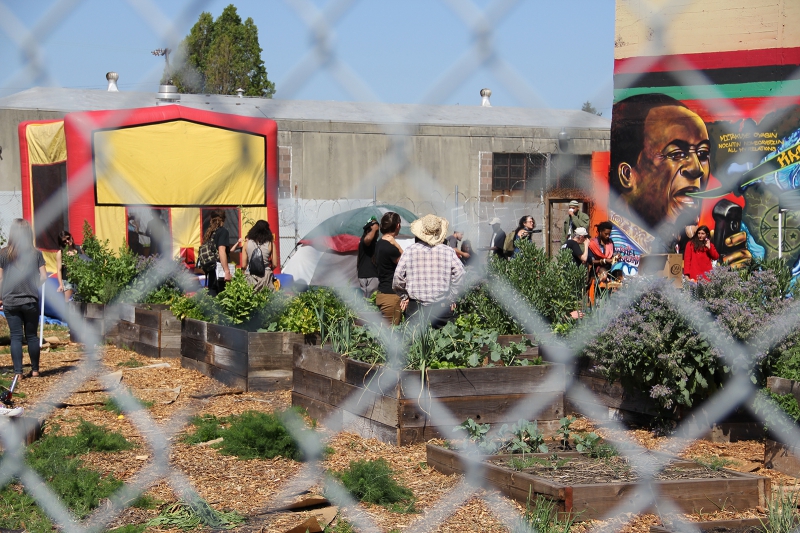 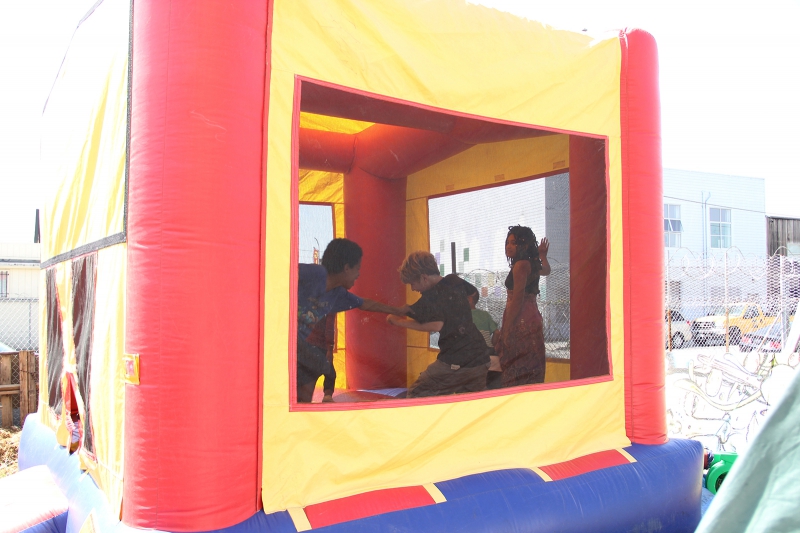 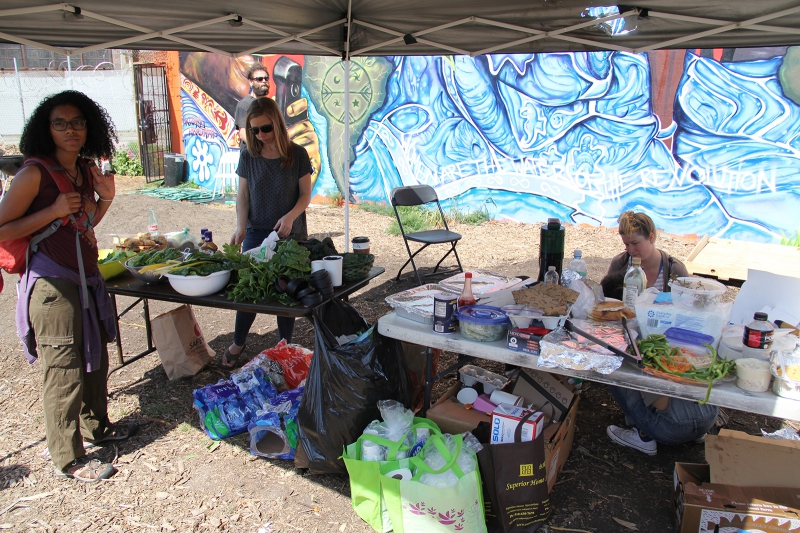 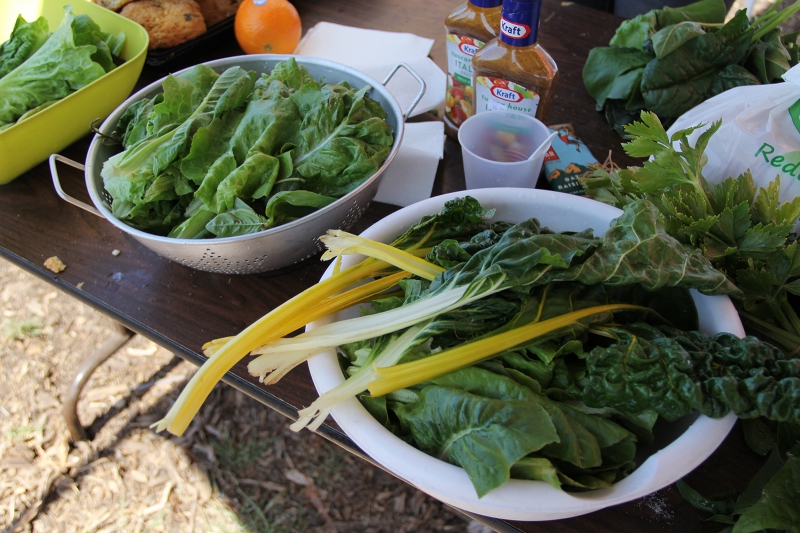 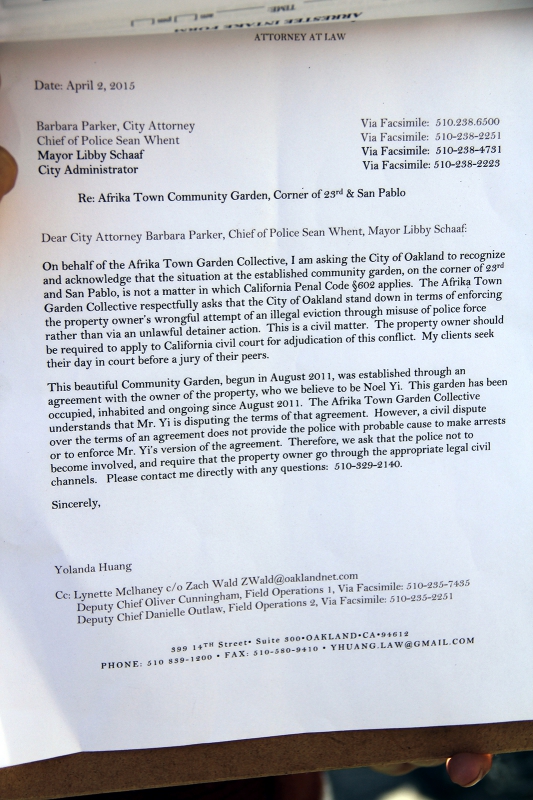 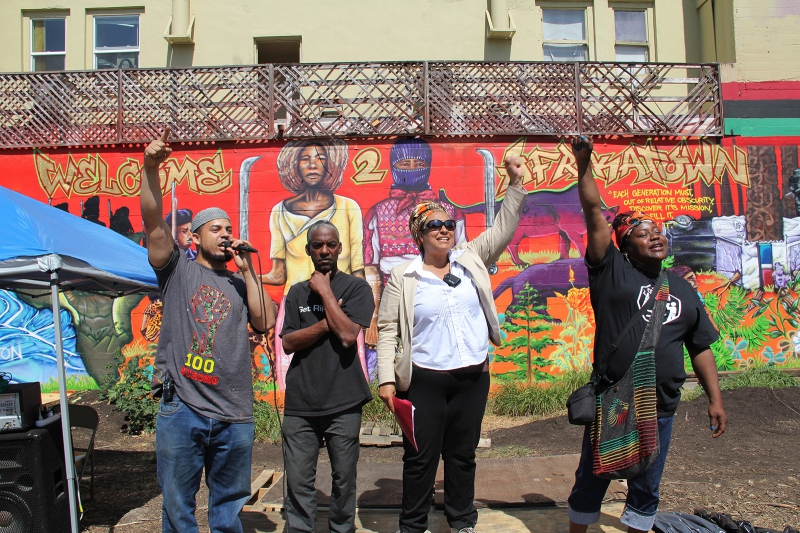 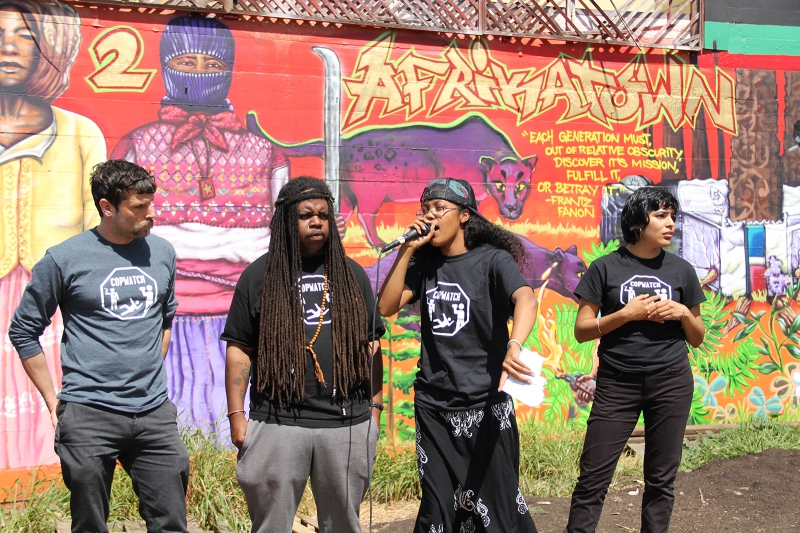 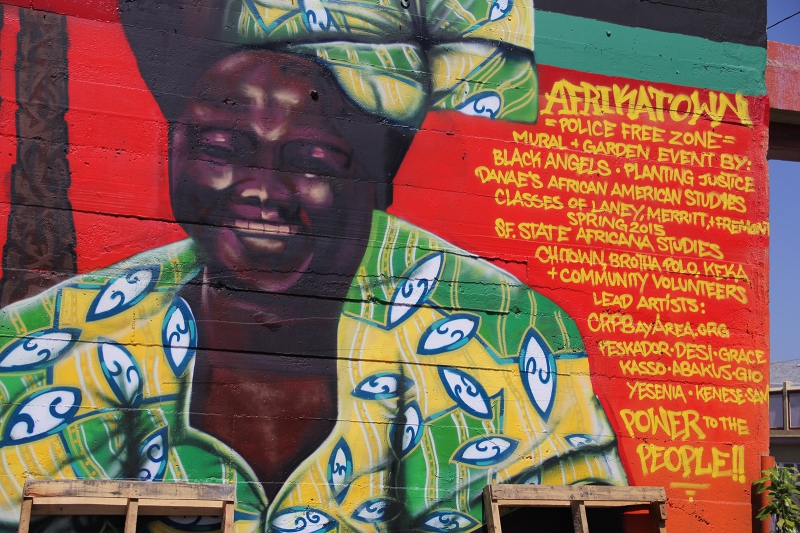 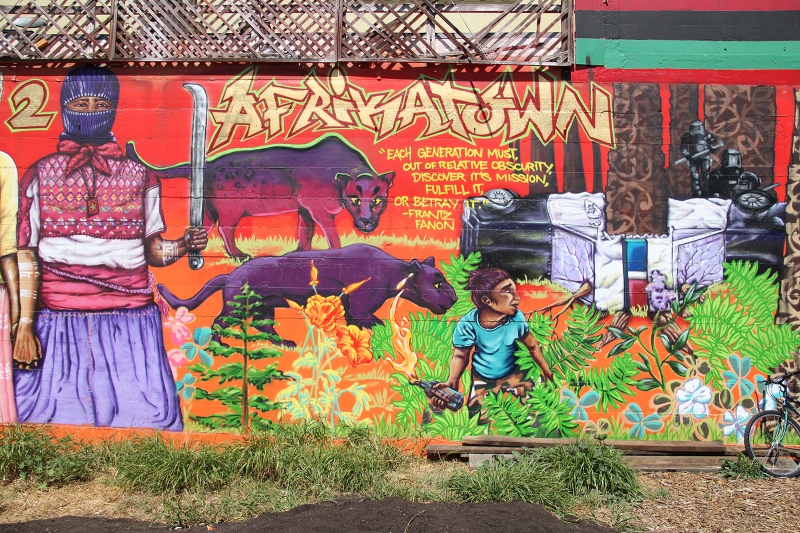 original image (1600x1067)
"Each generation must, out of relative obscurity, discover its mission, fulfill it, or betray it."
- Frantz Fanon 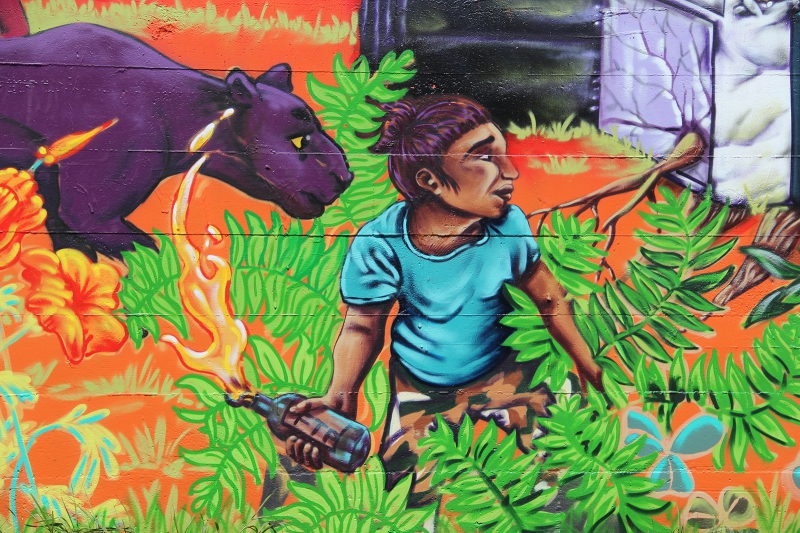 original image (1600x1067)
END_OF_DOCUMENT_TOKEN_TO_BE_REPLACED
Add Your Comments
Support Independent Media
We are 100% volunteer and depend on your participation to sustain our efforts!