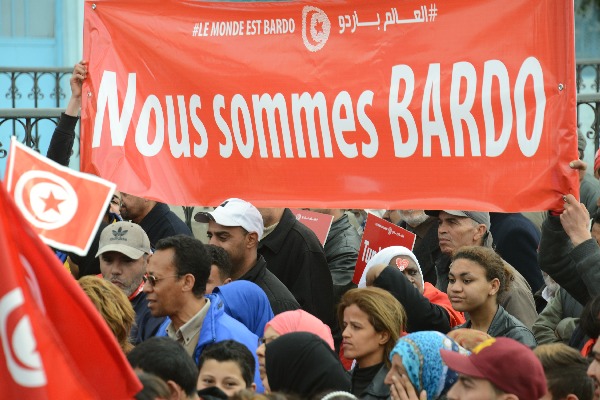 The opening march of the World Social Forum in Tunis on 24 March 2015 was from the Saadoun Gate of the old city (Medina) to the Bardo Museum where barely a week earlier Islamic State terrorists had shot their way into this most important museum of Tunisian history, killing 21 foreign tourists and one member of the Tunisian anti-terrorism brigade. Two of the terrorists were also killed by police. The march was together with thousands of Tunisians from all walks of life gathering to say, "Non à la violence!"

The closing march on 28 March 2015 was along Avenue Habib Bourguiba to the Place du 14 Janvier (date of the Tunisian revolution overthrowing Zine el-Abidine Ben Ali in 2011) included a particular emphasis on solidarity with Palestine.

But many World Social Forum participants joined yet another larger march against terrorism the next day where over 100,000 people marched from the Saadoun Gate to Bardo National Museum. Among the many chants and slogans was "Je suis Bardo," mirroring the response in France to the recent terrorist attack on the offices of the journal Charlie Hebdo.

While the global Left generally focuses its opposition to foreign military interventions and social inequality, this World Social Forum has identified the dual right-wing dangers of Western military aggression and Islamist terrorism as threats to social progress and creating an alternative world.

An estimated 40,000 people from all continents -- but with a high participation from Africa, Europe, and the Middle East -- gathered at the El-Manar campus of the University of Tunis to discuss alternatives to neoliberalism, free trade, terrorism, global warming, among many other issues. The one uprising of the Arab Spring that has advanced socio-political democracy, even if only a little, has created a space to host the World Social Forum at an otherwise very unsettling time for the Middle East and North Africa (MENA) region.

The venue gave this World Social Forum a heavy focus on Northern Africa (Tunisia, Western Sahara, Morocco, and trans-Mediterranean migrations, but less about Algeria, Libya, or Egypt) and the Middle East (especially Palestine, and struggles in Syria, Bahrain, and the Kurdish region). Sometimes controversies erupted as between Moroccans and participants from the Western Sahara, or between different groups of Syrians -- one favoring unity to fight ISIS and another to support the Syrian revolution. While Tunisian grassroots organizations were many, European NGO money was much in evidence. The WSF is staunchly secular left, yet the Islamic Republic of Iran had a booth here. While U.S. participation was almost invisible, there was a workshop here on "From Ferguson to Palestine".

Most impressive was the sheer magnitude of the organization -- greeters at the airport, taking virtual possession of a major university campus during a break period, hundreds of local student volunteers, a sea of exhibit tents, an exhibition of political caricatures, free travel on the tram lines, and the confluence of so many peoples, cultures, and differences in political perspectives within the Left. 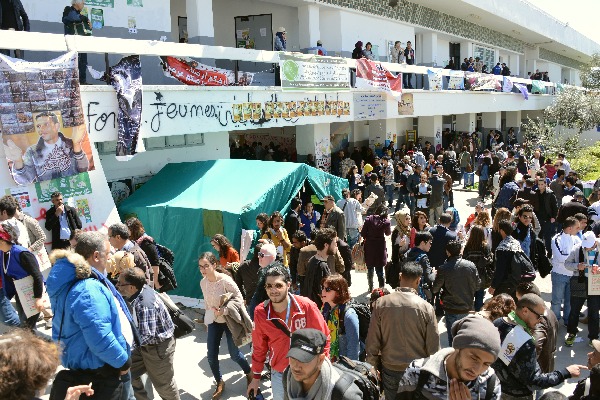 The World Social Forum took over the entire El-Manar campus of the University of Tunis for five days.
§Dragon of global warming
by Sharat G. Lin Sunday Apr 5th, 2015 4:08 AM 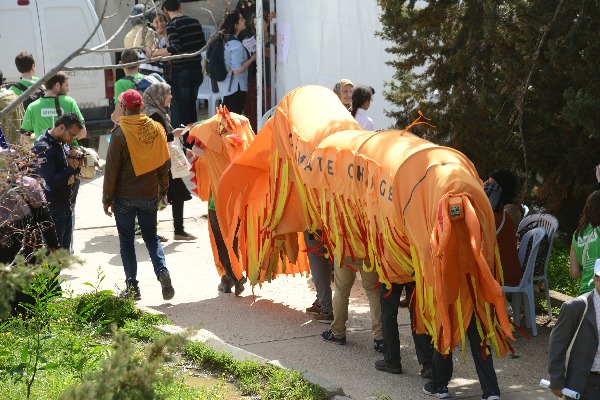 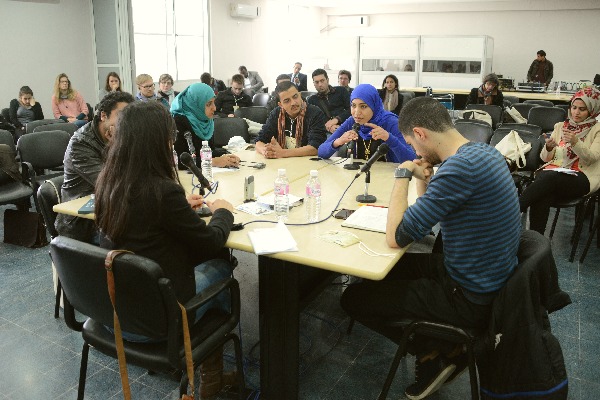 "Fishbowl" conference on the future of the Arab revolutions.
§Women's rights
by Sharat G. Lin Sunday Apr 5th, 2015 4:08 AM 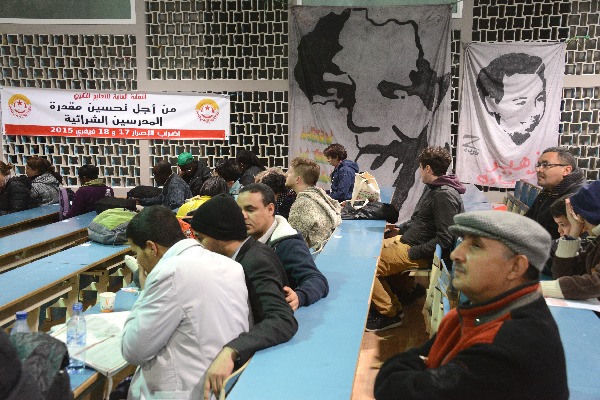 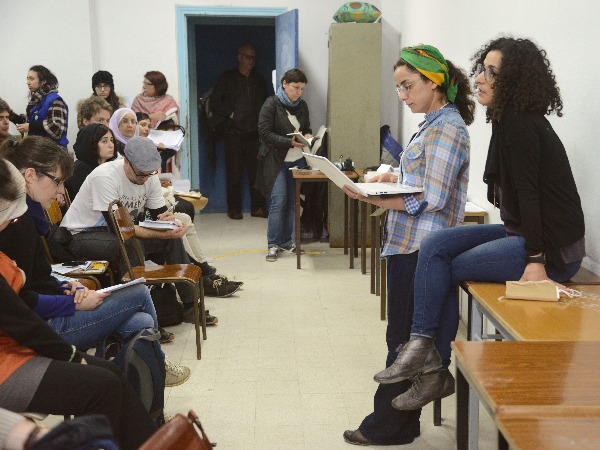 Women from the Kurdish region of Turkey, Iran, and the West discuss the promising role of women in future revolutions.
§Bahrain tent
by Sharat G. Lin Sunday Apr 5th, 2015 4:08 AM 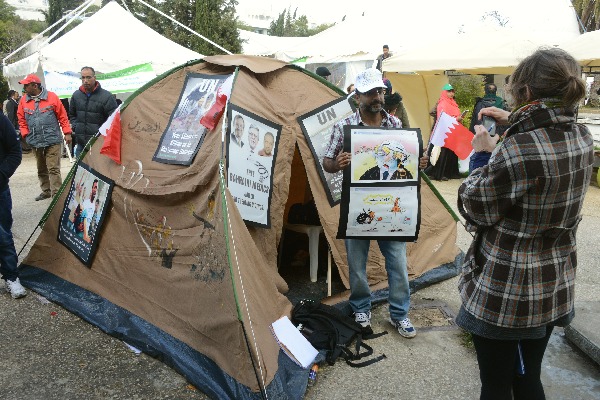 Bahraini activists remind WSF participants about the revolution that was crushed in Bahrain.
§Caricatures
by Sharat G. Lin Sunday Apr 5th, 2015 4:08 AM 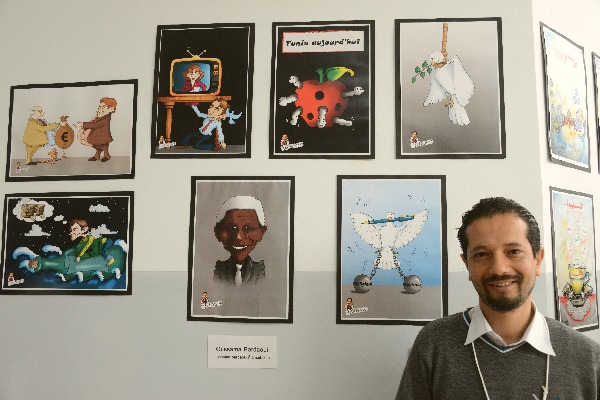 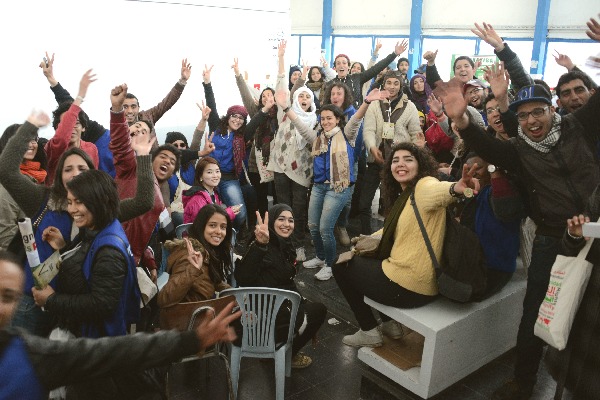 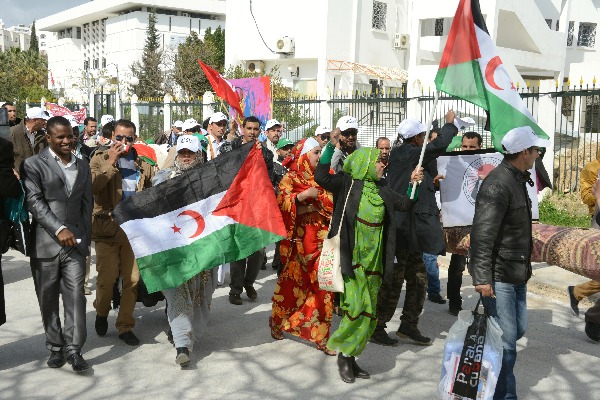 People of the Western Sahara march to join the closing march.
§Palestine!
by Sharat G. Lin Sunday Apr 5th, 2015 4:08 AM 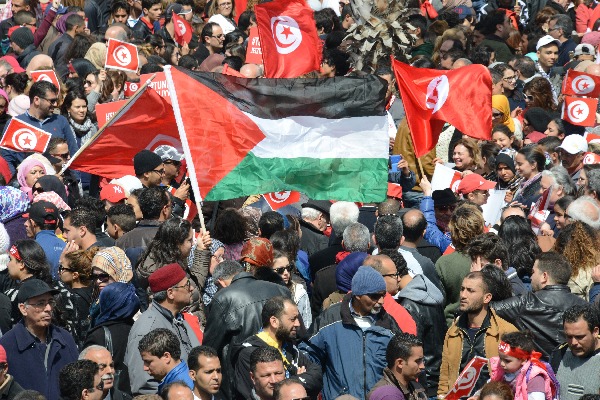 WSF participants carried Palestine and Tunisia flags in the grand march to the Bardo Museum on 29 March 2015.
Add Your Comments
Support Independent Media
We are 100% volunteer and depend on your participation to sustain our efforts!