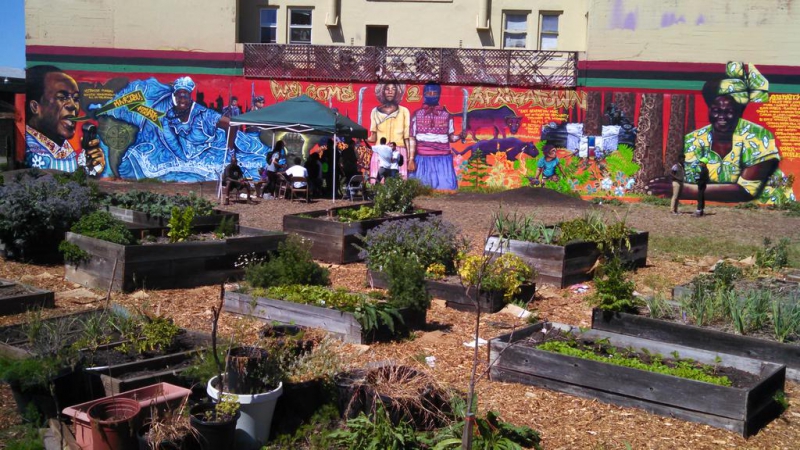 original image (1024x576)
(Oakland, CA) - We need the voices, bodies and the love of the local community to stop developers from destroying the vision of a successful Afrikan counterculture movement. AfrikaTown has provided the community with fresh fruits and vegetables, a comfortable environment to interact with one another, barbecues and a place to gain political awareness. We are asking for folks to show up, bring your bodies, signs and stand in solidarity with one of the last black-ran community spaces in West Oakland. With your help, AfrikaTown has the power to prevent the complete displacement of black and brown residents in West Oakland.

Before AfrikaTown was built, the lot on which it stands was dilapidated, unkempt and filled with dirty needles and garbage. The lot was not only an eyesore to the community, it was also a safety hazard. Qilombo and members of the West Oakland community, partnered with countless organizations including Black Angels, Planting Justice, SF State Africana studies and neighborhood schools, for a massive overhaul of the space. It took months of hard work, but in early March, AfrikaTown was able to open its doors to begin nurturing and cultivating the community.

Since it’s inception, AfrikaTown has provided a haven for the most marginalized in the West Oakland community including: the homeless, domestic violence and sex trafficking survivors, recovering addicts and the formerly incarcerated. AfrikaTown and Qilombo have become a true community and cultural hub. It’s a lively space that offers Kimetic Yoga, social justice and awareness classes, Self-Defense and Know Your Rights training, as well as, parties that give the community a chance to celebrate and enjoy themselves in an area that’s wrought with poverty and displacement.

On April 3rd, the current landlord is coming with bulldozers to tear down the garden. He intends to sell the land to developers that will build luxury condos, and continue the trend of pushing the long-term residents from the community. We want to show the landlord that the community stands with us and that AfrikaTown is a space that is for the people, by the people! We need time to raise the funds to purchase the land, and we need your support! Unity is what we need to stop this!

We need to show the landlord, police department and City of Oakland the positivity and hope that AfrikaTown has restored in the community. Samora Machel wrote that, “A collective sense means that the individual measures himself by the extent to which he can devote his energy to the progress of the masses and the revolution. A sense of collective responsibility means understanding that any mission we are given, any material entrusted to us, is intended in the final analysis for the progress of the masses and the revolution.”

Using our love, voices and bodies, we can stop this! We can unite the community, and in doing so, empower the community. AfrikaTown is the physical manifestation of the spirit of the revolution. Come support this vision and be a part of the budding Afrikan Liberation.

http://www.qilombo.org
Add Your Comments
Support Independent Media
We are 100% volunteer and depend on your participation to sustain our efforts!