by Dan Bacher
"If Delta smelt, once the most numerous species in the estuary, and winter Chinook and other species lingering on the brink of extinction go extinct, the state water board and the state and federal fishery agencies will be the responsible policies," said Bill Jennings, Executive Director of the California Sportfishing Protection Alliance (CSPA). 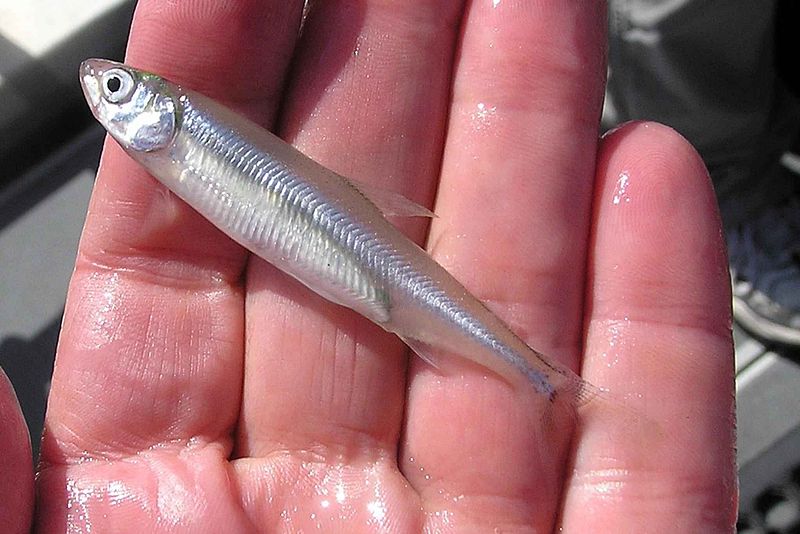 Delta smelt, once the most abundant fish in the Bay Delta Estuary, are now on the precipice of extinction in the wild. Sadly, there’s only one place where the fish can be found by the thousands — the Fish Conservation and Culture Laboratory (FCCL) of the University of California, Davis.

The U.S. Bureau of Reclamation recently awarded the UC Davis lab’s captive breeding program, located in Byron near Discovery Bay, a total of $10 million over a four-year period to continue and improve its work preserving the imperiled species.

This is a critical time for the survival of the smelt. The latest trawl survey by the California Department of Fish and Wildlife (CDFW) found just six smelt. That survey follows the fall midwater trawl survey, when biologists recorded the lowest number of smelt ever documented, 8, at a total of 100 sites sampled from September through December.

The 2.0 to 2.8 inch long fish is an indicator species that demonstrates the health of the Bay Delta Estuary. The species, found only in the estuary, was federally listed as “threatened” in 1993 and as “endangered” under the California Endangered Species Act in 2009.

For the past seven years, the laboratory, in collaboration with the UC Davis Genomic Variation Lab, has been raising a refuge population of Delta smelt, “preserving their genetic diversity and providing a supply of the fish for scientific research,” according to a UC Davis news release.

“The refuge population provides a level of protection against species extinction,” said Tien-Chieh Hung, director of the FCCL at UC Davis. “Our laboratory is, so far, the only place in the country that regularly reproduces and raises the Delta smelt throughout their whole life cycle, creating a supply for further studies.”

In announcing the funding, the Bureau said there “an urgent need for a genetically managed refugial population of Delta smelt to serve as a critical safeguard against species extinction in the event that the natural population continues its decline.”

The Bureau said maintaining a genetically diverse population of Delta smelt in captivity would provide a seed population for future rehabilitation - should the smelt’s habitat ever recover from decades of Delta export pumping, water diversions, pollution and other factors.

Aa safeguard against extinction, the lab starts its spawning season by producing about 200,000 Delta smelt eggs and cultures approximately 20,000 fish each year.

The goals of the project are to:
• Continue to develop the Delta smelt refuge population as a safeguard against species extinction;
•Create a genetically sound population of captive fish for research purposes; and
• Conduct experiments on smelt physiology, health, condition and behavior.

The situation of the smelt is so critical that Peter Moyle, a professor and fish biologist with the UC Davis Center for Watershed Sciences, this March told the Delta Stewardship Council to “prepare for the extinction of the Delta smelt in the wild."

Moyle said the latest state trawl survey found only six smelt — two males and four females — where there normally would have been several hundred. He also said there is no reliable estimate of the past and present numbers of Delta smelt.

“When it comes to past and present numbers of smelt, we don't have real estimates, only the indices,” said Moyle. “Folks have tried but the efforts stretch credulity. In a sense exact numbers don't matter.”

Moyle emphasized, “The real question is have densities gotten so low, the population is below a threshold of maintaining itself? Can males and females even find one another?"

Moyle said the reasons behind the collapse of the Delta smelt are complex, starting with the change in the estuary caused by the removal of freshwater.

“I wish there was a single smoking gun for the crash of delta smelt but there are many, starting with the change to the estuarine hydrodynamics created by removal of freshwater by upstream diverters, in-delta diverters, and the pumps in the south delta," he said.

“Some others (not an exclusive list) include predation on larvae by silversides, reduction in food supply by clams and ammonium discharges, increases in water clarity and diverse micro-contaminants. I think drought has exacerbated the effects of all these conditions,” said Moyle.

“In the short run, there is not much we can do. The long run is more complicated,” said Moyle.

Bill Jennings, Executive Director of the California Sportfishing Protection Alliance, responded to the announcement of the federal funding for the project by stating, “It’s laudable – but if we can’t establish the natural conditions that will support the fish in the estuary, it does little good to have a few fish in a tank in the UC Davis program.”

“If Delta smelt go extinct in the wild, the same thing will happen again if UC Davis fish are dumped into the estuary. You have to change the hydrology of the estuary,” said Jennings.

As for the causes of the Delta smelt’s decline, Jennings said all of the factors are either caused or exacerbated by the lack of freshwater flows.

“The fact that our regulatory agencies are unable to protect the public trust resources to slow the increase in pollutant discharges into the estuary is an indictment of regulators that have been captured by special political interests,” said Jennings. “If Delta smelt, once the most numerous species, and winter Chinook and other species lingering on the brink of extinction go extinct, the state water board and the state and federal fishery agencies will be the responsible policies."

The collapse of Delta smelt occurs as part of a larger ecosystem decline since the State Water Project started pumping massive quantities of water south of the Delta in 1967. The fall midwater trawl surveys conducted annually by the California Department of Wildlife show that population indices of Delta smelt, striped bass, longfin smelt, threadfin shad, American shad and Sacramento splittail have declined 97.80%, 99.70%, 99.98%, 97.80%, 91.90%, and 98.50%, respectively, between 1967 and 2014, according to Jennings.

Add Your Comments
Latest Comments
Listed below are the latest comments about this post.
These comments are submitted anonymously by website visitors.
TITLE
AUTHOR
DATE
Why Do Disappearing Smelt Matter?
Tom A.
Counter Technology
Beeline
Support Independent Media
We are 100% volunteer and depend on your participation to sustain our efforts!