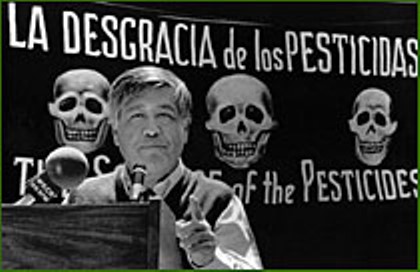 Watsonville, CA – In honor of Cesar Chavez’s birthday, a diverse coalition of farmworker groups, labor unions, teachers, parents and scientists will release a new report documenting pesticide threats in the air and call for specific reforms relating to the use of pesticides. Co-founder of the United Farm Workers, Cesar Chavez was the country’s most prominent advocate for pesticide reform, fasting 36 consecutive days for that cause in 1988.

State Senate Majority Leader Bill Monning will lead a list of prominent pesticide reform speakers who continue Chavez’s fight to reform pesticide use today at the Cesar Chavez Day Pesticide Reform news conference, Tuesday, March 31, at Noon at the Watsonville Plaza Gazebo at 350 Main Street in Watsonville. The news conference is sponsored by Californians for Pesticide Reform and the Monterey Bay Central Labor Council, including the United Farm Workers (UFW).

EPA Farm Worker Protection Standard needs strengthening. “A lot has changed in the last 20 years—but for farm workers, not so much,” said Lauro Barajas, Central Coast Regional Director of the UFW, adding, “The EPA’s Worker Protection Standard for Agricultural Pesticides [WPS] hasn’t been updated since 1995. But so much more is known today about the dangers of pesticide exposure—a stronger WPS is long overdue.” Mr. Barajas’ call will be echoed today in Washington D.C., where a coalition of groups will turn in to the EPA a nation-wide petition for greater protections from pesticides for farm workers.

State chloropicrin protections are inadequate. Earlier this year, the Department of Pesticide Regulation (DPR) announced that new regulations of the fumigant pesticide chloropicrin would soon be implemented. The regulations will include protective safety zones—or buffer zones—around schools and residences between 25 and 100 feet.

Recent local studies indicate that such a buffer zone is insufficient to shield neighboring residents from the cancer-causing chemical. “How can 100 feet protect us, when DPR air-monitoring at the Salinas Airport found chloropicrin concentrations at 40% above safety levels last year? The airport is more than a quarter mile from ag fields!” commented Josh Ezekiel, a 4th Grade teacher in the Alisal Union School District in Salinas.

In Watsonville, special education teacher Justin Matlow conducted a test of the air at his home during and after nearby—within 350 and 850 feet—chloropicrin applications. He and Pesticide Action Network scientists found chloropicrin concentrations in the air that pose elevated cancer risk and are above regulators’ levels of health concern. On one day, the pesticide was found at levels three times greater than state officials consider the maximum health limit. And these findings demonstrate that DPR’s recommended buffer zone protections would not have protected Justin Matlow’s children from levels of exposure to chloropicrin that pose increased health risks. “This is a concern not only for me and my neighbors, but also for the many families across the Central Coast and the state that live near fields fumigated with chloropicrin,” said Mr. Matlow.

Latino children are the children most often in harm’s way of pesticide threats, especially in Monterey Bay region. Dr. Ann Lopez, Executive Director of the Center for Farmworker Families, quotes Cesar Chavez, “He used to draw on the ‘canary in a coal mine’ analogy, when he spoke about farm workers and their children versus pesticides. ‘Farm workers are society’s canaries,’ Chavez said, ‘Farm workers--and their children--demonstrate the effects of pesticide poisoning before anyone else.’” Dr. Lopez expressed concerns that this environmental injustice continues today, highlighting recent race data from the Department of Public Health (DPH). “The DPH study last April reported that Latino children in California were 91% more likely than white children to attend schools within ¼-mile of the heaviest use of hazardous pesticides. We’ve just learned from DPH that in Monterey County, Latino schoolchildren are 320% more likely to attend schools with the highest pesticide use nearby. It’s deeply troubling; it’s environmental racism.”

Local and state pesticide reforms needed now. Many of the speakers and news conference attendees affiliated with the Safe Strawberry Working Groups of Monterey and Santa Cruz Counties and the Monterey Bay Central Labor Council, are calling on Monterey County and Santa Cruz County Agricultural Commissioners and state legislators to implement the following reforms:
a) Establish large, health-"protection zones" of at least one mile around schools, residences, and other sensitive sites where highly hazardous pesticides are applied.
b) Require one-week advance notification of highly hazardous agricultural pesticide use near schools, homes, hospitals and other sites.
c) Develop stronger regulations on chloropicrin use: These air monitoring results illustrate the need to tighten chloropicrin use rules to reduce exposure levels and better protect children from risk of respiratory illness and cancer.

Californians for Pesticide Reform is a diverse, statewide coalition of over 185 member groups working to strengthen pesticide policies in California to protect public health and the environment. Member groups include public and children's health advocates, clean air and water groups, health practitioners, environmental justice groups, labor, education, farmers and sustainable agriculture advocates from across the state.
The Monterey Bay Central Labor Council is the local body of the AFL-CIO. Over 60 unions are affiliated with the MBCLC, representing more than 35,000 union members and their families in Monterey and Santa Cruz counties.