by Dan Bacher
Representatives of the "Crunch Nestlé Alliance" said the company is draining up to 80 million gallons of water a year from Sacramento aquifers during a record drought. They claim Sacramento City Hall has made it possible through a "corporate welfare giveaway."

Photo of protest in front of the Nestlé Waters bottling plant in Sacramento on March 20 by Dan Bacher. 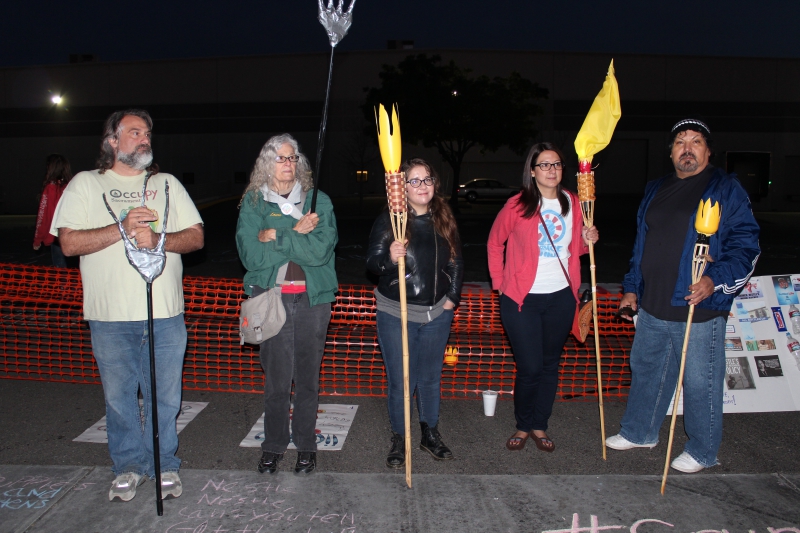 Environmental and human rights activists, holding plastic “torches” and “pitchforks,” formed human barricades at both entrances to the Nestlé Waters bottling plant in Sacramento at 5:00 a.m. on Friday, March 20, effectively shutting down the company's operations for the day.

Members of the “Crunch Nestlé Alliance" shouted out a number of chants, including ”We got to fight for our right to water,” “Nestlé, Stop It, Water Not For Profit," and “¿Agua Para Quien? Para Nuestra Gente.”

The protesters stayed until about 1 pm, but there were no arrests.

Representatives of the alliance said the company is draining up to 80 million gallons of water a year from Sacramento aquifers during a record drought. They claim Sacramento City Hall has made it possible through a "corporate welfare giveaway."

“This corporate welfare giveaway is an outrage and warrants a major investigation,” Coalition spokesperson Andy Conn said. “For more than five months we have requested data on Nestlé water use. City Hall has not complied with our request, or given any indication that it will. Sacramentans deserve to know how their money is being spent and what they’re getting for it. In this case, they’re getting ripped off.”

Lola Ellis of 99 Rise Sacramento, who spoke on the bullhorn at the protest, said, “Nestlé’s bottling of water in Sacramento is unsustainable in the current state of drought. We really don’t’ know how much water they are taking from the aquifer and that is a scary thing.”

The coalition protested what they call Nestlé's “virtually unlimited use of water” while Sacramentans (like other Californians) who use a mere 7 to 10 percent of total water used in the State of California, have had severe restrictions and limitations forced upon them.

The coalition is calling on Nestlé to pay rates commensurate with its enormous profit, or voluntarily close down.

“Nestlé pays only 65 cents for each 470 gallons it pumps out of the ground – the same rate as an average residential water user. But the company can turn the area's water around, and sell it back to Sacramento at mammoth profit,” according to a news release from the activists.

They said Sacramento officials have refused attempts to obtain details of Nestlé's water use. Coalition members have addressed the Sacramento City Council and requested that Nestlé either pay a commercial rate under a two tier level, or pay a tax on its profit.

A call to the Sacramento City Department of Utilities about the details of Nestlés water use hadn’t been returned as of press time.

But according to Fox 40 News, “In 2014 Nestlé says it used 50 million gallons from the Sacramento Municipal Water Supply, which they say is a fraction of one percent of total water demand within the city of Sacramento.” (http://fox40.com/2015/03/20/protesters-try-to-stop-nestle-water-bottling-plant-in-south-sacramento/)

A statement issued by the company in October 2014 regarding a previous protest in front of the plant said:

"In Sacramento, Nestlé Waters North America purchases and pays the standard metered rate for municipal water, which is delivered through the municipal pipe system. We are not ranked among the top 10 water users in Sacramento as we use about two thousandths of one percent (0.0016%) of Sacramento’s total water demand. Our company is subject to any restrictions, drought or otherwise, imposed on all light industrial or business customers by the city of Sacramento and we comply with those restrictions." (http://www.scribd.com/doc/245724284/Nestle-Waters-North-America-Water-Management-Statement)

Bob Saunders, also with the Crunch Nestlé Alliance, responded, "Nestlé can claim any amount of water they want, but we haven’t seen any documentation of the amount of water they’re using. We do know they’re allowed to take up to 80 million gallons per year.”

Mauro Oliveira, known as "Red Sun," showed up at the protest with his children, including Rise, Aren and Mahai'a, and connected the battle of local activists against Nestlé with the struggle of Indian Tribes, family farmers, grassroots environmental activists and fishermen to stop fracking, the Shasta Dam raise, and Governor Jerry Brown’s Bay Delta Conservation Plan (BDCP) to build the twin tunnels, the most environmentally destructive public works project in California history.

“This whole idea of bottling water goes against Indigenous Peoples' concept of water is sacred," said Oliveira. "The 20,000-year-old water in aquifers belongs to the last generation on earth. We don’t have the right to tap into this water.”

“The Governor said we should conserve, but millions of gallons of fracking waste are being reinjected into the aquifer in California. The Governor talks out of both sides of his mouth. Polluting our water supplies is a violation of human rights," said Oliveira.

The bottling plant in Sacramento is not the only one in California. A recent investigation in the Desert Sun found that Nestlé Waters North America has been pumping water from pristine streams of the San Bernardino National Forest with little to no oversight by the U.S. Forestry Service. (http://www.desertsun.com/story/news/2015/03/05/bottling-water-california-drought/24389417/)

“Nestlé Waters North America holds a longstanding right to use this water from the national forest near San Bernardino,” according to the Sun. “But the U.S. Forest Service hasn't been keeping an eye on whether the taking of water is harming Strawberry Creek and the wildlife that depends on it. In fact, Nestle's permit to transport water across the national forest expired in 1988. It hasn't been reviewed since, and the Forest Service hasn't examined the ecological effects of drawing tens of millions of gallons each year from the springs.”

On its website, Nestlé claims that it is committed to “environmental stewardship.” (http://www.nestle-watersna.com/en/about-nestle-waters)

“36 years of experience promoting healthy hydration, Nestlé Waters North America has 15 leading U.S. and Canadian bottled water brands,” according to the company. “The company’s commitment to environmental stewardship, especially in the areas of water use, packaging and energy, as well as its dedication to partnering in the communities where it operates, have led Nestlé Waters to achieve the number one bottled drinking water position in the U.S.”

Most of those great “deals” yielded mega profits for Nestlé at the expense of the public. Additionally, the environmental impact on many of those areas yielded “disastrous results,” the paper stated.

Nestlé is currently the leading supplier of the world’s bottled water, including such brands as Perrier and San Pellegrino. It has has 7,500 employees and 29 bottled water facilities across the U.S. and Canada, and annual revenues were $4.0 billion in 2012, up 6.8% from 2011. For nearly four decades, activists from an array of organizations have criticized the company for its human rights violations throughout the world.

For example, Food and Water Watch and other organizations blasted Nestlé’s "Human Rights Impact Assessment," released at the UN Forum on Business and Human Rights in December 2013, as a "public relations stunt."
(http://www.foodandwaterwatch.org/pressreleases/organizations-denounce-nestles-new-human-rights-impact-assessment-as-a-public-relations-stunt-us-version/)

“The failure to examine Nestlé’s track record on the human right to water is not surprising given recent statements by its chair Peter Brabeck-Letmath challenging the human right to water,” said Wenonah Hauter, Executive Director of Food & Water Watch. She noted that the company famously declared at the 2000 World Water Forum in the Netherlands that water should be defined as a need—not as a human right.

Watch Nestlé's CEO declare water “food that should be privatized, and not a human right”: http://http://www.globalresearch.ca/nestle-continues-stealing-worlds-water-during-drought/5438880

More recently Brabeck-Letmathe, after facing international criticism for his remarks, reversed course and now said he thinks that "water is a human right and that everyone, everywhere in the world, has the right to clean, safe water for drinking and sanitation." (http://www.nestle.com/aboutus/ask-nestle/answers/nestle-chairman-peter-brabeck-letmathe-believes-water-is-a-human-right?gclid=CPX_jpydycQCFQaTfgodFjAA0Q)

But activists continue to cite the company's bad human rights record, noting that Nestlé workers who have protested unjust labor conditions at the corporation’s facilities in Colombia have been assassinated by paramilitary death squads.

Taking the water from aquifers throughout the world and the deaths of workers protesting Nestlé policies are not the only violation of human rights that activists charge the corporation with. Groups including the International Baby Food Action Network (IBFAN) and Save the Children claim that the promotion of Nestlé infant formula over breastfeeding has led to health problems and deaths among infants in less economically developed countries.

“They’re a despicable company with death built into their business plan,” summed up Conn.

The Drought and The Tunnels

The Sacramento protest took place just days after Jay Famiglietti, the senior water scientist at the NASA Jet Propulsion Laboratory/Caltech and a professor of Earth system science at UC Irvine, revealed in an op-ed in the LA Times on March 12 that California has only one year of water supply left in its reservoirs. (http://touch.latimes.com/#section/-1/article/p2p-83043355/)

The $67 billion plan won't create one single drop of new water, but it will take vast tracts of Delta farm land out of production under the guise of "habitat restoration" in order to irrigate drainage-impaired soil owned by corporate mega-growers on the west side of the San Joaquin Valley.

The tunnel plan will also hasten the extinction of Sacramento River Chinook salmon, Central Valley steelhead, Delta and longfin smelt, green sturgeon and other fish species, as well as imperil the salmon and steelhead populations on the Klamath and Trinity rivers. The peripheral tunnels will be good for agribusiness, water privateers, oil companies and the 1 percent, but will be bad for the fish, wildlife, people and environment of California and the public trust.
§In front of the plant
by Dan Bacher 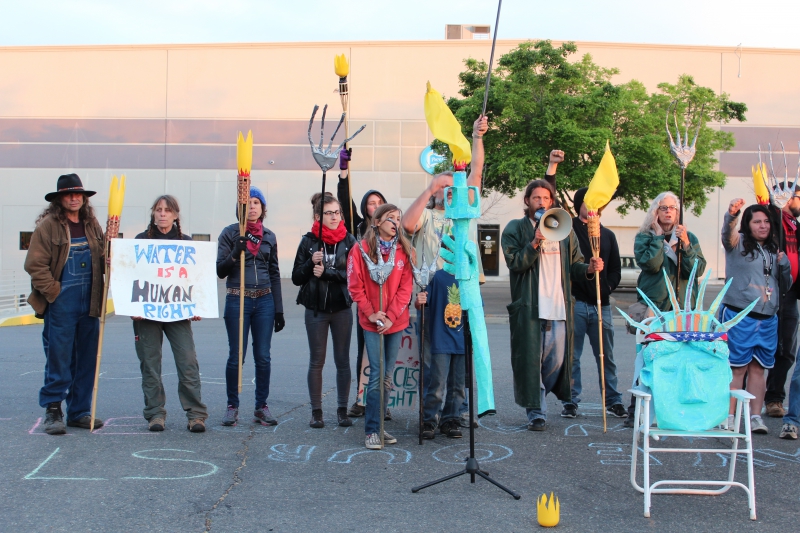 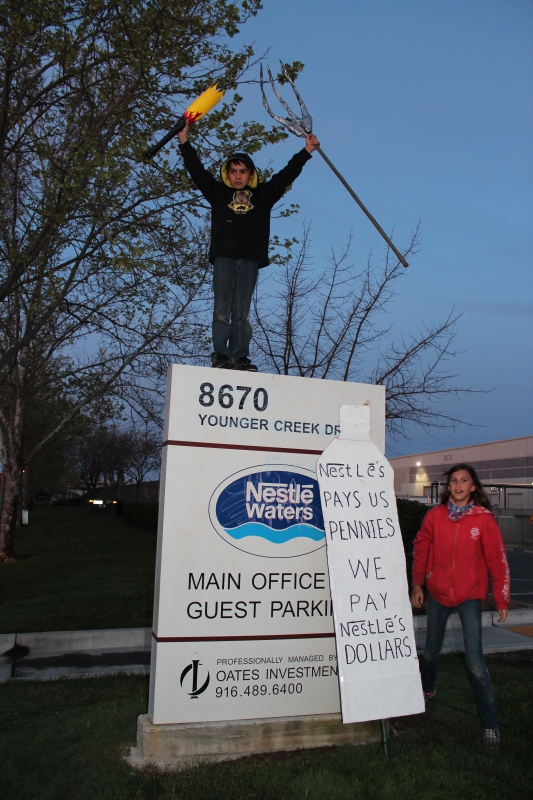 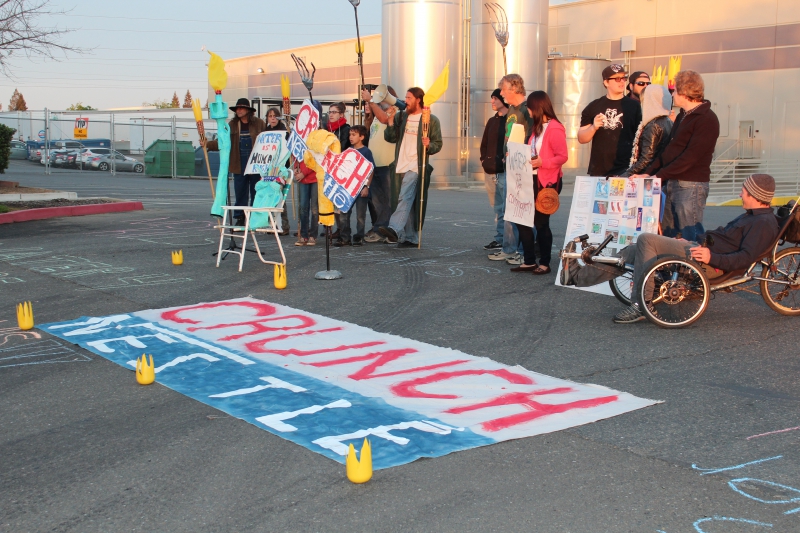 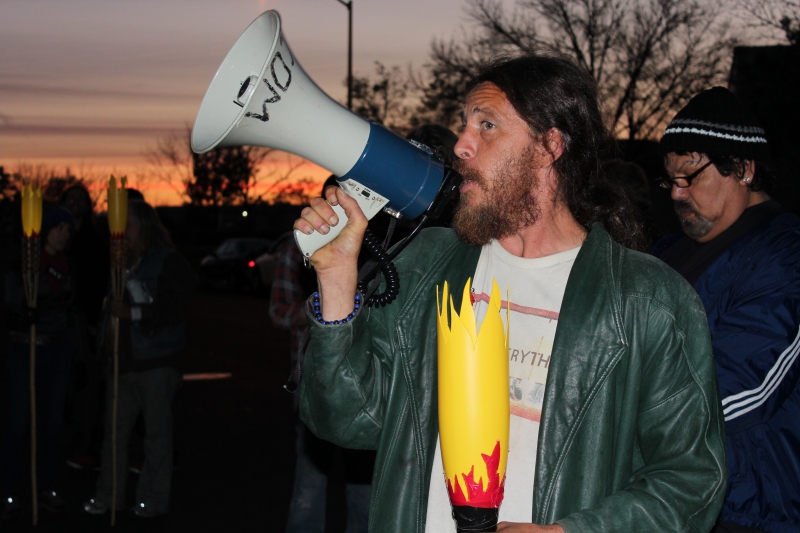 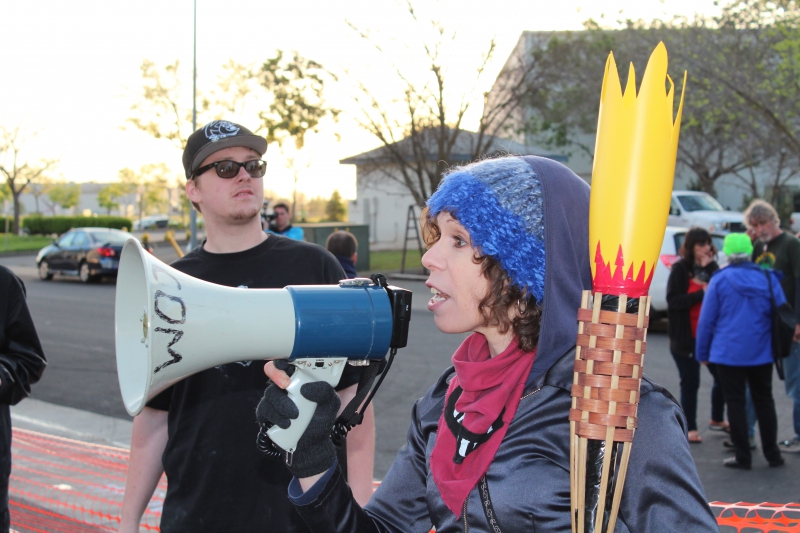 original image (5184x3456)
Delphine Brody, local activist, on the bullhorn. Photo by Dan Bacher.
§Water is not a commodity
by Dan Bacher 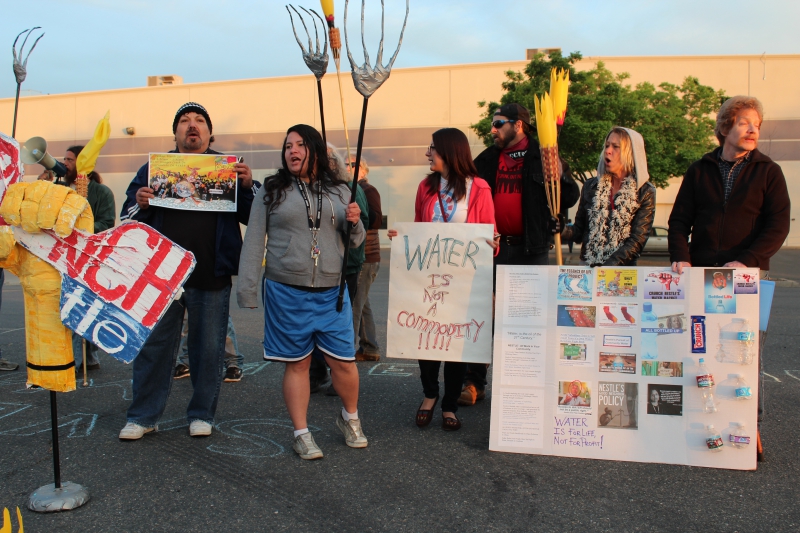 original image (5184x3456)
Protesters stayed in front of the plant from 5 a.m. to 1 p.m. Photo by Dan Bacher.
Add Your Comments
Latest Comments
Listed below are the latest comments about this post.
These comments are submitted anonymously by website visitors.
TITLE
AUTHOR
DATE
Can anyone help
Mel
Everyone is Gay in Indiana!
J Gay
Support Independent Media
We are 100% volunteer and depend on your participation to sustain our efforts!