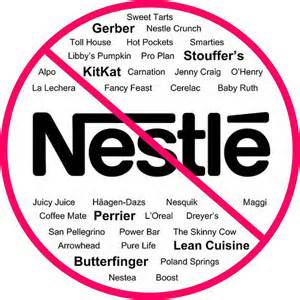 The city of Sacramento is in the fourth year of a record drought - yet the Nestlé Corporation continues to bottle city water to sell back to the public at a big profit, local activists charge.

The Nestlé Water Bottling Plant in Sacramento is the target of a major press conference on Tuesday, March 17, by a water coalition that claims the company is draining up to 80 million gallons of water a year from Sacramento aquifers during the drought.

The coalition, the "crunchnestle alliance," says that City Hall has made this use of the water supply possible through a "corporate welfare giveaway," according to a press advisory.

A coalition of environmentalists, Native Americans and other concerned people announced the press conference will take place at March 17 at 5 p.m. at new Sacramento City Hall, 915 I Street, Sacramento.

The coalition will release details of a protest on Friday, March 20, at the South Sacramento Nestlé plant designed to "shut down" the facility. The coalition is calling on Nestlé to pay rates commensurate with their enormous profit, or voluntarily close down.

"The coalition is protesting Nestlé's virtually unlimited use of water – up to 80 million gallons a year drawn from local aquifers – while Sacramentans (like other Californians) who use a mere 7 to 10 percent of total water used in the State of California, have had severe restrictions and limitations forced upon them," according to the coalition.

"Nestlé pays only 65 cents for each 470 gallons it pumps out of the ground – the same rate as an average residential water user. But the company can turn the area's water around, and sell it back to Sacramento at mammoth profits," the coalition said.

Activists say that Sacramento officials have refused attempts to obtain details of Nestlé's water used. Coalition members have addressed the Sacramento City Council and requested that Nestle’ either pay a commercial rate under a two tier level, or pay a tax on their profit.

In October, the coalition released a "White Paper" highlighting predatory water profiteering actions taken by Nestle’ Water Bottling Company in various cities, counties, states and countries. Most of those great “deals” yielded mega profits for Nestle’ at the expense of citizens and taxpayers. Additionally, the environmental impact on many of those areas yielded disastrous results.

Coalition spokesperson Andy Conn said, "This corporate welfare giveaway is an outrage and warrants a major investigation. For more than five months we have requested data on Nestlé water use. City Hall has not complied with our request, or given any indication that it will. Sacramentans deserve to know how their money is being spent and what they’re getting for it. In this case, they’re getting ripped off.”

Nestlé is currently the leading supplier of the world’s bottled water, including such brands as Perrier and San Pellegrino, and has been criticized by activists for human rights violations throughout the world. For example, Food and Water Watch and other organizations blasted Nestlé’s "Human Rights Impact Assessment" in December 2013 as a "public relations stunt." (http://www.foodandwaterwatch.org/pressreleases/organizations-denounce-nestles-new-human-rights-impact-assessment-as-a-public-relations-stunt-us-version/)

“The failure to examine Nestlé’s track record on the human right to water is not surprising given recent statements by its chair Peter Brabeck challenging the human right to water,” said Wenonah Hauter, Executive Director of Food & Water Watch. She noted that the company famously declared at the 2000 World Water Forum in the Netherlands that water should be defined as a need—not as a human right.

The press conference and protest will take place just days after Jay Famiglietti, the senior water scientist at the NASA Jet Propulsion Laboratory/Caltech and a professor of Earth system science at UC Irvine, revealed in an op-ed in the LA Times on March 12 that California has only one year of water supply left in its reservoirs. (http://touch.latimes.com/#section/-1/article/p2p-83043355/)

"As difficult as it may be to face, the simple fact is that California is running out of water — and the problem started before our current drought. NASA data reveal that total water storage in California has been in steady decline since at least 2002, when satellite-based monitoring began, although groundwater depletion has been going on since the early 20th century.

Right now the state has only about one year of water supply left in its reservoirs, and our strategic backup supply, groundwater, is rapidly disappearing. California has no contingency plan for a persistent drought like this one (let alone a 20-plus-year mega-drought), except, apparently, staying in emergency mode and praying for rain."

Meanwhile, Governor Jerry Brown continues to fast-track his Bay Delta Conservation Plan (BDCP) to build the peripheral tunnels to ship Sacramento River water to corporate agribusiness, Southern California water agencies, and oil companies conducting fracking operations. The $67 billion plan won't create one single drop of new water, but it will take vast tracts of Delta farm land out of production under the guise of "habitat restoration" in order to irrigate drainage-impaired soil owned by corporate mega-growers on the west side of the San Joaquin Valley.

The tunnel plan will also hasten the extinction of Sacramento River Chinook salmon, Central Valley steelhead, Delta and longfin smelt, green sturgeon and other fish species, as well as imperil the salmon and steelhead populations on the Klamath and Trinity rivers. The peripheral tunnels will be good for agribusiness, water privateers, oil companies and the 1 percent, but will be bad for the fish, wildlife, people and environment of California and the public trust.

The Delta smelt may already be extinct in the wild!

In fact, the endangered Delta smelt, once the most abundant fish in the entire Bay Delta Estuary, may already be extinct, according to UC Davis fish biologist and author Peter Moyle, as quoted on Capital Public Radio.

"Prepare for the extinction of the Delta Smelt in the wild," Moyle told a group of scientists with the Delta Stewardship Council. (http://www.capradio.org/articles/2015/03/16/endangered-delta-smelt-may-be-extinct))

According to Capital Public Radio:

'That trawl survey came up with just six smelt, four females and two males,' says Moyle. "Normally because they can target smelt, they would have gotten several hundred.'

Moyle says the population of Delta smelt has been declining for the last 30 years but the drought may have pushed the species to the point of no return. If the smelt is officially declared extinct, which could take several years, the declaration could change how water is managed in California.

'All these biological opinions on Delta smelt that have restricted some of the pumping will have to be changed,' says Moyle.

But Moyle says pumping water from the Delta to Central and Southern California could still be restricted at certain times because of all the other threatened fish populations."

The Delta smelt, an indicator species that demonstrates the health of the Sacramento-San Joaquin River Delta, reached a new record low population level in 2014, according to the California Department of Fish and Wildlife's fall midwater trawl survey that was released in January.

The smelt is considered an indicator species because the 2.0 to 2.8 inch long fish is endemic to the estuary and spends all of its life in the Delta.

The California Department of Fish and Wildlife (CDFW) has conducted the Fall Midwater Trawl Survey (FMWT) to index the fall abundance of pelagic (open water) fish, including Delta smelt, striped bass, longfin smelt, threadfin shad and American shad, nearly annually since 1967. The index of each species is a number that indicates a relative population abundance. For more information, go to: http://www.indybay.org/newsitems/2015/01/09/18766643.php

Poster's footnote:
Nestle plant in Sacramento takes public water during a drought and sells it back to them at a great profit.
Nestle markets the people's water under 17 different brand names in their plastic bottles while clogging the world's landfills.

2 http://www.nestle-waters.com/brands/all-brands
http://www.dailykos.com/story/2015/03/16/1...
Add Your Comments
LATEST COMMENTS ABOUT THIS ARTICLE
Listed below are the latest comments about this post.
These comments are submitted anonymously by website visitors.