§Higher Court Ruling in the Frey/Johnson Appeal
by Court of Appeals Thursday Mar 19th, 2015 11:41 AM 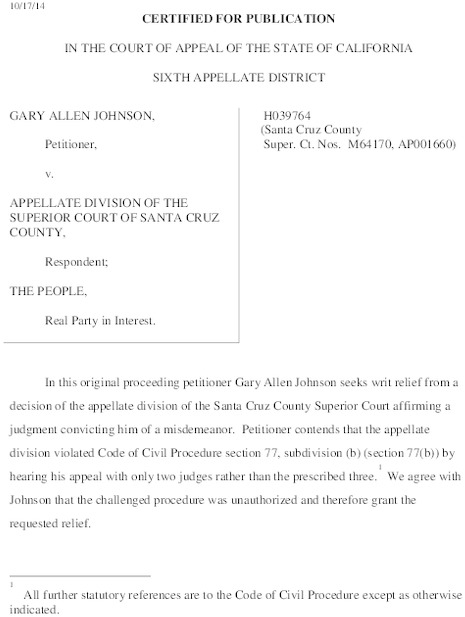 Download PDF (117.2KB)
Court decision that forced the court to hold this hearing.
Add Your Comments

§Rubber stamp gab fest? SB-608 is where the effective action is now...
by G
Monday Mar 16th, 2015 6:29 AM
The Santa Cruz Appellate hearing for the PeaceCamp2011/12 case will probably be another rubber stamp session. Ed talks, judges yawn, appeal denied. Then, if history repeats, the same thing happens at the 6th District California Appellate. Then, if history repeats, that's as far as it goes (just like the abandoned PeaceCamp2010 case).

The 3rd District California Appellate recently issued a negative opinion in Allen v. Sacramento (a similar case). Unless the Supreme Court of California (or perhaps the 9th Circuit United States Court of Appeals) is approached, the status of Allen v. Sacramento (nor PeaceCamp201*) will not change, and 647(e) will stand as the go to bludgeon for California municipalities that persecute the homeless 'legally'.

The abuse of 'rule of law' has not gone unnoticed. A recent report, associated with UC Berkeley and WRAP, surveyed the use of 647(e) and other ordinances that criminalize existence.

Meanwhile, back at California's legislative branch; SB-608 is a less ego-laden attempt to 'fix' 647(e).

While it is likely that bigots will push hard to stop SB-608, if it were to succeed the result would be the same as the judicial branch goal of PeaceCamp2010 (while the unjust law 647(e) would not be struck down, it would be modified, and would also acknowledge a persecuted class). If it fails, well, at least the exhaustion of redress will be more comprehensive.
http://PeaceCamp2010insider.blogspot.com/
Add a Comment
§647e Writ
by Osha Neumann (posted by Norse)
Tuesday Mar 17th, 2015 7:02 AM 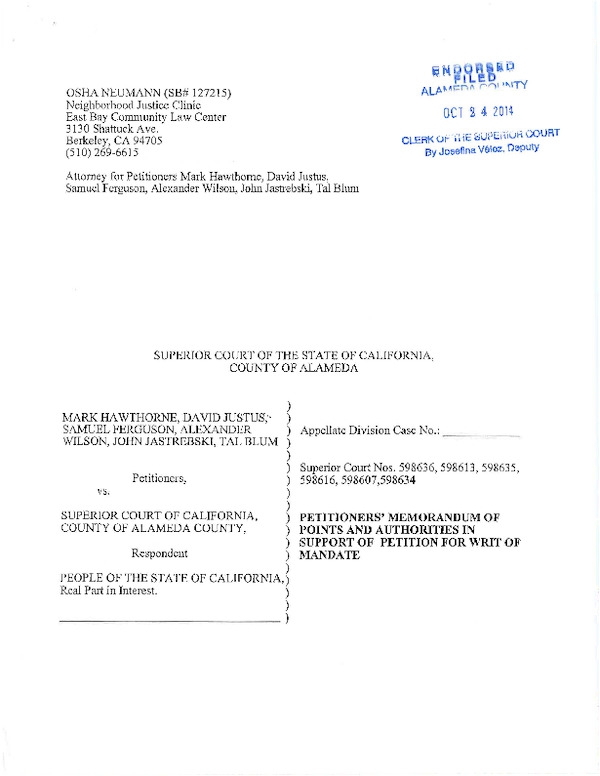 Download PDF (8.2MB)
Attorney Osha Neumann in the "Hate Man" case has appealed the use of 647e to drive this long-time Berkeley activist out of People's Park during the day. According to Neumann, for the last decade or more, trial judges were throwing out the use of 647e locally in Berkeley--but a new judge is refusing to do so--hence the Writ.

Thanks to G. for the references.
Add a Comment
Support Independent Media
We are 100% volunteer and depend on your participation to sustain our efforts!