Photo of Jerry Brown courtesy of the Governor's Office 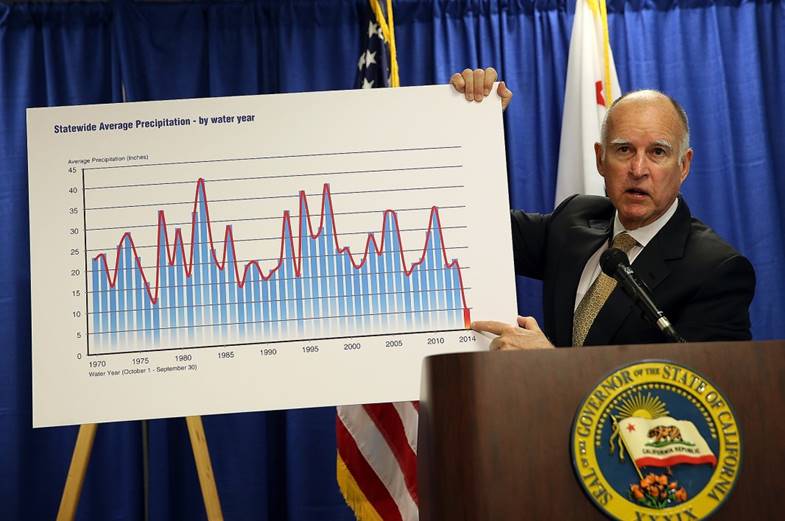 The poll results find nearly 56% of the state's voters approving of Brown's performance in office, while 32% disapprove. (http://www.field.com/fieldpollonline/subscribers/Rls2499.pdf)

However, then asked to consider three negative statements that have been made about the Governor, a 57% majority agrees with one of them – “favors too many big government projects that the state cannot afford right now.”

Although not specifically mentioned in the survey, the two "big government projects" they were referring to are the high speed rail project and the twin tunnels plan, the controversial "legacy" public works projects of the Brown administration.

Restore the Delta (RTD), opponents of Governor Jerry Brown’s rush to build water export tunnels that would drain the Delta and doom sustainable farms, salmon and other Pacific fisheries, responded to the Field Poll finding that the majority of California voters believe the Governor "favors too many big government projects the state cannot afford right now.”

The voters’ response is understood, including by the pollster, to include the Delta tunnels, according to RTD.

“Voters do not support the massive water export tunnels project," said Barbara Barrigan-Parrilla, executive director of RTD. "Governor Brown must rethink his water policies, and embrace a new, sustainable water solution. Governor Brown does have the vision and experience to recognize a dead end, and to abandon the doomed BDCP tunnels, which violate the Clean Water Act, degrade Delta families’ drinking water, and threaten salmon extinction.”

The tunnels would cost $67 billion, while a sustainable water solution would cost $20 billion

The tunnels would create no new water, while a sustainable water solution would create 5 to 10 million acre feet of water.

The tunnels would create 10,000 short-term construction jobs and destroy thousands of Delta farming and Pacific fisheries-related jobs, while a sustainable water solution would create thousands of long-term jobs installing water-saving devices and replacing the infrastructure.

The tunnels would mainly benefit huge mega-growers irrigating toxic, drainage impaired land on the west side of the San Joaquin Valley, while a sustainable water solution would benefit ALL Californians.

There is no doubt that Governor's Brown's approval ratings would slip well below 50 percent if the mainstream media and corporate "environmental" NGOs would stop greenwashing the Governor's environmental record and report the truth about Brown's war on fish, water and the environment.

Not only has Brown rushed the Bay Delta Conservation Plan to build the peripheral tunnels, but he has overseen the expansion of fracking in California; has approved the creation of oil industry-friendly "marine protected areas" under the corrupt Marine Life Protection Act (MLPA) Initiative; has presided over record water exports from the Delta in 2011; and has brought Delta smelt, longfin smelt, Central Valley steelhead and Sacramento River winter-run Chinook salmon closer to extinction.

For the truth about Governor Brown's environmental record, go to: http://www.counterpunch.org/2014/09/24/big-oils-favorite-governor-jerry-brown/ or http://www.eastbayexpress.com/SevenDays/archives/2015/02/16/meet-the-biggest-threats-to-californias-environment-the-winners-of-the-annual-cold-dead-fish-awards
Add Your Comments
Support Independent Media
We are 100% volunteer and depend on your participation to sustain our efforts!