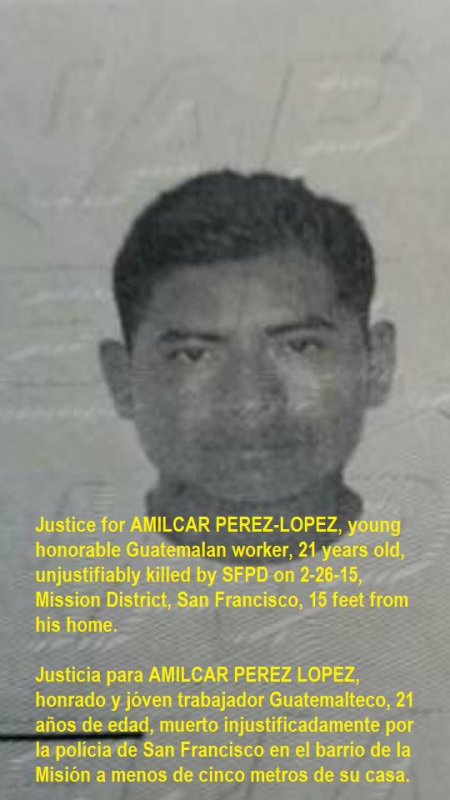 original image (540x960)
Friends, neighbors, and community members held a vigil for Amilcar Perez-Lopez, a 21 year old man killed by San Francisco Police Department Thursday night. Amilcar was universally remembered as a kind and generous man by his friends and neighbors. During the vigil, there were numerous stories told of Amilcar regularly giving food and money to the homeless that lived in the neighborhood. Friends, co-workers, neighbors, adults, children, and even his girlfriend were present to honor and remember the 21 year old. All present pledged support to Amilcar's family in Guatemala.

Side by side with praise of Amilcar from his friends and neighbors, were calls for justice in his death. Community members spoke of the inability for San Francisco Police to work with spanish speakers. Amilcar, a Guatemalan immigrant, was shot in front of his home, so neighbors are also witnesses. These witnesses have shared their joint experiences of being intimidated and bullied by SFPD since Amilcar's murder on Thursday night February 26th. That the witnesses have been intimidated is an accepted fact among people in the neighborhood. Speaker after speaker connected the dots between anti-immigrant racism and this case of police terror, these connections, neighbors said, were evident not only in the shooting but also in the police response to the shooting. A number of the witnesses are also facing eviction.

In their public campaign to justify the death of the 21 year old Amilcar Perez-Lopez, the police have stated Amilcar was in the process of stealing a bicycle. This claim is called into question by a number of witness statements. There are witnesses who say Amilcar was responding to the theft of his phone. There are witnesses who state they saw the owner of the bicycle and Amilcar in police custody 10 minutes before his death. Amilcar's body was left in the street for at least an hour, witnesses say, and while he lay SFPD was reported telling neighbors to stay inside their house and not look out the windows.

Present at the vigil were, among others, members of the Anti Police-Terror Project, the SF Answer Coalition, the Kenneth Harding Foundation, and the RCP. The neighborhood has shown extraordinary resilience and solidarity in the aftermath of Amilcar's killing. The neighborhood has organized emotional and counseling support for both witnesses and affected community members. There will also be a strong neighborhood presence at the town hall called for by SFPD Monday at 6pm at Cesar Chavez Elementary.

**THOSE CONCERNED WITH THE CASE OF AMILCAR PEREZ-LOPEZ ARE ENCOURAGED TO COME TO THE TOWN HALL MONDAY (3/2) AT CESAR CHAVEZ ELEMENTARY. UPDATES ON THE CASE CAN BE FOUND AT THE JUSTICE 4 AMILCAR PEREZ-LOPEZ FACEBOOK PAGE https://www.facebook.com/groups/353672264838421/ *** 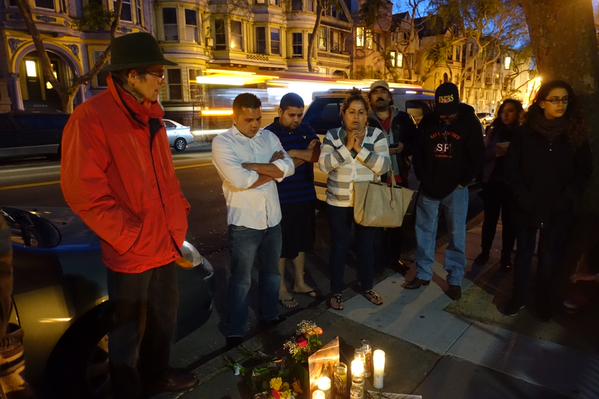 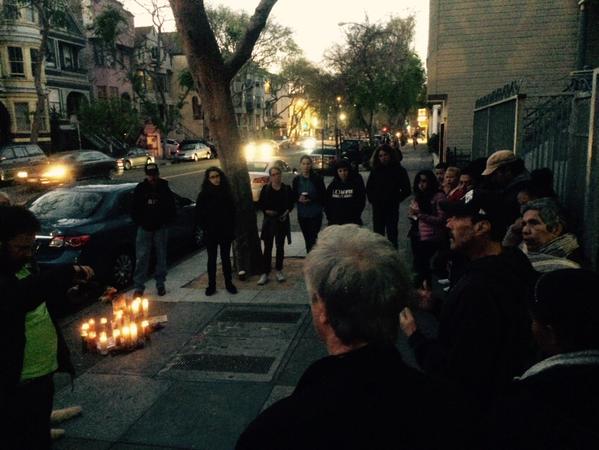 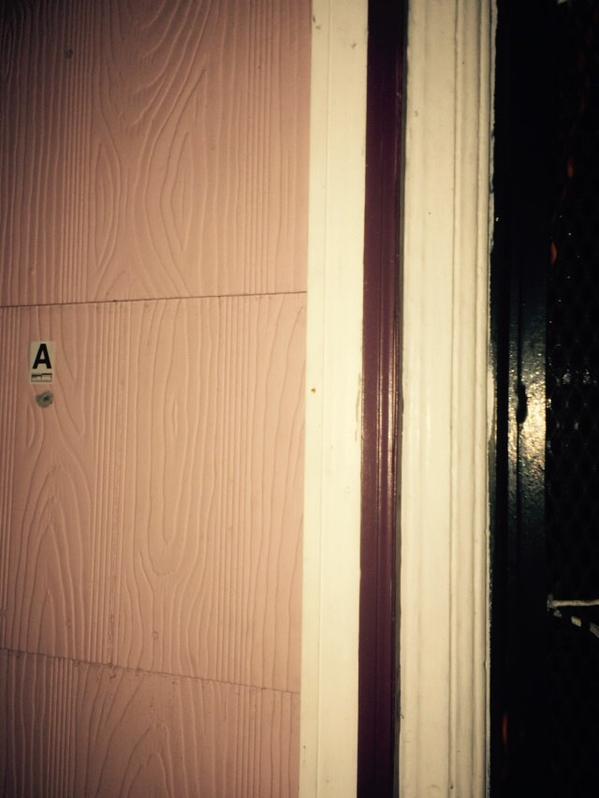 Neighbors were in their living room when this police bullet came within feet of their front door.
https://www.facebook.com/pages/Anti-Police...
§Police-Bullet Hole in Neighbor's Home
by Anti Police-Terror Project Sunday Mar 1st, 2015 10:26 PM 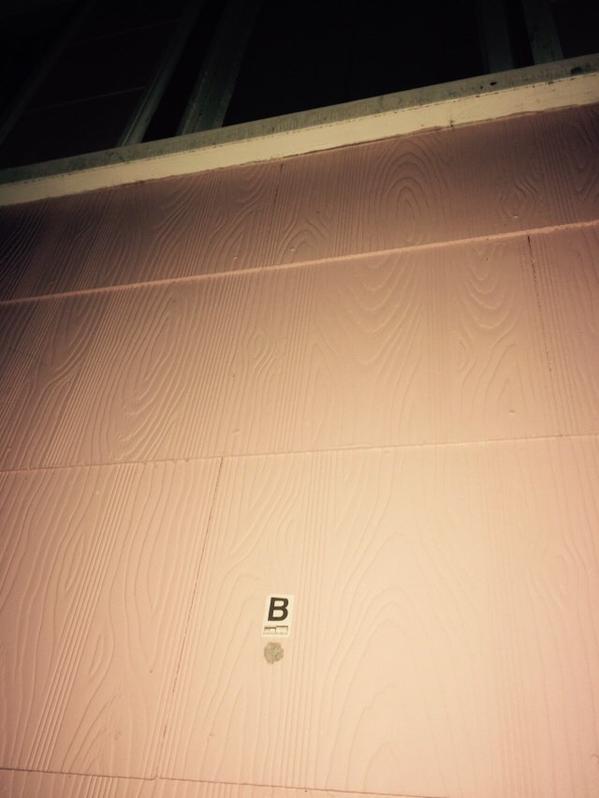 Neighbors were behind this wall when a police bullet came within feet of their living room window.
https://www.facebook.com/pages/Anti-Police...
§Community Calls for Justice for Amilcar
by Anti Police-Terror Project Sunday Mar 1st, 2015 10:26 PM 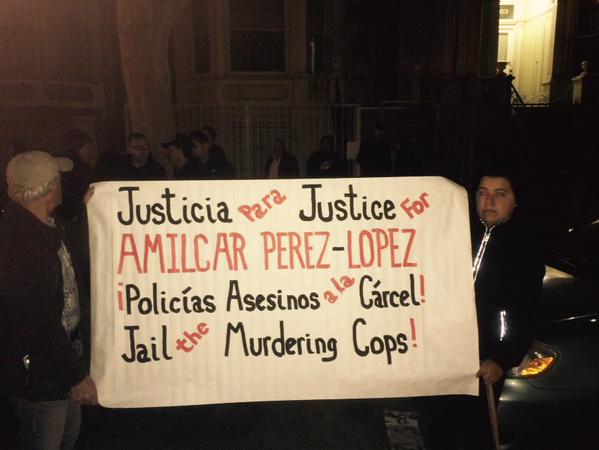 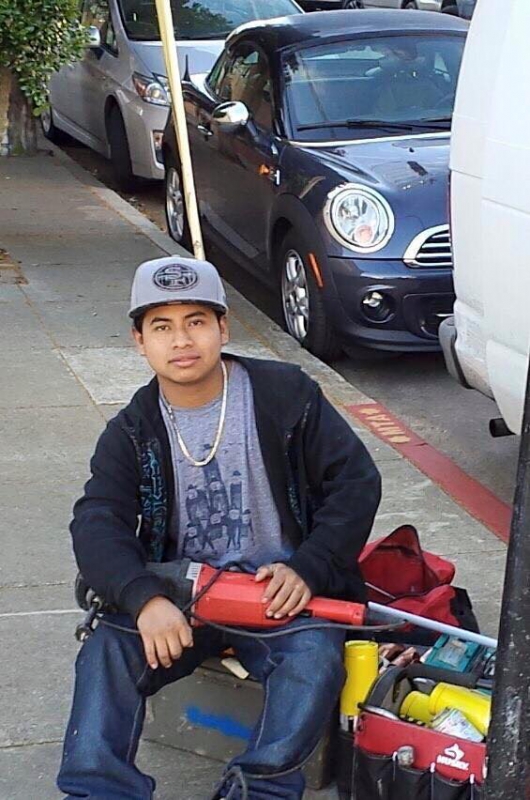 This was changed to: "There are witnesses who state they saw the owner of the bicycle and Amilcar in police custody 10 minutes BEFORE his death."
Add Your Comments
Support Independent Media
We are 100% volunteer and depend on your participation to sustain our efforts!