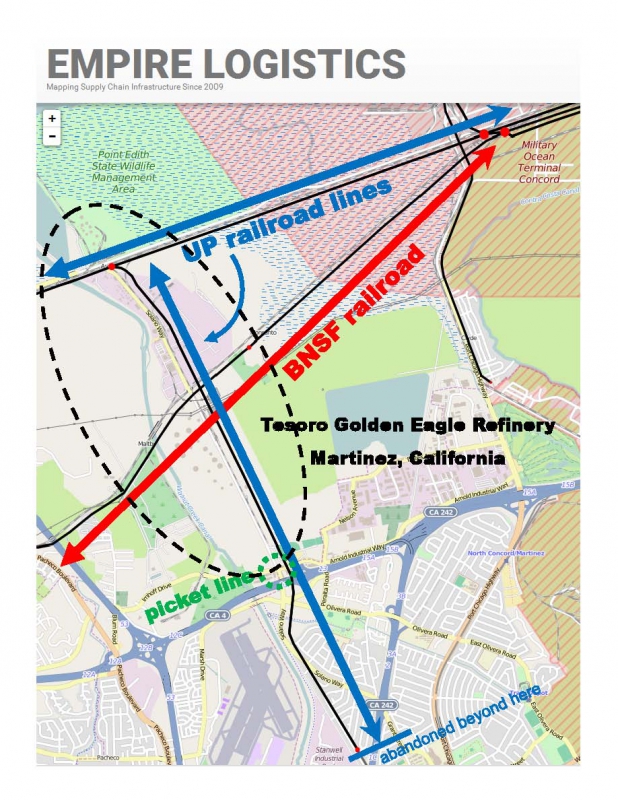 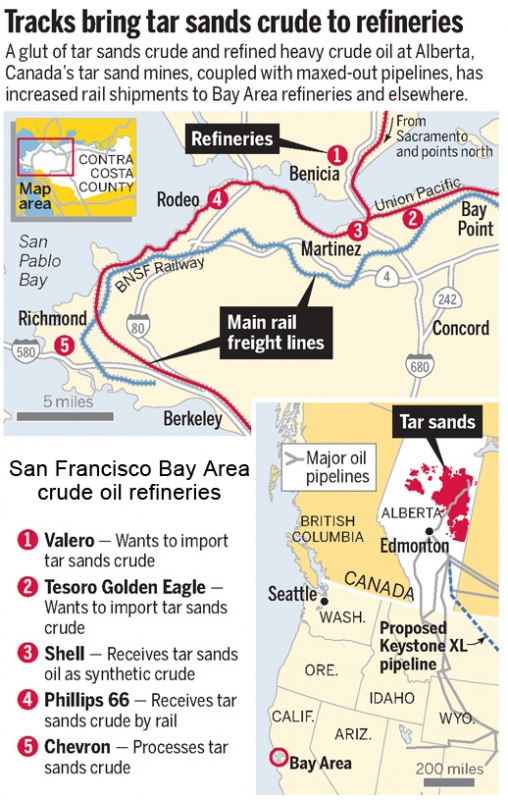 original image (518x815)
Here's the complex of refineries that makes this part of the Bay Area a "cancer cluster."
Add a Comment
§Workers need a program that fights for a clean planned socialist economy!
by CWG-USA
Saturday Mar 14th, 2015 8:11 AM

Workers need a program that fights for a clean planned socialist economy!

We need safe decent jobs, quality education, medical care, pensions, and housing for all!  We need massive infrastructure programs with investment of billions to employ the unemployed, to make the transition to clean energy production.  Millions are out of work or have sub-living minimum wages and survive in poverty while the owners of the energy and transport industries attack working conditions and violate our safety both at work and in our homes and in the wild.  The energy extraction and transportation industry under capitalist ownership driven by the profit motive will not and cannot make this work safe, therefore our program requires the expropriation of the extraction and energy industry as well as the transportation industry and the commanding heights of the economy because they are all intertwined.  Only social ownership of the means of production, workers self-management and a rational socially planned economy can provide a road out of the economic and environmental crisis.  To advance the conditions of workers we submit that this conference resolves and calls upon rail workers to initiate strike actions that stops the Obama/Buffet fossil fuel dependency and perpetuation plan; to call on steel workers, auto and electrical workers to launch the general strike that initiates the retooling and massive implementation of clean energy solutions (solar, wind and geothermal) now!

We can learn well from what railroad union organizer, socialist and wobblie, Eugene V. Debs taught workers over one hundred years ago. On December 10th 1905 at the Grand Central Palace in NYC Debs admonished the crowd of workers and forward thinking people, socialists, anarchists and trade unionists:

“The Industrial Workers is organized— not to conciliate, but to fight the capitalist class. We have no object in concealing any part of our mission; we would have it perfectly understood. We deny that there is anything in common between workingmen and capitalists. We insist that workingmen must organize to get rid of capitalists and make themselves the masters of the tools with which they work, freely employ themselves, secure to themselves all they produce, and enjoy to the full the fruit of their labor.”

He then asked the rhetorical question:  “Why should you be dependent upon a capitalist? Why should this capitalist own a tool he cannot use? And why should not you own the tool without which you cannot live?”

So today we have to ask what has changed?  Is there any reason to make common ground between the workers and the capitalists?  Consider Deb’s analysis of the economics and see if it sounds familiar:

“Every few years there is a panic, industrial paralysis, and hundreds of thousands of workers are flung into the streets; no work, no wages; and so they throng the highways in search of employment that cannot be found; they become vagrants, tramps, outcasts, criminals. It is in this way that the human being degenerates, and that crime graduates in the capitalist system, all the way from petty larceny to homicide.”

The actual workers organizations here today can either declare the truth that the early IWW and Debs fought for as the clarion call of the working class and likewise declare that this assembly also resolves that:  “We deny that there is anything in common between workingmen and capitalists. We insist that workingmen must organize to get rid of capitalists and make themselves the masters of the tools…” and initiate the call for strike action to defeat the capitalist offensive.   Or by lack of declaration turn the political leadership of this assembly back to the NGO’s who organized it.

Today in the shadow of the legacy of Eugene V. Debs, workers face the decades old subservience of the trade union leaders to the ruling class.  Through which the bosses orchestrate their will by control of the labor aristocracy maintaining and perpetuating a backward consciousness across the working class that traps workers behind the misleaders, the so called  progressive layer of Democrats, the  NGO’s that pose as environmentalists  and fake left outfits like the Richmond Progressive Alliance, Socialist Alternative, libcom.org, the IWW (redux) and the Transport Workers Solidarity Committee  who all come together at this conference under the banner of workers safety and environmental concern and conspire to keep the workers separated from their historic transitional socialist  program.

Today this Rail Safety conference (http://www.railroadconference.org/) sponsored  and supported by a host of seemingly pleasant and progressive NGO’s have  tied this assembly by a thousand threads to the big bourgeoisie[i] .  This seemingly educational forum can either serve the interests of the working class or it can serve as the embryo of the Popular Front which shackles labor to capital in all forms of cross class alliances up to and including state power.  If the assembly does not declare for the program of the working class the program of the board members of the NGO’s dominates by default.   If you care to follow the links of the sponsors you will find:

The Lands Council  is backed by co-owner of Keystone Software now owned by Tude City IMS running logistics for big rail, ocean and lake vessels.   Behind the Communities for a Better Environment you have  Liberty Hill Foundation behind which you find the Ford Foundation, the Hewlett Foundation and the California Endowment  which includes the likes Russ Gould who served as Senior Vice President for Wachovia Bank. Dan DeLeon joined The California Endowment in 2008 as Vice President and Chief Financial Officer and he was the L.A. regional vice president of Finance for Time Warner Cable. Climate Solutions at its web site promotes the CERES  Washington/Oregon Business Climate Declaration which is supported by anti-union Whole Foods and Charter School promoter Microsoft and of course CERES  backs the  Obama Climate Action Plan.  The CERES Mobilizing Business Leadership for a Sustainable  World has Anne Stausboll sitting on their board.  She is the CEO of CalPERS and was the chief investment officer of CalPERS at the peak of the real estate bubble and crashed workers  retirements in the bubble after employers withheld contributions  during the “fat years”!  She sits on the advisory Board of the Toigo Foundation which is a tool for the big bourgeoisie governed by the likes of Carlye group and JP Morgan.  Then you have the Washington Environmental Council on whose board Jim Hanna from Starbucks environmental affairs department sits.   And behind it all is the main conference sponsor Backbone Campaign whose board member Sandra VanderVen is the senior organizer at Fuse Washington and still volunteers for MoveOn.org  and in Fuse you have the likes of Dean Nielsen principle of Cerillion N4 Partners  a political consultant who worked for Clinton in 92 and for  Solidarity in Poland, Gore/Lieberman, EMILY’s list, the NEA, NARAL and the Democratic party in several states.

To counter the program of the NGO’s we need our workers program.  It starts with the fight to turn unions into class struggle organs and leads to a workers/labor party that fights for a workers government.  The path is via a Transitional Program  based on a method that exposes the current need (e.g. jobs) and resolves it by shortening the work week 30 hrs. work for 40 hours pay.  The incompatibility of the workers needs with the inability of the capitalists to resolve the crisis leads step by step to the expropriation of the capitalist class.   But unfortunately the working class misleaders from Socialist Alternative,  the  IWW and the TWSC have something in common with their bourgeois partners at this conference, their unwillingness to raise the historic program of the working class. This is how the fake left acts to pave the path for the triumph of the popular front and the defeat of the working class.  Workers need their revolutionary party and world party of socialist revolution to defeat the fakers and break the illusions in the popular front from Richmond California to Cape Town, São Paulo, Athens and Caracas.