Photo of Sammy Yoro, Jr., of Watsonville with two winter hatchery steelhead caught on the American River in January 2011 by Dan Bacher. The Bureau of Reclamation's abysmal management of Folsom Reservoir and the American River during a record drought has resulted in the destruction of the once abundant steelhead population that anglers, Native Americans and environmentalists worked hard for decades to restore. 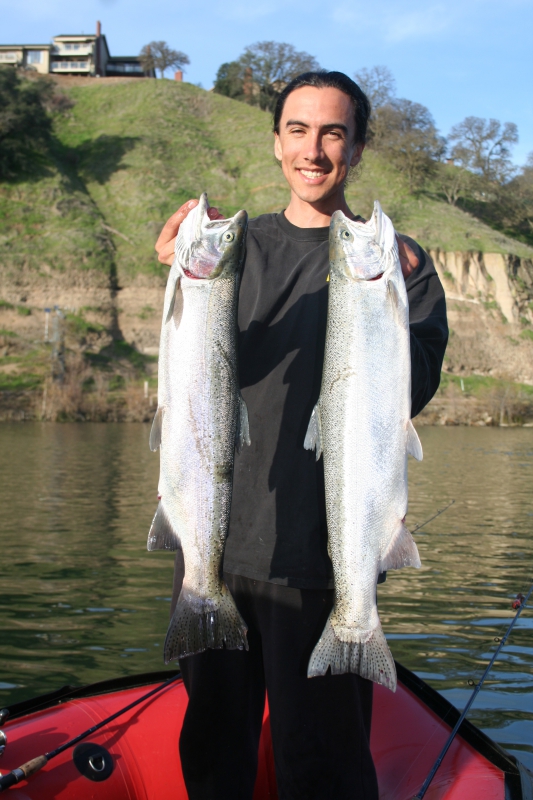 The worst-ever run of steelhead continues to trickle into the American River, Sacramento's imperiled urban jewel.

The Nimbus Fish Hatchery in Rancho Cordova has trapped a total of only 111 adult fish to date. In a good year, the hatchery would have already trapped thousands of adult steelhead.

The previous record low was 200 steelhead in the early 1990s, but this run looks like it will be well below that disastrous return. The peak of the run is over and increasingly fewer fish are expected to return to the hatchery while the ladder remains open.

During 2013 and early 2014, the Bureau of Reclamation drained Folsom to a record low level of 17 percent of capacity in order to export water to corporate agribusiness, Southern California water agencies and big oil companies. The Bureau did this in spite of it being a record drought year. Nimbus Dam releases were reduced to 500 cfs during most of the steelhead season last year.

“The steelhead died for a noble cause - almonds," quipped Bill Jennings, executive director of the California Sportfishing Protection Alliance (CSPA).

"California's almond orchards use almost 9 percent of the state's agricultural water supply, or about 3.5 million acre feet," according to Carolee Krieger, Executive Director of the California Water Impact Network (C-WIN. "That's enough water to supply the domestic needs of the Los Angeles Basin and metropolitan San Diego combined - about 75 percent of the state's population." (http://m.sfgate.com/opinion/openforum/article/Why-almonds-cover-California-5655309.php)

Steelhead are just one of many dozens of species that are massacred in the Delta pumping facilities that export water to corporate agribusiness interests that grow almonds, pistachios and other export crops.

Jennings emphasized that when the storm pulse came down the Sacramento River this year, the state and federal governments turned the Delta pumps on and the fish, including steelhead migrating their way to the ocean, got sucked into the South Delta.

As of February 19, the estimated "incidental take" in the Delta pumps was a total of 542 adipose-clipped steelhead and 69 non-clipped (wild) steelhead.

“The reason why American River steelhead are in collapse is the same reason why Delta smelt, longfin smelt, striped bass and other fish are down to less that 1 percent of their historic levels – overpumping of Delta water,” said Jennings.

In addition, winter run Chinook, an endangered species under the federal and state Endangered Species Acts, have been hammered for the second time in a row. “The water agencies 'saved' water in Shasta to export 1.2 million acre feet of water to the Sacramento Valley settlement contractors last June, July and August,” said Jennings.

The reason? “Storage Conservation,” claimed Randi Field of the Bureau.

Drought is not the reason for the collapse of American River steelhead, winter run Chinook salmon and the near extinction of Delta smelt, as agency officials and some reporters for the mainstream media claim. It is the terrible management of our reservoirs and rivers by the Bureau of Reclamation and the California Department of Water Resources during a record drought that is to blame for record low populations of fish species that once numbered in the millions.

The Delta smelt, an indicator species that demonstrates the health of the Sacramento-San Joaquin River Delta, reached a new record low population level in 2014, according to the California Department of Fish and Wildlife's fall midwater trawl survey released in January. Department staff found a total of only eight smelt at a total of 100 sites sampled each month from September through December. (http://www.indybay.org/newsitems/2015/01/09/18766643.php)

For information about the latest science regarding salmon and steelhead populations on the American River, go to: http://www.dailykos.com/story/2014/12/22/1353546/-Unraveling-The-Mysteries-Of-American-River-Salmon-And-Steelhead
Add Your Comments
LATEST COMMENTS ABOUT THIS ARTICLE
Listed below are the latest comments about this post.
These comments are submitted anonymously by website visitors.