by Dan Bacher
People from all walks of life came from throughout California to Oakland on February 7 to call on Governor Jerry Brown to stop fracking and other extreme energy extraction in the state, stand up to big oil and move California beyond fossil fuels to 100% renewable energy.

Photo of the March for Real Climate Leadership banner at the front of the march by Dan Bacher. 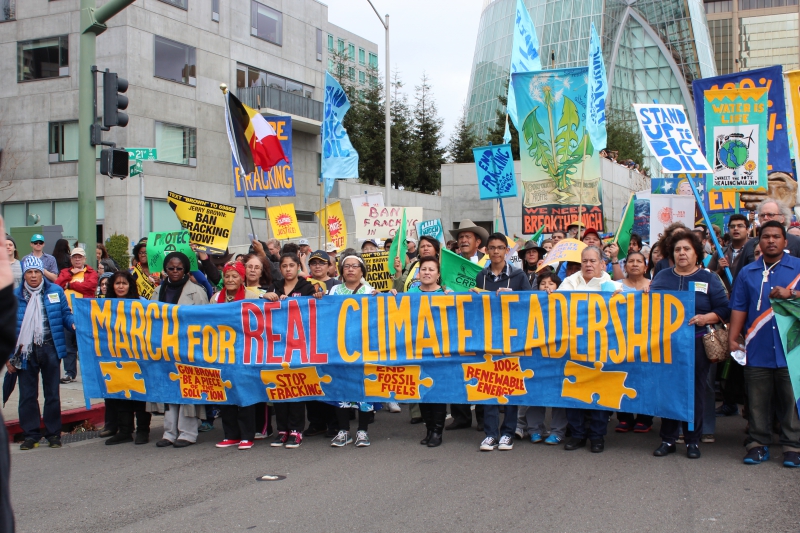 People from all walks of life came from throughout California that day in the "March for Real Climate Leadership" to call on Governor Jerry Brown to stop fracking and other extreme energy extraction in the state, stand up to big oil and move California beyond fossil fuels to 100% renewable energy.

The event began at 11:15 a.m. with a press conference at Frank Ogawa Plaza amphitheater stage at 14th St & Broadway in Oakland, followed at noon by a kick-off rally at the stage. Around 12:30 p.m. the march departed the plaza and headed north on Broadway, east on Grand, then south along Lake Merritt to the Amphitheater.

The march was led by a big Native American and Pacific Islander contingent holding blue and gold and other colorful signs and banners. A group of Delta advocates, including Barbara Barrigan-Parrilla and Stina Va, marched with their banners calling for the Governor, the same one who is supporting the expansion of fracking in California, to stop the giant twin tunnels proposed under the Bay Delta Conservation Plan.

After the march arrived at Lake Merritt, the rally began with a brief speech by Penny Opal Plant of Idle No More, followed by a chant by Native Hawaiian sisters, a prayer, poetry and a wide array of speakers focusing on the environmental and health impacts of fracking on communities throughout the state.

The event also featured a flotilla on Lake Merritt with a 25-foot banner rising from the lake; marching bands; a bicycle contingent/bike-powered sound system; and marchers wearing costumes representing animals threated by extinction due to climate change.

After the rally, the event organizers held an after-party at La Pena Cultural Center at 3105 Shattuck Ave in Berkeley featuring reggae vocalist Bobby Tenna and the Skench Band.

According to organizers, the nationwide movement against fracking and extreme energy extraction gained "tremendous momentum" in December, when, persuaded by years of organized public pressure and crystal-clear evidence that fracking is a serious public health risk, New York Governor Andrew Cuomo announced a statewide ban on fracking. As pressure mounts on Gov. Brown to follow suit, protesters from across California directed even more attention his way with the March for Real Climate Leadership.

Just two days after the protesters marched through the streets of Oakland, documents released by state regulators revealed that thousands of oil and gas wells and hundreds of illegally operating oil industry waste-disposal wells are injecting fluids into aquifers in violation of state law and the federal Safe Drinking Water Act.

“Gov. Jerry Brown must immediately ban fracking and halt the use of illegal injection wells in California,” said Adam Scow, California director of Food and Water Watch, on behalf of Californians Against Fracking. “This fiasco shows that the state simply cannot handle the massive toxic wastewater problem produced by fracking and oil and gas development. It shows that the state has not complied with the minimum protections required by federal law. All unsafe and illegal injection needs to stop immediately.”

The documents were released at a time when California's fish, waterways and environment are in state of crisis. The Delta smelt, the indicator species that demonstrates the health of the Bay-Delta Estuary, is near extinction, American River steelhead are in collapse and Central Valley salmon are imperiled, due to abysmal management by the Brown and Obama administration's of the state's rivers and reservoirs during a record drought.

To make matters worse, as fracking is polluting aquifers throughout the state, Governor Jerry Brown is rushing the construction of the Bay Delta Conservation Plan (BDCP) to build the peripheral tunnels, the most environmentally devastating public works project in California history. The construction of the massive tunnels under the Delta would hasten the extinction of Central Valley Chinook salmon, Delta and longfin smelt, green sturgeon and a host of other species, as well as imperil the salmon and steelhead populations on the Trinity and Klamath rivers.

It essential to understand that the expansion of fracking in California, the twin tunnels, the federal plan to raise Shasta Dam and the draining of northern California reservoirs during a record drought are all part of a larger plan, the "Brown Water Plan," as Caleen Sisk, Chief and Spiritual Leader of the Winnemem Wintu Tribe describes it, to privatize the public trust, water and natural resources in California. Fracking is part of a larger neo-liberal strategy to plunder California and the planet.

For radio coverage of Saturday's march, go to: http://fsrn.org/2015/02/californians-call-for-statewide-fracking-ban/ 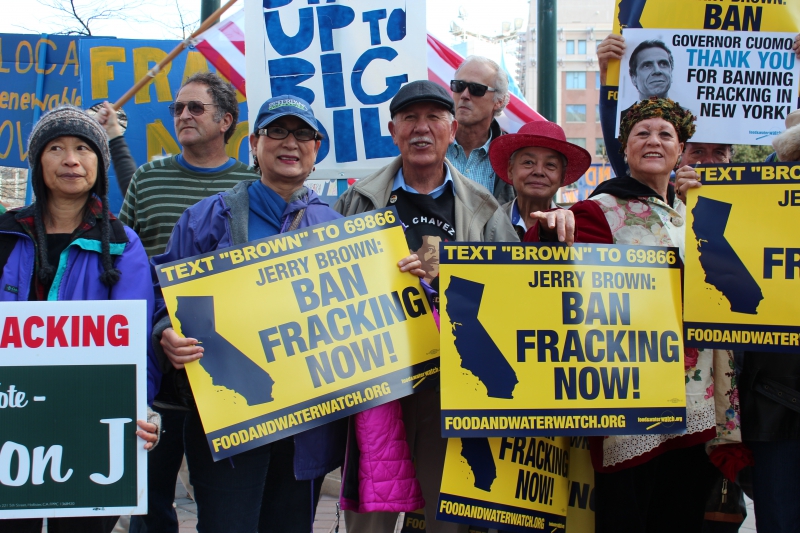 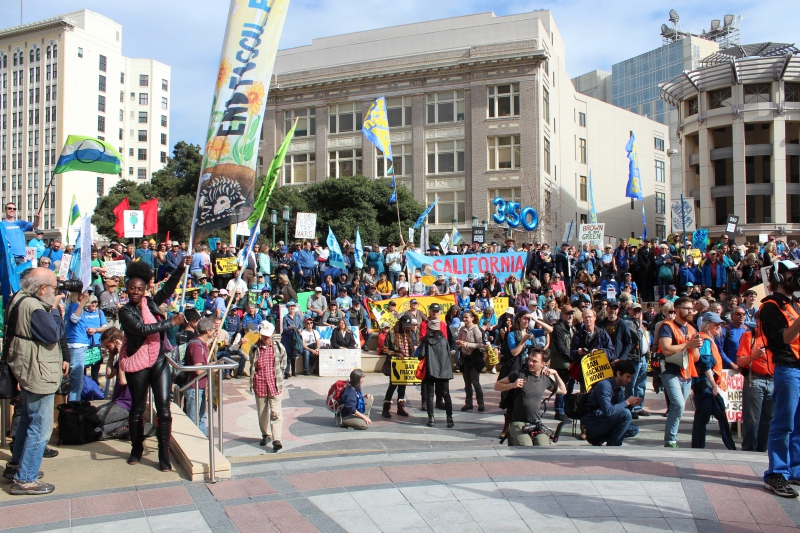 original image (5184x3456)
After a press conference, the rally organizers held a rally in the plaza. Photo by Dan Bacher.
§Front of March
by Dan Bacher 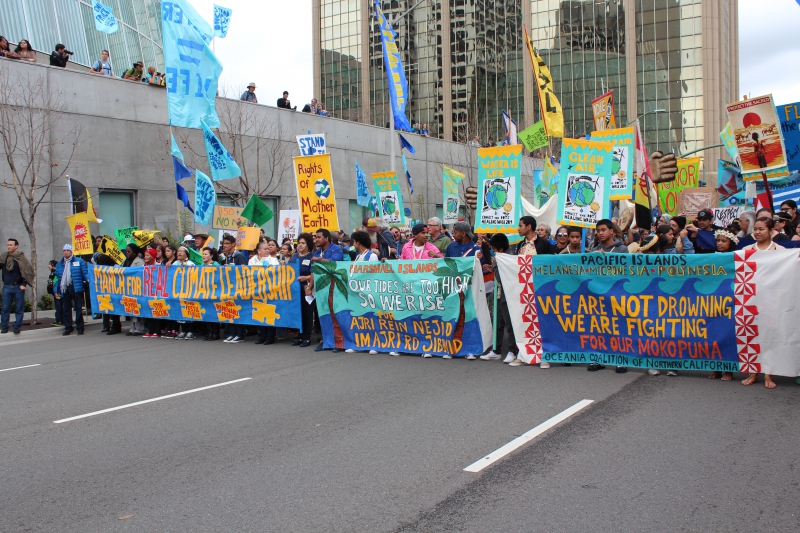 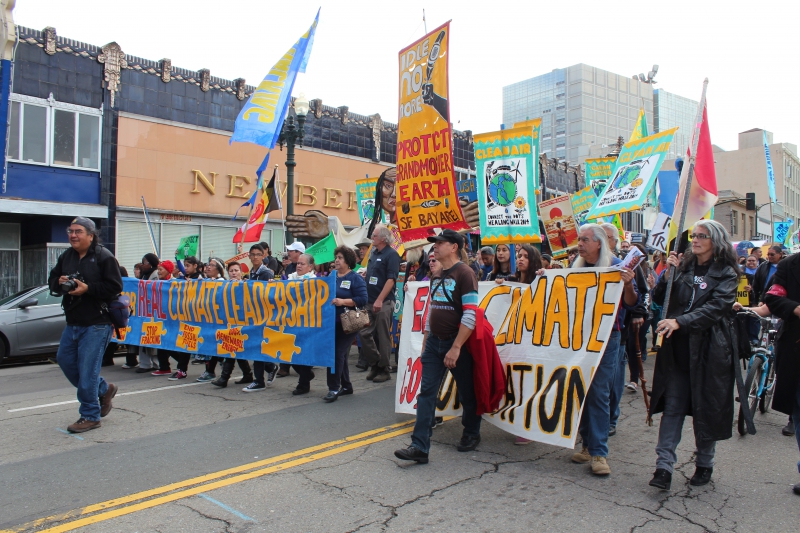 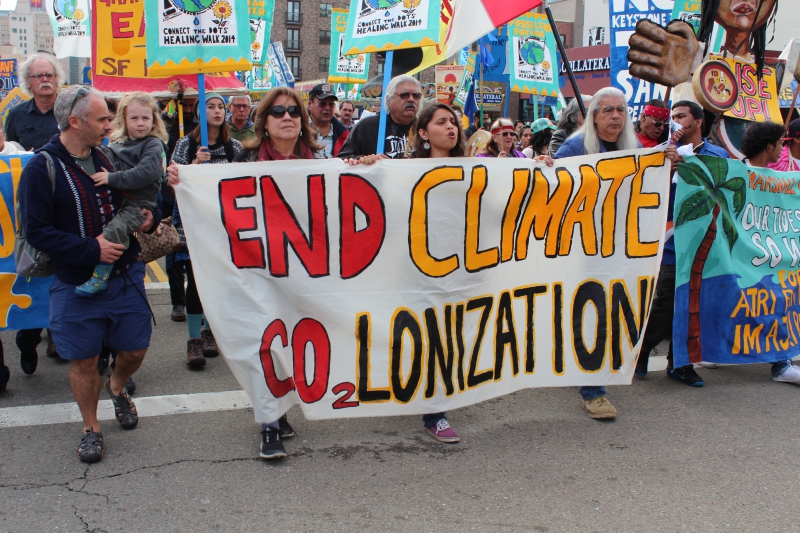 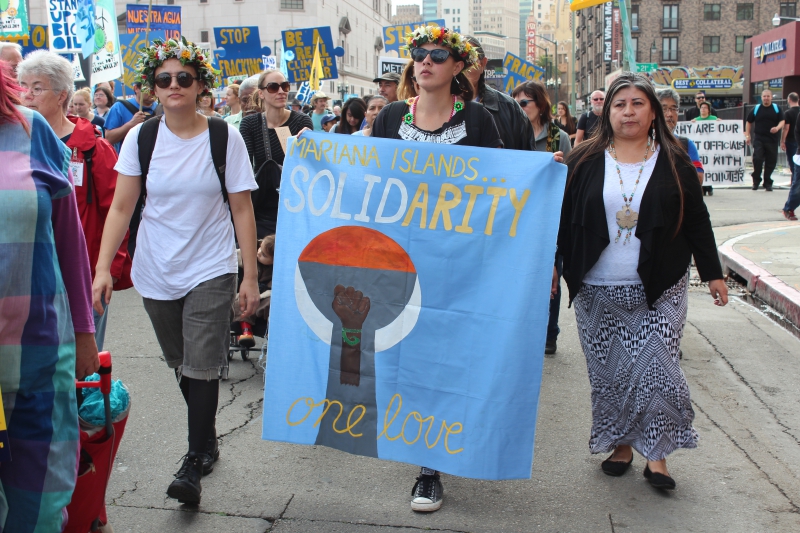 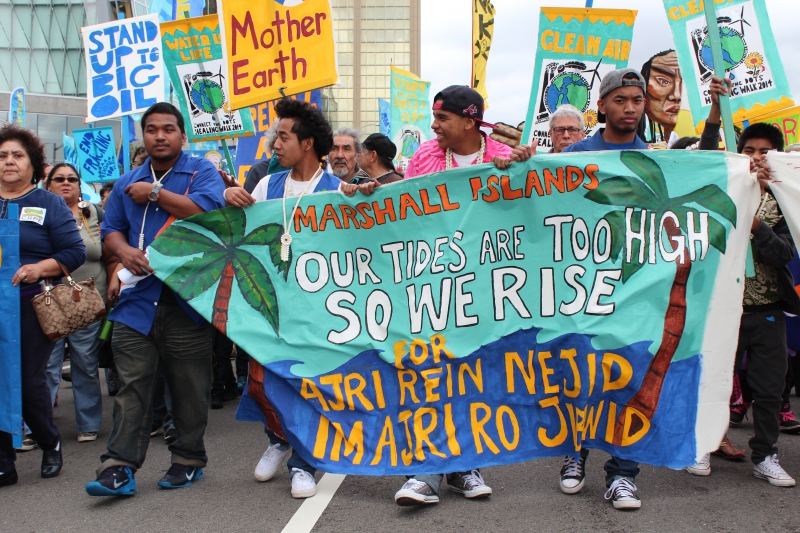 original image (5184x3456)
Marshall Islanders proclaim, "Our Tides Are Too High, So We Rise." Photo by Dan Bacher.
§Pacific Islanders
by Dan Bacher 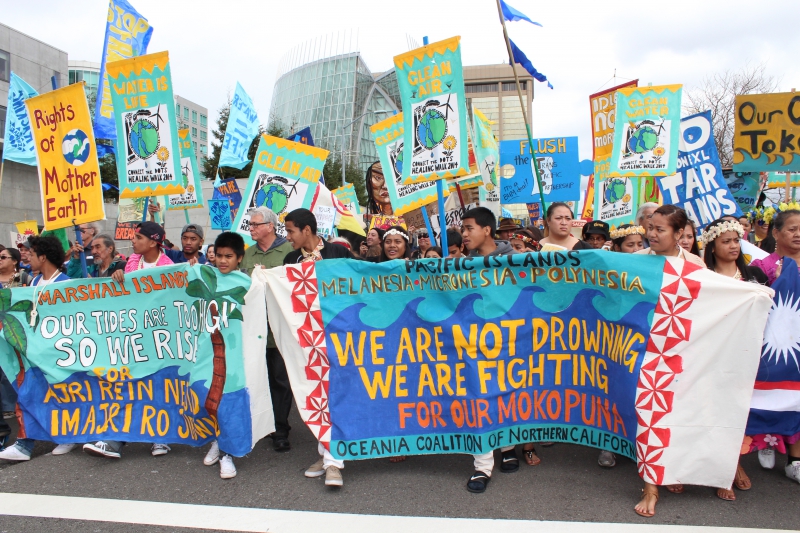 original image (5184x3456)
A group of Pacific Islanders in the March for Real Climate Leadership. Photo by Dan Bacher.
§350.org
by Dan Bacher 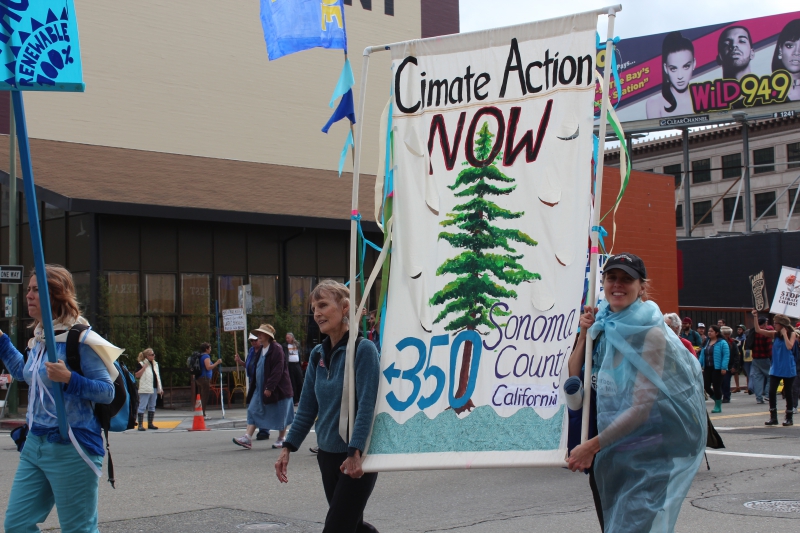 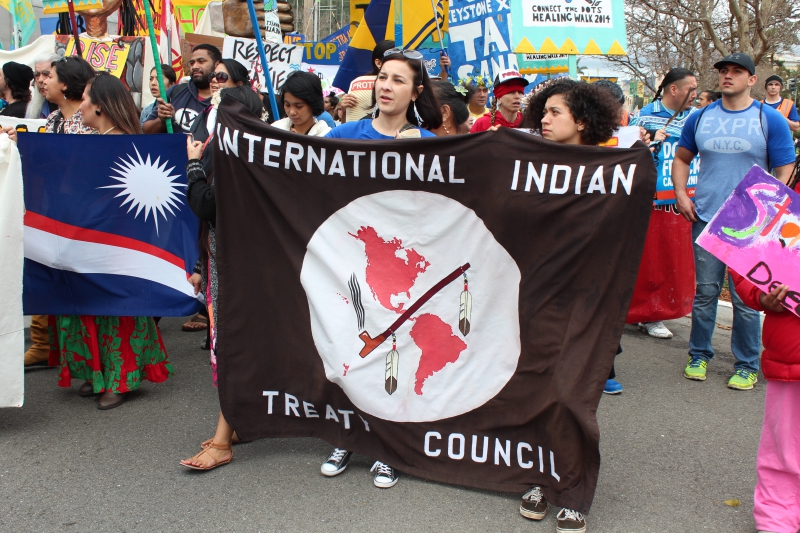 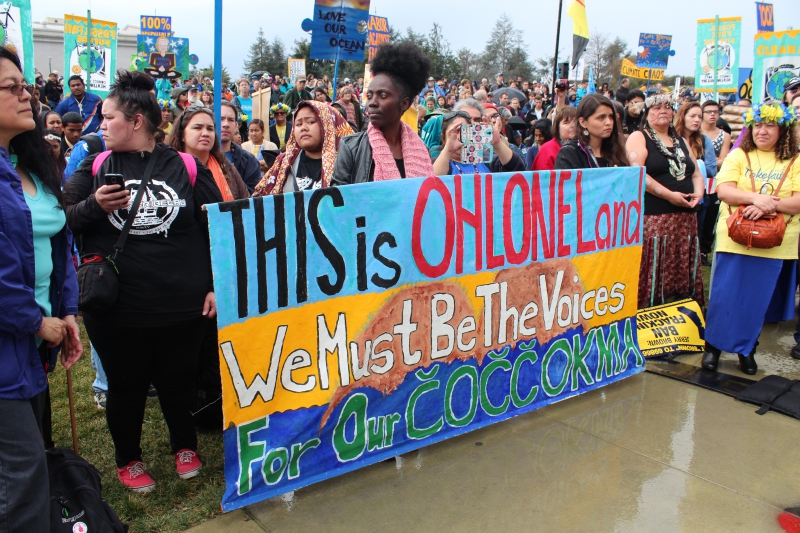 original image (5184x3456)
The Ohlone remind people that they are on Ohlone Land. Photo by Dan Bacher.
§March near Merritt
by Dan Bacher 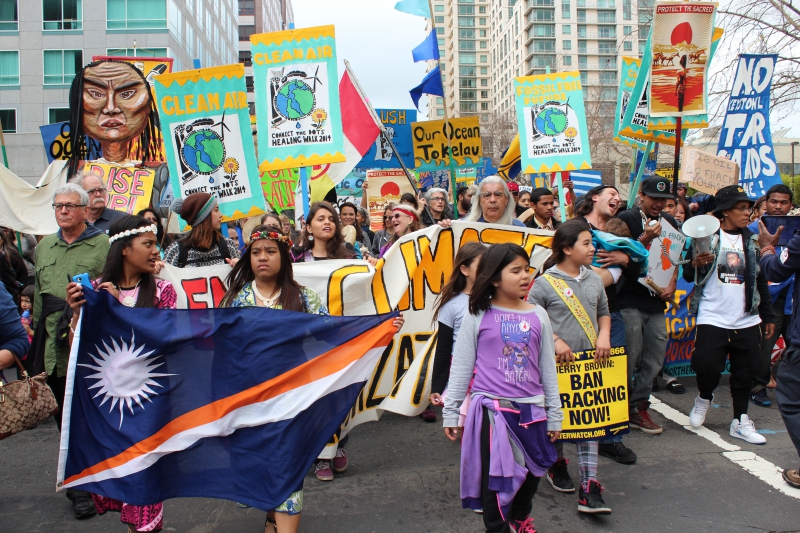 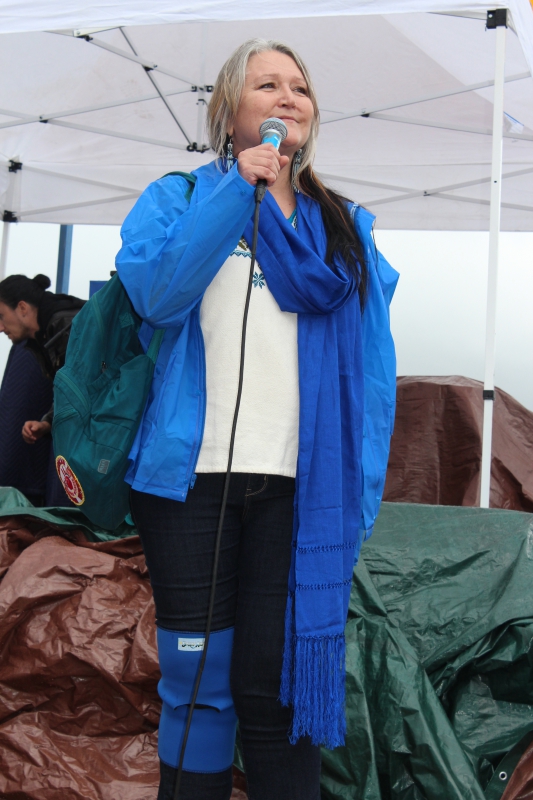 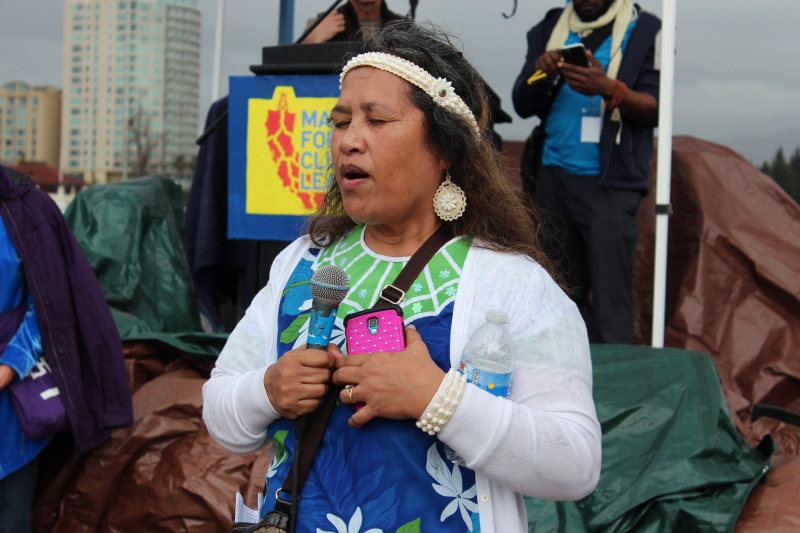 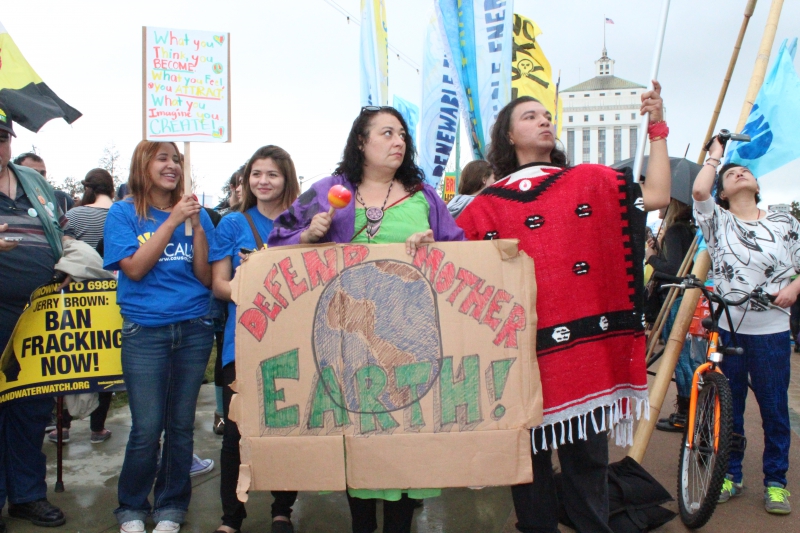 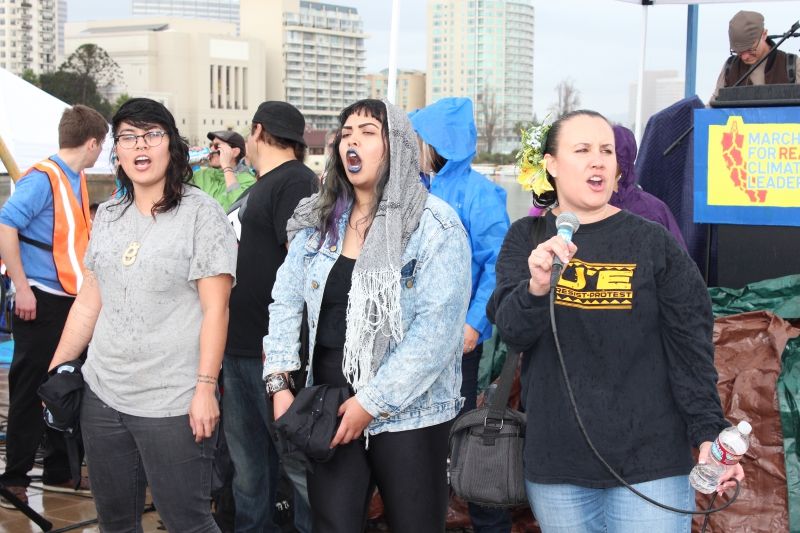 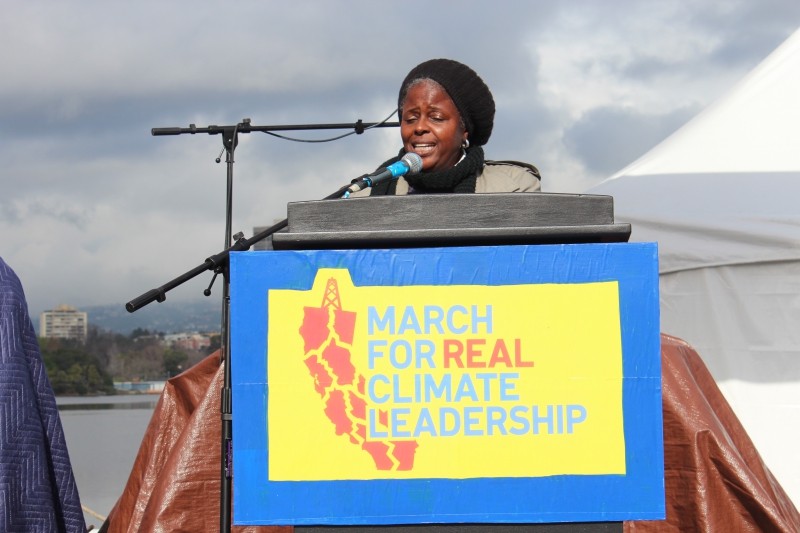 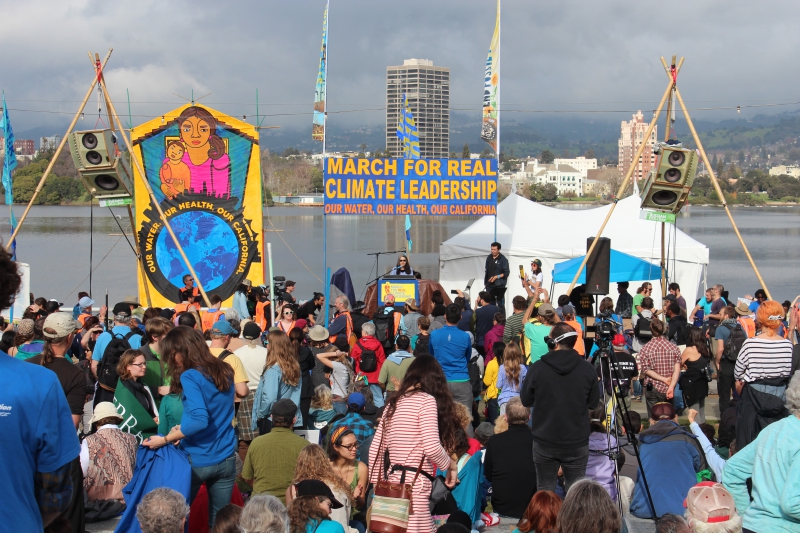 original image (5184x3456)
A view of the rally at Lake Merritt. Photo by Dan Bacher.
§Richmond Residents
by Dan Bacher 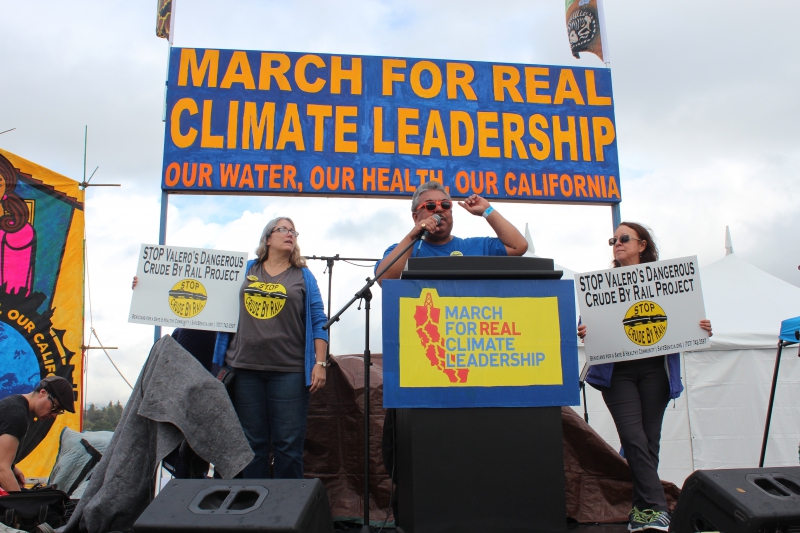 original image (5184x3456)
Richmond residents, including Andres Soto (center), discuss their successful campaign to defeat the Chevron candidates in the 2014 City Council election. Photo by Dan Bacher.
Add Your Comments
Support Independent Media
We are 100% volunteer and depend on your participation to sustain our efforts!