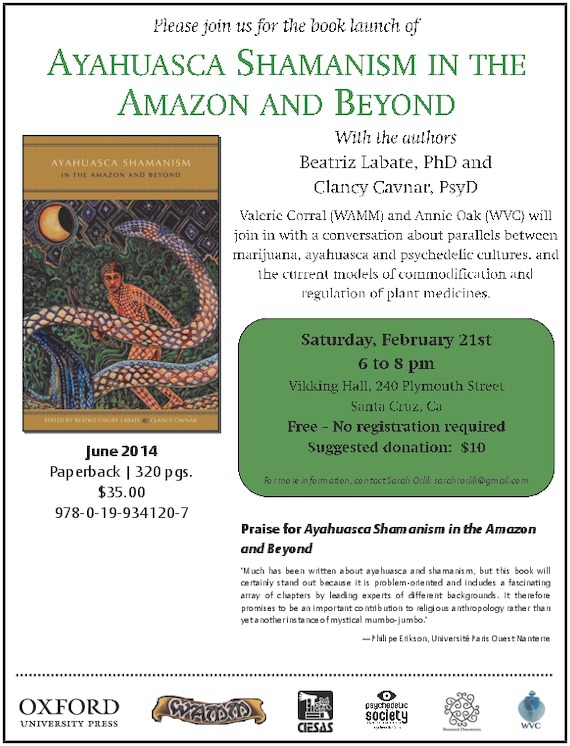 Download PDF (506.0KB)
Beatriz Labate will present an overview of the book Ayahuasca Shamanism in the Amazon and Beyond co-edited by Beatriz Caiuby Labate and Clancy Cavnar, and published through Oxford University Press in 2014. The book discusses how Amerindian epistemology and ontology related to certain indigenous shamanic rituals of the Amazon spread to Western societies, and how indigenous, mestizo, and cosmopolitan cultures have dialogued with and transformed these forest traditions. The collection also focuses on how shamanic rituals have been spreading and developing in post-traditional urban contexts throughout the world. Special attention is given to ayahuasca, a psychoactive drink usually composed of two plants, the vine Banisteriopsis caapi and leaves of the Psychotria viridis bush.

Ayahuasca use has spread beyond its Amazonian origin and instigated a variety of legal and cultural responses in the countries it has spread to. The chapters in the book address some of the ways these responses have influenced ritual design and performance in traditional and non-traditional contexts, including:

* How displaced indigenous people and rubber tappers are engaged in creative reinvention of rituals, and how these rituals help build ethnic alliances and cultural and political strategies for their marginalized position.

* Modernity’s fascination with “tradition” and the “other.” This phenomenon is directly tied to important classic and contemporary issues in anthropology, including the relationship between the expansion of ecotourism and ethnic tourism, recent indigenous cultural revivals, and the emergence of new ethnic identities.

* Trends in the commodification of indigenous cultures in post-colonial contexts, and the combination of shamanism with a network of health and spiritually related services.

The previously unpublished ethnographies and analysis collected in these chapters add to the understanding of the role of ritual in mediating the encounter between indigenous traditions and modern societies.
http://visionarycongress.org/a-conversatio...
Add Your Comments
Support Independent Media
We are 100% volunteer and depend on your participation to sustain our efforts!