Add an Event
Newswire
Calendar
Features
Home
Donate
From the Open-Publishing Calendar
From the Open-Publishing Newswire
Indybay Feature
Publish to Newswire
Add an Event
Related Categories: Santa Cruz Indymedia | Health, Housing & Public Services | Police State & Prisons
Taking the Sleepbusters to Court
by Robert Norse (rnorse3 [at] hotmail.com)
Tuesday Feb 10th, 2015 12:18 PM
On the advice of an activist attorney, HUFF (Homeless United for Friendship and Freedom) has begun helping homeless people victimized by the City's Sleeping Ban law to go to Small Claims Court for sleep deprivation damages. Some of the background is set forth in the speech below I also include a volunteer sign-up list. Those interested in helping with this project should e-mail me or call HUFF at 831-4232-4833. You can also e-mail City Council to end the Sleeping Ban or call them at 420-5020. 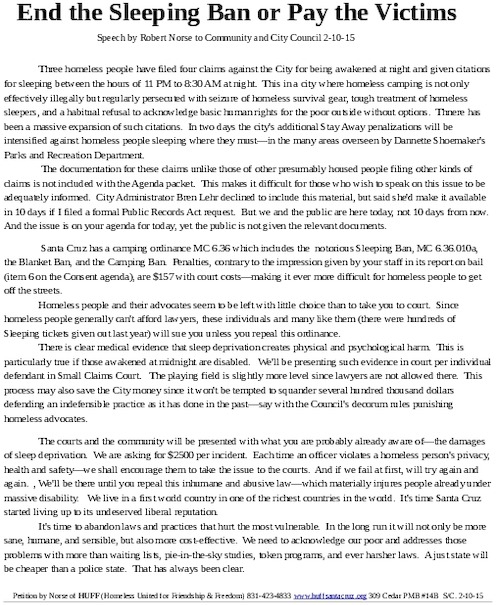 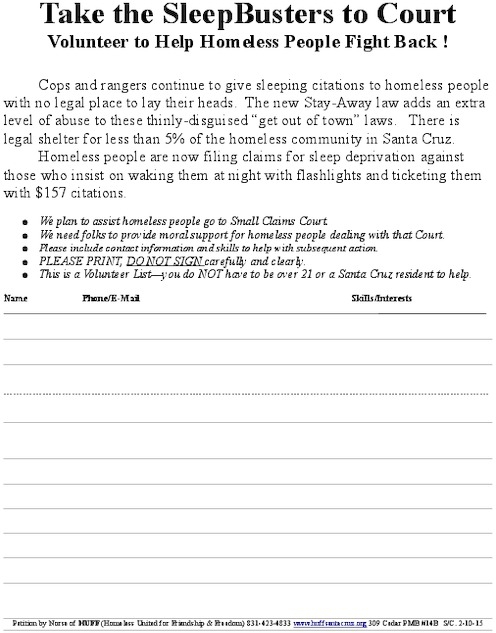 Three homeless people have filed four claims against the City for being awakened at night and given citations for sleeping between the hours of 11 PM to 8:30 AM at night. This in a city where homeless camping is not only effectively illegally but regularly persecuted with seizure of homeless survival gear, tough treatment of homeless sleepers, and a habitual refusal to acknowledge basic human rights for the poor outside without options. Thnere has been a massive expansion of such citations. In two days the city's additional Stay Away penalizations will be intensified against homeless people sleeping where they must—in the many areas overseen by Dannette Shoemaker's Parks and Recreation Department.

The documentation for these claims unlike those of other presumably housed people filing other kinds of claims is not included with the Agenda packet. This makes it difficult for those who wish to speak on this issue to be adequately informed. City Administrator Bren Lehr declined to include this material, but said she'd make it available in 10 days if I filed a formal Public Records Act request. But we and the public are here today, not 10 days from now. And the issue is on your agenda for today, yet the public is not given the relevant documents.


Santa Cruz has a camping ordinance MC 6.36 which includes the notorious Sleeping Ban, MC 6.36.010a, the Blanket Ban, and the Camping Ban. Penalties, contrary to the impression given by your staff in its report on bail (item 6 on the Consent agenda), are $157 with court costs—making it ever more difficult for homeless people to get off the streets.

Homeless people and their advocates seem to be left with little choice than to take you to court. Since homeless people generally can't afford lawyers, these individuals and many like them (there were hundreds of Sleeping tickets given out last year) will sue you unless you repeal this ordinance.

There is clear medical evidence that sleep deprivation creates physical and psychological harm. This is particularly true if those awakened at midnight are disabled. We'll be presenting such evidence in court per individual defendant in Small Claims Court. The playing field is slightly more level since lawyers are not allowed there. This process may also save the City money since it won't be tempted to squander several hundred thousand dollars defending an indefensible practice as it has done in the past—say with the Council's decorum rules punishing homeless advocates.


The courts and the community will be presented with what you are probably already aware of—the damages of sleep deprivation. We are asking for $2500 per incident. Each time an officer violates a homeless person's privacy, health and safety—we shall encourage them to take the issue to the courts. And if we fail at first, will try again and again. , We'll be there until you repeal this inhumane and abusive law—which materially injures people already under massive disability. We live in a first world country in one of the richest countries in the world. It's time Santa Cruz started living up to its undeserved liberal reputation.

It's time to abandon laws and practices that hurt the most vulnerable. In the long run it will not only be more sane, humane, and sensible, but also more cost-effective. We need to acknowledge our poor and addresses those problems with more than waiting lists, pie-in-the-sky studies, token programs, and ever harsher laws. A just state will be cheaper than a police state. That has always been clear.

Petition by Norse of HUFF (Homeless United for Friendship & Freedom) 831-423-4833 http://www.huffsantacruz.org 309 Cedar PMB #14B S/C. 2-10-15
Add Your Comments
LATEST COMMENTS ABOUT THIS ARTICLE
Listed below are the latest comments about this post.
These comments are submitted anonymously by website visitors.