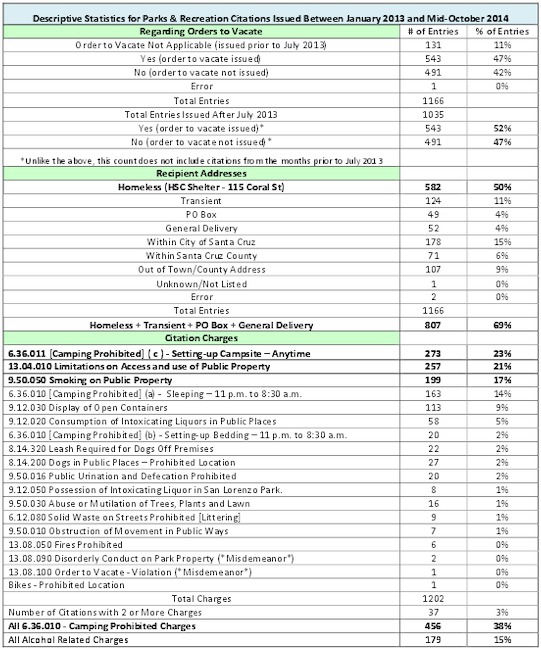 Download PDF (95.8KB)
The first PDF contains statistics on Parks & Recreation citations issued between January 2013 and mid-October 2014. Please note that I've provided two counts of orders to vacate. The first count includes the time period immediately before the order to vacate ordinance was enacted, so it divides the citations into the categories of "Order to vacate not applicable", "Yes (order to vacate issued), "No (order to vacate not issued)," and "Error" (data missing or not properly recorded). The second count does not include the earlier time period, thus it reflects a more accurate account of how many orders to vacate were or were not issued by Santa Cruz Park Rangers over the last year and a half. At the bottom of this document, you will also find a condensed version of data provided by the SCPD.

In regards to statistical significance and the chi-test for independence:
A result listed as statistically significant means that the odds of someone receiving a stay away (in general or for a particular charge) is related to their housing status (i.e. not independent of their housing status). This was determined through a statistical formula that compared the observed number of stay-aways for each group (homeless vs housed) with the expected number of stay-aways for each group and seeing if there was a difference that was so big it couldn't be explained by random chance.

The second PDF is a "cleaned-up" version of the data I collected. You'll notice that information such as names, dates, and time of day are not included in this document. It was not possible to collect all of that information for every single citation, so those details have been removed so as not to clutter the spreadsheet. I should also clarify that because there were fewer citations issued in 2013 than 2014, it was possible to separate out citations that were issued before July 2013 and citations that were issued July 2013 or later, without specifying the exact day or time the citations were issued. Hence, I am still able to provide information on how many citations were not eligible for orders to vacate. 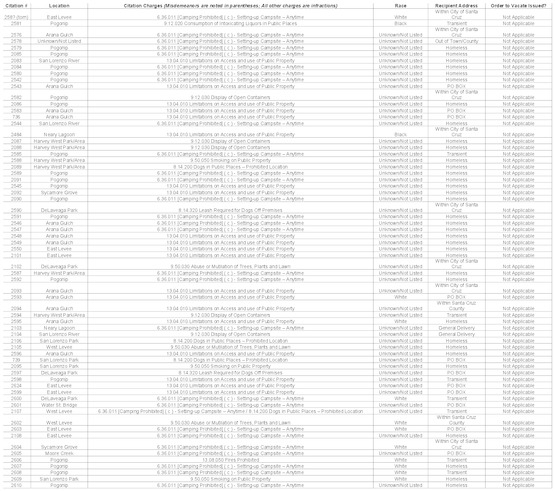 For example, there is also probably close to a 100% correlation between being homeless and being harassed by police for sleeping under bridges (everyone removed from sleeping under a bridge is homeless. But that's not a matter of "targeting" but the extreme rarity of anybody not homeless choosing to sleep under a bridge.

Parks are SLIGHTLY different. There ARE some non homeless people who might make it a point of not obtaining a permit for park use and/or camping in unauthorized places. But these are only a small percentage of those doing things like that except when there is a mass camping action in a park.

In other words, you already KNOW (or should know) that there is an extremely strong correlation between unauthorized sleeping in a park and homelessness. So if the authorities bother people who are sleeping in a park without authorization that's not evidence of "targeting". They CAN'T bother the non-homeless people sleeping in the park because they aren't there.

"I'm just saying that for the rangers, etc. to harass them isn't "targeting"."

In fact, it is targetting, as are the ordinances and laws created and used to provide immunity to those perpetratng the targetted harassing. Such targetting is eventually considered unconstitutional (see also: http://caselaw.findlaw.com/us-9th-circuit/1670153.html http://cdn.ca9.uscourts.gov/datastore/opinions/2014/06/19/11-56957.pdf http://www.ca9.uscourts.gov/media/view.php?pk_id=0000012040), although the damage can take decades to repair (and restitution is rare).

Perhaps it's the shameless bigotry by supporters of the hate driven targetting that is the most disgusting.

Repent!
http://PeaceCamp2010insider.blgspot.com/
Add a Comment
§Correlation
by Razer Ray
Thursday Feb 5th, 2015 1:16 PM
So by logical extension the law itself IS INTENDED to be SELECTIVELY ENFORCED PERIOD, whether intentional targeting by the police is intended or not, the LAW targets the homeless.

Add a Comment
§Clarification of the "concept"
by Raven Davis
Thursday Feb 5th, 2015 2:51 PM
Mike, you've made some good points. However, you seemed to have misunderstood what I've put forth here.

In statistics, correlation has a very particular definition. The chi-test does not determine correlation, it determines independence. (i.e. Can you use variable A to predict variable B? Or are these two variables independent of each other?) Moreover, the test in question was about stay-away orders, not camping citations.

As you pointed out, even without stats, common sense tells us that it's highly likely that a homeless person would receive a camping citation. Most homeless people have to camp. Camping is illegal. Rangers and officers are required to give citations for illegal activities.

They are not, however, required to give people orders to vacate (stay aways); that decision is left to their discretion. So it seems meaningful when homeless people receive stay aways at a higher rate than house people for committing the same crime. And that's what the test for independence shows.

In my write up, also posted on IndyBay, I talk about what you said. I say that the large amount of citations, especially for camping, given to homeless people makes sense. But I also state that it doesn't explain disparate treatment when it comes to stay-aways. We don't know how cops and rangers are choosing to give stay-aways out, yet there's a clear relationship between housing status and stay away issuance. Thus, it is possible, though not wholly proven, that they are intentionally giving more stay aways to homeless people. than housed people.
Add a Comment
§Look...It's fukin targeting
by mr me
Thursday Feb 5th, 2015 3:58 PM
So now you are probably going to tell me it is NOT illegal to walk. But I walk all over the United States and I say it is. Now ANYBODY might try to walk from Maine to San Diego BUT it super dooper likely that the walker is a hitchhiker and ALL hitchhikers ARE homeless MANY homeless have warrants for their arrest for things like "displaying an open container" THEREFORE shaking down someone walking has a very good chance of finding someone with a warrant and an almost 100% chance of finding a homeless person.

Who gives a fuk about the statistical methods...homeless people are being targeted. DUH?
Add a Comment
§Re: Clarification of the "concept"
by Razer Ray
Friday Feb 6th, 2015 9:49 AM
Raven: "We don't know how cops and rangers are choosing to give stay-aways..."

One afternoon a friend and I witnesses a park ranger extricate a junkie who had been spotted babbling mindlessly with a needle sticking in his arm from the men's bathroom at San Lorenzo park, and the 'ranger' simply told him to leave the park.

IMHO, the authorities WANT this behavior to continue *as much as possible* because it validates their lawmaking allowing them to chase away all the comparatively less 'offensive' elements (campers etc) first leaving the easy-money-for-the-police-state drugwars victims to PERHAPS be rounded up at a future time.

Drug users and alcoholics make EXCELLENT useful idiots for city lawmakers creating "nuisance ordinances" that are then applied to others.

I also believe this is a perception management tactic is used in the "Downtown Shopaholic District"
Add a Comment
Support Independent Media
We are 100% volunteer and depend on your participation to sustain our efforts!