Add an Event
Newswire
Calendar
Features
Home
Donate
From the Open-Publishing Calendar
From the Open-Publishing Newswire
Indybay Feature
Publish to Newswire
Add an Event
Related Categories: California | Central Valley | Santa Cruz Indymedia | Environment & Forest Defense | Government & Elections | Health, Housing & Public Services
Anti-fracking coalition calls for shut down of toxic injection wells
by Dan Bacher
Monday Feb 2nd, 2015 6:41 PM
The permission to pollute was granted because of the capture of the state's regulatory apparatus by Big Oil and other corporate interests. In fact, the oil industry not only exerts its enormous influence by spending millions and millions of dollars on lobbying and campaign contributors, but is able to get its officials and allies placed on state and federal regulatory panels.

Photo from press conference by Californians Against Fracking at the State Capitol in Sacramento on January 29. Photo by Dan Bacher. 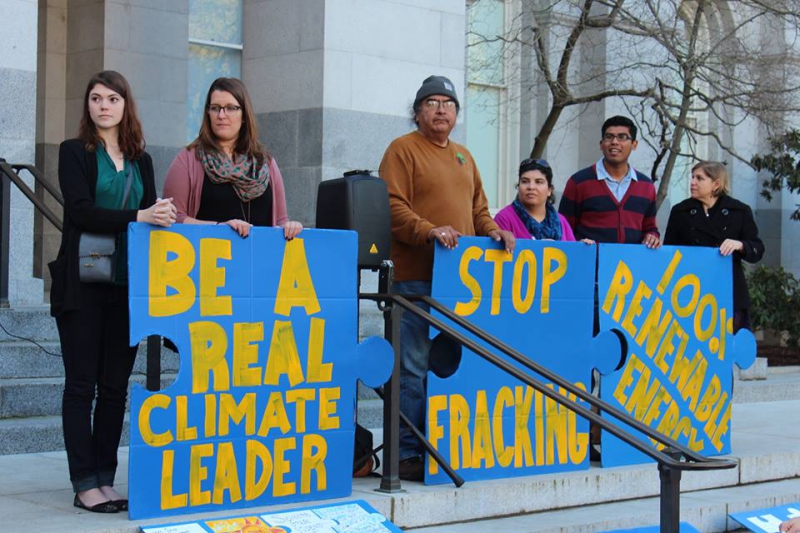 A coalition of anti-fracking groups and the Center for Biological Diversity today urged the federal Environmental Protection Agency (EPA) to immediately shut down hundreds of injection wells that are illegally dumping toxic oil industry wastewater into scores of California aquifers during the midst of a record drought.

Oil and gas companies over decades used more than 170 waste disposal wells to inject oil and gas wastewater into dozens of aquifers containing potable water, in violation of state and federal law, the San Francisco Chronicle reported. The majority of these violations are located in California’s Central Valley, while others are near San Luis Obispo and Santa Maria. (http://www.sfchronicle.com/business/article/State-let-oil-companies-taint-drinkable-water-in-6054242.php)

"Oil companies in drought-ravaged California have, for years, pumped wastewater from their operations into aquifers that had been clean enough for people to drink," said David Baker, reporter. "They did it with explicit permission from state regulators, who were supposed to protect the increasingly strained ground water supplies from contamination."

The permission to pollute was granted because of the capture of the state's regulatory apparatus by Big Oil and other corporate interests. In fact, the oil industry not only exerts its enormous influence by spending millions and millions of dollars on lobbying and campaign contributors, but is able to get its officials actually placed on state and federal regulatory panels.

In one of the most egregious examples of the conflicts of interest that infest California environmental politics, Catherine Reheis-Boyd, President of the Western States Petroleum Association (WSPA), served as the CHAIR of the Blue Ribbon Task Force to create so-called "marine protected areas" in Southern California. The head lobbyist for the oil industry's campaigns to expand fracking and eviscerate California's clean water and air laws also sat on the task forces to create so-called "marine protected areas" on the Central Coast, North Central Coast and North Coast.

This latest report on the fracking disaster that has hit California follows an emergency shutdown of multiple injection wells in Kern County last year due to concern from state regulators that the wells had contaminated groundwater supplies, adding to the growing calls for Governor Jerry Brown, known as "Big Oil Brown" by many environmental activists, to immediately shut down illegal injection wells.

In a statement issued on behalf of Californians Against Fracking, Dan Jacobson, state director for Environment California, said, “Years of negligence by state officials and wanton disregard by the oil industry for the law have led us to water pollution crisis in California and a clear indication that state regulators are not willing to protect California’s farmers and families from harsh chemicals that are illegally permeating our water supply. Put simply, California regulators are not up to the task of managing safe wastewater disposal and cede residents’ safety and health to oil and gas production."

"We call on Gov. Brown immediately to shut down injection wells that are illegally polluting our groundwater and to issue a moratorium on fracking and other dangerous oil and gas activities, which create large volumes of toxic wastewater. Preserving and protecting California’s water and farms is not something to take lightly," he concluded.

The Center for Biological Diversity also called on the EPA to "immediately shut down" hundreds of injection wells that are illegally dumping toxic wastewater into scores of California aquifers, including some that supply water for drinking and farming irrigation.

Today’s letter urges the EPA to issue an administrative order requiring operators of these disposal wells to cease operations to protect aquifers from further damage and comply with the federal Safe Drinking Water Act.

The Center said recently revealed documents from the EPA and the state’s Division of Oil, Gas and Geothermal Resources show that state and federal regulators have investigated at least 532 oil industry injection wells across the state — from Monterey County and sites near San Luis Obispo and Santa Barbara to Kern and Los Angeles counties — over concerns they are illegally dumping wastewater into scores of aquifers containing water that should be protected under state and federal laws.

Last summer, the state’s oil division issued emergency shutdown orders for multiple injection wells in Kern County after it came to light that they were injecting wastewater into aquifers containing high-quality drinking water. But she said the newly revealed documents show that hundreds of other injection wells dumping wastewater into protected aquifers are still in operation.

An EPA letter from December 2014 reveals the seriousness of the problem, but fails to order the immediate shut-down of all wells injecting into protected aquifers.

“Given the need to resolve the program’s serious deficiencies in a timely matter, EPA has strengthened oversight and support of the program,” the EPA letter says.

"Oil industry wastewater is an extremely salty fluid that typically contains a wide range of contaminants and dangerous chemicals associated with oil production," Siegel said. "It can also contain fracking chemicals linked to cancer and other serious health concerns."

Up to half of all new oil wells in California are fracked, according to a recent study. Flowback fluid from fracked wells often contains dangerous levels of cancer-causing benzene, according to state-mandated tests.

“This water contamination crisis is just the latest consequence of the state’s failure to protect Californians from oil industry pollution,” said Siegel. “Gov. Brown hasn’t heeded calls to protect our air, water and health, so we need the EPA to take immediate action.”

For more information, go to: http://www.biologicaldiversity.org/

In other fracking news, concerned residents from communities across California gathered on the steps of the State Capitol in Sacramento on Wednesday, January 28, to voice their concerns about the health and environmental risks associated with fracking and dangerous oil extraction techniques, and an increase in the number of trains carrying potentially explosive oil through communities across the state. The group called on Gov. Jerry Brown to take actions to protect Californians.

The Sacramento event is the final leg of a statewide tour during which hundreds of community members participated in nightly town halls across the state. Throughout the tour, organizers collected messages to Brown from residents about the negative effects of oil drilling in their communities. They delivered those messages to Brown’s Capitol office on Wednesday.

On Feb. 7 thousands of Californians will converge in Oakland – Brown’s home town – for the "March for Real Climate Leadership." For more information, go to:http://marchforclimateleadership.org

WHAT: The March for Real Climate Leadership: Our Water, Our Health, Our California
WHEN: 11:30 am, February 7, 2015
WHERE: Frank Ogawa / Oscar Grant Plaza, 14th & Broadway, Oakland, California

There are many powerful industries based in California, ranging from the computer and high tech industry to corporate agribusiness, but no industry has more influence over the state's environmental policies than Big Oil.

The oil industry has spent over $70 million on lobbyists in California since January 2009, including record amounts of money spent during the third quarter of 2014, according to a recent report written by Will Barrett, the Senior Policy Analyst for the American Lung Association in California. (http://www.lung.org/associations/states/california/advocacy/climate-change/oil-industy-lobbying-report.pdf)

The Western States Petroleum Association (WSPA) the most powerful corporate lobbying organization in Sacramento, topped the oil industry spending with a total of $31,179,039 spent on lobbying since January 1, 2009. Chevron was second in lobbying expenses with a total of $15,542,565 spent during the same period.

And this doesn’t include spending on ballot measures or the recent election, including Chevron spending $3 million (unsuccessfully!) to elect “their” candidates to the Richmond City Council. Big Oil also dumped $7.6 million into defeating a measure calling for a fracking ban in Santa Barbara County and nearly $2 million into an unsuccessful campaign to defeat a measure banning fracking and other extreme oil extraction techniques in San Benito County.

Not only does Big Oil spend many millions every year on lobbying and campaign contributions, but its representatives also serve on state and federal regulatory panels and fund "Astroturf" campaigns to eviscerate environmental laws.

In one of the most overt conflicts of interest in California history, Catherine Reheis-Boyd, President of the Western States Petroleum Association, served as the Chair of the Marine Life Protection Act (MLPA) Blue Ribbon Task Force to create fake "marine protected areas" in Southern California. Not only did she serve on this panel, but she also was a member of the task forces for the Central Coast, North Central Coast and North Coast.

These so-called "marine protected areas" fail to protect the ocean from fracking, offshore oil drilling, pollution, military testing, corporate aquaculture and all human impacts on the ocean other than fishing and gathering.

Not only did these so-called "Yosemites of the Sea" fail to protect the ocean, but they violate the traditional fishing and gathering rights of the Yurok Tribe and other Indian Nations and are based on terminally flawed and incomplete science. In fact, Ron LeValley, the Co-Chair of the MLPA Initiative Science Advisory Team for the North Coast, is currently in federal prison for conspiracy to embezzle $852,000 from the Yurok Tribe.

People need to understand that the millions Chevron and other oil companies have spent on lobbying, campaign contributions and setting up “Astroturf” groups promoting the oil industry agenda are small change to Big Oil. The five big oil companies – BP, Chevron, Conoco-Phillips, Exxon Mobil and Shell – made a combined total of $93 billion in profits last year. Big Oil’s estimated profits in 2014 were over $96 billion. (http://www.stopfoolingca.org/)
Add Your Comments
Support Independent Media
We are 100% volunteer and depend on your participation to sustain our efforts!