Add an Event
Newswire
Calendar
Features
Home
Donate
From the Open-Publishing Calendar
From the Open-Publishing Newswire
Indybay Feature
Publish to Newswire
Add an Event
Related Categories: Santa Cruz Indymedia | Anti-War | Police State & Prisons
Activists Say Santa Cruz Police Lied to Secure Armored Vehicle Purchase
by Alex Darocy (alex [at] alexdarocy.com)
Wednesday Jan 28th, 2015 8:59 PM
On January 27, community members held a press conference at Santa Cruz City Hall to reveal information which has added to their belief that police essentially lied in December when seeking the city council's approval to purchase a BearCat (Ballistic Engineered Armored Response Counter Attack Truck) they claim will be used county-wide as an "emergency" vehicle. The purchase of the BearCat, which will be paid for with $250,000 in Homeland Security Department grants, has been widely protested in Santa Cruz by those opposed to the militarization of police. The Santa Cruz Police Department has claimed the nearest vehicle that is equipped similarly to the BearCat they want is located in Santa Clara County and would take 3-4 hours to arrive during an emergency, however activists with the organization SCRAM! (Santa Cruz Resistance Against Militarization!) announced they have found that at least two local law enforcement agencies currently possess armored vehicles. The County of Santa Cruz owns two armored vehicles, they say, and the City of Scotts Valley owns one. [Top video: Journalist John Malkin speaks at the January 27 BearCat press conference. Scroll down for photos.]
Copy the code below to embed this movie into a web page:
Download Video (115.9MB) | Embed Video
On December 9, Santa Cruz Police informed the city council that if they had possessed an armored vehicle, they would have deployed it when two members of their department were gunned down while on duty in 2013, but SCRAM! members found a photograph that shows Scotts Valley Police's armored vehicle was on the scene during that incident. When activists contacted Scotts Valley Police recently, they were told the SWAT vehicle arrived to aid the SCPD within 20-30 minutes that day.

Journalist John Malkin, who has been working with SCRAM! and others to uncover more information about the SCPD's BearCat purchase through Public Records Act Requests, said that information detailing other agencies' armored vehicle inventories would have been, "very useful to have shared with the city council at the point when they were asked to vote for purchasing a new 250 thousand dollar vehicle."

"Our idea is that it would have given them a better perception of what kind of equipment is available locally, what kind of sharing is possible, and that the vehicle for another reason is not needed for our city," Malkin said.

SCRAM! activists then answered questions from the public and distributed a photo of the Scotts Valley SWAT vehicle in action that was originally published in the news when the Santa Cruz Sentinel and the LA Times reported on the 2013 officer shootings.

After the press conference concluded, community members entered the city council meeting, which was in progress, to speak to the BearCat issue during the oral communications period. They carried with them protest signs with inscriptions such as, "No Thanks To Tanks," "Give Peace A Chance," and "Give Back The BearCat Armored Military Vehicle."

Activist Sherry Conable spoke and reminded city council members that on December 9 she asked that they postpone the BearCat vote because there was not enough information, and because it would "back people into corners, rather than build bridges with the community," she said.

Conable then eloquently stated how she thought Santa Cruz Police had lied:

"I have participated in the public process for 30 years in Santa Cruz in many different ways and I really have come to believe that one of the things that makes it most broken and unable to serve is dishonesty, and dishonesty occurs both by direct lying, and it occurs by concealing and manipulating information to get an outcome you want, even though if people had other information, they might see it differently. Activists do that. Staff does that. Elected officials do that. I believe that you, and and therefore we the community of Santa Cruz, in effect were lied to by the police department in order to secure the BearCat. I believe that the trust of the community has been severely damaged, and that our belief that we are being governed by community covenants that actually serve the well being of the whole community has been severely tattered. We have done a really good job as activists trying to respond to this situation. We need now for you to exercise your authority to build that trust again and to restore those community covenants."

Activists believe there are many other inconsistencies in the police statements made regarding the acquisition of the armored vehicle, and that they will continue to demand the Santa Cruz City Council rescind the BearCat order. Additionally, a public forum on the militarization of Santa Cruz Police will be held at 6pm on February 11 at the Louden Nelson Community Center. 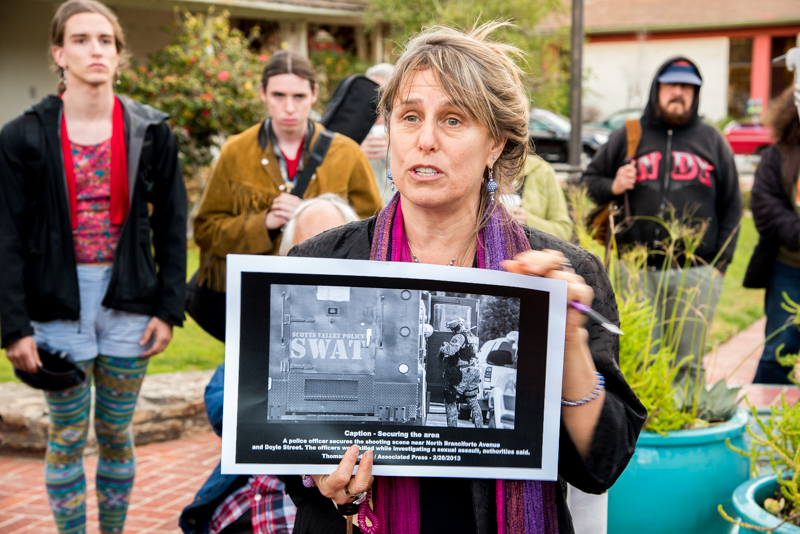 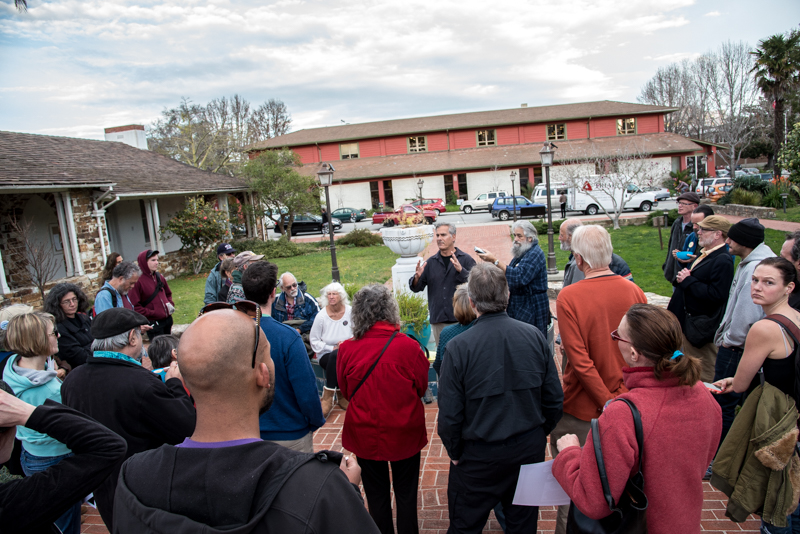 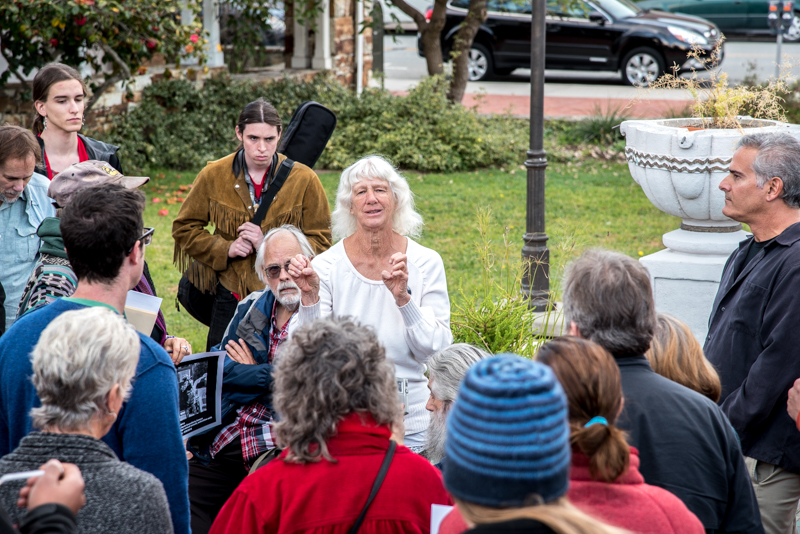 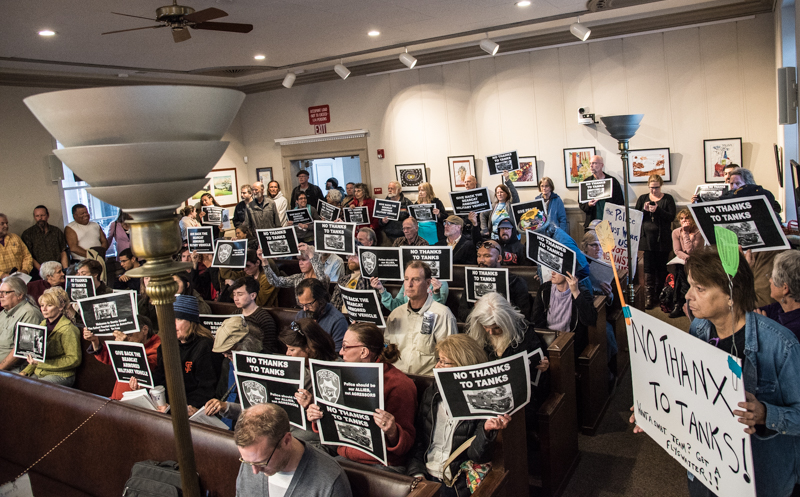 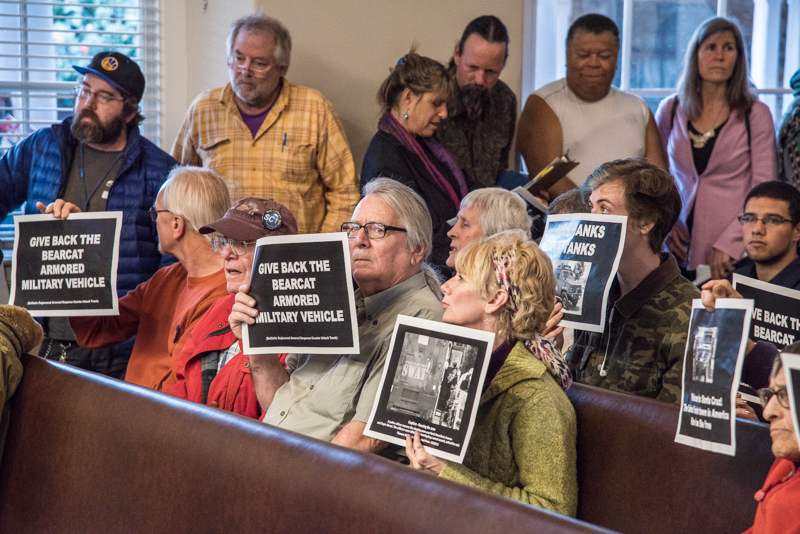 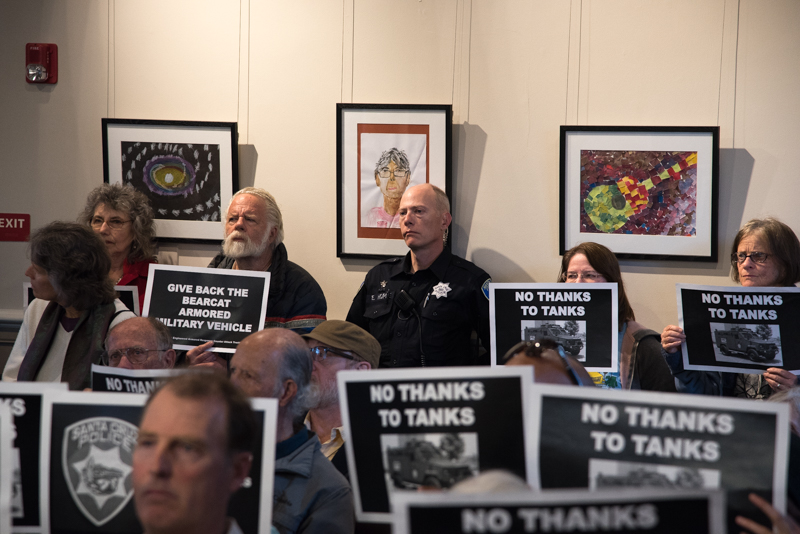 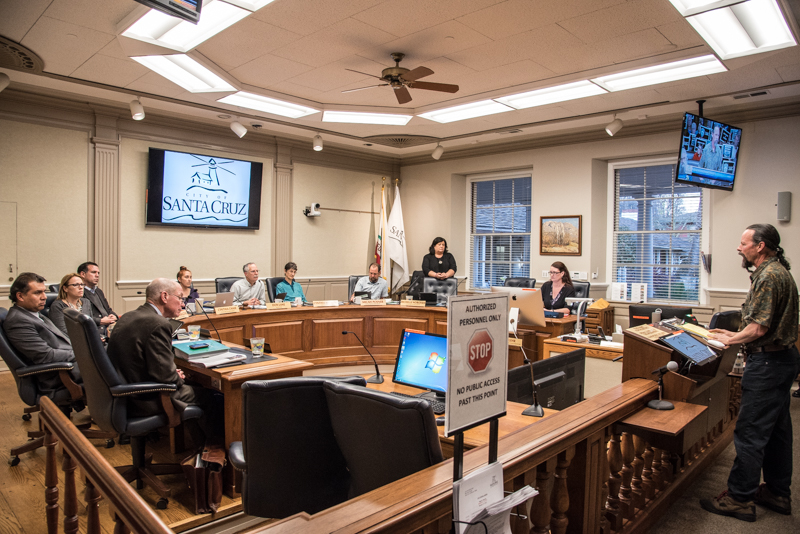 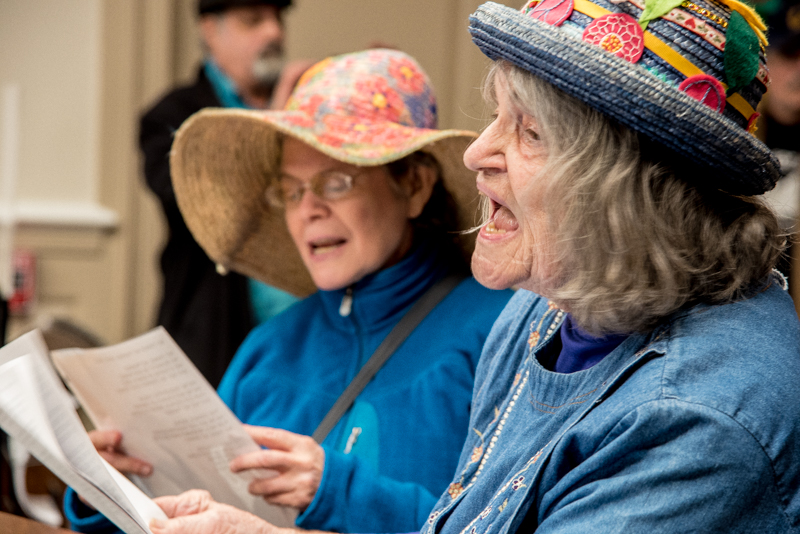 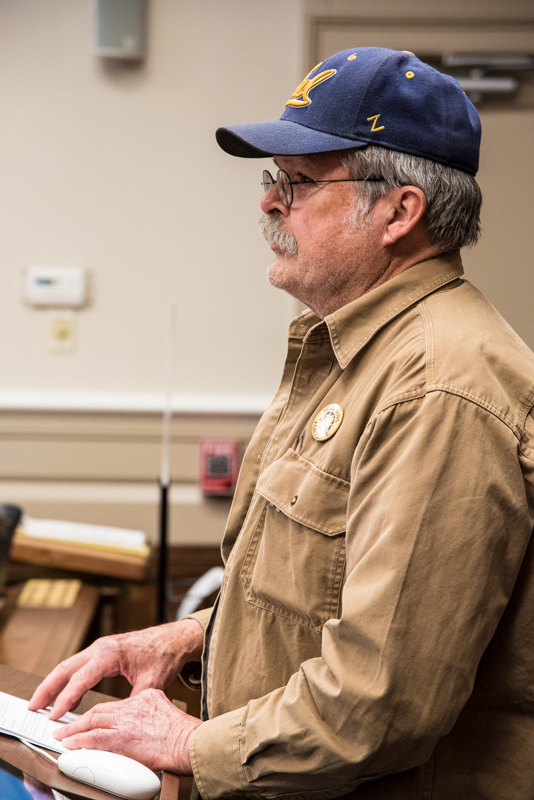 §Santa Cruz Food Not Bombs set up outside of the City Council meeting
by Alex Darocy Wednesday Jan 28th, 2015 8:59 PM 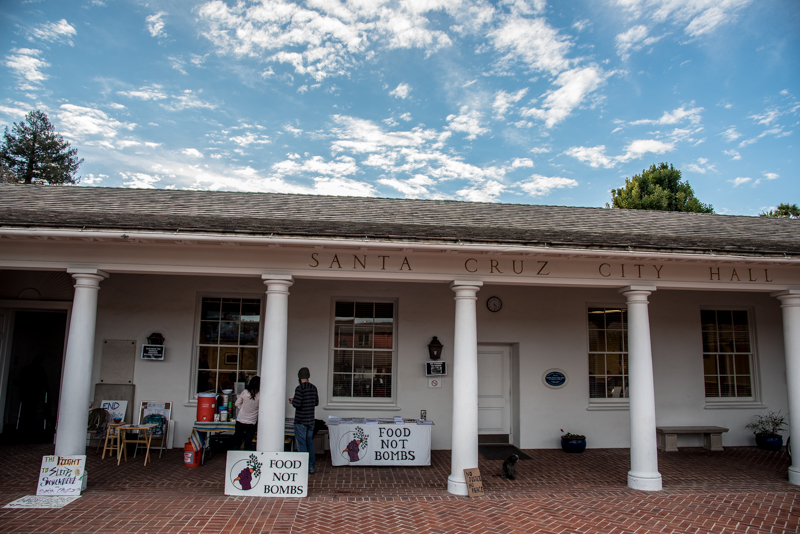 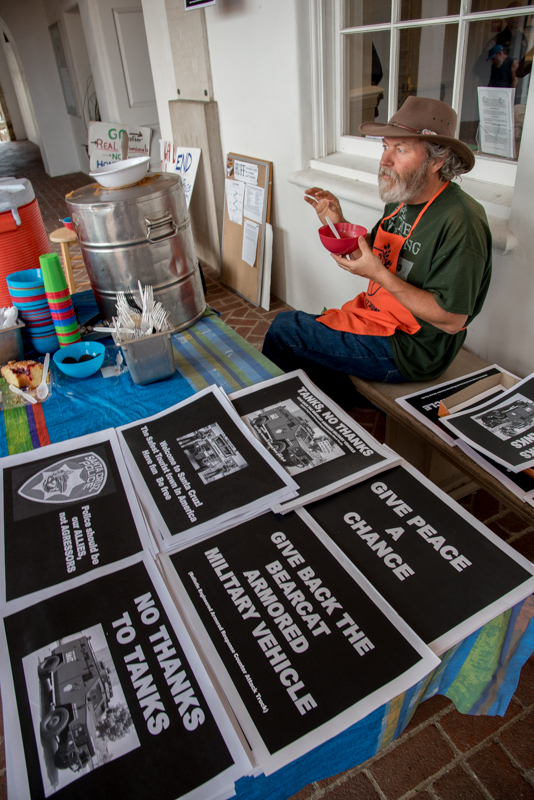 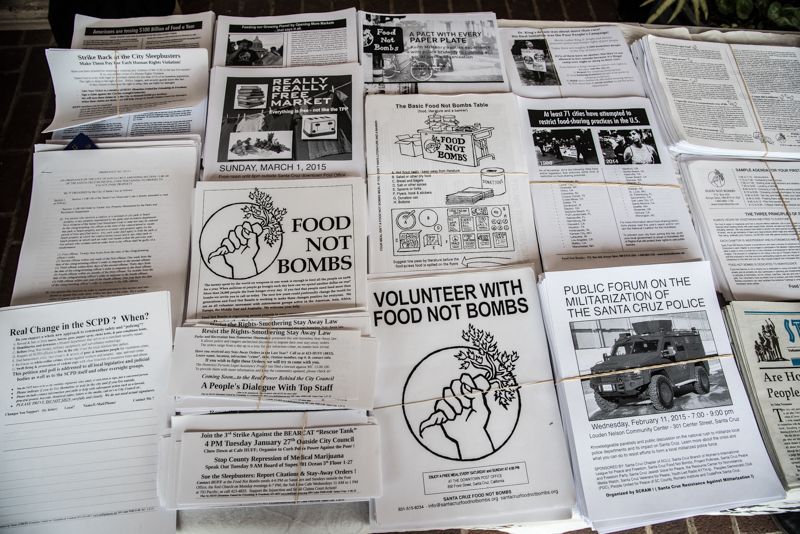