by EASTWEST
Bay area anarchist publication dealing with community and social struggles in our area. This issue touches on the continued rebellion against the police that we began to cover in the last issue. 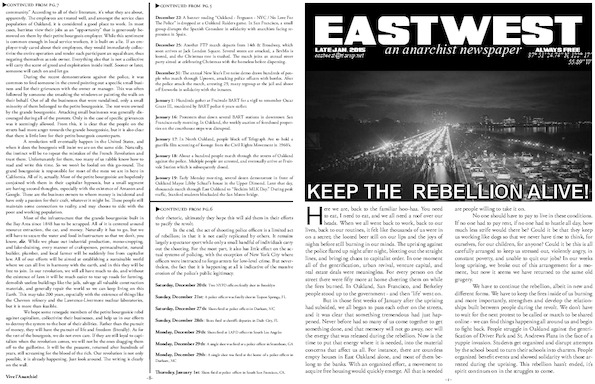 Download PDF (1.2MB)
"We have to continue the rebellion, albeit in new and different forms. We have to keep the fires inside of us burning and more importantly, strengthen and develop the relationships built between people during the revolt. We don’t have to wait for the next protest to be called or march to be shared online - we can find things happening all around us and begin to fight back. People struggle in Oakland against the gentrification of Driver Park and St. Andrews Plaza in the face of a yuppie invasion. Students get organized and disrupt attempts by the school board to turn their schools into charters. People organized benefit events and showed solidarity with those arrested during the uprising. This rebellion hasn't ended, it’s spirit continues on in the struggles to come."
Related Categories: California | East Bay | Global Justice & Anti-Capitalism | Health, Housing & Public Services | Police State & Prisons | Racial Justice
Add Your Comments
Support Independent Media
We are 100% volunteer and depend on your participation to sustain our efforts!