Thanks for inviting me to participate with Compassion Santa Cruz, starting with a day of service today on the Martin Luther King Jr. holiday. While I very much appreciate these efforts, I feel most inspired this MLK holiday to reflect more deeply with you on the meaning of compassion and the spirit that Dr. King embodied.

Like you Don, I also have dedicated countless hours of service to help meet the needs of those who are pushed to the margins of our society. I therefore have the utmost respect for the work you have done to help bring relief to those “least among us” through the creation of the Homeless Service Center and the 180/180 housing program. As someone who has studied extensively the sacred scriptures and philosophies from around the world, I also appreciate the simple fact of your bringing compassion to the forefront of public discussion, where it is so often ignored or even derided.

Yet while I support the public profession of compassion and the performance of service work, for me compassion runs far deeper. And for me the most moving definition of compassion is not in the Dhammapada, the Gospels, Plato nor the Bhagavad-Gita. Rather, the conception of compassion most real and moving for me was delivered by Martin Luther King Jr.:


“On the one hand we are called to play the good Samaritan on life’s roadside; but that will be only an initial act. One day we must come to see that the whole Jericho road must be transformed so that men and women will not be constantly beaten and robbed as they make their journey on life’s highway. True compassion is more than flinging a coin to a beggar; it is not haphazard and superficial. It comes to see that an edifice which produces beggars needs restructuring.”

It therefore seems ironic to me that Compassion Santa Cruz invokes the name of Dr. King to support a day of “good works”, without any mention of this greater restructuring of society that King felt was most important.

I am not writing, however, simply to discuss the politics of this new compassion-centered organization. I feel called above all to challenge you, Don, to bring your actions as a public figure more in line with your profession of compassion. I think you would agree with King and myself that our society is not just. By design our economic system funnels most wealth to the top while leaving many in the margins. Racism still permeates the entire fabric of society, and most especially our criminal justice system. Police are increasingly militarized, even as our actual military continues to wreak havoc on the poor people of the world in the service of corporations and a wasteful consumer economy.

Yet while I think you agree with me on the outline of these problems, as a Council member and Mayor I do not see your compassion reflected in your actions. A few years ago at a point of especially fierce anti-homeless sentiment, you voted to support police raids of camps, without offering people anywhere else to go, while also opposing the creation of designated homeless camps. You also voted then and again more recently to support “stay away” ordinances that address the conflicts between homeless and housed people in parks by simply ramping up punishments against the homeless, including misdemeanor crimes for repeated cases of sleeping or urinating. You approved the acceptance of a military-style vehicle by the SCPD that your fellow Council members openly stated should be able to be used against political demonstrators, while nearly every citizen to comment voiced their opposition. When I exposed the City’s termination of a program that gave hundreds of bikes away to low-income youth with no transparency, you as Mayor wrote a public statement defending the City and making statements you knew were false. While I appreciate that you did issue an apology more than a year later, when it most mattered you seemed more interested in deflecting criticism from your fellow Council members than in pursuing what was true, and what was beneficial to youth in need.

I sincerely believe you are a compassionate person, and are not making these decisions out of lack of concern for others. Rather you appear to think that by keeping in the good graces of your compassion-deficient counterparts, you are able to extract concessions like the urging for social workers to be present when police raid camps or parks to, “connect homeless people with services”. Yet you know as well as anyone that the shelter system can only house about a tenth of the homeless population, and other services like residential drug treatment programs are also woefully inadequate to meet the demand. Therefore, however noble your aims may be, in practice it seems like a failed strategy, which concedes so much at the outset that the gains cannot possibly justify that which is sacrificed to achieve them.

So on this Martin Luther King Jr. holiday, I am writing to urge you to go beyond good works and positive sentiments, and take inspiration from this great figure in our history. King did not concern himself with what was “politically viable” but with what was morally right. Burning with what Cornell West calls “prophetic fire”, King spoke eloquently about the specifics of the struggles he engaged in, but always placed them squarely in the context of the immorality and injustice of the overall system. And rather than excuse one little injustice to secure a concession against worse possibilities, King declared that, “An injustice anywhere is a threat to justice everywhere.” In spite of the harm to his popularity and reputation, King took controversial positions like opposing the Vietnam War and US foreign policy more generally, declaring that, “the greatest purveyor of violence in the world is my own government”. In the end he was not even swayed by the threats on his life, but triumphantly carried on, his vision for racial and economic justice more important than his own safety. May we all take inspiration from his example.

§At last...
by Robert Norse
Tuesday Jan 20th, 2015 11:28 AM
Articulate and educated critics are beginning to name names, assign responsibility, and call for public accountability.

Exposing Lane's hypocrisy (or "failed strategy" if you want to be charitable) is good. It is also important to create the timelines and chronology of human rights betrayals by other Council members. Perhaps more importantly, by the City Council staff which has the real power.

I don't believe it's a matter of compassion, but simple justice in terms of creating a sub-class of homeless human beings. Whatever Lane or I or anyone may actually feel in our dealings with the vulnerable and poor, the issue is justice not our own personal feelings of compassion. 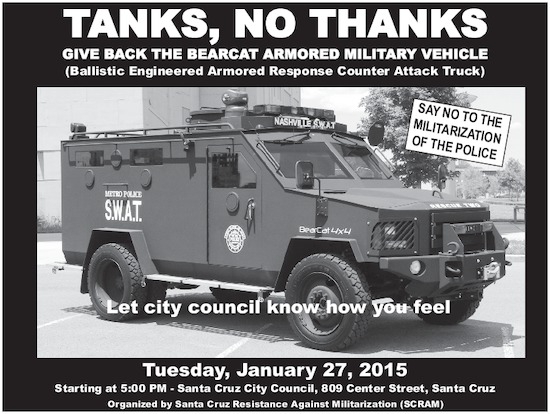 Download PDF (753.1KB)
BEARCAT PROTESTS CONTINUE
The massive response to the City Council and SCPD's collusion to ignore the wishes of those attending City Council and perhaps the community generally has encouraged activists to resume direct action next week. Since the police chief and the mayor to respond to specific questions like (1) why a 7 month delay in informing the Council and public? and (2) what was the actual cut-off date for a Council vote on the acquisition? some activists feel the protests must resume, intensify, and get more focused.

Protests are resuming next Council meeting against police abuse in Santa Cruz. This focuses on the Bearcat, but, many are also concerned about the traditional and recently escalated denial of basic homeless human rights as well as the local SCPD's racial and class profiling, cover-up of force actions, and other abuses.

CAFE COLBY RIDES AGAIN
A tip of the hat to Cafe Colby (aka Cafe HUFF) that hit Pacific Avenue yesterday outside the vacant Sway offices linking the facile Martin Luther King Day holiday with real demands for justice for homeless people. She, Sherry, Raven, & other activists broke up the usual lockstep walk-and-shop trances of the downtown with petitioning, coffee, and brownies. Pat Colby reports it's likely to become a weekly event.

DECONSTRUCTING STAY-AWAY STUPIDITY
High up on Colby's priorities is the Stay-Away law passed at City Council in the evening and as yet undocumented in detail on indybay. Read the law at https://www.indybay.org/uploads/2015/01/09/final_law.pdf and https://www.indybay.org/uploads/2015/01/09/p_and_r_codes_shorter.pdf . The expanded Stay-Away sections of the law go into effect on February 12th or thereabouts (30 days after final passage at the 1-13 Council meeting). The other sections, including a 1-day police-initiated Stay-Away are already in effect.

According to Davis's analysis, in the last year, the majority of infractions and Stay-Aways are for sleeping, "camping", being in a closed area or smoking. The majority of those given the additional punishment of stay-aways are homeless people. These facts were ignored by City Council, which instead voted for Councilmember Terrazas's "gather more stats for next September" direction to the staff.

No estimate was made of the cost of this increased level of criminalization of the homeless.

No analysis was made of the effectiveness or consequences of over 1000 1-day Stay-Away orders already given out since July 2013 by police and rangers. though that date was provided by Davis.

A long-threatened lawsuit by attorney Judi Bari and Homeless Persons Legal Assistance Project loner Steve Pleich is due to hit the courts this week to freeze the Stay-Away law in its tracks.
Add a Comment
§well said steve
by @nother @
Thursday Jan 22nd, 2015 11:44 AM
“The arc of the moral universe is long, but it bends towards justice.”
Add a Comment
§Another Letter to Lane Regarding Decorum as Repression
by Robert Norse
Sunday Jan 25th, 2015 8:14 AM
...for some reason buried in the doghouse section of indybay:
https://www.indybay.org/newsitems/2015/01/23/18767388.php