Add a Comment
§re: "Its not a bearcat"
by So Say More
Monday Jan 12th, 2015 5:56 PM
If it's not a bearcat, then tells us what it is. Can you confirm your statement?
Add a Comment
§Since Satire seems to be in the news
by Razer Ray
Tuesday Jan 13th, 2015 9:18 AM
In honor of #CharlieHebdo, prime candidate for the Darwin Awards.
NOT Satire... Bullying and ridiculing a LARGE portion of France's population.
It can get you killed guys. TSOL.

My email to a listserv in re tonight's meeting:

(PS. anyone who wants to can steal this riff)

> Rayzer..thanks for sending "Not satire"
> Did you not the speech imbedded order from Obama that satire about him is to stop?


Don't know about satirizing Obama, and honestly, I doubt there's any such law or executive order (but you might garner a secret service visit if your satire is a little edgy)

However today at my city council, due to the action of a local gadfly, the city is going to modify council decorum rules to make it a breach to turn your back on them and speak directly to the gallery.

They're also going to have to explain WHY, after seven months of secrecy in planning, they're going to give local police a matching grant to take a glorified, up-armored pickem up truck from from one of DHS's failing partners-in-police-state manufacturers.

I've already suggested to them, that this thing, intended for 'officer protection', is probably vulnerable to the most commonly used weapon against the police in the world today, General Molotov's contribution to urban guerrilla warfare.

Tonight at council, I've got a satire routine already planned

I'm going to suggest that we all draw straws for the job of testing this thing called a "Bearcat" for it's officer protection capabilities by putting it in that BIG HOLE they dug downtown for a 'luxury condo" project that never happened, to contain the potential for damage to surrounding structures, and we get to take turns heaving firebombs at it.

I'll spring for the gasoline, kerosene, and ivory soap flakes (biodegradable unlike styrofoam), and if the city sees fit to buy a pig to throw inside the vehicle with an apple in it's mouth (I've considered mentioning the SCPD's police chief for the role because he's already been bought), we'll get to listen for the gentle sizzling of roasting pork, and then we'll have a luau.

The city can return the charred hulk of the... thing... to the manufacturer LENCO, as unsuitable for it's stated purpose.


In further police state related council moves, they're also going to vote on allowing city functionaries to bypass the court system's restraining order protocol and issue YEAR LONG 'stay away orders' to homeless people in city parks after three 'offenses'. such as covering up in a sleeping bag... or smoking, or any of the dozens of sundry parks & rec 'ordinances' the city allows.

The "appeal procedure" if you disagree, is handled by the city manager, and according to the exact wording of the law, does not ascribe to court-standard 'rules of evidence'.

Meanwhile, the local court seems ok with relegating their authority.

There's gonna be a BUNCH of people there about those three issues, and it's going to be fun. The council has already had to have the chambers cleared with police assistance two times in the last few months, and had to flee to their meeting room once... because everyone turned their backs on them.


>
> On Mon, Jan 12, 2015 at 6:24 PM, Rayzer wrote:
>
> Charlie Hebdo.
>
> Not satire. Bullying and ridiculing a large segment of French society intentionally, but NOT so much a bully pulpit for issues that matter.
>
> Dimitry Orlov, Club Orlov:
>
> I was not a reader of Charlie Hebdo, and so I don’t know whether they properly satirized the American invasion of Iraq, the seeding of Basra, Fallujah and other parts of Iraq with depleted uranium munitions causing a large number of cancers and birth defects, the wholesale slaughter of Iraqi civilians, or the use of torture at Abu Ghraib and other US-run detention centers.
>
> Or whether they shined a comic light on the utter futility of the NATO war in Afghanistan, whose only result seems to be a speedy return to status quo ante as soon as the troops pull out.
>
> I think there are gems of comedy there: the Americans are still sending in advisers—as if they ever knew what to do there themselves! I hope they did satirize these events; if they didn’t, but on the other hand saw it fit to poke fun at Islam, then that would seems a tiny bit lopsided to me, but I hope to stand corrected.
>
> Nor do I know if Charlie Hebdo properly savaged the Israelis for their various practices, such as shelling UN-run schools because there might be “terrorists” lurking among the women and children, or for the Israeli military propaganda along the lines of “shoot pregnant Palestinian women and kill two for the price of one.”
>
> Is there humor in such things? I don’t know. Nor is there humor in the Qur‘an, or in any of the acts ascribed to prophet Mohammed.
>
> And yet the satirical geniuses at Charlie Hebdo found some there…
>
> In Full, DImitry Orlov, Club Orlov, On the Charlie Hebdo Carnage
> http://cluborlov.blogspot.com/2015/01/on-charlie-hebdo-carnage.html
>
>

Add a Comment
§The model has been reported numerous times
by Not a bearcat
Tuesday Jan 13th, 2015 3:19 PM
You can do your own googling; I'm not interested in being a secretary.

And the vehicle is very similar, I don't discount that fact. But, I do think that if everyone is going to get up in arms and start protesting that they ought to at least know what they are protesting against...and it's not a bearcat.
Add a Comment
§Baring the truth (sic) to a troll
by Razer Ray
Wednesday Jan 14th, 2015 10:01 AM 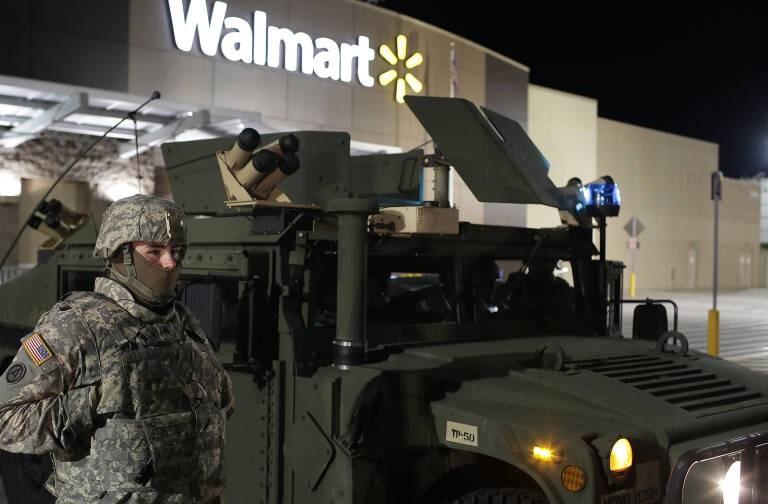 Dude! You're NOT saying anything that isn't just plain timewasting.

As a matter of fact I think you're a child posting comments just to see if your comments appear.

FWIW I THOROUGHLY perused the LENCO site WEEKS AGO. It's the civilian model, but it's name IS still "BEARCAT".

It's NOT even an APC (armored personnel carrier, military grade)

Even the "military model" isn't a combat vehicle like an MRAP or APC, it's purchased by the DOE and the DOD for SITE & INFRASTRUCTURE PROTECTION. "Reaction teams"... the federal and military equivalent of a SWAT team.

The ugly truth is this glorified, 'up-armored' pick up truck isn't even good officer protection in a society where, unlike Afghanistan or Yemen where there's an AK hanging on every home's mantel, the most common weapon used against Law enforcement is the firebomb... as seen above. But it's a GREAT intimidation tool parked at the curb when serving Drug-related felony warrants.

By statistical analysis of California's prison population that means it would tend to be used against the victims of that "War on Drugs" disproportionately... African Americans. Go figure.

Add a Comment
§So OTHER Califa PDs are giving their Bearcats back... RIght!
by Razer Ray
Wednesday Jan 14th, 2015 11:54 AM
The BPD/OPD/SJP:D have OTHER plans for civilian disturbance control.

Bloomberg reports that Berkeley and Oakland, both part of Alameda County, are seeking to use unmanned aerial vehicles. The city of San Jose is also eager to do the same...