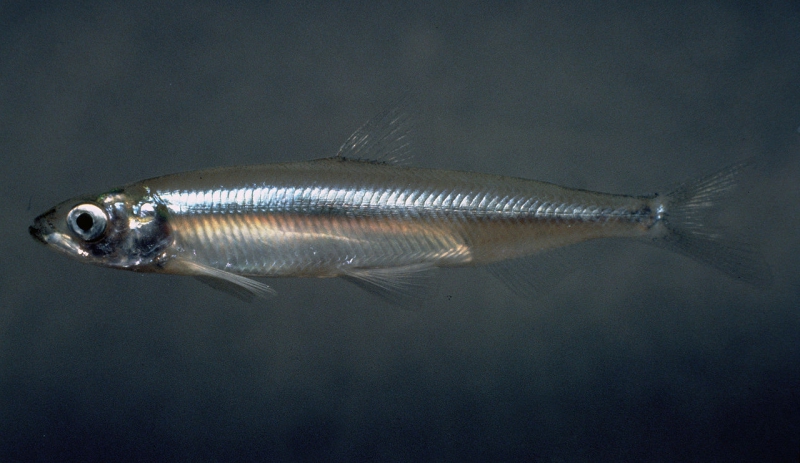 The Delta smelt, an indicator species that demonstrates the health of the Sacramento-San Joaquin River Delta, reached a new record low population level in 2014, according to the California Department of Fish and Wildlife's fall midwater trawl survey that was released today.

The smelt was once the most abundant fish in the Bay-Delta Estuary. It is considered an indicator species because the 2.0 to 2.8 inch long fish is endemic to the estuary and spends all of its life in the Delta.

The California Department of Fish and Wildlife (CDFW) has conducted the Fall Midwater Trawl Survey (FMWT) to index the fall abundance of pelagic (open water) fish, including Delta smelt, striped bass, longfin smelt, threadfin shad and American shad, nearly annually since 1967. The index of each species is a number that indicates a relative population abundance.

Scientists and leaders of fishing groups, Indian Tribes and environmental organizations pinpoint the export of massive amounts of water to corporate agribusiness interests on the west side of the San Joaquin Valley, Southern California water agencies, and oil companies conducting steam injection and fracking operations in Kern County as the key factor behind the fishery collapse.

"The 2014 Delta Smelt index is 9, making it the lowest index in FMWT history," wrote Steven Slater, CDFW environmental scientist, in a memo revealing the results of the survey. "Delta Smelt abundance was highest in 1970 and has been consistently low since 2003, except in 2011."

Found only in the upper Sacramento-San Joaquin River Delta, the fish mainly inhabits the freshwater-saltwater mixing zone of the estuary, except during its spawning season when it migrates upstream to freshwater following winter "first flush" flow events from approximately March to May.

Because of its one-year life cycle and relatively low fecundity, the Delta smelt is very susceptible to changes in the environmental conditions of its native habitat.

The survey also revealed the continuing collapse of striped bass, longfin smelt, threadfin shad and American shad in the Delta, the largest estuary on the West Coast of the Americas.

The index for longfin smelt, a cousin of the Delta smelt, is 16, making it the second lowest index in history. Longfin smelt abundance was also highest in 1967.

The 2014 threadfin shad index is 282, the sixth lowest in history and the seventh in a series of very low abundance indices. Threadfin shad abundance was highest in 1997, a year of high outflows into San Pablo and San Francisco bays.

Delta advocates pointed to mismanagement of Central Valley reservoirs and the Bay Delta Estuary by the state and federal governments as the primary reason for the decline.

"These crashes in fish populations show that the Delta was not managed for fish protection in 2014," responded Barbara Barrigan-Parrilla, Executive Director of Restore the Delta. "We know from research that outflows to San Francisco Bay were needed to stop salinity intrusion at the state and federal export pumping facilities."

"Thirty years of overpumping have led to the destruction of our fish species during the current severe drought. The question is whether proposed federal drought relief legislation proposed in Congress is going to even worsen the bad management practices and destroy Bay Delta fisheries in 2014," Barrigan-Parrilla stated.

The surveys were initiated in 1967, the same year the State Water Project began exporting water from the Delta. The surveys show that population indices of Delta smelt, striped bass, longfin smelt, threadfin shad and American shad have declined 95.6%, 99.6%, 99.8%, 97.8%, 90.9%, respectively, between 1967 and 2013, according to Bill Jennings, Executive Director of the California Sportfishing Protection Alliance (CSPA) and Board Member of the California Water Impact Network (C-WIN).

Both the 2013 and 2014 indices for Sacramento splittail, another native fish found only in the estuary, were not released, but results from 2012 reveal that splittail indices have dropped 98.5% from 1967 levels. In 2011, the Brown administration presided over a record "salvage" of 9 million splittail in 2011, a record year for exports by the federal and state projects.

The release of the survey takes place as Governor Jerry Brown continues to back the controversial Bay Delta Conservation Plan (BDCP) to build the twin tunnels under the Delta. The plan is based on the premise that taking more water from the Sacramento River above the Delta will "restore" the collapsing estuary.

The $67 billion plan will hasten the extinction of Central Valley salmon, Delta smelt, longfin smelt, green sturgeon and other fish species, as well as imperil the salmon and steelhead populations on the Trinity and Klamath rivers.

You can read the full report with graphs at: https://nrm.dfg.ca.gov/FileHandler.ashx?DocumentId=92840
Add Your Comments
Support Independent Media
We are 100% volunteer and depend on your participation to sustain our efforts!