by Christopher Ketcham
(Summary by Stephany Seay) Many believed that a Salmon, Idaho-based wolf & coyote killing spree was canceled when organizations released to the media that the BLM had revoked permits for the event. The Forest Service still allowed it. The derby was still on. Eight individuals, rallied by Brian Ertz of Wildlands Defense, braved the hostile Salmon community to be on the ground and document the carnage. We were able to expose it, let them know people are watching, and we shamed them into hiding their carnival parade of cruelty. 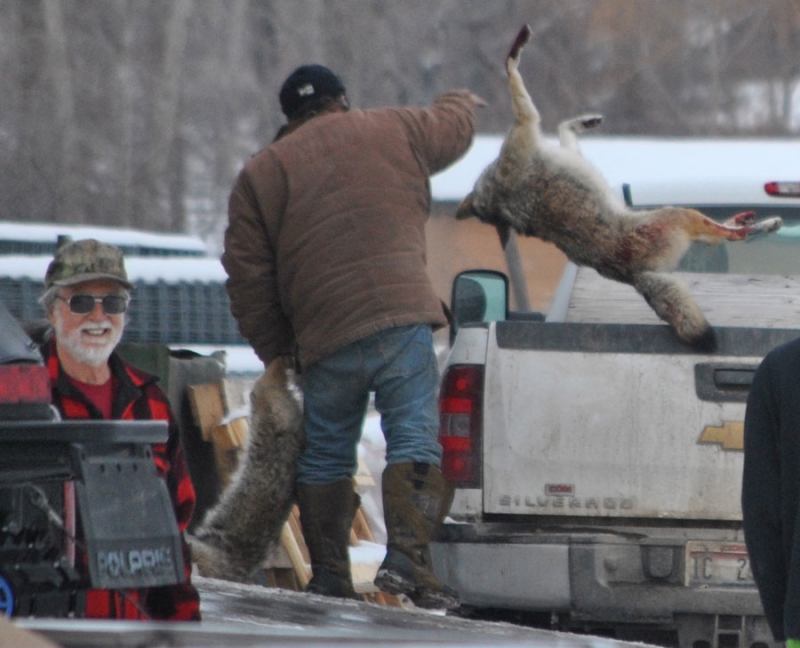 On the third day of the wolf-killing contest, an earthquake shook the mountains near Salmon, Idaho. "It's Mother Earth revolting against the cruelty, the violence, the madness, of what's happening here," said Brian Ertz, president of the nonprofit advocacy group Wildlands Defense. A year ago this week, Ertz and I went undercover for VICE in Salmon to infiltrate that town's annual Coyote and Wolf Derby, an event as primitive as it sounds: Dozens of contestants compete to mow down as many coyotes and wolves as quickly as possible, piling up the cadavers in their trucks, vying for $1,000 prizes for most animals killed. Kids as young as ten are invited to join in the slaughter with their families, with special awards handed out to the children who shed the most blood.

This is not hunting for meat. It is not hunting to prevent threats to human safety. It is killing for the sake of killing. To join in the derby was an unnerving experience for me, an immersion into the ugly side of rural mountain folkways in the American West.

I had thought, quixotically, that exposure of Salmon's atavistic blood rites in an international magazine would have helped put an end to it. After all, much of the derby hunt occurs on federal public land, which is subject to federal law and oversight by agents of the Forest Service and the Bureau of Land Management. A year later, however, the derby was on again, and with great fanfare. Government regulators had done nothing to stop it, and environmental groups had failed to galvanize public opinion against it. The event's organizer, the ironically named Idaho for Wildlife, had announced, proudly, that the derby would be expanded to four days from the previous year's two. By the end of day one, derby-goers brought in 17 coyotes to a warehouse in Salmon where their bodies were measured, weighed, and skinned, the pelts sold to fur buyers on hand for the nightly bringing-in of the dead.

Not a single representative from the environmental groups that had publicly criticized the derby—and litigated unsuccessfully to shut it down—showed up to confront the bands of hunters. The sole exception was the ad hoc crew of eight hungry young activists that Ertz, 32, had organized, among them a staff member of the ACLU of Idaho, Ritchie Eppink, who joined in the mission as a legal observer, and Stephany Seay, media director of the Buffalo Field Campaign in Montana.

There was good reason to shy away from confrontation: The folks in Salmon hate environmentalists. It's a small town, and the people, thin-lipped and narrow-eyed, easily sniff out strangers. On the first day of the derby, Thursday, Ertz stood at a gas station in Salmon when a local ranch hand approached to offer a warning. "All these people know you're here," said the man, according to Ertz, "and they're gonna be looking for you. I'd keep your head down, and, if I were you, I'd get out altogether because what they're gonna do to you ain't good." By Friday, one of the activists had fled a hotel in Salmon after Idaho for Wildlife organizers called the owner and warned about environmentalists holing up there.

I asked Ertz why he was taking the risk when he could've tried again to go undercover. Last year, disguised as hunters in camouflage, rifles on our backs, blood thirst in our mouths, we had been welcomed in Salmon. This year, he and his colleagues broke up into teams of two; armed with video cameras, they trawled the hills in their cars to document the slaughter for a future lawsuit.

"The objective," said Ertz, "is to be very much in their face, to let them know we're out here on patrol, looking for violations of federal law. We want to project the image that we could be anywhere, everywhere."

A related objective was to stand in open defiance of what Ertz described as "a culture of death." Salmon, like many small towns in the rural West, is a ranching society. Ranchers who run their cattle on the open range have historically regarded wild predators not as majestic creatures but as vermin to be exterminated. Investigative journalist Jack Olsen, writing in his 1971 book Slaughter the Animals, Poison the Earth , concluded that the livestock industry's hatred of predators—wolves and coyotes foremost, but also cougars, black bears, grizzlies, wolverines, lynx, bobcats, hawks, eagles, and on and on—went "so far beyond the dimensions of reality as to be almost pathological in origin." Indeed, the desire to annihilate the enemy is not based on a rational assessment of the threat to cows and sheep. The number of rangeland livestock lost each year to carnivore depredations is insignificant—less than a half of a percent, according to the Department of Agriculture.

"These people honestly believe that sterilizing the landscape of predators will enrich their economy and preserve their culture," says Ertz. "Events like the derby validate those who have been conditioned to believe that their way of life, or more accurately their way of death, is under assault by environmentalists. They've got a point. Americans in general are becoming more compassionate toward nonhuman animals, and our appreciation of ecology and the contributions of wildlife communities is growing. This awareness and compassion threatens any culture that predicates itself on wanton destruction and an appalling disregard for the suffering of sentient beings."

By the final day, Sunday, the hunters had killed 30 coyotes, according to the event's Facebook page. (No wolves were taken, either by trap or gunfire.) At the awards ceremony that afternoon, Ertz's crew in separate parties attempted to enter the warehouse where the cadavers had been hung on meat hooks. One of the teams, which included Eppink of the ACLU, carried a hidden camera. They were stopped by an imperious little man in a big cowboy hat. "Are you guys entered in the contest?" he asked.

"No, we just came to see the ceremony," said Eppink.

"Out!" said the cowboy. "There's all kinds of animal terrorists here taking pictures and harassing us!"

When Natalie Ertz, Brian's sister, approached to capture the spectacle of the awards with her Nikon, one of the members of Idaho for Wildlife, a woman with funny blackened teeth named Billiejo Beck, cut off her passage. "No cameras—this is private property," she said.

"What are you hiding?" asked Natalie.

Beck pointed beyond the fencing of the parking lot, and yelled for assistance to a county sheriff who was standing nearby. So Natalie and her brother and the rest of the crew stood at the fence line. Natalie howled three times like a wolf and smiled.

When Beck again emerged, Natalie called to her: "Billiejo! I'd love to talk to you. What does wildlife mean to Idaho for Wildlife? What does wilderness mean? Wolves and coyotes are wildlife! Where's your ethical line in killing?"

There was no response. "Why won't you talk to me if you're so proud of what you're doing?"

The protesters had a partial view into the warehouse—they could spy the coyotes tossed from trucks and hung on the hooks—but Beck at last placed a bloody tarp across the doorway to obscure the line of sight.

"It's no different from last year," said Brian Ertz, "except in one way: This year they were forced to hide their carnival. This year they feared the cameras and scurried like cockroaches to avoid the light."

This year, in other words, there was shame. That's progress. 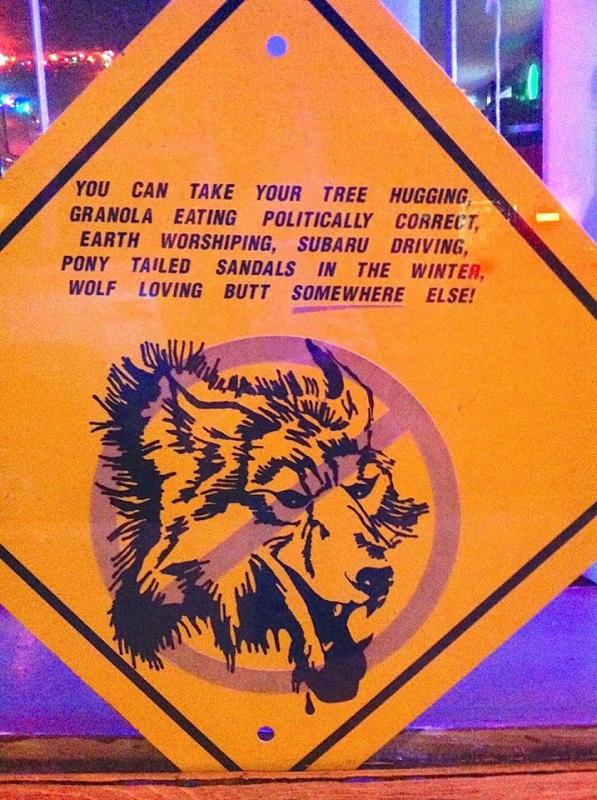 original image (717x960)
END_OF_DOCUMENT_TOKEN_TO_BE_REPLACED
Add Your Comments
Latest Comments
Listed below are the latest comments about this post.
These comments are submitted anonymously by website visitors.
TITLE
AUTHOR
DATE
killing to kill
Danika
Satire at its best.
Don't worry about it
It's not about animal death porn
mr me
What can be done?
phillip Risen
I'm a sheep herder
mr me
Mister
John Warren
Salmon is pretty cold-blooded toward people too
mr me
This is disturbing
Theresa
Idaho against wildlife
J Reynolds
Disgrace of the predator hunter
Pete Braun
Support Independent Media
We are 100% volunteer and depend on your participation to sustain our efforts!