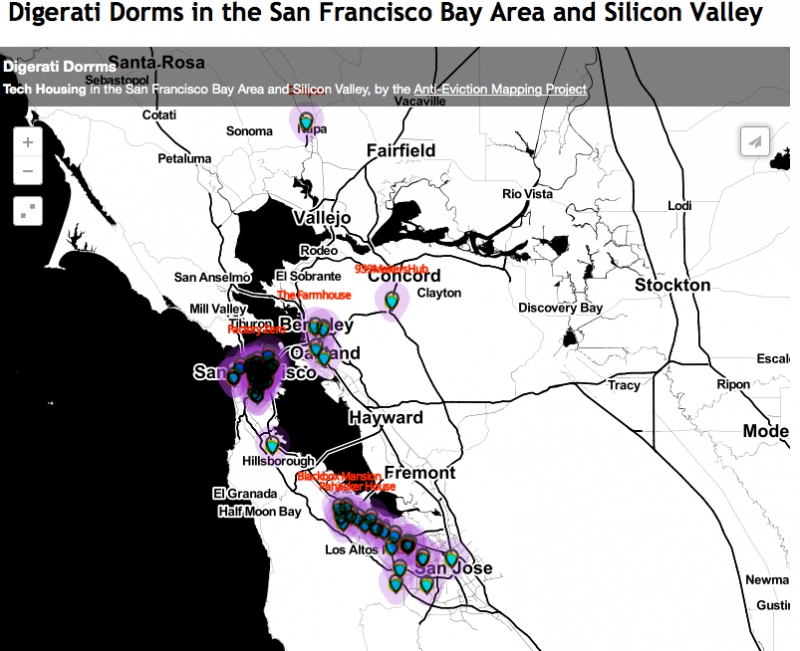 original image (803x654)
Social and communal housing has been alive and well for decades in the San Francisco Bay Area. From communes of the 1960s to artist and activist collectives of the present, cohabitating is one way to maintain socially and politically radical communities. Often collective living results in decreased rents, so that collective members can spend less time working 9 to 5s, and more time engaged in projects, organizing, and enjoying life.

We have witnessed a steep increase in tech-based cohabitating in recent years, very much resultant from the Silicon Valley Tech Boom. From hacker homes to digerati dorms, there are abundant spaces for tech workers to cohabitate with other tech workers. While we very much support collective living and live/work spaces, there are some tech communes that seem to be fulfilling less of a politically radical mission, and more of a capitalistic infrastructure. Instead of embracing the communal spirit of the 1960s, it seems that these digerati dorms are run by owners and middleman companies that are often charging above market rates while pretending the hacker home is part of a collectivist ethos. In the cases of Negev and 20Mission, there are former Single Room Occupancy (SRO) hotels in San Francisco that are now tech dorms. As income inequality continues to skyrocket in San Francisco leading to rampant dispossession of those already poor and working class, we cannot afford to see SROs converted to living spaces for the elite.

There are also Airbnb users such as Vic with 12 listings on Airbnb for different "Hacker Homes" that he makes money renting out in San Francisco and Silicon Valley. There are places like Blackbox Mansion, the "playboy mansion for geeks" where startups are incubated, and the Rainbow Mansion, which houses employees from Google, NASA, and more. There are four locations run by ChezJJ, including one in the Outer Mission that makes $11,628 for 12 bunkbeds per month. Many tech workers in these spaces probably don't know that have renter protections after 30 days, and that the master tenant cannot charge them more than a proportional share of the TOTAL rent, and that the master tenant must provide them, in writing, a statement of the true rent for the apartment according to the Rent Ordinance, 6.15C(3). In fact ChezJJ recently got in trouble in Mountain View for failing to pay hotel tax. Only young people working in (or trying to break into) the tech industry are invited to apply and live in the "dorms"; others need not apply - an apparently violation of California's Fair Employment and Housing Act.
http://www.antievictionmappingproject.net/...
§Digerati Dorms
by Anti-Eviction Mapping Project Tuesday Dec 23rd, 2014 9:25 AM 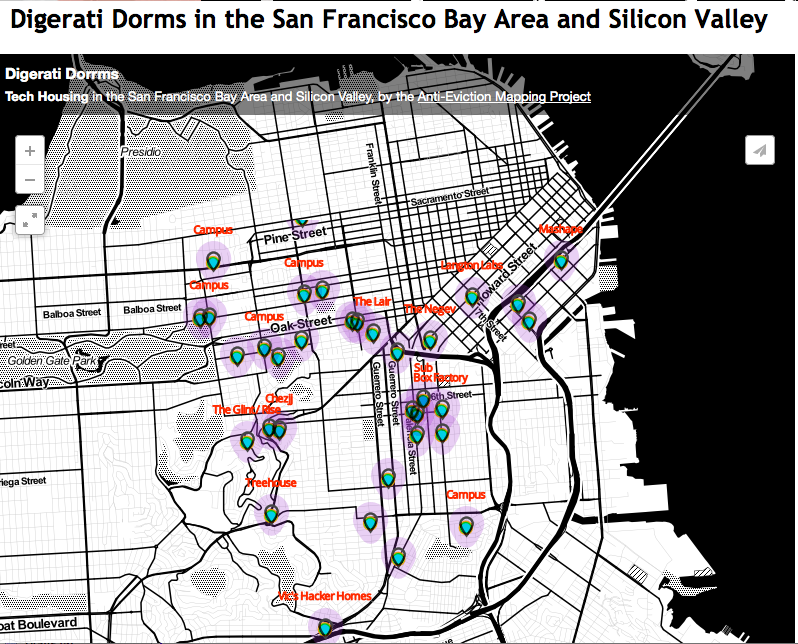 Close up of San Francisco's digerati dorms and hacker homes
http://www.antievictionmappingproject.net/...
Add Your Comments
LATEST COMMENTS ABOUT THIS ARTICLE
Listed below are the latest comments about this post.
These comments are submitted anonymously by website visitors.