Newswire
Calendar
Features
Home
Donate
From the Open-Publishing Calendar
From the Open-Publishing Newswire
Indybay Feature
Publish to Newswire
Add an Event
Related Categories: U.S. | Anti-War
Jeb Bush, Cocreator Of 2 Wars, Executioner of 21, Destroyer of Florida Environment
by Veritas
Wednesday Dec 17th, 2014 12:07 PM
Jeb Bush is the coauthor of 2 of 3 Bush wars, one of the few executing governors in the US, a destroyer of the environment, privatizer of state jobs, prohibitor of the use of state funds for stem cell research, a harmer of public schools through support of vouchers etc. 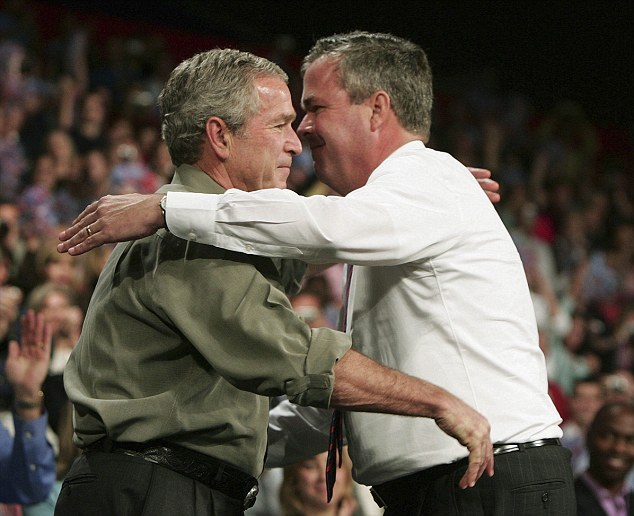 In December, Jeb Bush announced he is exploring the possibility of running for the US presidency. His father and his brother have started THREE wars: the first Gulf war, the socalled Desert Storm, and the war in Afghanistan, now the longest war in US history. These 3 wars have killed millions, injured millions more, destroyed fragile environments, and have virtually bankrupted the US, penalizing the poor as TRILLIONS of dollars was spent on arms, geometrically multiplying veterans' injuries etc. These wars have meant declining health care, library shut downs, students financially shut out of higher education, banks running amok etc.

Jeb Bush was a coconspirator in the theft of the 2000 election from the citizens of the US.
He was supervisor of the removal of untold thousands illegally from the voting rolls, under the guise that they were felons. He was the man who directed that policemen be in
black and Hispanic neighborhoods shutting off roads leading to the polls. Jeb Bush was in charge of the decision of the Jacksonville metropolitan paper's decision to spread disinformation about the ballot in black neighborhoods. A special edition of the Florida Times-Union was published and distributed in black neighborhoods, with false instructions. Many thousand ballots in Jacksonville were disqualified. Because of his colossal crime, the war in Iraq by G H W Bush was again instituted and euphemistically
called Desert Storm. Because of his felonious action, the war in Afghanistan was begun by his brother. He is therefore a cocreator of TWO wars in Afghanistan and Iraq.


Like his brother George, Jeb Bush was governor of 1 of the last 7 states involved in execution. Because Jeb Bush did not prevent the execution of a man named Diaz, the man had several inches of chemical burns on his right and left arms. Altogether, he turned thumbs down to 21 requests for mercy, and executed 21 people, more than several other Florida governors. Florida and Texas
remain 2 of the last 7 states involved in state judicial and prosecutorial murder, while 43 states have come into the 21st Century. Since government murder was reintroduced by the Republican dominated Supreme Court in 1976, Jeb Bush as of December 2014 holds the record in Florida executions.


When he was asked what he would do for African Americans if elected, he replied 'probably nothing'.

Jeb Bush was a proponent of offshore drilling.
Florida depends heavily on its tourist industry.

He served on the board of a Norwegian company which sold fire equipment for oil operations.


Unlike his father who said 'no new taxes' and then raised them, J Bush said he will not rule out increasing taxes. http://www.politico.com/story/2014/12/jeb-bushs-policy-minefields-113624.html


He privatized many state jobs.


He expanded the power of the executive over the judiciary.


He tried to implement school vouchers which weaken public education.


G H W Bush, for a year the director of the CIA, engineered the Iran Contra scandal, meeting on March 12 of 1980 with James Woolsey, another former director of the CIA, to negotiate arms for Iran in exchange for not releasing the US hostages held by the government of Iran until AFTER the 1980 election. The motive was the portrayal of President Carter as weak. The negotiation by private citizens (both Bush and Woolsey were) with a foreign government is a crime. G H W Bush ran the racist Willie Horton ads in his 1988 campaign for the presidency.


James Hatfield wrote the book Fortunate Son about the cocaine arrest and AWOL military record of George W Bush. The Bush family fought the publication and was able to block the first publication. After the book was in the second attempt published, James Hatfield was found dead in an out of state motel room. As in the case of Gary Webb who revealed the CIA's role in distributing crack cocaine throughout black neighborhoods in the US, the murder was called a suicide.


He prevented public fund use for stem cell research.


Such stem cell research would have reduced the amount of pain inflicted on Florida animals in labs.

Two operatives of George Bush attempting to position themselves for the 2016 election both lost their elections. Eric Levinson sent by Bush to Iraq to arrange the illegal immoral hanging of a foreign leader, Saddam Hussein, lost to incumbent Robin Hudson in a North Carolina Supreme Court race.

Whenever anyone prays for all beings, he or she is praying as well for those who have done the most harm.