"...Is it legal? And more broadly, is this a new use of the people’s national forest that will set precedent across the country, introducing an increasing, intrusive militarism into our unique and often fragile national parks and national forests where the public seeks peace? ..." 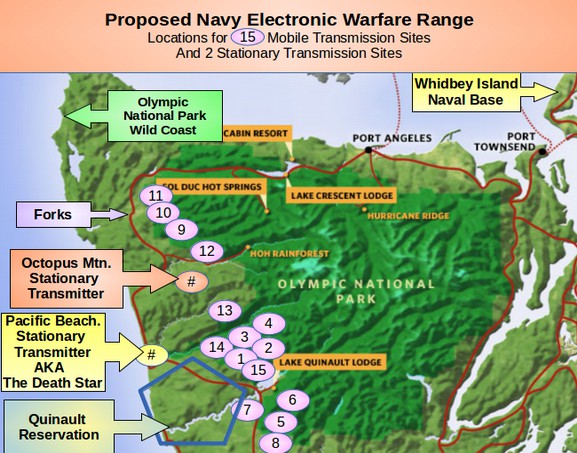 "Navy Warfare Training: Coming to a forest near you" by Robbie Roberts
Posted to the "Port O Call" on November 23, 2014 by Dale Wilson

NOTE: This story includes: links within the text to take you directly to pertinent documents and two side bar stories with additional information.

The time allotted for public comment on the Navy’s proposed electromagnetic radiation warfare exercises in the Olympic National Forest is set to close after November 28th 2014.

The time zone used on the USFS site appears to be Greenwich Mean Time, which is 8-hours ahead of Pacific Standard Time—keep that in mind if you are waiting until the last minute to comment.

In order to have standing to object to the USFS decision on granting the special-use permit, one MUST comment in the current period.

To make your voice heard, file comments online at:
https://cara.ecosystem-management.org/Public//CommentInput?Project=42759
[GO HERE FIRST to find instructions on making a comment that counts:
https://www.indybay.org/newsitems/2014/11/21/18764426.php ]

Navy Warfare Training: Coming to a National Forest Near You?
by Robbie Roberts

It is a dense, ancient landscape of crystal-clear waterfalls and pristine rivers; of trees alive when John Adams was elected the second President of these United Stated. Standing well over 100-feet tall, their broad, moss-covered branches shelter a stunning array of creatures: some endangered species, some endemic and found only in the forests of the Olympic Mountains.

Over 300 species of bird are to be found here and an estimated billion birds fly their migratory routes annually along the coastline. Where the forest ends and the great Pacific begins, once locally extinct sea otters frolic in a forest of kelp, and only slightly farther offshore, the once nearly extinct gray whale may be glimpsed from March to May. In 2013, over 3 million visitors from around the world came to the Olympic National Park and National Forest to experience the unique environment of the only temperate rain forest in the continental United States, and the peace, solitude and sanctity it offers.

Today, the United States Forest Service is poised to grant the Navy their request for a special-use permit for war exercises in and above the Olympic National Forest of Washington state in their squadrons of EA-18G ‘Growler’ supersonic warplanes for approximately 260-days-per-year, 16-hours-per-day, flying as low as 1,200-feet above the ground, and working in conjunction with three RV-sized mobile electromagnetic radiation emitters on the forest floor.

While the legal process of application, public notification and deliberation required by the National Environmental Policy Act (NEPA) has been flawed by inadequate, inept and often contradictory communication from the USFS and the Navy–when news of the proposal finally trickled out, the public responded in overwhelming opposition.

Both principals seemed surprised, but unwavering. In Forks, Washington, USFS Ranger Dean Millett, who will make final decision, said, “The project seemed relatively benign and safe to me. I didn’t think anyone would care.” The Navy grasped at an old cliche and said, “They’re making a mountain out of a molehill.”

Is it a benign, fully disclosed project, as Millett believes? Or is the Navy’s Environmental Assessment (http://a123.g.akamai.net/7/123/11558/abc123/forestservic.download.akamai.com/11558/www/nepa/97011_FSPLT3_2346870.pdf) lacking in scope and simply wrong in its conclusions, as the opposition believes? Is it legal? And more broadly, is this a new use of the people’s national forest that will set precedent across the country, introducing an increasing, intrusive militarism into our unique and often fragile national parks and national forests where the public seeks peace?

We’ll examine the facts, offer links to important documents and hear from both sides. Then, you decide.

The History as We Know It ...
[please go to
http://portocallpublishing.com/2014/11/23/navy-warfare-training-coming-to-a-forest-near-you-by-robbie-roberts/ and read the rest of this excellent article

The Trillion Dollar Death Machine... And How to Stop It!

The purpose of this study is to summarize the Navy's trillion dollar plan to turn the Olympic Peninsula into an Electronic Warfare Zone and to provide scientific evidence that two endangered species, Spotted Owls and Marbled Murrelets, would be driven to extinction as a result of this plan. This study is divided into six parts. First, we will review the Navy's plan to turn the Olympic Mountains into an Electronic Warfare Zone. Second, we will summarize unanswered questions about how this plan might harm humans and wildlife. Third, we will provide a historical summary of past attempts to save the spotted owls. Fourth, we will provide an analysis of current spotted owl population in the Olympic Mountains and evidence of how the war zone plan will destroy this population – which is already on the edge of extinction. If the Navy is allowed to turn the most important remaining habitat of spotted owls into an Electronic Warfare Zone, this will be the final nail in the coffin for one of nature's most important indicator species. Fifth, we will explain how toxic noise and electromagnetic radiation also harms humans. Sixth, we will review what you can do to stop the Navy from destroying the Olympic Peninsula and one of our nation's last remaining populations of Spotted Owls.

Part One: The Navy Plan to Turn the Olympic Mountains into a War Zone

The Olympic Peninsula, on the Northwest Corner of Washington State, is critical habitat for two endangered species, spotted owls and marbled murrelets, both of whom rely on rare Old Growth forests for their nests. Numerous environmental organizations have rated the Olympic rain forest as being one of the most important environmental ecosystems in the entire world. More than three million people visit the Olympic Peninsula every year providing more than $600 million in economic activity and tourism related jobs to the local community. This will all be gone once word gets out about the Navy's new war zone.

Recently, the US Navy submitted an application to the US Forest Service for a Special Use Permit to allow 3 large trucks - fitted with special electromagnetic wave transmitters - to be driven on Forest Service roads in the Olympic National Forest. The Navy refused to file an Environmental Impact Statement on this project claiming that these thousands of simulated war games will have no effect on people or wildlife. The public has been given until November 28 2014 to submit written public comments on this project. Here is the link if you would like to let the Navy know what you think of their plan to turn the Olympic Peninsula into a war zone. Thousands have already submitted comments opposing this project.
https://cara.ecosystem-management.org/Public//CommentInput?Project=42759
[GO HERE FIRST to find instructions on making a comment that counts:
https://www.indybay.org/newsitems/2014/11/21/18764426.php ]
...

Sadly, this project is not merely about having three trucks on Forest Service roads. Instead, the three trucks are an essential component in turning the Olympic Peninsula into an Electronic Warfare Range. The project includes building a new stationary electronic warfare transmitter – emitting the equivalent of a thousand microwave ovens of radiation - and three mobile electronic warfare transmitters – each emitting the equivalent of 100 microwave ovens - to be attacked by more than 100 “Growler” military jets – each emitting thousands of microwave ovens worth of radiation.

If the Forest Service grants the Special Use Permit, the three mobile transmitters would be driven up logging roads in the Olympic Mountains every morning at about 5 am to special staging areas – many of which are inside of or next to Old Growth Forests and critical habitat for spotted owls and marbled murrelets. These Old Growth forests have been rated as among the quietest places on earth at only 10 to 20 decibels. According to a US Fish and Wildlife Services Field Manual, even a normal human conversation of 60 decibels could disturb and harm this wildlife as every increase of 10 decibels is a doubling of the sound. So even a human whisper is twice as loud as a typical Old Growth Forest – and a normal conversation is 32 times louder than the Hoh Rain Forest.
...

To the spotted owls, sleeping in their nests near the tops of 300 foot tall one thousand year old tall trees, the toxic sound will begin as a low rumble approaching from the west. Within twenty seconds, the rumble will rise to a deafening roar of a million canons all going off at the same time. The roar will continue for twenty horrifying seconds of Hell on Earth as the defenseless owls lack not only protective ear muffs – but lack even human hands to put over their acutely sensitive ears. Twenty seconds later, one minute after the torture began, the roar will go back to a rumble and then end.

If any owls manage to survive this first horrifying day with their ears and nerves intact, the war against the owls will be repeated the following morning– and repeated again every morning and throughout every day up to 5 days a week and 52 weeks and 260 days per year – for the next 10 to 20 years!

But if this insanity were not bad enough, on every attack, not only will the owls be subjected to permanent hearing damage, so will another bird on the Endangered Species List – the Marbled Murrelet. And so will more than one billion birds who fly up and down the “Pacific Flyway” every year. And so will hundreds of other species of animals who now make the western slopes of the Olympic Mountains their home. Among those species are the Quinault Native Americans and the loyal American citizens who live in Forks Washington. They will also be attacked with ear splitting explosions once an hour every hour beginning at dawn and going throughout the day for up to 260 days per year.

The Navy says not to worry. The owls and people will barely hear the Growler jets. This is also what the Navy told the loyal Americans living at Coupeville Washington which has been in the flight path of these Growler jets since 2008. Below is a link to a series of three minute videos showing the effect of growler jets flying over the children and animals of Coupeville Washington. One parent recorded the noise at 112 decibels. Keep in mind that anything over 84 decibels can cause permanent hearing damage in humans.
http://washingtonenvironmentalprotectioncoalition.org/watch-videos-and-hear-growlers-for-yourself

[Please go to http://washingtonenvironmentalprotectioncoalition.org/ and read the rest of this excellent article filled with meaningful visual graphics ]

With increasing frequency, the Navy conducts its exercises in electronic warfare over the Olympic National Park and Olympic National Forest on the peninsula, a program the military wishes to expand along with new aircraft out of NAS Whibdey.

As journalist and war correspondent Dahr Jamail notes, “These protected national commons are also the areas in and near where the U.S. Navy aims to conduct its Northwest Electromagnetic Radiation Warfare training program, wherein it will fly 36 of its EA-18G Growler supersonic jet warplanes down to 1,200 feet above the ground in some areas in order to conduct war games with 14 mobile towers.

“What is at stake is not just whether the military is allowed to use protected public lands in the Pacific Northwest for its war games, but a precedent being set for them to do so across the entire country,” he notes.
[Go to http://www.cascadiaweekly.com/currents/navy_plans_expansion_of_war_capacity_in_pacific_northwest
and read more about the types of war planes involved and their effects]


https://www.change.org/p/us-navy-do-not-put-any-camper-sized-trucks-with-electromagnetic-radiation-equipment-to-conduct-war-exercises-with-military-aircraft-from-15-sites-in-clallam-jefferson-and-grays-harbor-counties
Add Your Comments
Support Independent Media
We are 100% volunteer and depend on your participation to sustain our efforts!