by Dan Bacher
According to Division of Oil, Gas and Geothermal Resources (DOGGR) records, at least 432 unlined pits are currently being used for disposal of oil and gas wastewater in the Central Valley, and most have been operating with significantly out-of-date waste discharge permits, or no permits at all. 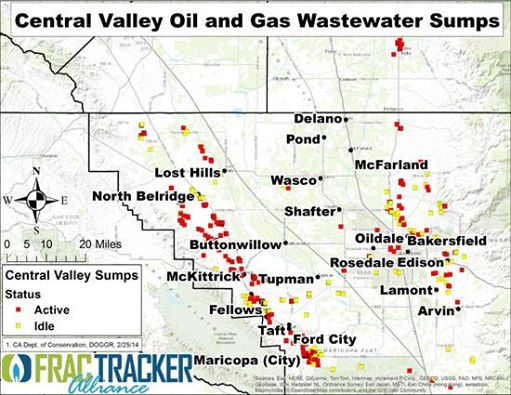 Erin Brockovich, the legal clerk and environmental activist who was instrumental in building a case against the Pacific Gas and Electric Company in 1993 for its contamination of drinking water in the Southern California town of Hinkley, is speaking out against the use of unlined pits to dispose of the massive volumes of wastewater produced by oil and gas companies conducting fracking and other oil extraction methods in the Central Valley.

On her Facebook page, she points out the irony of the oil companies employing this environmentally unsound practice that threatens precious groundwater and surface water supplies during the time of a historic drought in California:

“I am thankful California has so much water to spare it can just waste it in our oil fields.

Unlined pits are a commonly used disposal method for an unknown, yet potentially significant, portion of the 130 billion gallons of wastewater produced annually from oil and gas operations.

According to Division of Oil, Gas and Geothermal Resources (DOGGR) records, at least 432 unlined pits are currently being used for disposal of oil and gas wastewater in the Central Valley, and most have been operating with significantly out-of-date waste discharge permits, or no permits at all.

The discharge of wastewater into unlined pits threatens water resources, including potential sources of drinking and irrigation water, and impacts air quality due to the off-gassing of chemicals from the wastewater. The majority of these pits are near waterways, increasing the likelihood that spills and surface-to-groundwater migration will impact water resources. There has been no comprehensive review of locations of pits in relation to high quality groundwater.”

Not only do DOGGR records show that at least 432 unlined pits are currently being used for disposal of oil and gas wastewater, but documents obtained by the Center for Biological Diversity reveal that almost 3 billion gallons of oil industry wastewater were illegally dumped into Central California aquifers that supply drinking water and irrigation water for farms.

The Center said the wastewater entered the aquifers through at least nine injection disposal wells used by the oil industry to dispose of waste contaminated with fracking (hydraulic fracturing) fluids and other pollutants. (http://www.biologicaldiversity.org/campaigns/california_fracking/pdfs/20140915_State_Board_UIC_well_list_Category_1a.pdf)

Not only are Central Valley and coastal groundwater and surface waters threatened by the oil industry, but people concerned about the future of fish, wildlife and the oceans are outraged by the fact that Southern California's oceans were fracked over 200 times during the past 20 years.

Documents obtained under the Freedom of Information Act and media investigations by Associated Press and truthout.org reveal that the ocean has been fracked at least 203 times in the past 20 years in the Santa Barbara Channel and other locations in the south state. (http://www.usatoday.com/story/money/business/2013/10/19/calif-finds-more-instances-of-offshore-fracking/3045721/)

The expansion of fracking in California has taken take place because of enormous money and power the oil industry, the largest and most powerful corporate lobby in California, wields in Sacramento and throughout the state. The petition was released the same week that a new report published by Will Barrett, the Senior Policy Analyst for the American Lung Association in California, revealed that the oil industry from July through September 2014 spent a record $7.1 million lobbying legislators in Sacramento. (http://www.lung.org/associations/states/california/advocacy/climate-change/oil-industy-lobbying-report.pdf).

Not only should Brown ban fracking and other extreme oil extraction techniques in California's marine waters, but he should ban them throughout the entire state.

Two other things must happen also to challenge the oil industry's grip on California politics.

First, an investigation must be conducted into how Catherine Reheis-Boyd, President of the Western States Petroleum Association, the key lobbying organization for the oil industry, was appointed by Governor Arnold Schwarzenegger as Chair of the Marine Life Protection Act (MLPA) Initiative Blue Ribbon Task Force to oversee the creation of fake "marine protected areas" in Southern California waters. This is an extreme conflict of interest, especially at a time when the oil industry was fracking like crazy in Southern California coastal waters. (http://www.dfg.ca.gov/marine/mpa/brtf_bios_sc.asp)