Add an Event
Newswire
Calendar
Features
Home
Donate
From the Open-Publishing Calendar
From the Open-Publishing Newswire
Indybay Feature
Publish to Newswire
Add an Event
Related Categories: California | Central Valley | Environment & Forest Defense | Government & Elections
Feinstein's fish-killing drought bill being negotiated in secrecy
by Dan Bacher
Thursday Nov 20th, 2014 9:19 AM
“It is disappointing that Senator Feinstein is not standing up for the economic engine of the San Francisco Bay Delta Estuary, its water quality and native species that serve not only California’s economic engine but Oregon and Washington as well,” said Barrigan-Parrilla, Executive Director of Restore the Delta. “Instead of calling for every available bucket of water to be shipped immediately to unsustainable industrial agriculture, Sen. Feinstein should instead be pursuing water demand reduction actions, plus reinforcement of Delta levees, improvement of south Delta fish screens and salvage operations, elimination of harmful water transfers through the Delta, and numerous fish protections, that preclude the need for the Bay Delta Conservation Plan (BDCP) twin tunnels.” 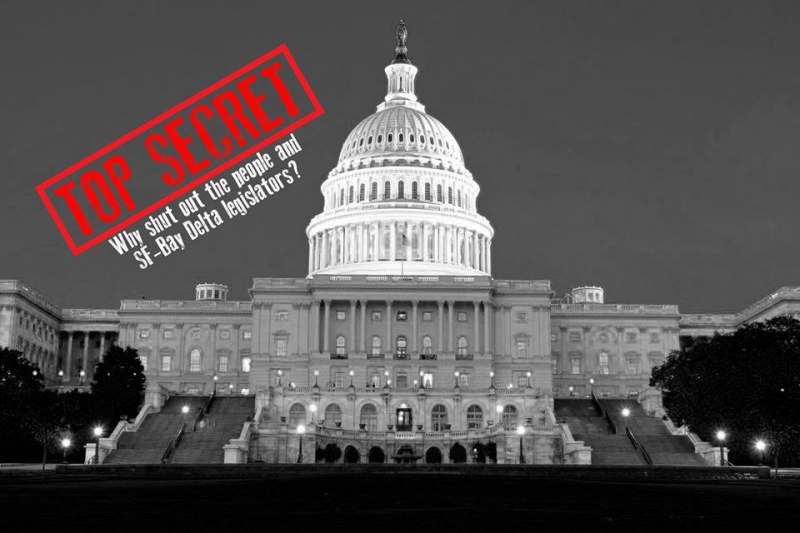 Congress, the State Legislature and Governor Jerry Brown are all notorious for their obsession with secrecy, especially when it comes to California water and environmental issues.

In the latest example of Congress's penchant for meeting behind closed doors to benefit corporate plutocrats at the expense of the public trust, Restore the Delta (RTD) has exposed Senator Dianne Feinstein (D-California) for pushing a secret “drought relief” measure to allow more water for Westlands' and Kern Water Districts' mega-growers in the midst of a severe drought.

"Senator Feinstein is carrying water for industrial growers who have planted tens of thousands of acres of almonds and other permanent crops in the midst of the past several very dry years,” said Barbara Barrigan-Parrilla, executive director of Restore the Delta, a group opposing Governor Jerry Brown’s rush to build Peripheral Tunnels that would drain the Delta and doom salmon and other Pacific fisheries.

"Sen. Feinstein is rushing through legislation to aid these growers at the expense of the rest of California," said Barrigan-Parrilla. "Right now, the head of Westlands Water District is helping write legislation for a massive water grab sponsored by Sen. Feinstein. Californians should be on red alert."

She noted there is "tremendous confusion" on what is happening with the Federal drought legislation because it is being worked on in the dark, and "we have received misinformation when calling Senator Feinstein’s office."

The bill is still being negotiated and has not passed the Senate.

Please SHARE THIS NEW VIDEO LINK http://bit.ly/videoactionalert and follow the guidelines to take action -- Call your Senators and Congressional House Reps NOW! You can also go to this article for contact information for your Senators: (http://www.dailykos.com/story/2014/11/17/1345522/-Urgent-Action-Alert-Stop-Salmon-Killing-Drought-Relief-Bill)

"Our difficulty in communicating what is happening with this bill illustrates how our leaders are keeping the people of the Bay-Delta estuary in the dark about decisions being made on water exports," said Barrigan-Parrilla.

There is no doubt that the exclusion of people most impacted from the drought - fishermen, Indian Tribes, family farmers and Northern California residents - from any input into drought bill negotiations is intentional. There is also no doubt that the drought bills are designed to benefit a wealthy few at the expense of fish, water, the environment and the people of California.

Zeke Grader, Executive Director of Pacific Coast Federation of Fishermen's Associations (PCFFA), said the language of the Senate version of the drought bill may be put on a shelf until it can be attached to a "must pass" bill in the lame duck session of Congress.

He noted that "they locked out any representation whatsoever from the fishing community from the negotiations (and drafting) while the heavy hitters from the water community (Tom Birmingham, Westlands Water District; Stewart Resnick, Paramount Farms; Metropolitan Water District of Southern California; and Kern County Water Agency) are all at the table."

There are currently two “drought relief” bills in the Senate that threaten sustainable fisheries and family farms in California, according to the latest information.

First, the House of Representatives recently passed drought legislation that seeks to accelerate massive water transfers from the SF Bay Delta to special interests in the arid regions of the South and West San Joaquin Valley.

Second, Senator Diane Feinstein is also proposing her own “drought relief” bill in the Senate.

Both bills will override environmental protections in order to provide “drought relief” for special interests. To add to the secrecy behind the bills, the public has not even been given bill numbers of both drought measures.

The SF Bay Delta cannot sustain additional water transfers without collapsing, especially in the midst of a historic drought, according to Barrigan-Parrilla. These federal drought bills will put in place provisions that will allow water exporters to override existing environmental regulations that protect the SF Bay Delta from excessive water transfers.

"If the House and Feinstein drought bill is allowed to pass, it will hasten the extinction of our fish and wildlife species and destroy our regional economies in farming and fishing, resulting in the loss of thousands of jobs and livelihoods," she stated.

The drought legislation will not only hasten the extinction of Central Valley Chinook salmon, Delta and longfin smelt, green sturgeon and other fish species, but imperils the salmon and steelhead fisheries of the Trinity and Klamath rivers.

The legislation that Feinstein is rushing through Congress cynically uses the current drought to make changes that undo critical protections for our salmon and other fisheries, and the people who rely on our river system.

"While it makes sense to take prudent steps to address the drought, it is unwise to use the current lack of water to do the bidding of mega-growers who want more and more water for permanent crops on unsuitable lands," said Barrigan-Parrilla.

"That’s who gets most of the water in our public projects: huge industrial farming operations in the Westlands and Kern Water Districts. Sen. Feinstein is responding to the urging of these growers, many of whom have contributed mightily to her campaigns," she added.

“It is disappointing that Senator Feinstein is not standing up for the economic engine of the San Francisco Bay Delta Estuary, its water quality and native species that serve not only California’s economic engine but Oregon and Washington as well,” said Barrigan-Parrilla. “Instead of calling for every available bucket of water to be shipped immediately to unsustainable industrial agriculture, Sen. Feinstein should instead be pursuing water demand reduction actions, plus reinforcement of Delta levees, improvement of south Delta fish screens and salvage operations, elimination of harmful water transfers through the Delta, and numerous fish protections, that preclude the need for the Bay Delta Conservation Plan (BDCP) twin tunnels.”

The Sacramento Bee, in an editorial on November 19, also criticized Feinstein and House Republicans for their secret negotiations on the drought bill.

She should know better.

Any legislation on the topic of water would have far-reaching implications, and ought to receive a full public airing before a congressional vote.

California’s senior senator is negotiating with Central Valley representatives and agencies that rely on water from the Sacramento-San Joaquin Delta, and is shutting out House members who represent the Delta and Northern California."

Although I often disagree with the Sacramento Bee Editorial Board, I agree with them on their stance that the drought legislation should "receive a full public airing" before any vote.

For more information, go to: http://www.restorethedelta.org
Add Your Comments
Support Independent Media
We are 100% volunteer and depend on your participation to sustain our efforts!