Add an Event
Newswire
Calendar
Features
Home
Donate
From the Open-Publishing Calendar
From the Open-Publishing Newswire
Indybay Feature
Publish to Newswire
Add an Event
Related Categories: California | Central Valley | San Diego | Environment & Forest Defense | Government & Elections
30,000 people demand that Big Oil Brown halt offshore fracking
by Dan Bacher
Sunday Nov 16th, 2014 7:19 PM
This rampant fracking has only become possible because of the cozy relationship between federal and state regulators and the oil industry, the largest and most powerful corporate lobby in Sacramento. The American Lung Association's Center for Tobacco Policy and Organizing has just released a new report revealing that the oil industry spent $70 million on lobbyists in California since 2009.

California Department of Fish and Wildlife map of so-called "marine protected areas" created on the South Coast under the Marine Life Protection Act (MLPA) Initiative. While the President of the Western States Petroleum Association Chaired the MLPA Blue Ribbon Task Force to create alleged "marine protected areas" in Southern California, the oil industry was fracking like crazy in the Santa Barbara Channel. 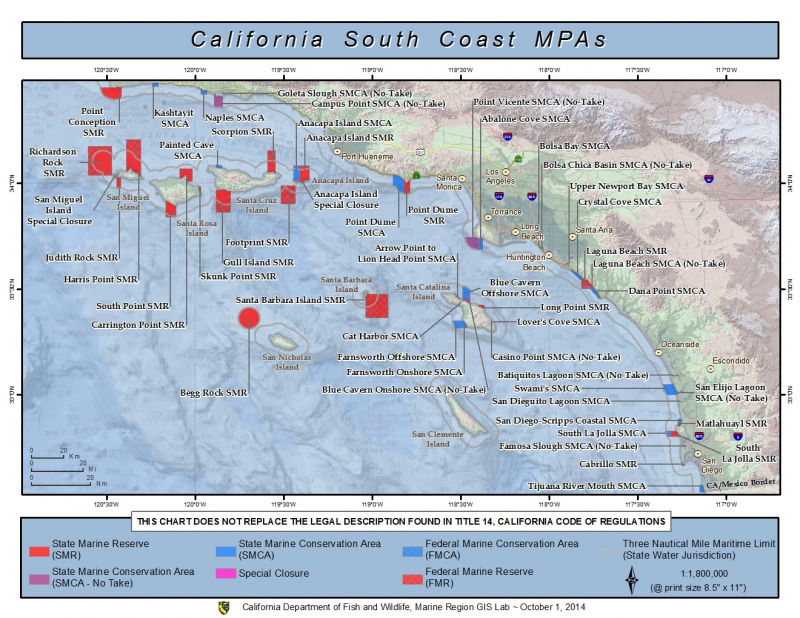 The state and federal governments have been in collusion with Big Oil in California for decades - and people concerned about the future of fish, wildlife and the oceans are fed up with the fact that Southern California's oceans were fracked at least 203 times over the past 20 years.

The petition was released the same week that a new report by American Lung Association's Center for Tobacco Policy and Organizing revealed that the oil industry from July through Sept 2014 spent an amazing $7.1 million lobbying legislators in Sacramento.

“California’s coast is a natural treasure, upon which millions of people and animals depend. But now oil companies are threatening entire ecosystems by intensifying drilling with toxic fracking techniques,” the petition says.

It urges Brown to “act now to halt this dangerous practice and preserve our oceans for future generations.”

“Thousands of people are urging Gov. Brown to stop offshore fracking before dangerous chemicals or an oil spill inflict catastrophic damage,” said Miyoko Sakashita, the Center’s Oceans director. “Fracking offshore and onshore poses a toxic threat to our air, water and wildlife. The governor can end fracking in California and reject oil development plans that would frack federal waters off our coast.”

The Center wants Brown to halt offshore fracking in state waters under the Emergency Service Act, which authorizes the governor to impose a broad array of measures to protect the health and safety of state residents. Federal law also gives governors a special say in offshore oil and gas decisions that Brown could use to fight fracking in federal waters in the Santa Barbara Channel, according to Yamashita.

This rampant fracking has only become possible because of the cozy relationship between federal and state regulators and the oil industry, the largest and most powerful corporate lobby in Sacramento.

"The California Coastal Commission, meeting this week in Half Moon Bay, has struggled to determine the full extent of offshore fracking, which involves blasting water and industrial chemicals into the seafloor at pressures high enough to crack rocks and release oil and gas," according to Sakashita.

Offshore fracking is no surprise

The intensive fracking taking place off the California coast is no surprise to grassroots environmentalists, fishermen and Tribal leaders who challenged the corrupt Marine Life Protection Act (MLPA) Initiative.

In one of the biggest conflicts of interest in recent California history, Catherine Reheis-Boyd, President of the Western States Petroleum Association (WSPA) and leader of the campaign to expand offshore oil drilling and fracking in California, CHAIRED the Marine Life Protection Act (MLPA) Initiative Blue Ribbon Task Force to create fake "marine protected areas" on the South Coast. She also served on the task forces to create the alleged "marine protected areas" on the Central Coast, North Central Coast and North Coast.

The MLPA Initiative, funded by the Resources Legacy Fund Foundation, created so-called "marine protected areas" that fail to protect the ocean from fracking, oil drilling, pollution, military testing, corporate aquaculture and all human impacts on the ocean other than fishing and Tribal gathering. These "marine protected areas" are good for Big Oil, polluters and corporate interests - and bad for sustainable fishermen, tribal gatherers and the public trust.

The Western States Petroleum Association that Reheis-Boyd heads is the most powerful corporate lobbying group in California. The association spent over $4 million, a new record, for the three month period from July 1 through September 30. (http://truth-out.org/news/item/27373-western-states-petroleum-association-spent-4-million-lobbying-this-summer)

Will Barrett, the Senior Policy Analyst for the American Lung Association in California, has just published a new report revealing that the oil industry has spent $70 million on lobbyists in California since 2009. (See the in-depth analysis here: http://www.lung.org/associations/states/california/advocacy/climate-change/oil-industy-lobbying-report.pdf).

In the last three months alone, the oil industry has spent an unprecedented $7.1 million lobbying elected officials with a major focus on getting oil companies out of a major clean air regulation.

And this doesn’t include spending on ballot measures or the recent election, including Chevron spending $3 million (unsuccessfully) to elect “their” candidates to the Richmond City Council. Big Oil also dumped $7.6 million into defeating a measure calling for a fracking ban in Santa Barbara County and nearly $2 million into an unsuccessful campaign to defeat a measure banning fracking and other extreme oil extraction techniques in San Benito County.

The report documented record money spent on lobbying by the oil industry through the first 9 months of 2014. Big Oil has spent $13.6 million lobbying elected officials so far this year:
• This surpassed the prior record ($13.5 million) seen in all of 2013.
• The industry pent $1.5 million per month lobbying in 2014.
• Oil interests represented 17 percent of all lobbying in California last quarter.

The report also revealed huge increases in July-September 2014 compared to previous quarters. Big Oil made significant increases in spending in 2014 as the legislative session came to a close and as the industry intensified its anti-AB 32 campaign:
• The Western States Petroleum Association (WSPA), whose president oversaw the creation of so-called "marine protected areas" in Southern California, spent $4 million in the last three months alone, more than twice historical levels
• WSPA spent more than $7 million so far in 2014, leading all statewide lobbying by a wide margin
• WSPA paid nearly $2.5 million to KP Public Affairs in 2013-14, the state’s highest paid lobbying firm.
• Eight oil interests spent their most ever lobbying in California
• Four broke annual spending records in just 9 months.
• Phillips66 (4), Chevron (6) and Valero (9) are also all among the top ten lobbying spenders from July-Sept 2014.
• Phillips66 spent $880,000, 4 times over its recent average
• Valero spent $542,000 in 3 months - more than the prior 42 months combined.

For more information, go to: http://www.lung.org/associations/states/california/advocacy/climate-change/oil-industy-lobbying-report.pdf
Add Your Comments
Support Independent Media
We are 100% volunteer and depend on your participation to sustain our efforts!