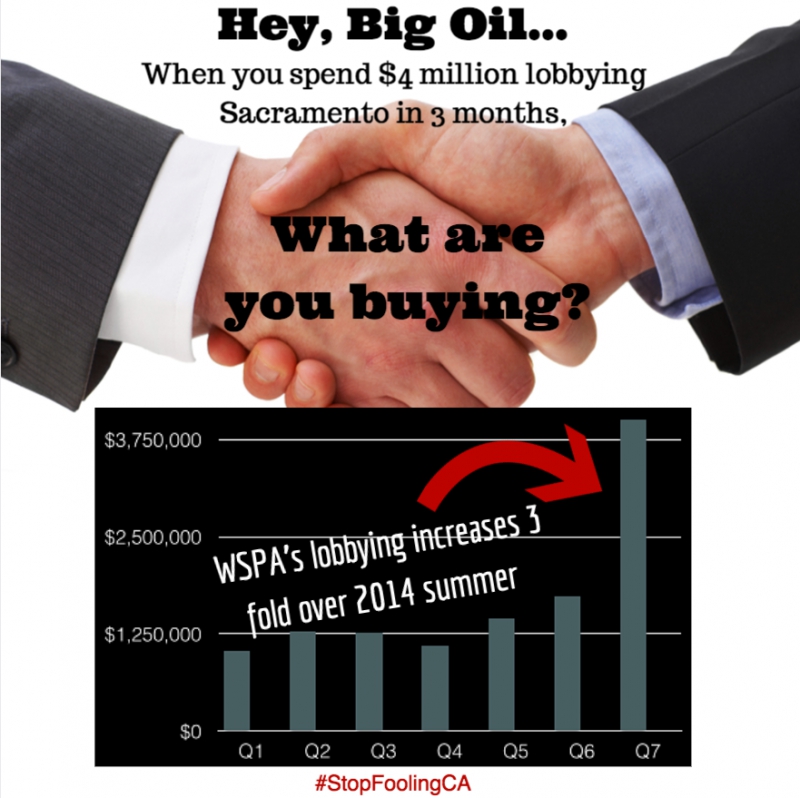 The oil industry spent millions in political campaigns in California this election cycle, led by the over $7.6 million that they used to defeat a measure calling for a fracking ban in Santa Barbara County.

Catherine Reheis-Boyd, President of the Western States Petroleum Association (WSPA) and former Chair of the Marine Life Protection Act (MLPA) Initiative Blue Ribbon Task Force to create so-called "marine protected areas" in Southern California, lauded the "volunteers" of the No on Measure P campaign for their successful efforts in a tweet to her supporters:

“Congrats to the @NoOnMeasureP team & all the volunteers who helped make today reality! Glad Santa Barbara got it right on science & facts!”

While mainstream media focused considerable attention on the millions of dollars dumped into political campaigns, they failed to mention the record $4,009,177.87 that the Western States Petroleum Association spent on lobbying legislators from July 1 through September 30.

A news release from Sierra Club California reported, “Just days before the election, 7th quarter lobbying filings for the two-year legislative session were released. They showed that the Western States Petroleum Association (WSPA), the lead trade association for oil companies, spent more than $4 million to influence legislators during the period including July, August and September this year, the last three active months of the legislative session. That compares to $1.7 million the group spent during the 6th quarter.”

The largest amount of money spent on lobbying firms, $375,800.53, went to KP Public Affairs in Sacramento.

Stop Fooling California (http://www.stopfoolingca.org), an online and social media public education and awareness campaign that highlights oil companies’ efforts to mislead and confuse Californians, asked in a tweet and on Facebook, “We know what @OfficialWSPA lobbyists give Sacramento. What are you getting in return?"

Besides fighting California’s clean air laws, massive oil industry opposition resulted in the defeat of a bill to protect a marine protected area in Southern California from oil drilling. On August 26, State Senator Hannah-Beth Jackson’s bill to ban offshore oil drilling from an area of state waters in the Santa Barbara Channel known as Tranquillon Ridge stalled on the Assembly Floor effectively killing the bill for the year.

The mainstream media and the "alternative" media, with this exception of this reporter, failed to note the extreme irony of the fact that WSPA President Reheis-Boyd had chaired the panel to create alleged "marine protected areas" in Southern California and sat on the panel to develop "marine protected areas" on the Central Coast! (https://www.indybay.org/newsitems/2014/09/08/18761341.php)

The oil industry also defeated Senator Holly Mitchell and Mark Leno's bill, SB 1132, calling for a fracking moratorium in California. State Senators voting 'NO' on the fracking moratorium bill on May 29, 2014 received 14 times as much money the oil and gas industry, on average ($25,227), as senators voting 'YES' ($1,772) from January 1, 2009 to December 21, 2012, according to MapLight, a non profit organization revealing money's influence on politics.

The WSPA and the oil companies also were able to gut Senator Fran Pavley’s already weak Senate Bill 4, the "green light for fracking" bill, by introducing poison pill amendments before the Legislature passed it and the Governor signed it in September 2013.

Besides serving as the voice for the oil industry, WSPA President Reheis-Boyd also wears another hat – “marine guardian" - that has allowed her and other corporate interests to help eviscerate "marine protection" in California. I have discussed this conflict of interest in many of my previous articles, but it essential to review again because the mainstream media and most of the "alternative" media refuse to discuss it.

In one of the biggest conflicts of interest in recent California history, Reheis-Boyd served as the Chair of the privately-funded Marine Life Protection Act (MLPA) Initiative that created fake “marine protected areas” in Southern California. She was appointed by the Schwarzenegger administration to the position, in spite of a massive outcry by fishermen, Tribal members and grassroots environmentalists over the enormous conflict of interest that her appointment presented - and how this appointment further tainted an already corrupt process.(http://www.dfg.ca.gov/marine/mpa/brtf_bios_sc.asp)

While she was pushing for increased fracking and offshore oil drilling in California, the oil industry lobbyist also served on the task forces to create questionable “marine protected areas” on the Central Coast, North Central Coast and North Coast.

These alleged “marine protected areas” fail to protect the ocean from fracking, oil drilling, pollution, military testing, corporate aquaculture and all human impacts on the ocean other than sustainable fishing and gathering. The Marine Life Protection Act Initiative, lauded by corporate “environmentalists” and state officials as the “most open and transparent” process in California history, was in fact one of the most corrupt and conflict of interest-infested environmental fiascos ever seen in the state.

While there are many powerful industries based in California, ranging from the computer and high tech industry to corporate agribusiness, no industry has more influence over the state's environmental policies than Big Oil.

A report released on April 1, 2014 by the ACCE Institute and Common Cause also revealed that the oil industry spent $123.6 million to lobby elected officials in California from 1999 through 2013. This was an increase of over 400 percent since the 1999-2000 legislative session, when the industry spent $4.8 million. In 2013-2014 alone, the top lobbyist employer, Western States Petroleum Association, spent $4.7 million.

The report also documents that Big Oil has spent $143.3 million on political candidates and campaigns – nearly $10 million per year and more than any other corporate lobby – over the past fifteen years. (http://www.indybay.org/uploads/2014/04/10/bil_oil_floods_the_capitol_4.1.14v2.pdf)

Yet these millions of dollars are just chump change to Big Oil, since the five big oil companies made over $93 billion in profits in 2013. This year their estimated profits to date are over $78 billion.(http://www.americanprogress.org/issues/green/news/2014/02/10/83879/with-only-93-billion-in-profits-the-big-five-oil-companies-demand-to-keep-tax-breaks/)