Photo of Jessica Lopez, Chair of the Concow Maidu Tribe, Caleen Sisk, Chief of the Winnemem Wintu Tribe, and Morning Star Gali of the Pit River Tribe at the State Capitol in Sacramento after the "Water is Sacred" march from the Tower Bridge on "Native American Day" on September 26. 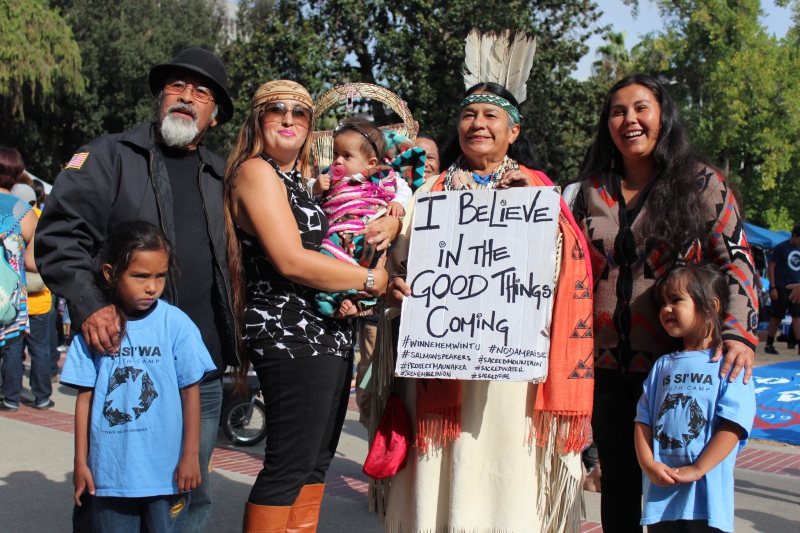 Tribal Leaders Urge NO Vote On Prop. 1, the Water Bond

The Yurok Tribe, on its Facebook page election recommendations, urged its members to vote NO on Proposition 1. The Tribal Government said it is “concerned that Proposition 1 may divert more Trinity River water, which harms the Klamath River.”

The Yurok Nation is the largest tribe in California, with over 5500 members. The Tribe has federally recognized subsistence, commercial and ceremonial fishing rights on the Klamath River, the largest producerof salmon in the state after the Sacramento River.

The Tribe has also been one of the strongest critics of the terminally flawed "science" and violation of traditional fishing and gathering rights that has taken place under the privately-funded Marine Life Protection Act (MLPA) Initiative.

Danielle Vigil-Masten, Chairwoman of the Hoopa Valley Tribe on the Trinity River, urges people to get out and Vote NO on Prop. 1. today, November 4.

"California - vote NO on California Prop. 1," Vigil-Masten wrote on Facebook. "This bill will kill the natural ecosystem and rivers and tributaries on the North Coast. This is for money to construct a dam in Maxwell or in that area."

"There has been no information provided about the damage this can cause to environment as well as to who will receive the benefit. It will also flood SACRED SITES of tribes," she noted.

Caleen Sisk, Chief and Spiritual Leader of the Winnemem Wintu Tribe, said the water bond, peripheral tunnels, Shasta Dam raise and other water projects now being planned by the state and federal governments are in in reality "one Big Project" that will destroy salmon, rivers and groundwater supplies.

She emphasized, "You have to look at the whole picture and everything in between from Shasta Dam to the Delta estuary. We need to ask what is affected by our actions and who is benefitting from them? These are not separate projects; they are all the same thing that the State is asking us to fund - California water being manipulated for the enrichment of some and the devastation of cultures, environments, and species all in the name of higher profits.”

The Pulga Rancheria Concow Maidu Indians are also officially opposed to the Water Bond. Jessica Lopez, Tribal Chairwoman, has been very vocal against the peripheral tunnels and fracking at protests and rallies at the State Capitol over the past year.

The water bond allocates over $3.6 billion, without oversight by the legislature, to build dams and pay for water transfers for subsidized corporate agribusiness interests growing almonds, pistachios and other crops on toxic, drainage-impaired land on the west side of the San Joaquin Valley. Prop. 1 with interest will cost CA taxpayers $14.4 billion or $360 million per year for 40 years out of our state’s general fund, money that could be used for other needs like education and healthcare.

Save water, save money - vote NO on Proposition 1!

For more information go to http://www.noonprop1.org