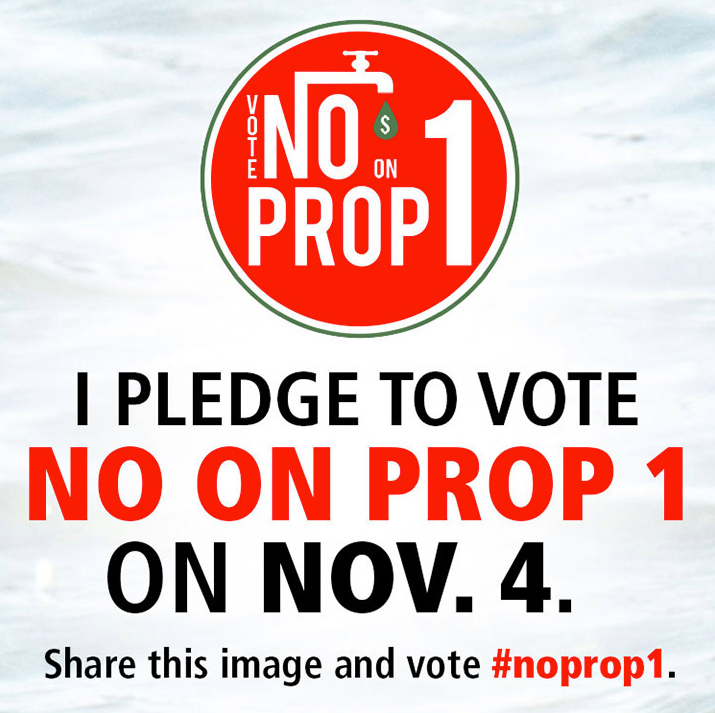 The debate over the pros and cons of Proposition 1, Jerry Brown's $7.5 billion water bond, is very important, but an even bigger issue in any environmental battle or process is the money behind the campaign.

The big corporate money behind the water bond largely determines who the bond will benefit - billionaires, corporate agribusiness, oil companies and the 1 percent, not the people, fish or wildlife of California.

Contributions to Governor Jerry Brown's Yes on Props 1 and 2 Committee have jumped to $13,880,528.43, according to the latest data posted on the California Secretary of State's website.

The contributions feature millions of dollars from billionaires, corporate agribusiness, Big Oil and and the tobacco industry - corporate interests that all expect a big return for their "investment" in the corrupt "play to pay" politics that rules California today.

But this isn’t the only committee funding the Yes on 1 campaign. When you consider the other committees backing Prop.1 listed on the Secretary of State’s website, the total amount of contributions jumps by another $2,541,257.91 to $16,421,785.91!

The “California Business Political Action Committee,” sponsored by the California Chamber of Commerce raised, $550,000 for Yes on 1 and 2 during the period from January 1 to October 18, 2014.

The “Wetlands Conservation Committee, Yes on Prop. 1,” sponsored by Ducks Unlimited, Audubon California and the Nature Conservancy, raised $215,000 from January 1 through October 18.

Other committees backing Prop. 1 include:

The campaign for and against Proposition 1, the $7.5 billion water bond on the November 4 ballot, remains the classic David and Goliath battle of this election season in California.

Dignity Health, which contributed $250,000, is the latest corporate contributor to the Yes on Prop. 1 campaign. That donation followed the contribution of $250,000 to the campaign by Aera Energy LLC, a company jointly owned by affiliates of Shell and ExxonMobil.

The Bakersfield-based Aera Energy is one of California's largest oil and gas producers, accounting for nearly 25 percent of the state's production, according to the company’s website. (http://www.aeraenergy.com/who-we-are.asp)

Corporate agribusiness interests, the largest users of federal and state water project water exported through the Delta pumping facilities, have donated a total of $850,000 to the Yes on Prop. 1 campaign. The California Farm Bureau Federation contributed $250,000 and the Western Growers Service Association donated $250,000.

Stewart Resnick, the Beverly Hills agribusiness tycoon, owner of Paramount Farms and largest orchard fruit grower in the world, contributed $150,000 and the California Cotton Alliance contributed $200,000 to the Yes on Prop. 1 campaign.

Resnick and his wife, Lynda, have been instrumental in promoting campaigns to eviscerate Endangered Species Act protections for Central Valley Chinook salmon and Delta smelt populations and to build the fish-killing peripheral tunnels - and have made millions off reselling environmental water to the public.

The largest individual donor in the Yes on Prop. 1 campaign to date remains Sean Parker, who has contributed $1 million to the campaign. Parker is an entrepreneur and venture capitalist who cofounded the file-sharing computer service Napster and served as the first president of the social networking website Facebook. He also cofounded Plaxo, Causes, and Airtime.

Four members of the Fisher family, who own the controversial Gap stores, have collectively donated $1.5 million to the Yes. on Prop. 1 and Prop. 2 campaign. They also own the Mendocino Redwood Company and Humboldt Redwood Company, formerly the Pacific Lumber Company (PALCO), more than half a million acres of redwood forest lands in total. (http://www.indybay.org/newsitems/2014/09/28/18762178.php)

In contrast to the $13,212,726 in donations to the Prop. 1 and 2 campaigns listed on the FPPC website, the FPPC states, “No committee opposing this ballot measure raised enough money to reach the reporting threshold."

Folks like Stewart Resnick, the Fisher Family and other billionaires, the oil industry and corporate agribusiness interests aren't dumping millions into the Yes on Prop. 1 campaign for the common good or benefit of all Californians - they're doing it as a relatively small investment to advance their own greedy interests and to further privatize and plunder the public trust for their own personal profit.

Six simple reasons why you should vote no on Prop. 1:

• Prop. 1 will spend $2.7 billion for costly and inefficient dams and bill the public for the expense.

• Prop. 1 would support the Governor’s Twin Tunnels project, as indicated by his Stanford speech on October 20. Brown said that Proposition 1 would provide components missing from the State Water Project “enacted by my father.” These components, Brown ominously intoned, would “deal with the Delta.”

• Prop. 1 violates the public trust. The bond provides hundreds of millions of dollars in funding to purchase water allegedly for public trust purposes, to then divert it from the Delta as “abandoned” water for billionaires’ almond orchards.

• Prop. 1 ignores the bedrock realities of California’s water dilemma. Consumptive water right claims in California already exceed the amount of available water by 5.5 times. Proposition 1 does nothing to rectify this situation. Indeed, it ignores the one thing that must be done if we’re going to stabilize the state’s water policies: balance water rights claims to actual water supplies.

• Prop. 1 provides no strategies to mitigate the impacts of drought. The bond is thus a classic bait-and-switch: It implicitly promises drought solutions it does not deliver.

• Prop. 1 underfunds recycling, conservation and other drought solutions that will provide local jobs and reduce reliance on imported water supplies.

For more information, go to http://www.noonprop1.org