Add an Event
Newswire
Calendar
Features
Home
Donate
From the Open-Publishing Calendar
From the Open-Publishing Newswire
Indybay Feature
Publish to Newswire
Add an Event
Related Categories: California | Central Valley | East Bay | Environment & Forest Defense | Government & Elections
The Home of the Free Speech Movement Suppresses Freedom of Speech
by Dan Bacher
Wednesday Oct 22nd, 2014 5:14 PM
"We were there Tuesday because the administration shut down the event about the privatization of a natural resource, water, at the site of resistance against the privatization of land," said Paula Jaramillo of Students for Engaged and Active Learning (SEAL). "We were shut down by someone who actively privatizes life itself through patenting GMOs." 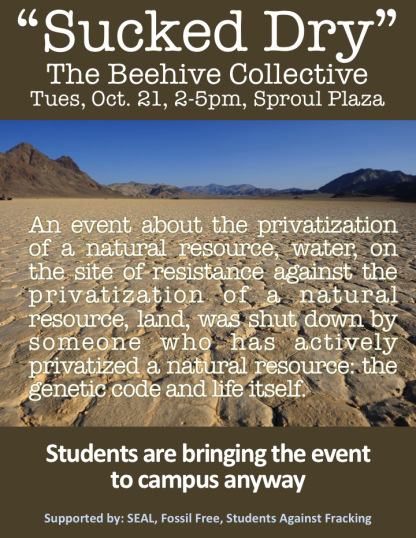 The Home of the Free Speech Movement Suppresses Freedom of Speech

In the home of the Free Speech Movement at the U.C. Berkeley campus, students got a rude awakening when what they describe as an administrator "with clear political motivations" shut down the Beehive Collective's art project on drought and Proposition 1, Governor Jerry Brown's $7.5 billion water bond.

"We have an autocracy which runs this university. It's managed. We asked the following: if President Kerr actually tried to get something more liberal out of the Regents in his telephone conversation, why didn't he make some public statement to that effect? And the answer we received -- from a well-meaning liberal -- was the following: He said, 'Would you ever imagine the manager of a firm making a statement publicly in opposition to his board of directors?'

That's the answer! Now, I ask you to consider: if this is a firm, and if the Board of Regents are the board of directors, and if President Kerr in fact is the manager, then I'll tell you something: the faculty are a bunch of employees, and we're the raw material! But we're a bunch of raw material[s] that don't mean to have any process upon us, don't mean to be made into any product, don't mean to end up being bought by some clients of the University, be they the government, be they industry, be they organized labor, be they anyone! We're human beings!

These prophetic words become even more chilling and real 50 years later, after the passage of the Patriot Act and the NDAA, the coordinated, brutal suppression of the Occupy movement across the country, the surveillance and political repression at UC Davis and other campuses, the militarization of the police and security forces, the NSA spying scandal and the increasing attacks on Freedom of Speech and the Constitution under the presidency of a Constitutional lawyer.

In a stand for the First Amendment, students at the University of California, Berkeley brought the Beehive Collective’s art project on drought and Prop. 1 on Tuesday, October 21, to the steps of Sproul Plaza, where 50 years ago students demonstrated for their right to disseminate political materials. From 2-5 pm, the Beehive Collective displayed their art and informally told the stories of their pieces to the gathered students.

"The event highlights the privatization of water across Mesoamerica and the potential for water privatization in CA under Prop 1 - and was originally scheduled as an event at the Gill Tract Community Farm," according to a news release from Students for Engaged and Active Learning (SEAL). "This community farm was won through Occupy the Farm’s acts of civil disobedience protesting the privatization of this land, and is now the site of a partnership project between the community and the College of Natural Resources at UC Berkeley."

The students said the event was shut down with a week’s notice by Steve Lindow, the first researcher to do field trials of a Genetically Modified Organism (GMOs), who is now the Executive Associate Dean in the College of Natural Resources.

Lindow claimed that the art show was “not relevant to the research at the community farm," despite clear connections between the Beehive Collective’s work on drought and industrial agriculture, the students reported. Water bond opponents have criticized Prop. 1 as a sweetheart bill for water-intensive industrial agriculture.

The students said the event had been approved with strong support from community members, students, and the farm’s events working group. This was the first interference in farm events from the administration - and students feel that it is a clear example of repression against free speech on campus, with political motivation.

"We were there Tuesday because the administration shut down the event about the privatization of a natural resource, water, at the site of resistance against the privatization of land," said Paula Jaramillo of Students for Engaged and Active Learning (SEAL). "We were shut down by someone who actively privatizes life itself through patenting GMOs."

"Prop. 1 is known as a sweetheart initiative for Big Ag and the event was supposed to take place at Gill Tract, where we are seeking to find sustainable alternatives to industrial agriculture, and it was a perfect site to have this event. It was a shame the administration denied the students this opportunity - and it was complete repression of freedom of speech because of a political motivation," Jaramillo explained.

“The Beehive Collective, named after an important pollinator, is of absolute relevance to the research of the Gill Tract Community Farm," confirmed Sakura Saunders, Beehive Collective Member. "The Beehive Collective, which has a long history of creating art work that represents the negative ecological impacts of GMO crops and monocultures, was set to present on a topic relevant to all farmers within California: water."

"Specifically, the group aimed to bring a critical perspective on a water infrastructure bond, Prop. 1, which will appear on Californian’s ballots in the upcoming election. It is a shame that this timely and politically-relevant talk could not go forward as scheduled, even after posters were distributed listing the Gill Tract Farm as the venue," she emphasized.

I left a phone message at the office of Steve Lindow, Professor and Executive Associate Dean, College of Natural Resources, and I'm still waiting for his response.

Students for Engaged and Active Learning, Fossil Free Cal, and Students Against Fracking supported the event. The event at the Gill Tract had also received the support of Food and Water Watch, a national consumer group that has endorsed NO on Prop 1.

California is in the midst of a historical drought, the most severe the region has had in the last 500 years. This water crisis has devastated resources, with several communities facing the prospect of running dry. A number of projects advocating infrastructure development such as the BDCP and Prop 1 have been proposed as solutions for the state, but are they truly in the interests for all? What are their impacts to our drying rivers and reservoirs? Fisheries and communities?

Drawing inspiration from struggles against large-scale infrastructure projects throughout MesoAmerica, the Beehive collective’s larger than life art pieces are engaging lessons in political education. This informal storytelling event will guide students on a visual journey touching on the local and the global struggle for control and protection of water.

The Beehive Collective and the No on Prop. 1 coalition are currently on a tour of California, Sucked Dry: Examining Drought and Privatization from Mesoamérica to California, to bring their arguments for a sustainable water future and against the water bond to Bay Area residents in an interactive events in the Bay Area.

Beehive Collective’s Ryan Camero said, "Our graphics are a great way to spark conversations about complex matters like the current water politics of California.”

The Beehive Design Collective is an all-volunteer organization of activists, artists, educators and organizers. Their main focus is creating and presenting graphic works about global issues.

For more information: go to http://www.noonprop1.org

e-mail: pollinators [at] beehivecollective.org
phone: 209-683-8879
Add Your Comments
LATEST COMMENTS ABOUT THIS ARTICLE
Listed below are the latest comments about this post.
These comments are submitted anonymously by website visitors.