Add an Event
Newswire
Calendar
Features
Home
Donate
From the Open-Publishing Calendar
From the Open-Publishing Newswire
Indybay Feature
Publish to Newswire
Add an Event
Related Categories: San Francisco | Police State & Prisons
Do You Remember Columbus Day 2012? When SFPD attacked and beat an Anti Colonial Demo?
by WeCopwatch
Monday Oct 13th, 2014 11:16 AM
While the legal case is long over, we don't forget the force used by SFPD against people taking a stand against colonialism.

The arrests occurred during the Saturday action in a series of demonstrations on Columbus Day weekend against current forms of colonization and empire, as well as the racist celebrations of genocide and conquest that is Columbus Day. The actions were organized in solidarity with indigenous struggles: from the East Bay fight to protect sacred sites to the ongoing struggles in Mexico and Canada against the mass destruction caused by industrial resource extraction and logging. The weekend’s demonstrations also marked the eleven-year anniversary of the Afghanistan war and occupation, a brutal example of contemporary empire building.

Nearly 200 took to the streets of San Francisco’s financial district in an anti-colonial anti-capitalist march on that Saturday afternoon while warplanes flew overhead as part of the annual Fleet Week. Demonstrators were immediately confronted by a very large police mobilization that included multiple squads on bicycles and motorbikes, as well as lines of riot police and many police vehicles. Officers quickly tried to box in the crowd and beat it on to the sidewalk. Some in the crowd refused to leave the streets but SFPD had clearly decided to crush the march within the first blocks. The police attacked a random section of the crowd towards the back of the march and those who were unable to run away were brutally beaten to the ground, surrounded and arrested. Multiple comrades suffered a range of injuries including blows to the head, a broken nose and a split chin.

Once booked, those arrested were not cited and released as is standard practice in almost all San Francisco mass arrests. Instead, all 19 were slapped with the same selection of felony charges including felony conspiracy to riot. Their phones were immediately confiscated and they were all ubjected to interrogation. Those who were unable to be quickly bailed out were held in jail for four or five days and were released only after agreeing to have their bodies searched for tattoos and allowing photographs to be taken.

Meanwhile, SFPD released a statement to the media which recklessly stated that all those in the march “identified themselves as members of the Criminal street gang, Black Blok”. The statement also claimed that those arrested were responsible for September’s clashes between demonstrators and police in the Mission district the previous month following a police shooting. SFPD simultaneously released all the arrestees’ mug shots along with their full names and birth dates. Much of the corporate media published SFPD’s statement nearly word for word and included the mugshots which spread across the internet.

A warrant has been issued to seize all information within the confiscated phones using the justification that the case involves conspiracy charges and potential street gang involvement. Subpoenas have also been issued for two Twitter accounts allegedly connected with those arrested. All of these unusual forms of police repression against demonstrators in San Francisco are directly connected to the involvement of the SFPD Gang Taskforce in the crackdown and investigation. This powerful police unit regularly cooperates with the federal government and is usually reserved for criminalizing poor and working class communities of color.

While we are not surprised that the state is actively working to crush all forms of resistance and organizing amongst anti-capitalists, anarchists and other radicals, we feel this case is a particularly important example of one avenue this repression can take. The same tools that are designed to oppress and control marginalized communities and neighborhoods, such as gang task forces and gang injunctions, are gradually making their way into the repertoire of repression deployed against social movements in the Bay Area. The intersections and connections that exist between these communities and movements represent the greatest threat to the state and the repression we are seeing is a direct attempt to crush any organizing of that kind.

We see this as one manifestation of the broader crackdown unfolding across the country– from the FBI entrapment cases against Ohio anarchists to the ongoing federal grand jury targeting anarchists and radicals in the Pacific Northwest. Each of these cases illustrates a different form of contemporary repression yet each has an identical end goal: eliminate any resistance or opposition to the status quo of capitalism, the state and all forms of domination and exploitation. We stand in solidarity with all those working to counter this repression and those who have been directly targeted by it. We see these struggles as intimately tied with those of all marginalized and oppressed peoples who share a common enemy and are organizing towards liberation.
http://wecopwatch.org
§Video
by WeCopwatch Monday Oct 13th, 2014 11:16 AM
Copy the code below to embed this movie into a web page:
Download Video (37.5MB) | Embed Video
http://wecopwatch.org
§
by WeCopwatch Monday Oct 13th, 2014 11:16 AM 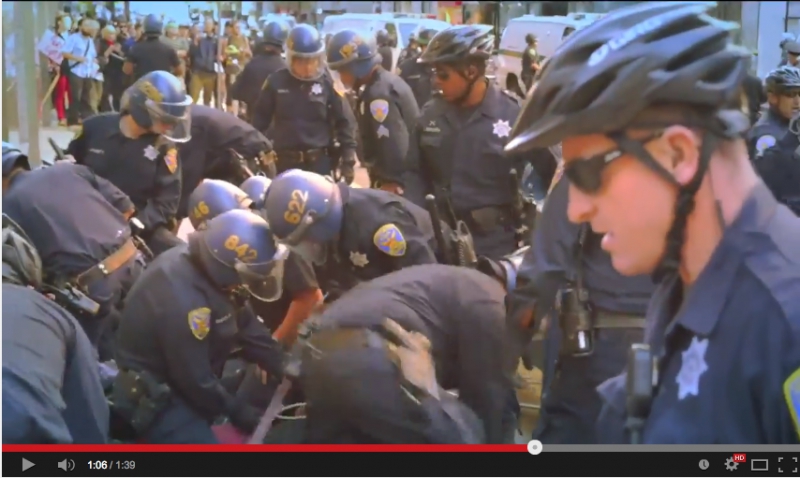 original image (854x511)
http://wecopwatch.org
Add Your Comments
LATEST COMMENTS ABOUT THIS ARTICLE
Listed below are the latest comments about this post.
These comments are submitted anonymously by website visitors.