Add an Event
Newswire
Calendar
Features
Home
Donate
From the Open-Publishing Calendar
From the Open-Publishing Newswire
Indybay Feature
Publish to Newswire
Add an Event
Related Categories: Santa Cruz Indymedia | Police State & Prisons | Racial Justice
Salinas Police Release Names of Officers Who Killed Residents in 2014
by Monterey County Police News
Tuesday Sep 30th, 2014 3:16 PM
The Salinas Police Department sent a letter to various media outlets today releasing the names of the officers involved in killing four Latino Salinas residents in separate incidents this year. The department had delayed releasing the names due to what they called "threats," but now says those threats have subsided. In each shooting, a Sergeant with 10-years or more of service with the SPD was one of the shooters. SPD continues to claim investigations are still ongoing into these killings. 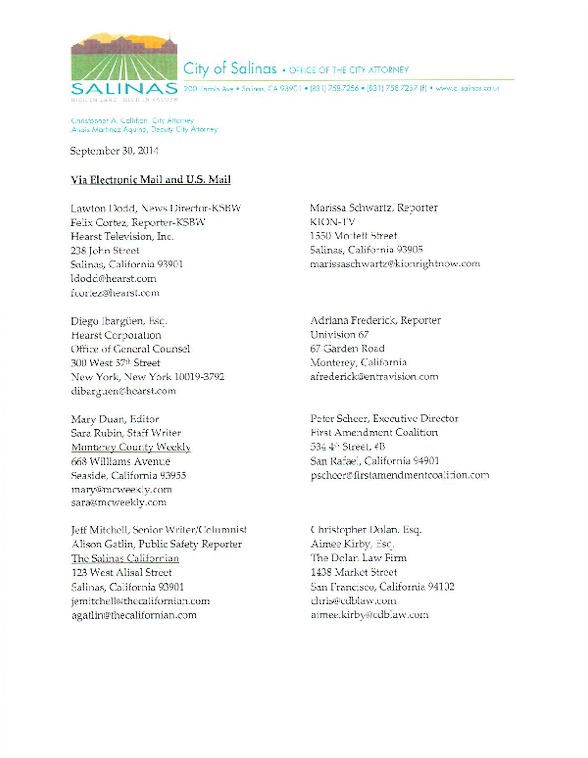 Osman Hernandez, killed on May 9, 2014
Officers who killed him: Sergeant George Lauricella and Officer Derek Gibson, both of the Salinas Police Department.

Carlos Mejia-Gomez, killed on May 20, 2014
Officers who killed him: Sergeant Danny Warner and Officer Josh Lynd, both of the Salinas Police Department.

Frank Miguel Alvarado, killed on July 10, 2014
Officers who killed him: Sergeant Brian Johnson and Officer Scott Sutton, both of the Salinas Police Department.
Add Your Comments
LATEST COMMENTS ABOUT THIS ARTICLE
Listed below are the latest comments about this post.
These comments are submitted anonymously by website visitors.