Add an Event
Newswire
Calendar
Features
Home
Donate
From the Open-Publishing Calendar
From the Open-Publishing Newswire
Indybay Feature
Publish to Newswire
Add an Event
Related Categories: Iraq | International | Anti-War
Turkish anarchists join the fight to save Kobane from ISIS; updates from Kobane
by C
Saturday Sep 27th, 2014 7:27 PM
Istanbul anarchists along other leftists, feminists, and 'Gezi park types' have managed to cross over into Syria and the northern town of Kobane which is currently threatened by ISIS. Vice reported yesterday that ISIS is within 5 miles of the city and are attacking with US military equipment including tanks that outmatches the weapons available to the YPG - Kurdish People's Protection Units . Vice also reported that "Hundreds of Turkish Kurds are arriving too, sneaking or bribing their way across the border to fight alongside the YPG" The photo shows a banner of the anarchist group DAF apparently just after the border has been crossed. 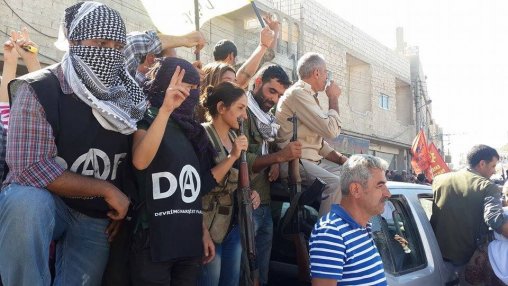 
Istanbul anarchists along other leftists, feminists, and 'Gezi park types' have managed to cross over into Syria and the northern town of Kobane which is currently threatened by ISIS.

Vice reported yesterday that ISIS is within 5 miles of the city and are attacking with US military equipment including tanks that outmatches the weapons available to the YPG - Kurdish People's Protection Units . Vice also reported that "Hundreds of Turkish Kurds are arriving too, sneaking or bribing their way across the border to fight alongside the YPG"

The photo shows a banner of the anarchist group DAF apparently just after the border has been crossed. The statement we were sent says "People are suffering from hunger and thirst, getting ill, getting injured; migrating and dying. They are still fighting in that struggle for existence. People are fighting not for the schemes and strategies around meeting tables, not for income, but for their freedom"

Added - this is a translation from our sister group in France, Alternative libertaire

"Thousands of young people, socialists, trade unionists, revolutionary, feminist, libertarian poured in from all over Turkey to Kobanê. They and they go there to support and defend the city réfugié.es.

The Turkish army tries to disperse them, as she is accused of being much more permissive with the jihadists who are trying, too, to cross the border to join Daech.

Despite the dams of the Turkish army, hundreds of activists and militants have managed to cross the border. Among them, the comrades of the Revolutionary Anarchist Action Group, who made the trip to Istanbul to join the defense of Kobanê, and sent these photos."

UPDATES from besieged Kobane from hawarnews.com

YPJ Commander Meryem Kobanê confirmed that U.S. circrafts carried out flights in some areas, but denied reports that ISIS positions were targeted.

Kobanê pointed out that they have received information from the commanders of all fronts, and stressed that the reports about American airstrikes are not true.

According to a journalist from the Hawarnews agency (ANHA) clashes between YPG and IS gangs have been erupted last night in south of Kobanê. Because the gangs of IS have suffered heavy losses they attack with heavy weapons and tanks, which they have seized in Iraq and Syria. On Thursday YPG forces were able to destroy an ISIS in southern Kobanê.

Since the 15 September ISIS has been attacking Kobanê with heavy weapons and armored units on three different fronts, forcing thousands of civilians to flee.


NEWS DESK - Thousands of people who marched to the Mürşitpınar border crossing as clashes have intensified on three fronts in Kobanê have crossed into Rojava, chanting the slogan "Bijî Berxwedana Kobanê" [Long live the Kobanê resistance].

According to the reports of an ANF correspondent at the border crossing, thousands of people including representatives of non-governmental organizations have entered Kobanê. Members of the YPG (People's Protection Units) have welcomed the people from North Kurdistan with slogans.

More people are continuing to cross the border.

According to East Kobanê Public Order chief Mustafa Dadalî, Turkish soldiers on the northern side of the border opened fire on YPG fighters in the village of Alişar in East Kobanê on the evening of 25 September.

It is reported that after fierce clashes between YPG forces and ISIS gangs in Alişar village on 25 September, gang members who were unable to advance crossed the border and then re-entered Kobanê. As this occurred Turkish troops opened fire on a vehicle carrying YPG fighters. The YPG forces suffered no casualties and did not return fire.

Dadalî said that on the same day a train stopped near Alişar village, where there is no station, and transferred weapons and munitions to the gangs.

Dadalî added that telephone and walkie-talkie communications had also been obstructed on the border. Since there is no Syrian system operating in the area, telephone communication is carried out through Turkish systems that have been blocked for the last 4 days, said Dadalî. He added that when the clashes intensified the blocking became more pronounced, and that the walkie-talkies used by the YPG had lots of interference and had not functioned.

NEWS DESK - ISIS members wounded in clashes are now being taken through the Azaz border gate for treatment in Kilis in addition to Urfa and Antep. In the last two days more than 100 ISIS members have been taken to Kilis for treatment.

ISIS members are also reported to be receiving treatment in Urfa and Ceylanpınar. According to local sources, wounded ISIS operatives are taken from the villages of Exterin, Dudyan and Çobanbey to Kilis.

They said: "The wounded of this group have been treated in Kilis for a long time. They used to take them to Urfa and Ceylanpınar, but now that has been revealed they treat them here. Not just operatives wounded in this area, but those wounded in other parts of Syria began to be brought here for treatment. In the last two days more than 100 have been brought through the Bab El Selami gate and sent to Kilis for treatment."

The same sources said that the wounded were said to be members of Al Nusra, adding: "The wounded are brought here, their beards are shaved off and they are handed over to the Al Nusra Front. Although Al Nusra are not involved in any fighting, they send them to Kilis as if they are their own members. And from there those with serious injuries are transferred elsewhere."


https://www.reddit.com/r/Anarchism/comment...
§Trying to open turkish border to get into Kobane and let refugees out
by C Saturday Sep 27th, 2014 7:27 PM 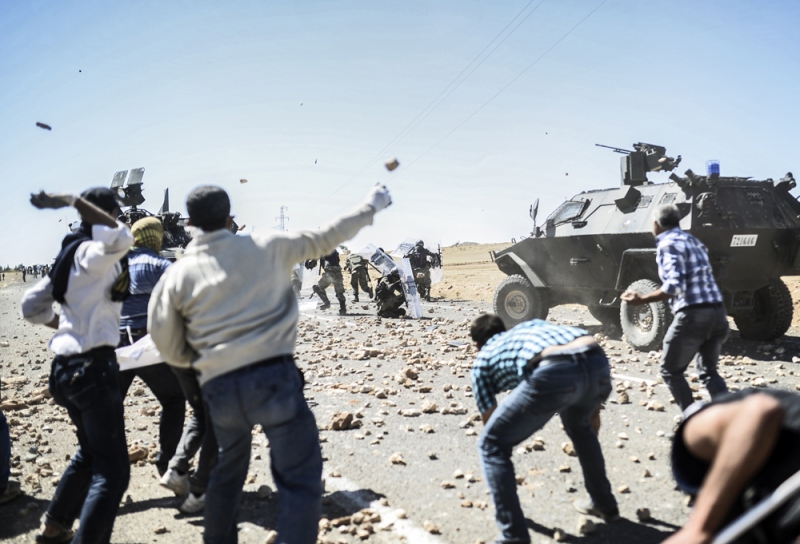 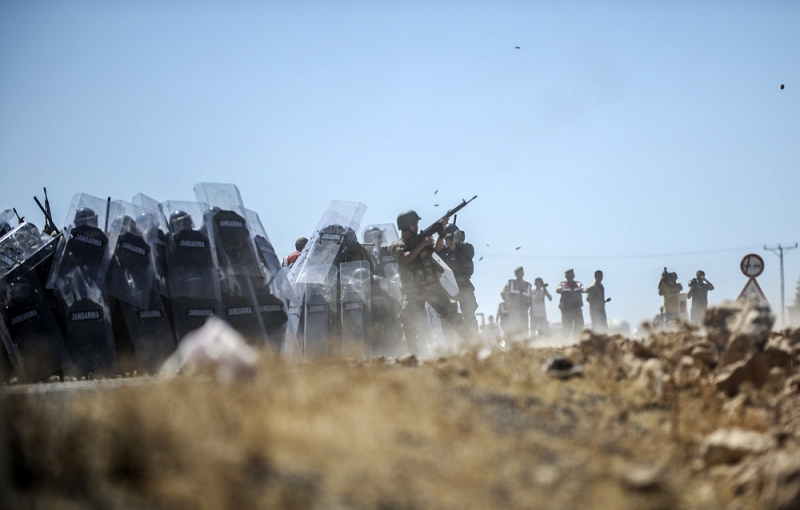 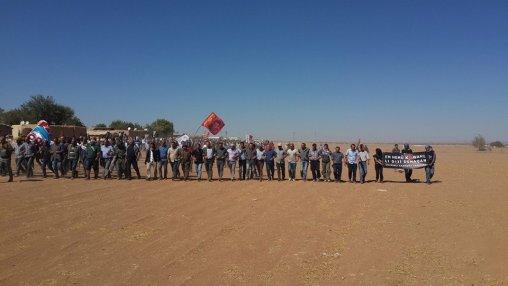 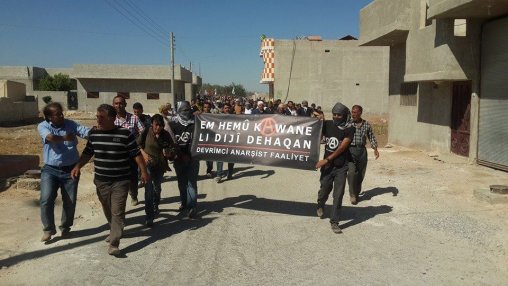 In Kobane
https://www.reddit.com/r/Anarchism/comment...
Add Your Comments
LATEST COMMENTS ABOUT THIS ARTICLE
Listed below are the latest comments about this post.
These comments are submitted anonymously by website visitors.