Trucks Dumping Fill are Shut Down at the site of the under-construction Caltrans Willits Bypass in Mendocino County.

The Native participants, from Coyote Valley, Sherwood Valley, Potter Valley and the American Indian Movement entered the construction site with the AIM flag, banners and drums for prayers and direct action in conjunction with local environmental activists. 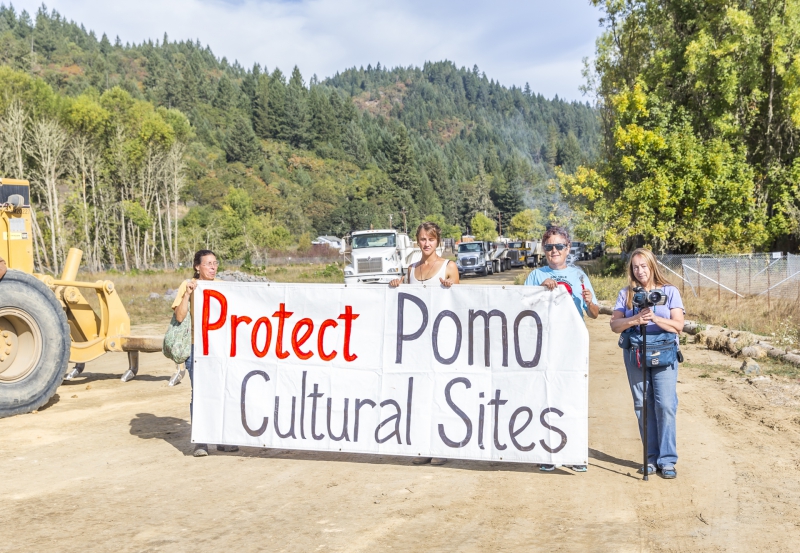 original image (1920x1329)
Native American Tribal members, including direct descendants of the Pomo peoples who once populated the Little Lake Valley where Caltrans is currently building an oversized freeway Bypass, joined environmental groups in a powerful protest on the north end of the highway project today. Protestors entered the construction zone north of town in the early morning hours, stopping the fast and furious flow of dirt-filled, double-belly dump trucks that have been working from dawn to dusk to cover the wetlands and archeological sites the activists seek to protect.

Elders and spiritual leaders from local Pomo Indian Bands and the American Indian Movement (AIM) lead the way to threatened cultural sites where prayers were offered for the ancestors. The AIM flag and drum were present near the construction area where Native American cultural artifacts have been discovered. The sites have been documented and fenced off by Caltrans, but are still slated to be destroyed by being permanently graded and buried under the Bypass as currently designed.

“I hear and feel our ancestors cry to save our villages from destruction. The white man’s history repeats itself. We pray that the Creator will hear our prayers”, said Priscilla Hunter, tribal representative for the Coyote Valley Band of Pomo Indians. “Caltrans placated the interests of local ranchers by giving them permanent grazing rights on the mitigation lands and built the viaduct over the railroad track to preserve it, but yet they don’t listen to the Indians’ concerns for protection of our ancestors’ culture or to our call for downsizing the northern interchange to avoid a large village site.”

The Coyote Valley Tribe requested government to government consultations with the Army Corps of Engineers in June, but to date has received no response. Hunter stated that Caltrans was likely in violation of the Clean Water Act 404 Permit General Condition # 3 which specifically references the protection of archeological sites and Section 106 of the National Historic Preservation Act. At this time, Caltrans has refused to provide any further information about the recent cultural findings to Hunter.

The Coyote Valley Band of Pomo Indians letter to the Army Corps of Engineers and their Resolution for Government to Government consultation can be found here.

Over thirty additional sites and more than one hundred artifacts have been identified since Bypass construction in the valley began. One site is thought to be the ancient village site of Yami. After initially assuring the Sherwood Valley Band of Pomo that construction on this large, known site would be avoided, Caltrans destroyed the village completely in the summer of 2013. Equipment operators did not stop work and did not notify the Tribes, as required. Caltrans admitted the destruction months later, calling it "accidental” and blaming faulty maps. Artifacts in Little Lake Valley are so plentiful it has been described by archeologists as an Archeological District.

Some of the cultural sites being “discovered by bulldozer” are on the so-called mitigation lands, acres Caltrans is relying upon to compensate for environmental damage to public values, called “temporal loss”. When cultural sites are identified, the area is set aside, reducing the acreage available for mitigations. Caltrans needs every acre of scarce mitigation land to make up for the temporal losses already incurred by its chronic failure to perform mitigation measures now two years overdue.

Bypass opponents have proposed a smaller, lower impact design to reduce the amount of mitigation lands needed to satisfy requirements that would also save time money as well as some 30 acres of wetlands while avoiding cultural sites. Caltrans had committed to finding ways to reduce the amount of fill used on the northern interchange as one of the conditions of reinstating its previously suspended 404 Operating Permit under lead agency Army Corps of Engineers. Caltrans has proposed only a minimal 3.5 acre reduction carved from minor design adjustments, without evaluating other, less destructive options.

The Coalition to Save Little Lake Valley and others including Earth First!, the Willits Environmental Center and Bay Area Coalition for Headwaters are demanding an immediate halt to all fill activities on the northern interchange pending a significant reduction of impacts to protect both wetlands and cultural sites.

photo by Steve Eberhard, Willits News
http://savelittlelakevalley.org
Add Your Comments
LATEST COMMENTS ABOUT THIS ARTICLE
Listed below are the latest comments about this post.
These comments are submitted anonymously by website visitors.