Add an Event
Newswire
Calendar
Features
Home
Donate
From the Open-Publishing Calendar
From the Open-Publishing Newswire
Indybay Feature
Publish to Newswire
Add an Event
Related Categories: Santa Cruz Indymedia | Health, Housing & Public Services | Police State & Prisons | Racial Justice
Report from SCPD Corner
by Robert Norse
Wednesday Sep 17th, 2014 9:55 PM
After some lively debate, the HUFF meeting voted to endorse a "mellow" but visible presence on the corner of Laurel and Center Streets in front of the SCPD parking lot. We wanted to go forward with the presence near the SCPD to encourage the rest of the community that our police are not above criticism and accountability--or should not be at any rate. And that we and others should not be afraid to expose the nightly abuse homeless people suffer and the racial profiling that many blacks & Latinos I've spoken to quietly acknowledge happens here in "liberal" Santa Cruz. 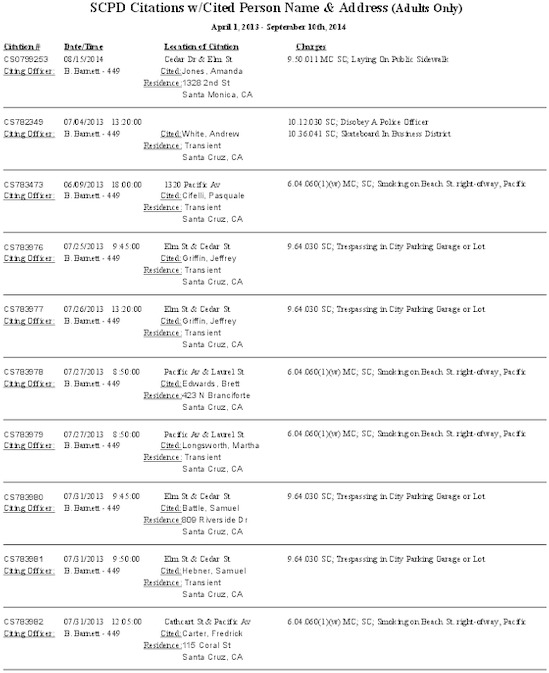 Download PDF (172.3KB)
RACIAL PROFILING? COME BACK NEXT WEEK.
Our initial impetus for the road trip to the SCPD HQ was to search citations by Officer Barnett for race. Our goal was to see if he had found a crime wave for such public safety hazards as "smoking in a no smoking zone", "trespass in a public parking lot", "panhandling" "sitting within 14' of a building". And whether such citations disproportionately targeted homeless and minority people. I"ll be posting a link to Barnett's citation history (such as we have--with race excluded) shortly. wit

Since the race of Barnett's victims is curiously absent from the document, I e-mailed Jacqui Dressler, the SCPD Records worker, that we wanted to research the records "by hand" today as she said was required--since the SCPD was declining to provide the information more easily in a summary form. She then advised us that the hard-copy citations of Officer Barnett would not be available for viewing until next week (without any explanation as to why this would be the case). In response, some HUFF members wanted to wait until next week to invite more of the community and come back with greater numbers and consensus, perhaps with greater outreach to the news media.

Some of us were enthusiastic about an action today. We wanted to go forward with a small but visible and vocal presence near the SCPD to encourage the rest of the community that our police are not above criticism and accountability--or should not be at any rate. And that we and others should not be afraid to expose the nightly abuse homeless people suffer and the racial profiling that many blacks & Latinos I've spoken to quietly acknowledge happens here in "liberal" Santa Cruz.

SIDE RANT
It seems important to me to bring concerns out of the closet. To verbalize and publicize them. It is my view that there has been far too much adulation of mediocre or just plain bad officers (such as Loren "Butchie" Baker) because they were shot on the job. And their deaths used as a pretext for the Public Safety Scare of the last two years.

We've seen the increased militarization of the police--in the military style attack on the San Lorenzo Campground and on peaceful protesters at Occupy 2 years ago. We've sat by while the SCPD's successfully denied at-risk youth bicycles previously distributed by the Bike Church in 2012.

There has been no outrage at the failure of the SCPD to respond candidly to video-ed incidents like Officer Vasquez's face-first drop of Richard Hardy to the sidewalk. A phony Needlemania agenda has born truly rotten fruit by driving Needle Exchange out of the City. These views are mine and may not represent those of other HUFFsters.

DEBATE AND THEN ACTION
After some lively debate, the HUFF meeting voted to endorse a "mellow" but visible presence on the corner of Laurel and Center Streets in front of the SCPD parking lot. Some members were unable to come because of the short notice and others wanted to take a more "wait and see" stance. Our focus was to raise a cry of anger at how homeless people are being attacked (property confiscated, dignity trampled, campsites destroyed). The issue of racial profiling has also taken the front burner both because of the Ferguson fury and recently reported instances of apparent racial targeting here in Santa Cruz.

HITTING THE SIDEWALK
Half a dozen of us made our way there around 2 PM finding shade on both sides of the corner there. We set up Cafe HUFF with coffee, brownies, flyers, and signs in the well-traveled spot and were pleased to find an indybay photographer Alex Darocy there to be joined by several other HUFFsters.

The honks and positive indications from passing cars were surprisingly numerous. Initially impassive drivers when directly addressed at the stoplight there willingly (and in some cases eagerly) took the flyers. Seeing our "Don't bring Ferguson to Santa Cruz" and "Stop Harassment of Homeless and Minority People" signs brought thumbs-up signs, folks rolling down windows in support, and even a cop or two reacting to the cry of "Jail Drug Dealers Not Homeless People". Latino city workers gave thumbs up from their passing vehicles.

A car full of black passengers responded to my "Too Many Cops" with "That's Right!". Almost everyone approached with a flyer on the sidewalk passing by took one; some stopped to sign up in support or to volunteer.

THE MINORITY VIEW
There were few critics. Mike, a homeless man, insisted that the only homeless people harassed were those who "disrespected" Santa Cruz. The rare "get a job" growl did roll out of one car. One driver was overwhelmed with rage at our protest, but declined to get out and be interviewed. I did a number of interviews which I'll play tomorrow at http://www.freakradio.org at 6 PM. The show will archive at http://www.radiolibre.org/brb/brb140918.mp3 .

There were numerous sign-up's to support Encampment Protection (see volunteer list above). "Push Back" Pat did note one police officer giving her the finger, and went inside SCPD central after the protest to help the officer find decorum training. "Security" thugs passing by across the street declined to come over and join us for coffee and "eat 'em don't beat 'em" Brownies.

We received no smiling "Move Along--Your Hour Is Up" message from the Happy yellow-jacked Hosts. First, because they don't patrol that area, and second because the area itself is outside the sacred commercial zone where MC 5.43 applies. Council candidate Leonie Sherman briskly strode by, declining to stop and check out our literature, but promising to return e-mails (as she has, actually, though with no agreement to move against the criminalization of the homeless).

AT THE END OF THE DAY
The weather was agreeable. The response was positive particularly from Latino folks driving by, students walking by, and the majority of homeless folks trudging by. The Cafe HUFF Coffee and Pat's "Beat me not!" brownies were nearly gone when the protesters packed it in an hour and a half after they began, pretty satisfied with the results.

After doing an interview at the doors of the police station, I found still posted on the door was a sign advising the community of the outrageously limited police hour when police would return property seized during Sleepcrime and other Anti-homeless arrests: 12:30 to 2:30 PM every Tuesday and Thursday.

RETURN ENGAGEMENT?
If HUFFsters (or others) are so inclined, I encourage a return engagement to the corner at Laurel and Center next to the police station. Hopefully we won't find "anti-loitering" devices such as the high-pitched "Homeless Control Through Eardrum Agony" boxes appearing. Described at http://www.ksbw.com/news/central-california/santa-cruz/santa-cruz-installs-antiloitering-noise-boxes-along-san-lorenzo-river-levee/27963780 , these devices have been set up at various the City without public hearing or notice. Scott Collins, Assistant to the Assistant City Manager has advised me that the location and number of these devices is "secret".

Join us in our next public appearance demanding SCPD accountability, or let us know when you're doing your own.
Add Your Comments
LATEST COMMENTS ABOUT THIS ARTICLE
Listed below are the latest comments about this post.
These comments are submitted anonymously by website visitors.