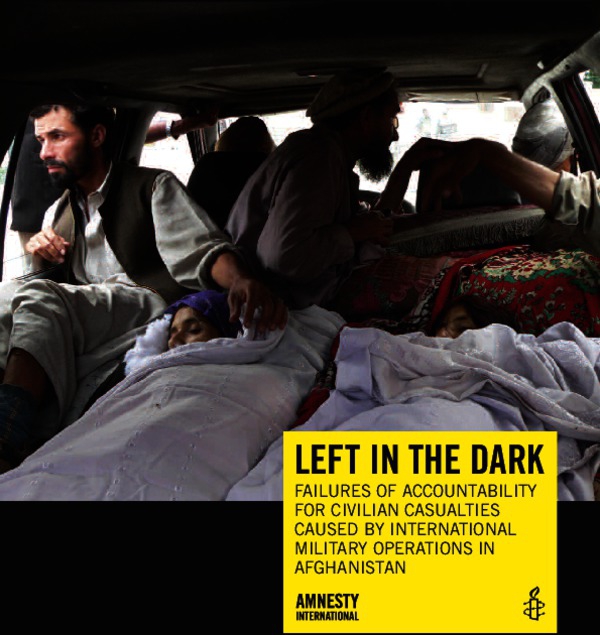 Download PDF (2.2MB)
A recent Amnesty International report documented how previous incidents where civilians were killed during US/NATO military operations have not been properly investigated. Incidents involving likely war crimes have not led to prosecutions.

“The lack of accountability for killings of civilians by US/NATO forces in Afghanistan sends a message that foreign troops have free rein to commit abuses in Afghanistan and that the lives of Afghan civilians have little or no value,” said Richard Bennett, Asia-Pacific Director at Amnesty International.

“We express our deep condolences to the victims of this airstrike, including the families of those who lost their lives. NATO and the US military must ensure that this airstrike is promptly, thoroughly and impartially investigated and that victims’ families are kept informed about the progress of the investigations.”

Villagers reportedly brought the bodies of their relatives to the provincial capital to show civilians had been killed.

Amnesty International’s report Left in the dark: Failures of accountability for civilian casualties caused by international military operations in Afghanistan, published in August, examined 10 cases involving more than 140 civilians who were killed during US/NATO attacks, none of which were properly investigated.

Formal criminal investigations into the killing of civilians by foreign troops in Afghanistan are extremely rare. Amnesty International is aware of only six cases since 2009 in which US military personnel have faced trial for killing civilians.

“Evidence of possible war crimes and unlawful killings has seemingly been ignored by the US. This needs to change. Accountability now is prevention in the future: these incidents simply should not be happening,” said Richard Bennett.

Background Information
Amnesty International spoke to Kunar provincial authorities, local journalists and villagers who said that at 13:30 on Tuesday a bomb dropped from a plane hit the area and killed four people.

When the villagers heard the bomb and rushed out to help the injured, another bomb was dropped. The villagers also said that after the bombing the plane started shooting, which increased the number of casualties.

According to local journalists and Kunar provincial authorities, a team of Afghan and international forces who were patrolling the area yesterday came under fire from insurgents.


Amnesty International
http://www.amnestyusa.org/
Add Your Comments
Support Independent Media
We are 100% volunteer and depend on your participation to sustain our efforts!