by Dan Bacher
An ongoing analysis of reports filed with the California Secretary of State shows that the oil industry, the largest and most powerful corporate lobby in Sacramento, collectively spent over $63 million lobbying California policymakers between January 1, 2009 and June 30, 2014. 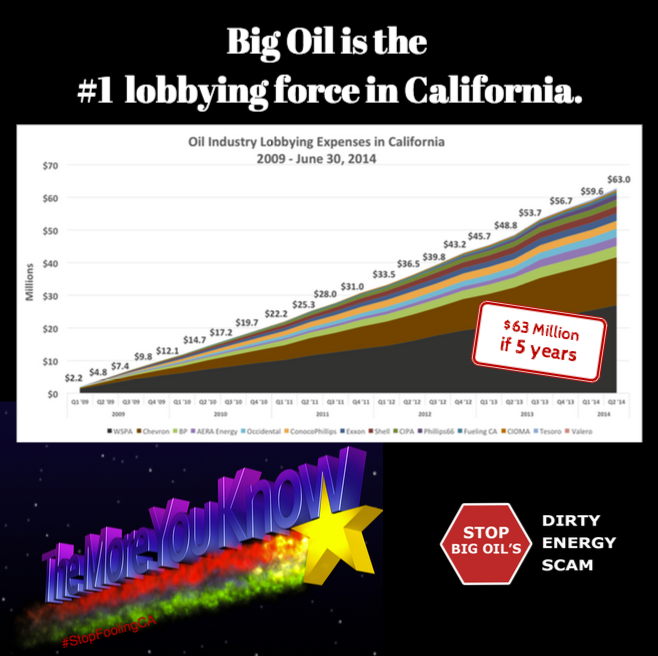 Only in a Big Oil state like California would a Legislator have to author a bill to ban offshore oil drilling in a "marine protected area."

And only in a Big Oil state like California would the Legislature vote against a bill to stop oil drilling in a "marine protected area."

That's right - State Senator Hannah-Beth Jackson’s bill to ban offshore oil drilling from an area of state waters in the Santa Barbara Channel known as Tranquillon Ridge stalled on the Assembly Floor on the evening of August 26, effectively killing the bill for the year, due to massive opposition by the oil industry.

The vote was 29-36, according to Senator Jackson’s office.

“If ever there were proof positive of big oil's stranglehold on the State of California, this is it,” said Joey Racano, Director of the Ocean Outfall Group. “Even our best attempt at providing some protections for our future fisheries and ecology swatted aside by big oil money and corrupt politicians. Another thing this proves is the reality of the military/industrial complex. Big oil is the US military, and the US military is big oil.”

“I’m disappointed in what happened tonight, but remain committed to protecting this area of our Santa Barbara coastline from the impacts of new offshore oil drilling for the long haul,” said Jackson (D-Santa Barbara). “I will continue to pursue avenues to protect Tranquillon Ridge, which inspires us with its beauty and biological diversity, and helps drive our local economy with tourism and hospitality jobs and thousands of visitors to our area.”

“I’m proud to be a co-author of SB 1096, because I believe that protecting our sensitive coastal habitat is of the utmost importance to our economy and our environment,” said Assemblymember Das Williams (D-Carpinteria). “I will continue to work with Senator Jackson to fight for those protections.”

The defeat of the bill shows the enormous power of Big Oil in California. While there are many powerful industries based in California, ranging from the computer and high tech industry to corporate agribusiness, no industry has more influence over the state's environmental policies than Big Oil.

"The oil industry is spending over $1 million per month lobbying Sacramento, with the Western States Petroleum Association (WSPA) as the second overall leading spender so far in 2014 with almost $3 million spent in the past six months," according to Stop Fooling California (http://www.stopfoolingca.org), an online and social media public education and awareness campaign that highlights oil companies efforts to mislead and confuse Californians. "Chevron, with $1.3 million spent so far in 2014, is also among the top five. If money speaks, Big Oil has the loudest voice in politics."

WSPA was California’s second overall leading lobbyist spender, with $1.5 million spent in the second quarter of 2014. This is the second largest quarter going back to January 2009.

Chevron is the fifth overall spender in California through the second quarter of 2014, having spent $784,757 over the past quarter, an increase of nearly $300,000 over the prior quarter.

Yet these millions of dollars are just chump change to Big Oil, since the five big oil companies made over $93 billion in profits in 2013. This year their estimated profits to date are over $64 billion.(http://www.americanprogress.org/issues/green/news/2014/02/10/83879/with-only-93-billion-in-profits-the-big-five-oil-companies-demand-to-keep-tax-breaks/)

But a loophole in state law left Tranquillon Ridge, which extends into state and federal waters, with reserves that are currently being tapped in federal waters from Platform Irene, uniquely vulnerable to offshore drilling. Senate Bill 1096 would have repealed this loophole, found in Public Resources Code 6244, according to a statement from Jackson’s Office.

“'Even the slightest chance of an oil spill in a Marine Protected Area far outweighs any potential benefit to the state,” Jackson said. (http://sd19.senate.ca.gov/news/2014-08-26-jackson-bill-ban-offshore-oil-drilling-tranquillon-ridge-stalls-assembly-floor#sthash.P1b97qOx.dpuf)

The second loophole is in the privately funded Marine Life Protection Act (MLPA) Initiative that created the Vandenberg State Marine Reserve and other “marine protected areas” in California waters.

Fishermen, Tribal leaders and grassroots environmentalists have repeatedly criticized the controversial MLPA Initiative for creating questionable "marine protected areas" that fail to protect the ocean from oil drilling, fracking, pollution, military testing, corporate aquaculture and all human impacts on the ocean other than fishing and gathering.

In one of the most overt conflicts of interest in recent California history, Catherine Reheis-Boyd, the President of the Western States Petroleum Association, chaired the MLPA Initiative Blue Ribbon Task Force to create alleged "marine protected areas" in Southern California. Reheis-Boyd, who is leading the campaign to expand fracking and offshore oil drilling in California, also served on the task forces to create "marine protected areas" on the Central Coast, North Central Coast and North Coast.

The Coastal Justice Coalition, a group of members of the Yurok, Hoopa Valley, Karuk and other Tribes who agree that the State of California has no right to regulate tribal gathering, exposed this loophole in the MLPA Initiative when they stated, "Protected areas would allow for deep water drilling yet would ban tribal gathering," in a news release issued in June 2010. (http://www.indybay.org/newsitems/2010/06/29/18652206.php)

While MLPA Initiative officials let the oil industry, corporate polluters and ocean industrialists off the hook in their strange concept of "marine protection, oil drilling would have been banned in one state marine protected area, the Vanderberg State Marine Reserve, if Jackson’s bill had passed.

On September 28, 1997, a discharge of at least 163 barrels of crude oil occurred from a rupture in a 20-inch offshore pipeline emanating from Platform Irene off the Santa Barbara County coast near Vandenberg Air Force Base, according to the California Department of Fish and Wildlife.

The spill resulted in the fouling of approximately 17 miles of coastline, and caused an impact to a variety of natural resources, including seabirds, sandy and gravel beach habitats, rocky intertidal shoreline habitats, and use of beaches for human recreation (https://nrm.dfg.ca.gov/FileHandler.ashx?DocumentID=17442&inline=true).

Need for bill shows the failure of MLPA Initiative

Zeke Grader, Executive Director of the Pacific Coast Federation of Fishermen’s Associations (PCFFA), praised Senator Jackson for sponsoring the bill - and said the necessity of having to sponsor a bill like this to protect a marine protected area from oil drilling "highlights what a failure the MLPA Initiative was.”

“If these are true marine protected areas, they why are we allowing drilling and other insults to the ocean in them?” asked Grader. “The whole MLPA Initiative was a phony process that provided an opportunity for Big Green and government bureaucrats to write press releases claiming these were ‘protected areas’ when in reality the fishermen and Tribes got screwed. We should have bans on oil drilling in all of the marine protected areas."

The time to ban offshore oil drilling, fracking, pollution, corporate aquaculture, military testing and other harmful activities to marine life in all "marine protected areas" created under the MLPA Initiative is long overdue. The oil industry's inordinate influence over the MLPA Initiative and other environmental processes, the Legislature and the Governor's Office is due to the enormous amount of money that the oil industry dumps into campaign contributions and lobbying in Sacramento every year.

Ironically, while WSPA President Catherine Reheis-Boyd served on the task forces to "protect" the ocean, the same oil industry that the "marine guardian" represents was conducting environmentally destructive hydraulic fracturing (fracking) operations off the Southern California coast. Documents obtained under the Freedom of Information Act and media investigations by Associated Press and truthout.org reveal that the ocean has been fracked at least 203 times in the past 20 years, including the period from 2004 to 2012 that Reheis-Boyd served as a "marine guardian.” (http://www.usatoday.com/story/money/business/2013/10/19/calif-finds-more-instances-of-offshore-fracking/3045721/)

"The set up is basically this: some Californian (who is supposed to be your proxy) regurgitates Big Oil talking points that don't resemble reality, equating protecting Big Oil's profits with protecting the people," according to Stop Fooling California.

Vandenberg State Marine Reserve (SMR) is a marine protected area (MPA) located offshore of Vandenberg Air Force Base, near the city of Lompoc on the Central Coast. The MPA covers 32.84 square miles.

Add Your Comments
Comments (Hide Comments)
§Peace and Freedom Party of California North State Organizer
by C. T. Weber
This was a real eye opener for me. I had thought that California banned off shore oil drilling. Of course, the devil is always in the details and I must admit that I was fooled by this misleading Act. And now many of the so called environmentalist will be supporting Jerry "fracking" Brown for Governor. With this Top Two general election system, we have no choice this Noverber.
Add a Comment
Support Independent Media
We are 100% volunteer and depend on your participation to sustain our efforts!