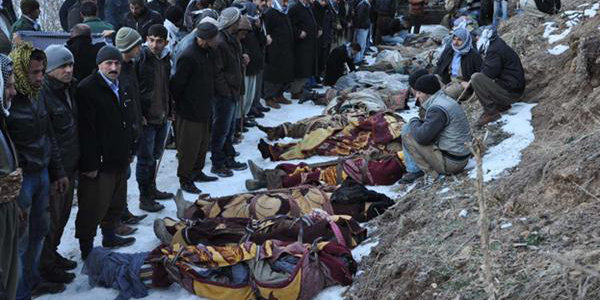 (1Sept14) We now know that a massacre of 40 Kurdish workers on December 28, 2011 was accomplished with aid from the US. Tracking courtesy of NSA was revealed by Edward Snowden, and published by Der Spiegel on Sunday. PM Erdogen understands how to declare his political opponents as "terrorist' and have them vanquished by the US.

News coverage of these massacres was sparse, an English version of the original source (from atik-online.net) is no longer available, and the original reporters are missing so it's reproduced in full here.

ATİK | 03 – 01 – 2012 | The fascist Turkish state is continuing the massacres against the innocent Kurdish nation by means of chemical weapons. In the village of Roboski of Şırnak Uludere province 40 innocent people have been massacred in bombings by war planes. In the warmongering statement after the last MGK (National Security Council) meeting, the practical implementation of the statement “The operations will continue day and night” was that, civilian peasants have been brutally killed through air bombings. We are carefully awaiting to know what the AKP government will fabricate with regards to the massacre under their responsibility while they are claiming to be against the massacres of the Khadafi regime in Libia, the Esad regime in Syria  and also calling upon and threatening  Esad to seize the massacres.

Forty peasants from Ortasu (Roboski) in the Uludere region,  between the ages of 15 to 20 who were returning to their village from where they had been working were brutally killed by F-16 war-craft bombings. According to the statement of the wounded peasants who survived the bombings,  “When we came back the jets started bombing us. A bitter smell was in the air during the bombing. Suddenly people started to burn and were killed. 5-6 people hid between the rocks to escape the bombing. The airplanes have also bombed there. They all died there at the rocks”. As a result of the bombings large number of burned and mutilated corpses of many people were taken to the county.

The policy of destruction and denial against the Kurdish nation since the founding of the Turkish Republic State is continuing with massacres and mass arrests. Racism is being instigated in all layers of society by imposing the mentality of any Kurdish in movement is ‘guilty’. Within the last month, lawyers and journalists have been arrested, detention periods have been prolonged, their homes and offices have been raided, extrajudicial executions, mass killings have taken place. These are a continuation of the atrocities of the nineties in a different form.

Turkey that has a history filled with massacres has added a new one to its history. The Turkish state killing, massacring forty very young people at Şirnak Uludere, will opt to deny this massacre in all its forms, they have already started making various statements.

As ATİK we strongly condemn this open massacre and the atrocities which took place in Roboski and extend our condolences to the families of those killed.   We will not allow this massacre to be covered up, by widely exposing this crime against humanity and its atrocities by the Turkish state, we declare that we will carry our reaction against this massacre out on to the streets in all areas.

Long Live The Self Determination Right of the Kurdish Nation!

The future of radio comes not from the Tower of Corporate Media. It now belongs to us.  bring the ruckus to Facebook:  http://facebook.com/IndyRadio Playlists from Indyradio appear at http://rd0.org

The results of NSA tracking are seen in top photo. Proof is in the recently released documents linked at Der Spiegel, the source of this screenshot.
https://indyradio.info/content/nsa-helped-...
§The archived story has moved, with updates
by David Roknich/IndyRadio Thursday Nov 12th, 2015 5:31 PM
This is the correct address. The one given in the post above is only available at the site that starts with www - indyradio.info without the www is a different site.

we're still funding the genocide of the Kurds, even as you read this.
https://www.indyradio.info/content/nsa-tra...
Add Your Comments
Support Independent Media
We are 100% volunteer and depend on your participation to sustain our efforts!