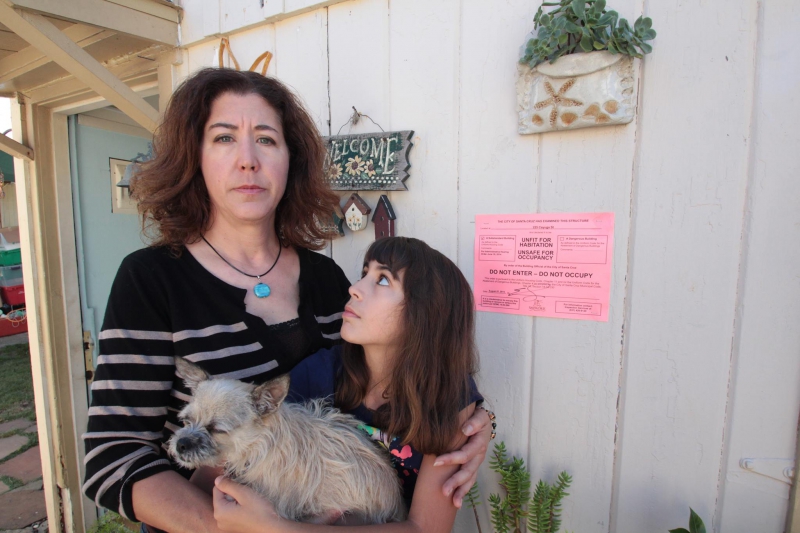 original image (2048x1365)
[ Photo: Paula and her daughter Isabella stand in front of their cottage home on Cayuga Street in Santa Cruz. The cottage, and a house in front, were purchased by Paula's parents in 1982. ]

Rents in Santa Cruz have been high since the late '90s. But now, thanks to a City program to red-tag and evict residents of "accessary dwelling units" (granny units) that do not meet every detail of the City's overly complicated building code, rents have reached a new level of ridiculousness. The City is doing this as part of a deal with UCSC. UCSC currently charges $1671 per month for HALF a shared dorm room plus food. No, that is not a typo. But it is one of the reasons students are graduating $40,000 in debt (or more!) with no job prospects.

Frustrated by students renting rooms and granny units off campus, UCSC, rather than looking at their own bureaucratic stupidity and excessive red tape, cut a deal with the City of Santa Cruz. The City evicts tenants from perfectly habitable granny units on technicalities. In exchange, UCSC gives the City reimbursement for the cost of the program.

All this occurs in the middle of a nationwide rental crisis. The foreclosure victims have been pushed into the rental market, and there are not enough rental units to house both them and the existing renters. The resulting shortage has pushed rents to a level that's many working people simply cannot afford, even with two (or even three!) jobs.

Here in Santa Cruz, it's particularly bad. Studios are renting for $1000 and up. Two bedroom apartments are $1500 and up. Watsonville isn't any cheaper. Teachers, artists, activists, car wash attendants, supermarket checkers, the people who make our town RUN cannot afford to pay these rents. Home ownership remains out of reach, unless you happen to have $600,000 dollars. We are drowning.

To make matters worse, predatory speculators are attacking our town, purchasing buildings and evicting all the tenants, in order to jack up rents after a quick "remodel". The speculators make a quick buck at the expense of others. The tenants, after being cruelly ripped from the homes in which we have lived for years or even decades, are cast out into the worst rental crisis in a decade. Some, after a desperate scramble and a lot of luck, find other housing. Many do not. I myself lost my apartment to such a speculator on June 14th, and have left the City of Santa Cruz after 22 years of residency. I still live in the County, but that is temporary.

Here we rally to save one person (and her daughter) in one granny unit. Perhaps if we can help this one person, that will start the ball rolling to save others. Paula, the popular teacher, mom, and PTA president has lived in the cottage on her parents' property for 22 years without difficulty. Now, thanks to the City's UCSC backed eviction program, she has received notice to be out on September 1st or face massive fines. Paula has spoken before City Council and has actually generated a lot of sympathy from public officials, so we may have a chance to save her home.

Help Paula and help YOURSELF by LIKING "Save Paula's Cottage" on Facebook and SHARING as widely as possible. If you live in Santa Cruz County and do not own your home, you may be next, no matter how good of a tenant you are, or how long you have lived there, or how "cool" you think your landlord is. So let's fight back against this now, while there are still enough of us left in Santa Cruz to do so.

Stand Up at City Council to Save Paula's Cottage

We are gathering at City Hall at 5pm to appeal to City Council to spare Paula's home and halt Santa Cruz's destructive rental inspection policies before we lose any more friends to the housing market. Some city officials are already on our side.

You don't have to speak, just get to City Hall to show our community's support of Paula.
https://www.facebook.com/savepaulascottage
§The Sweet Little Cottage & Additional Information
by Save Paula's Cottage! Wednesday Sep 3rd, 2014 11:35 AM 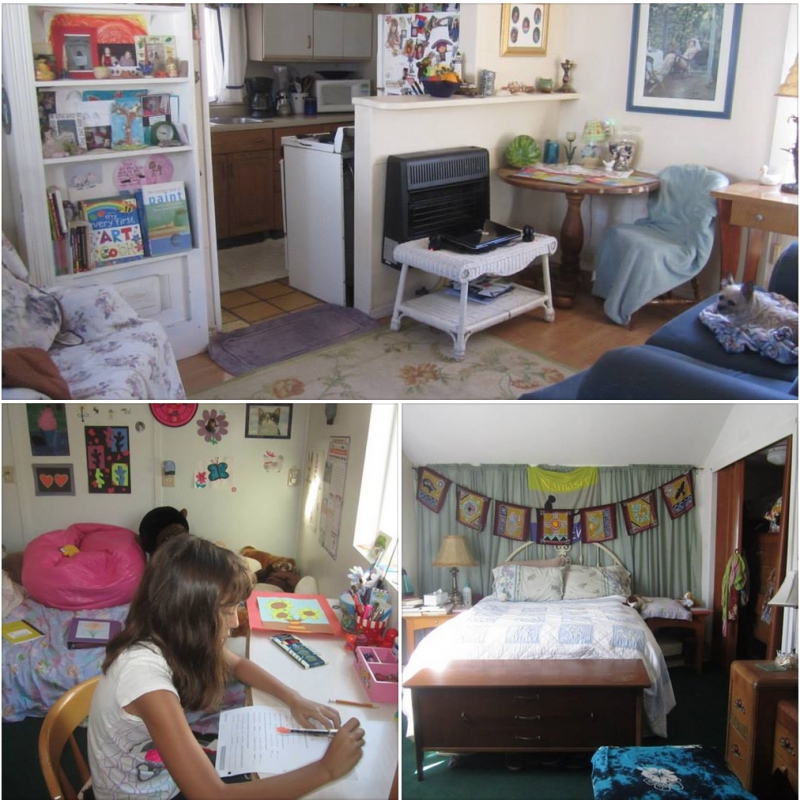 original image (1012x1012)
Inspectors, under the Santa Cruz Rental Inspection Program, are evicting families from safe homes and forcing property owners to turn these perfectly good homes into garages. Despite complying with all of the health and safety recommendations, my parents have been denied the proper permits necessary to "legalize" our home. My ten year old daughter, our dog Lulu and I have been ordered out immediately by the planning department or else my parents will be fined a hundred a day.

Our property lot size does not conform to current lot size restrictions regarding multi-units, therefore, zoning regulations are being enforced to destroy our home- and many like ours- throughout Santa Cruz.

An emergency moratorium must be passed in order to stop abatement efforts and the requirement of garage conversion. The Council should pass an amendment which legalizes unpermitted homes if they pass all safety codes. They can be deemed pre-existing non conforming. The priority should be about saving our homes in order to keep people warm and toasty, not displacing us in order to keep cars warm and toasty!

One by one, these sweet little cottages are being put on the chopping block, tenants are being kicked to the curb and Santa Cruz's rental properties are disappearing unceremoniously into the sunset.

Our cottage has many beloved memories and has been occupied without issue or incident for over 32 years. An appeal has been filed to stop administrative action and demolition temporarily. Please help save the only home which my daughter has ever known!

Join the conversation. Share your thoughts or experiences dealing with the Rental Inspection program. Share our story, thus applying pressure on the Santa Cruz City Council members to do the ethical thing and save homes like ours..
https://www.facebook.com/savepaulascottage
Add Your Comments
LATEST COMMENTS ABOUT THIS ARTICLE
Listed below are the latest comments about this post.
These comments are submitted anonymously by website visitors.